“POSCO the Great”: Loved by the people and admired by the world 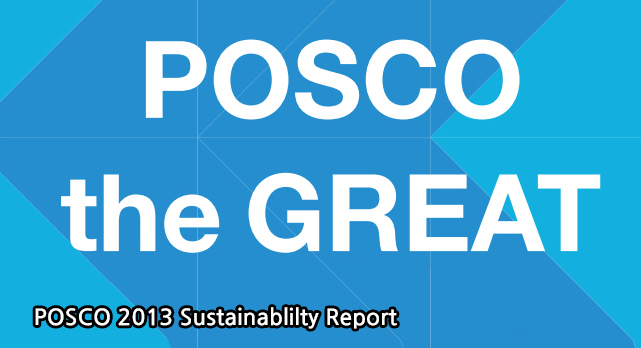 POSCO was recently named by WSD as the world’s most competitive steelmaker for the seventh time in a row during the past five years. Apart from receiving credit for technological innovation and human resource management, POSCO has also been making continuous socio-economic and environmental efforts side by side with its stakeholders to create value and bolster mutual growth. The recently published 11th annual sustainability report sums up these efforts. Let’s have a closer look.

About the 2013 Sustainability Report 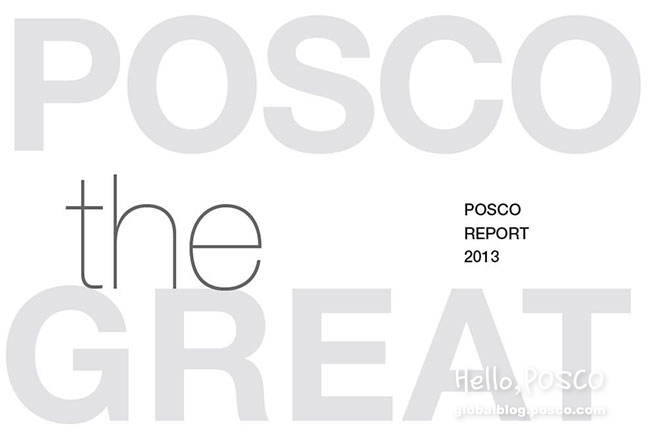 First, the Report includes both financial and non-financial data.

POSCO and listed subsidiaries within the POSCO Family*, or those having more than KRW 1 trillion in sales are included in the consolidated ESG(environment, society, governing structure) data, which was verified by Samil PricewaterhouseCoopers.

Second, we report ‘Key Issues’ which have high ranks in the materiality test.

The report also includes specific information on the issues selected from the materiality test in order to include detailed information that the stakeholders want to know.

Third, we gathered the opinions of internal and external stakeholders and reflected them in the materiality test before publishing this Report.

Fourth, we reported the cases of CSV (Creating Shared Value), ‘a management principle that seeks opportunity for business in solving social problems’.

Period of reporting
POSCO publishes the report annually. This Report contains information from January 1st, 2013 to December 31st, 2013. In some instances information up to April 2014 were included. The corporate governance section is based on the decisions made by the Board of Directors at the meeting held on March 14, 2014.

Scope of reporting
The Report contains the sustainability activities and performances of Pohang Steelworks, Gwangyang Steelworks, Pohang headquarters and the Seoul office. The ESG (Environment, society, governing structure) data covers POSCO and nine POSCO subsidiaries that are listed in the stock exchange or have more than KRW 1 trillion in sales. Information on shareholders, investors, and new green growth businesses cover the whole POSCO subsidiary.

Why don’t we take a look at what efforts POSCO made during the year 2013, and their results? 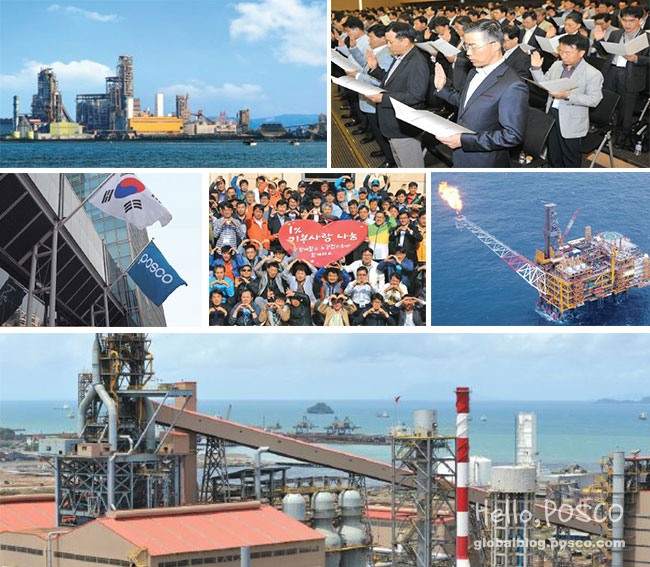 On February 1, POSCO was named “The World’s Most Competitive Steelmaker” for the fourth time in a row. This was the result of the evaluation conducted by WSD (World Steel Dynamics) on 34 of the world’s steelmakers in 23 categories including production capacity, profitability, and technology innovation. POSCO had held the top position from 2002 through 2004, then was surpassed by Russian and Indian steelmakers, but regained top spot again in 2010 after 6 years, and has hence remained no.1 for 4 consecutive years.

On June 22, Daewoo International successfully began production at the Mya gas field, located in the northeastern sea of Myanmar. The Myanmar gas field project came in full swing when Daewoo International signed a PSC with the Myanmar Government. The gas produced was passed through the subsea pipeline, subsea production facility, and the production platform to check the gas production and treatment facility, and began selling to CNPC, a Chinese state-owned petroleum company from the gas selling location in Kyauk Phyu, west of Myanmar, since July 2013!

Celebrating the 10th anniversary of the proclamation of POSCO’s Code of Conducts, POSCO held a declaration ceremony for the New Ethical Management principle. The new principle, dubbed “Happiness Management” presents the vision “Let’s Come Together to Build a Better World!” and its 3 core values – future, common good, and win-win.

5. POSCO INCLUDED IN THE SUSTAINABILITY INDEX FOR NINE CONSECUTIVE YEARS!

For the first time in the steel industry, POSCO was included in the Sustainability Index by SAM-Dow Jones as a leading company for 9 consecutive years! In the 2013 evaluation, 31 steelmakers were evaluated, and POSCO received 77 points – 3 points higher than the previous year – and was selected as an outstanding company for the 9th consecutive year. 😀

POSCO’s 1% Foundation was officially inaugurated on November 18. The 1% Foundation was first started in October 2011, where executives and management-level personnel donated 1% of their salaries. POSCO and 26 POSCO Family companies participate in the campaign. The Foundation will implement sharing campaigns using the KRW 4 billion’s worth fund raised through donations during 2013 and the company’s matching grant.

POSCO’s vision is to become a company “loved by the people and admired by the world.” As CEO Ohjoon Kwon promised in his foreword to this report, POSCO will fulfill its duties and obligations as a corporate citizen. As a company built upon the very wishes and aspirations of the nation, POSCO will remember that it is forever in debt to the people and act accordingly. From the endeavors in preserving biodiversity to sharing with those in need through the 1% foundation, POSCO’s corporate philosophy will always be about the betterment of humanity.Thank you.