POSCO is starting to visible positive results in the global export of its self-developed new steelmaking technology, FINEX.

On the 22nd September, POSCO signed a memorandum of agreement (MOA) with Chongqing Iron and Steel Company in China for the construction of a 3 million ton capacity FINEX integrated steelworks.

At the signing ceremony, POSCO CEO Chung Joonyang and Chongqing Mayor Huang Qifan were in attendance, with the MOA being signed by POSCO President Kim Junsik and Chongqing Iron and Steel Company President Zhu Jianpai.

The MOA will see POSCO and Chongqing Iron and Steel Co. both invest equally to construct a 3 million ton capacity FINEX integrated steelworks. The MOA follows the signing of the FINEX collaboration MOU in July, 2011, and is the product of a feasibility review that was carried out during the intervening two years. The main agreement is expected to be signed by the end of the following year after ratification by the Chinese government and approval for technology export by the Korean government. 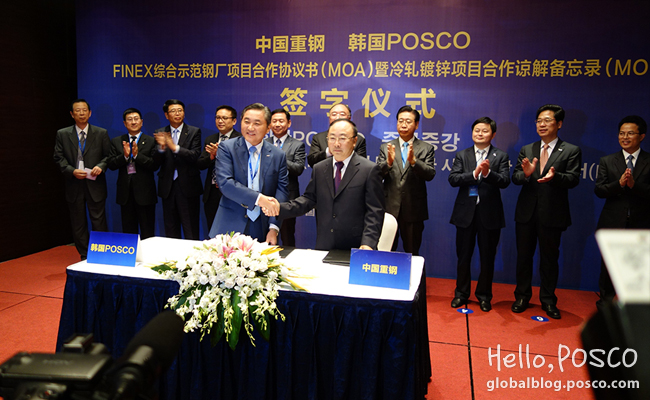 FINEX was successfully commercialized at a 1.5 million ton scale by POSCO in 2007, the product of 15 years of research, and is POSCO’s unique new steelmaking technology in construction, with a 2 million ton scale.

FINEX is a game-changing technology for the steel industry, where ‘melted iron is produced in the furnace,’and is already making its mark in the global history of steelmaking. It is viewed as a next-generation innovative steelmaking method unparalleled in the industry, as competitors with histories spanning centuries in steel-making have been unable to perfect it.

What’s more, FINEX reduces investment costs when compared to existing furnaces by removing the coke and sintering processes which preliminarily process the materials in the existing furnace. A further benefit is that it is environment friendly, reducing pollutants such as sulfuric oxides by 97%, nitric oxides by 99%, and fugitive dust by 72%.

Additionally, more than 80% of the iron ore can be used in powder forms less than 8mm in diameter which are more than 20% lower in cost, reducing production costs as well.

With the MOA to export FINEX technology, POSCO has seized the initiative by planting itself firmly as a new steelmaking technology exporter. This marks a dramatic improvement achieved over the past half-century, from being previously a fast follower of leading overseas steel companies in steelworks operation. The company can now also add technology export to its business portfolio, showing that it can operate successfully in markets outside its existing stronghold of steel material production and sales, with it notably now receiving royalties on its technology. Not only that, but Korea, which is the world’s largest steel consuming country, with steel consumption reaching 1.1 tons per capita last year, can now place itself as a leading steel country, equipped with the world’s greatest steelmaking technology.

Chongqing Iron and Steel Company, which signed the MOA, was established in 1893, and is a state-run company owned outright by the city of Chongqing, which holds 100% of shares, with 22 subsidiaries and an annual production capacityof 6.5 million tons of steel.

Chongqing sits firmly at the center of China’s great development in the West of the country, with its economic growth rate outstripping China’s over the past few years. It’s strong performance is expected to power ahead further into two-digit rates, with high demand in steel compared to other regions. As part of that success, the Chongqing Iron and Steel Company plans to take a strong step forward as Chongqing’s only integrated steelworks through leveraging its partnership with POSCO and its global competitiveness.

Meanwhile, in addition to the MOA, POSCO and Chongqing Iron and Steel Company have signed an MOU to review cooperation in an automobile cold-rolled project in response to the rapidly-growing automobile industry in the Chongqing region.