Around this time every year, people reflect. People have a moment of review to celebrate or remember their own yearlong episodes before they step on a new start. In 2014, POSCO has been on a vigorous journey moving toward ‘POSCO the Great’. As another year draws to a close, let’s have a look back at keywords of 2014! 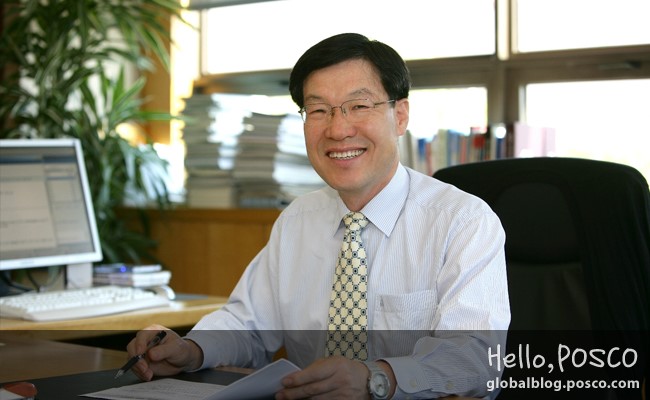 In pursuit of the group’s vision, CEO Kwon has been actively engaging in various activities. Visiting numerous global sites, he encouraged and applauded the accomplishments of all employees. Furthermore, as a member of the World Steel Association’s board of directors and an official member of the execution committee, CEO Kwon exchanged perspectives on the steel industry with leaders of fellow global steel companies. Through diverse opportunities of meetings, he has shown engaged and flexible communication with employees as well. Moreover, CEO Kwon visited client companies such as Hyundai Heavy Industries to inspect current status of solution marketing and announced POSCO’s new business strategy at an investor relations meeting for stakeholders and investors. Ever since his inauguration, CEO Kwon has been passionately leading toward ‘POSCO the Great’ by directly managing major topics of clients and investors. 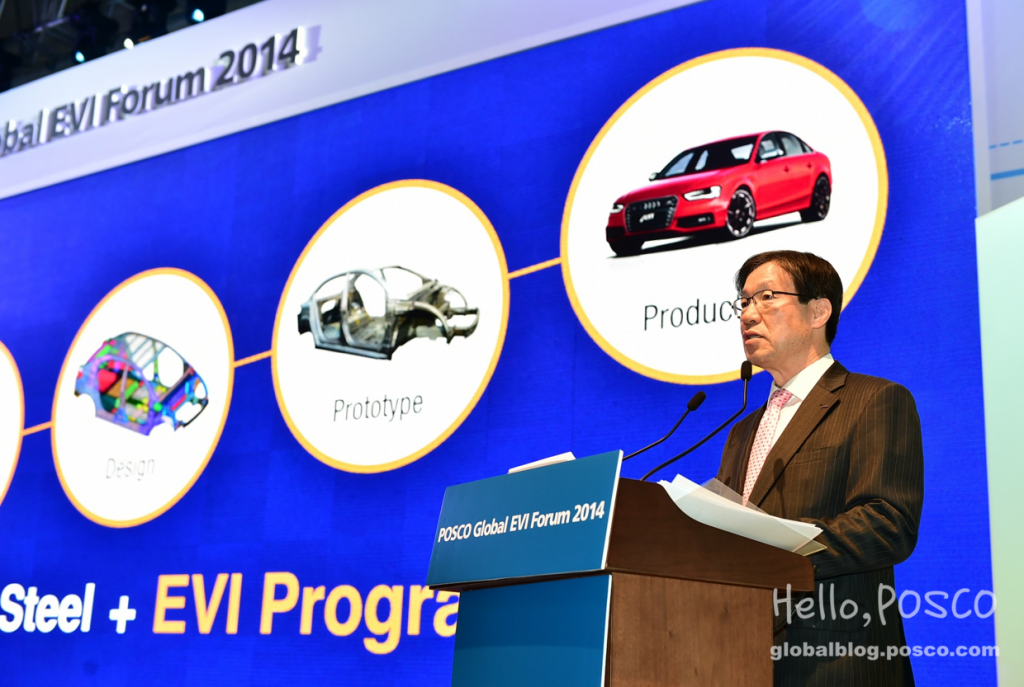 The key point of solution marketing lies in clients. By combining technology and marketing, POSCO has strengthened its competency by offering new and distinctive values to POSCO’s clients. With Steel Solution Center’s operation, POSCO provided preemptive actions to the clients and focused on the sales of strategic products such as marine and energy steel material. Moreover, the launch of Technical Service Centers has created opportunities to provide various solutions to clients more closely. Furthermore, other examples of successful solution marketing include POSMAC, an ultra-corrosion resistant alloyed steel plate, high-manganese steel LNG storage tank and a concept car ‘EOLAB’ which received spotlight at 2014 Paris Motor Show. As a result to many efforts, POSCO’s Global EVI Forum in October, was lauded as POSCO’s distinctive client-oriented marketing festival. POSCO’s solution marketing to enhance client value will continue in 2015 as well. 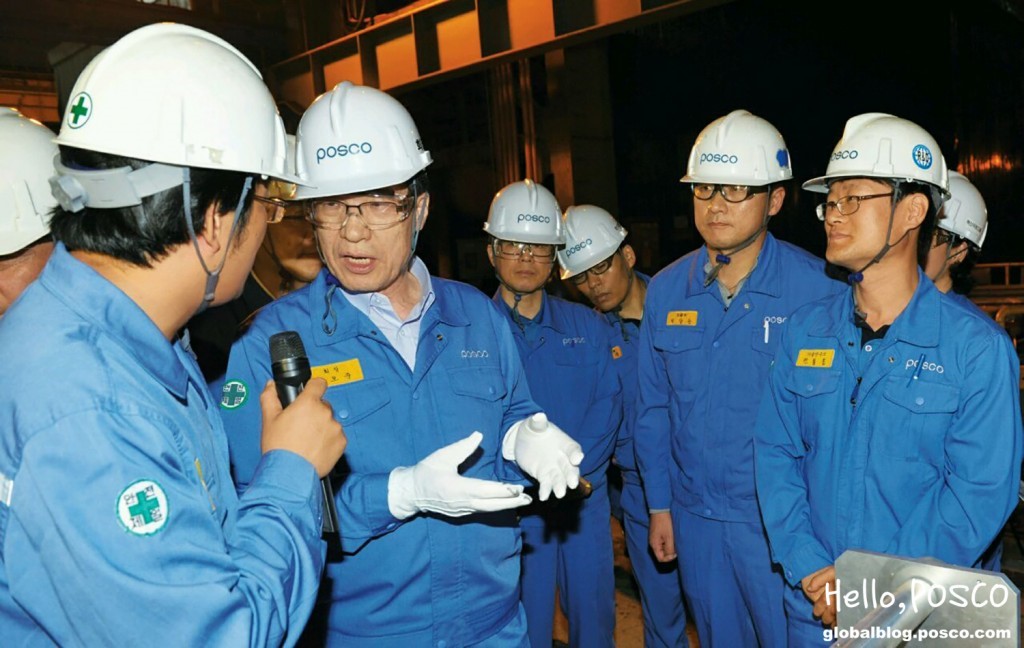 POSCO’s POSTIM is an innovative model developed and applied to achieve the corporate vision of `POSCO the Great’. POSTIM, which stands for POSCO Total Innovation Methodology, is designed to improve the previous innovation system by integrating employees, affiliates, tasks and innovation. POSTIM consists of PWS, QSS+, and SWP activities. Each activity act as an engine for implementation to practice the management ideologies. In fact, on the 4th of December, the Innovation POSCO Festival 2014 took place for the purpose of looking back on the efforts and traces of innovation throughout the year.

5. Financial Structure Reformation
The financial structure reformation is one of the innovation agendas suggested by CEO Kwon. In April, POSCO successfully won project financing for Australia’s Roy Hill Mine project. By this means, POSCO, holding 12.5% of the mine’s stake, will be provided with at least 11 million tons of high-quality iron ore every year for the following 27 years. Moreover, POSCO promoted to sell its LNG Terminal, Posfine and POSCO-Uruguay while signing a MOU with SeAH Group and sold specialty steel affiliate to SeAH Besteel. In addition, POSCO has secured financial liquidity by selling Vietnam’s Diamond Plaza (POSCO E&C) and Masan city’s Daewoo Department Store (Daewoo International). As shown, this year was a significant time period for POSCO, considering that POSCO pursues to secure its steel business competency by achieving financial solvency.

Experiencing a series of innovation throughout the year, POSCO has stepped forward in working method as well.

[Specialist and PCP-oriented Project in Progress]
Specialists and PCPs are promoting projects by drawing issues from their vast array of knowledge and experiences.

[IP Project Counsel]
Last July, the IP Project Counsels were held simultaneously in Seoul, Pohang and Gwangyang to share the results for the first half and plans until the yearend. At the event, CEO Kwon monitored projects in process and provided his ideas to project managers.

[IP Project Special Reward System]
POSCO established the ‘IP project special reward system’ for employees to be encouraged to challenge themselves to take on new projects and concentrate on excellent performance. This system gives substantial rewards to teams or individuals with outstanding results. 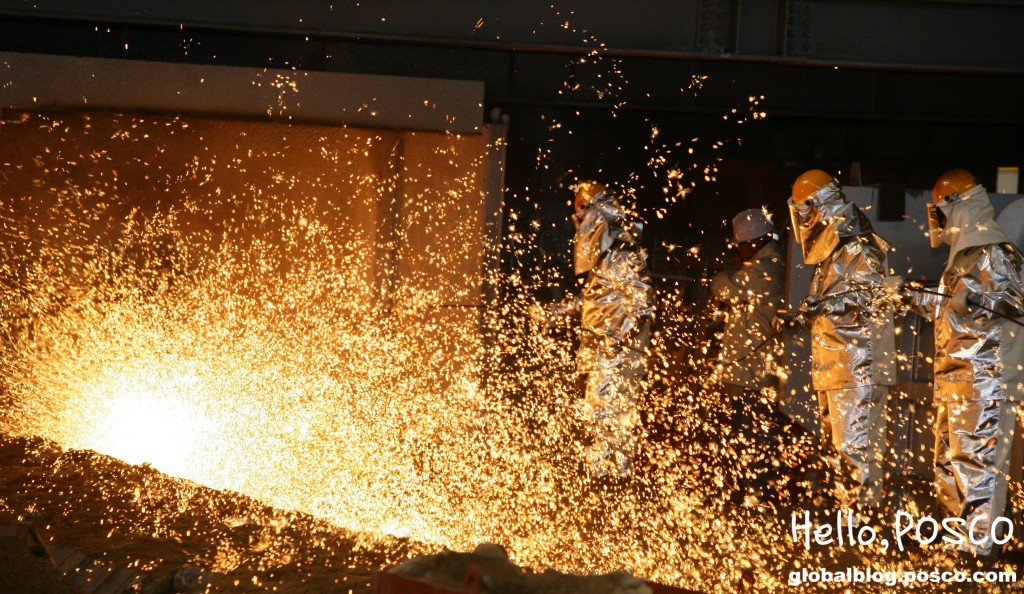 POSCO has been named the world’s most competitive steelmaker for the 7th consecutive time during the past five years by World Steel Dynamics (WSD). Moreover, POSCO was selected as a global sustainable leading company in the SAM-Dow Jones Sustainability Indices (SAM-DJSI) and was named as the ‘Most Respected Companies in Korea’ by the Korean Management Association Consultants (KMAC). Also, in July, POSCO was named as the 177th world’s largest corporations by the Fortune’s global 500.We hope POSCO will continue to create further accomplishments in 2015!

More details are available here at World’s Most Competitive Steelmaker and Most Respected Companies in Korea. 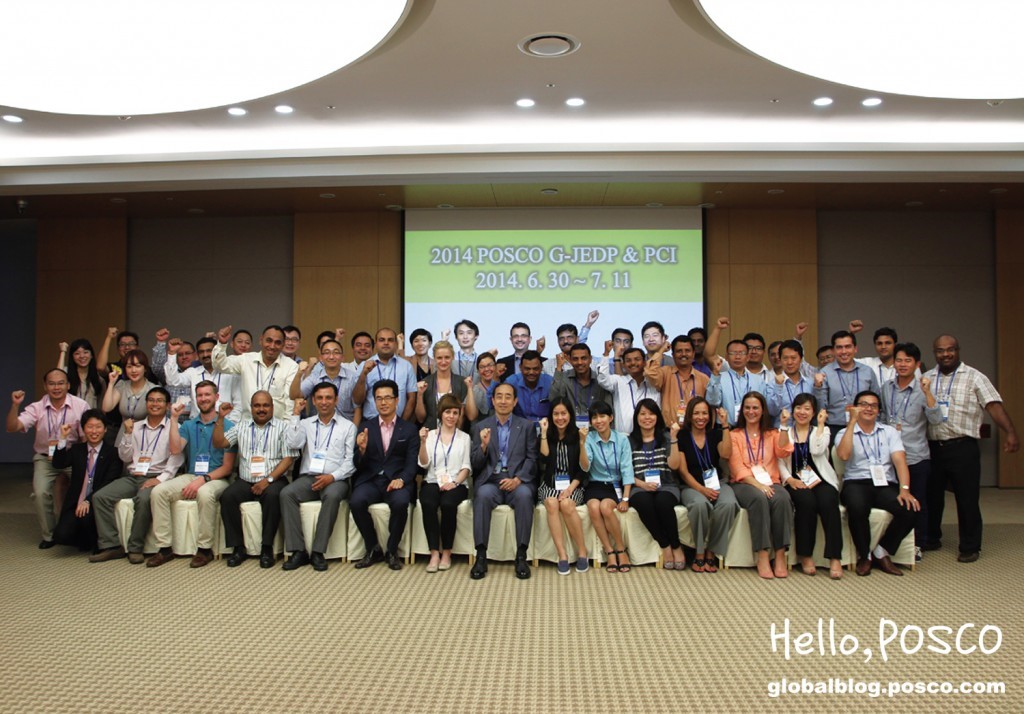 In 2014, POSCO focused on preparations to attain future competency. Three FINEX plants have started operation since January and POSCO-Thailand’s CGL has started its construction in August. Also, POSCO has been building a large demo plant in South America as a prelude to the entry in the global market for world’s first lithium extraction technology, developed by POSCO. In November, Gwangyang Steelworks’ hot rolling plant No.4 was completed. Now indeed, high-quality steel production is capable purely with POSCO Family’s technical ability. This production system supplies 3.3 million tons per year. Lastly, POSCO-Krakatau which has initiated its iron-making in January, also appears to be making pleasant results. 2014 was surely a year of productive and diverse constructions. We expect for more remarkable activities in 2015!

9. Safety
This year, safety has been a very important keyword to everyone in Korea. Through safety exercises like POSCO center fire drills, Pohang and Gwangyang group fire trainings, POSCO Family Safety and Disaster Prevention Resolution Conference, POSCO has been engaging in preemptive activities in safety to stress the importance. Also, POSCO has enhanced inspection in Seoul, Pohang and Gwangyang for sites that are prone to fatal accidents while conducting customized emergency response trainings to reduce risk factors beforehand. In addition, POSCO has created curriculum for safety professionals and conducted cross audits for each steelworks.

10. Pride
Establishing the world-class training process for technical professionals, POSCO has been striving to maintain as a company where employees hold pride in their hearts. In fact, through ‘Great Work Place’ activities, POSCO has been providing a working environment of flexible commuting time and improved work engagement. Also, POSCO has prepared a 5-level job competency level system to foster technical workforce while also selecting employees with professional knowledge and colleagues’ respects as ‘POSCO Master Craftsmen’ and providing exceptional rewards to them. Lastly, through ‘IP Concert’, which was held 19 times in Pohang, Gwangyang and Seoul, employees and executives shared new business philosophy and reinforced the pride in POSCO.

More details are available here at ‘The Great Company to Work At’.

[POSCO Energy]
‘Beyond Energy, Better Life’! Acquired by POSCO Energy, TONGYANG Power has marked its new start with the new name of POS Power. Thus, it is gaining many people’s expectations as they expand abroad into private development business. Furthermore, POSCO Energy has secured a license for 450MW power coal cogeneration plant which is the biggest in size in Mongolia. As a result, POSCO is now the largest shareholder of the fifth power plant business in Mongolia. 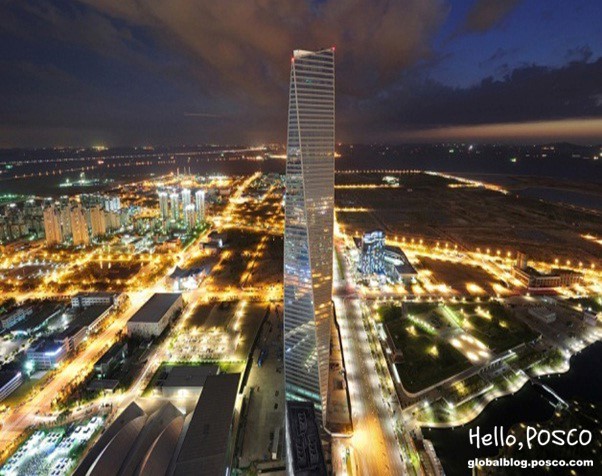 The Northeast Asia Trade Tower is a landmark in Songdo City and the tallest building existing in Korea. 305m in height and 68 floors in total, the building was under construction for approximately eight years. Besides its office and accommodation, the building features many additional facilities. In fact, Daewoo International will soon be joining the office space. Please look forward for POSCO E&C’s activities to become one of the top 10 global construction companies in 2020!

Today, we took a look back on the keywords of 2014 in POSCO. Among the keywords above, we wonder which word stays in your memory the most. As a closure to 2014, we would like to thank you and all employees who trusted POSCO group for the sincere support!