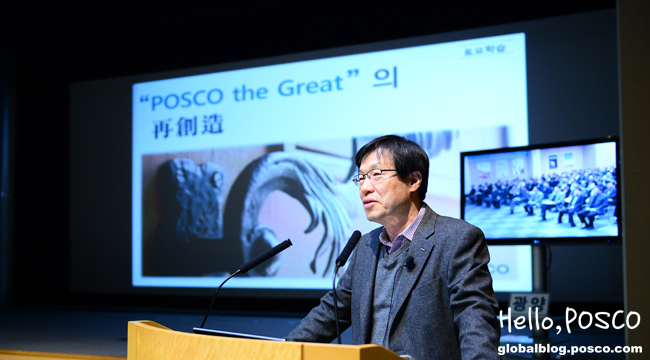 Following his inauguration, POSCO’s CEO Ohjoon Kwon gave a special lecture on March 22nd about ‘POSCO the Great’. This special lecture took place at POSCO Center in Seoul and caught the public eye as it was also broadcasted to a total of 32 other locations including Pohang, Gwangyang, Song-do, Pangyo, Changwon and more. Over 2,500 individuals connected to POSCO, including employees, department managers, CEOs of external partners, tuned in to hear CEO Kwon’s speech. Read on for the passionate speech that CEO Kwon gave to elaborate on the new management philosophy of POSCO. 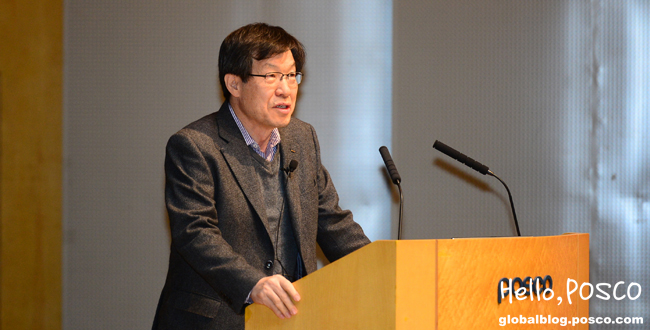 New vision of POSCO – ‘POSCO the Great’. How was the vision born? & what does it mean?

‘POSCO the Great’ was born through careful consideration of keywords that signify POSCO during the CEO selection interview process. At that time, I was reminded Korea’s most respected and famous ruler, ‘Se jong Daewang’ where ‘Daewang’ means “the Great”.  I wanted to apply that same phrase to POSCO as it also got good responses during the interview process. Thus, after becoming CEO, ‘POSCO the Great’ has become incorporated into our vision for the future. This is how ‘POSCO the Great’ came to be and it signifies a revival of past achievements and glorious history to continue moving forward.

Using ‘Innovation POSCO 1.0’ to Implement the ‘POSCO the Great’ Vision 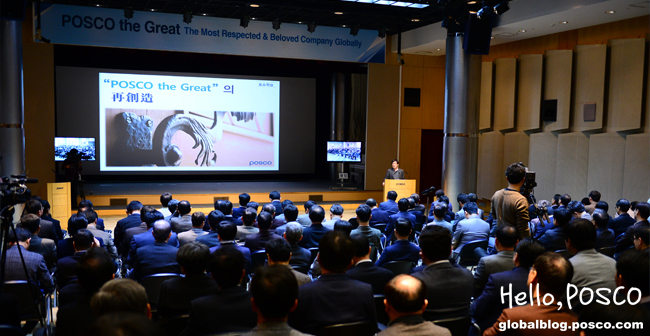 Prior to elaborating on ‘POSCO the Great’, let me say to the POSCO family…have pride in leading the steel industry. In Chinese characters, ‘steel(鐵)’ is constructed by the characters that mean gold(金), king(王) and a particle. So it means “the king of metals”. I believe that even our ancient ancestors acknowledged the wonder of steel and therefore gave the Chinese characters that meaning. As you see, from ancient times, steel has been an integral and essential element of our lives. Moreover, the total GDP of our country made by non-steel materials cannot even reach 1/10th of the GDP accounted for by steel. So I hope that everyone here takes pride in their association with steel and helps POSCO achieve its vision for the future. 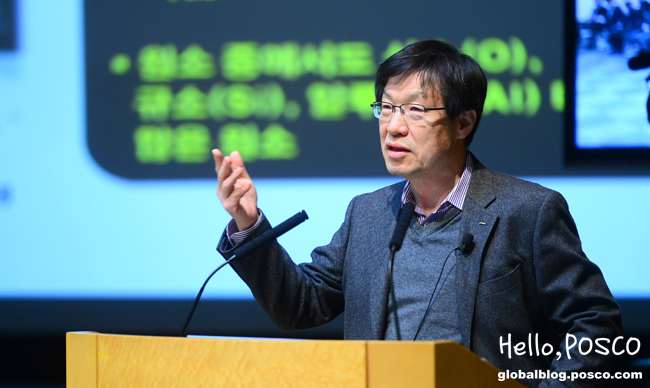 What’s the meaning of ‘Innovation POSCO 1.0’?

After I was elected as the CEO, I established ‘Innovation POSCO 1.0’ as an execution plan for overcoming the current challenges and to revive the glorious past through the vision of ‘POSCO the Great’. Why 1.0 instead of 3.0 or soon-to-be 4.0?

‘1.0’ signifies going forward as one entity, creating a new start based on differentiating ideas, and being number one in technology, sales, quality and all other aspects. I believe that if we can implement ‘Innovation 1.0’, POSCO can once again be great.

Global crisis for the steel industry and future direction for POSCO 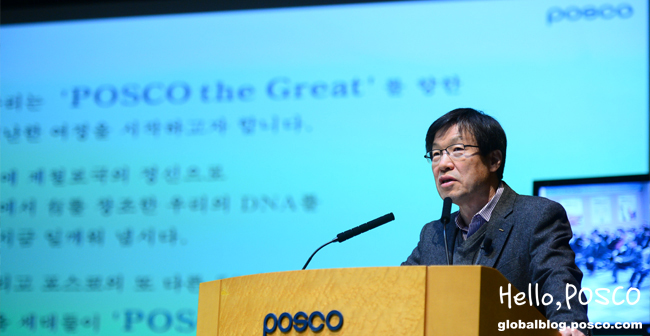 Despite the continued crisis for the steel industry, POSCO is striving to overcome it in various ways.

Looking back at the global steel industry, the demand in China has plummeted since the 2000s, causing a huge surplus in production. In the past, POSCO’s operating profit margin reached nearly 20% but now reaches only single digit figures. Despite this difficult operating environment, POSCO has pursued various strategies to overcome this crisis.

POSCO has mobilized its business strategy to increase investments and foster innovation. POSCO has expanded its core business, steel, to cover other areas including renewable energy and also has invested in the materials industry. In addition, POSCO has invested in creating a world-class production system in the Americas, Asia and Korean markets. Furthermore, POSCO has introduced an innovative methodology for work process.

In particular, creating and applying QSS has led to increased profitability and improved performance through development of employees. POSCO has been able to be a well-respected and loved company because of its focus not only on profitability but the growth of its employees and other stakeholders. 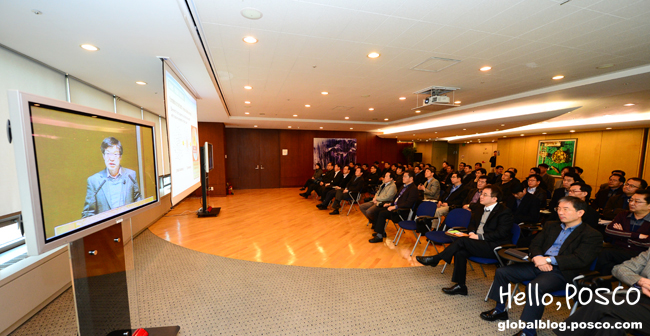 POSCO to expand abroad.  A new leap through humility, introspection and reflection

Until now POSCO has strived to create good results, however I think now is the time to take a look back at POSCO. First of all, POSCO has ranked 1st as the world’s top steelmaker for four years in a row. It was also ranked as the most respected company by Fortune and was recognized as a global sustainable leading company for 9 consecutive years in the SAM-Dow Jones Sustainability Indices (SAM-DJSI). It was also included in World Economic Forum’s global 100 group.

On the other hand, the internal rate of return has been low for four consecutive years since 2010 making prospects for a turnaround difficult. Furthermore, market capitalization ranking has fallen from second to third. Operating profit to sales ratio decreased compared to net debt equity ratio rising and credit ratings have fallen as well. All in all, I strongly believe that it is time for POSCO to humbly take a step back to reflect.

I’d like to compare POSCO’s current state to ‘Dong-yi-bul-hwa’ – ‘同而不和’. The meaning behind these Chinese characters is acting in agreement on the outside, but not fully acknowledging on the inside. ‘Too big to fail’ is no longer valid. To rise above the current environment, POSCO must have faith in itself to take on new challenges.

3 Management Ideologies and Agenda behind ‘POSCO the Great’ 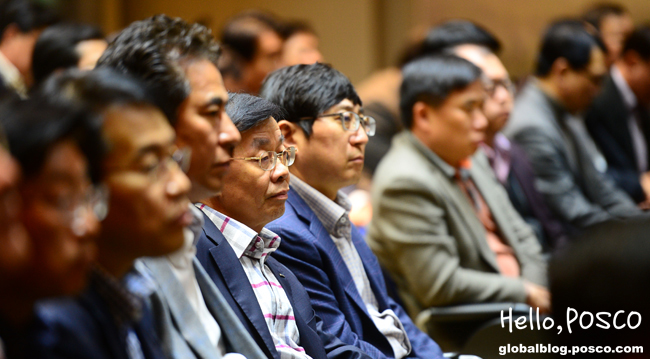 3 management ideologies behind the vision of ‘POSCO the Great’…

3 management ideologies behind the vision of ‘POSCO the Great’… are One POSCO, Creative POSCO, and Top POSCO.

First of all, One POSCO puts importance on pursing business development based on shared values and seeking shared growth for customers, suppliers and society. This can be achieved through harmonious cooperation and all employees having a sense of ownership.

Creative POSCO means to propose new ideas to create new value. This places importance on going beyond traditional thinking so that new creative ideas can be developed. Through this, better customer services can be delivered to meet customer needs.

In the past Top POSCO may have meant following advanced technologies, but now the goal is to develop products and technologies that do not yet exist. Top management is about seeking success of customers based on the best talent and confidence. 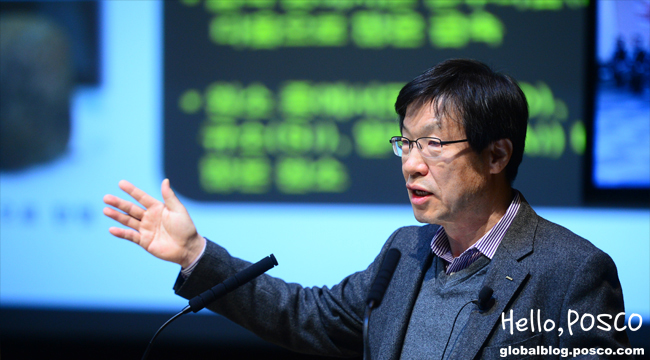 4 innovation agendas based on One POSCO, Creative POSCO, and Top POSCO

‘Innovation POSCO 1.0’ includes the 4 innovation agendas that POSCO must execute in order to fulfill the three management ideologies. Since taking office, I have been emphasizing strengthening the competitiveness of the steel industry, selecting new growth business areas, improving the financial structure and management infrastructure.

Strengthening the competitiveness of the steel industry will be done by innovating value creation, production cost, quality and business structure and global management. We should especially strengthen technology-based solutions with marketing to establish differentiation from competitors and provide products that fit customers’ needs.

Although there have been many new growth businesses, there were unexpected challenges that caused delays and made profit generation difficult. We are planning to refine and strengthen the selection of new business opportunities. We will re-evaluate market attractiveness, technology competitiveness, entry barriers, and evaluation of the value of POSCO’s materials and energy.

Furthermore, the improvement of financial structure has a close association to securing profitability through improving original competitiveness of the steel industry. In terms of financial structure, business restructuring and exchanging certain subsidiaries or selling the equity holdings will help the group’s overall efficiency.

Lastly, we will innovate the management structure to renew the work process and establish a consensus for the current situation. Projects centered around professionals will create results and project team leaders will have more responsibility. Above all, we will motivate the creation of new ideas by rewarding those who propose new projects and put forth new ideas.

Since POSCO began promoting a project-based approach set out by “innovation POSCO 1.0’, 380 projects have been developed and a professional employee system has been implemented. The managing directors have decreased by more than 50%. On one hand, it has created motivation for employees to strive to become directors which will be evaluated on the performance of project-based results.

Can you feel the hope and positive energy coming from the words of CEO Ohjoon Kwon? We hope you now have a better understanding of ‘POSCO the Great’ and look forward to your continued interest in POSCO as we set out to fulfill the vision of ‘POSCO the Great’!