In 2014, China’s GDP growth rate increased 7.4 percent from the previous year. This might seem like a large number, but in fact, it is the lowest level of growth since 1990, when the rate was 3.9 percent. The number signaled a clear change in China’s growth levels.

As a result, in December of the same year, Chinese President Xi Jinping declared that China formally entered an era of xin chang tai. In English, the term translates to “new normal” or “a new state of normality.” His statement acknowledged the nation’s slowing growth and addressed the need to create a growth structure centered on investment and innovation.

China’s “new normal” is about transitioning to this new way of growth. Changes in the country’s economic fundamentals, including the “new normal” market environment, also apply to the Chinese steel industry. As a result, the industry, too, is searching for new solutions.

Over the past few decades, the Chinese economy grew at unprecedented rates, which caused a variety of problems both domestically and internationally. Rapid growth was accompanied by adverse effects, such as regional and socioeconomic inequality, environmental pollution, abuse of natural resources and overcapacity.

The first step is to adopt new technologies and business models to increase the utilization of private capital and the diversification of investment sources. The second step is to satisfy a broad spectrum of consumer demands. The third is to focus on high-tech industries to attract foreign capital. The fourth is to reinforce quality-based market competition structures. And finally, according to the five-point plan, there will be a strong emphasis on conserving resources and protecting the environment.

The “new normal” era signals a major economical shift for China. The far reaching changes in the nation’s economic fundamentals are characterized by “three lows.”

The first low involves China’s steel production and consumption. Both of these areas are facing low growth, and an early peak is considered to be fast approaching, according to experts. The China Iron and Steel Association (CISA) estimates that the country’s crude steel production recorded negative growth in 2015 for the first time since 2000. 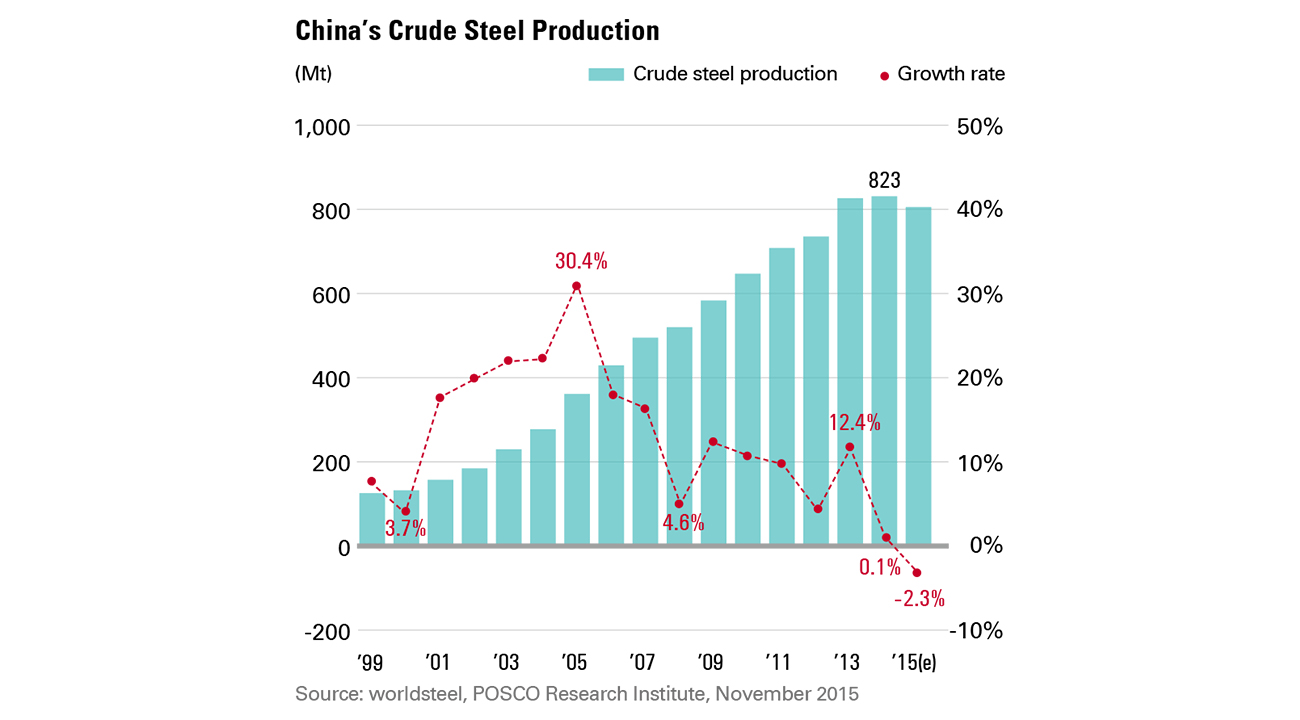 Second, steel prices have been declining steadily, due to oversupply related to overcapacity, intensified price competition and pressure from the excess supply of iron ore. China’s crude steel production led the global “raw materials super cycle” in the 2000s, but its slowdown is gradually freezing demand for iron ore.

Developing these areas is important because, according to experts, the competitiveness of the steel industry now depends on advanced operation technologies, brand innovation and IT services more than ever.

The Future of Steel in China

A CISA representative forecasted massive transformations in China’s steel industry. Two of the major projected changes expected to occur in the next five to ten years are increased exports and entry into overseas markets. These signs of change are already visible, as the Chinese government recently opened the doors of its steel industry to foreign capital.

Exports have soared due to the depressed domestic steel market, and government policies to move steel facilities overseas are being put into effect. Experts agree that this move will have a positive impact on China’s steel industry.

The Chinese steel market is expected to expand further, as steel companies are predicted to double their efforts to increase exports and enter overseas markets. The opening of the nation’s steel industry will no doubt bring about changes for the global steel market, especially considering that China makes up half of it.