The steel market in the Southeast Asian region has made significant gains over the past several years, with production capacity up and demand for steel surging. That’s led to a large increase in steel imports around the region.

However, steel production in China has expanded even faster, pushing down prices in Southeast Asia and threatening regional competitiveness. In response, many governments are increasing trade barriers, as they look to protect their individual steel industries from a glut of competition. 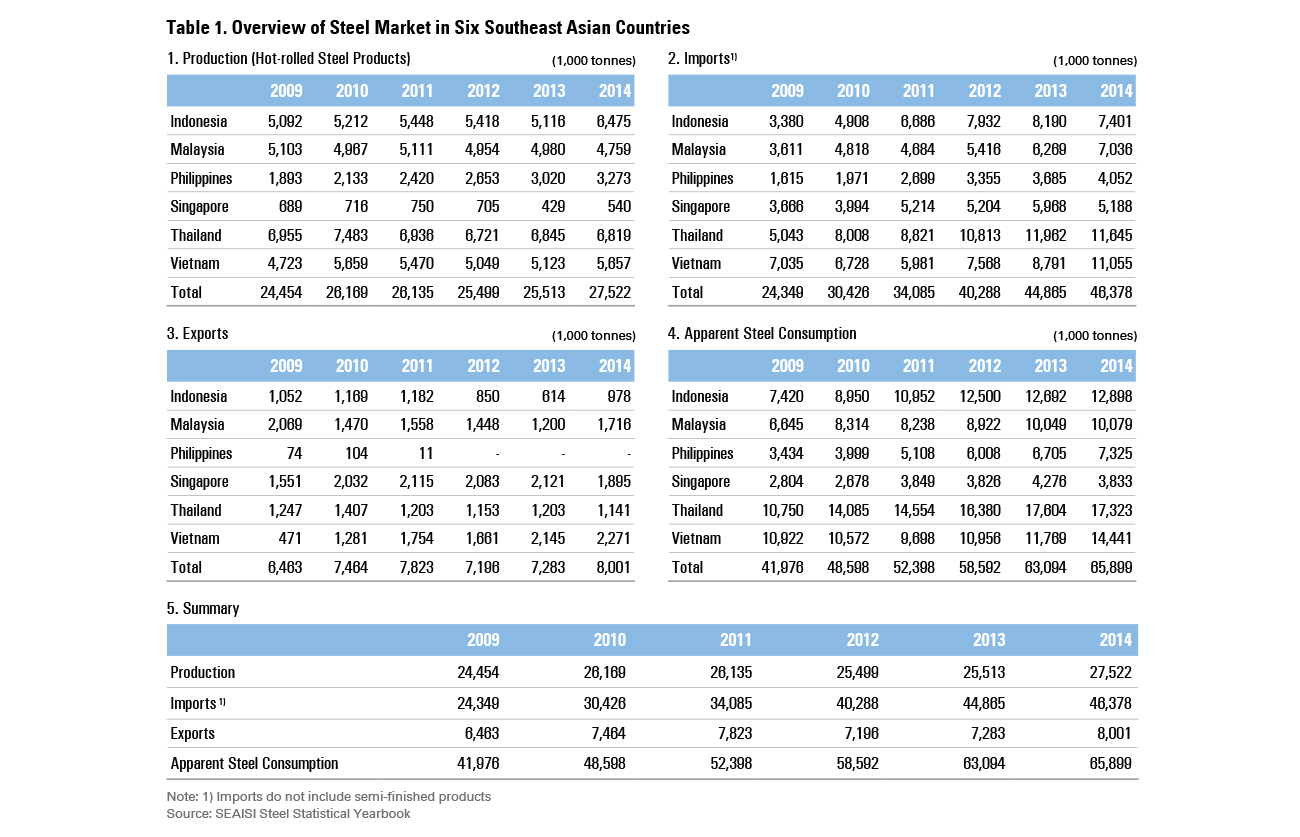 From 2009 to 2014, the six leading countries of Southeast Asia—Indonesia, Malaysia, Philippines, Singapore, Thailand and Vietnam—increased their production of hot-rolled steel products by 12.6 percent to reach 27.5 million tonnes per year.

However, the growing economies around the region meant that steel demand increased even faster. Over the same period, apparent steel consumption leapt 56.9 percent to 65.9 million tonnes. The difference was made up by imports, which nearly doubled to 46.4 million tonnes from 24.3 million tonnes.

Despite an economic slowdown affecting much of the world, the International Monetary Fund is predicting further growth for the region, expecting steel consumption to rise to 80 million tonnes by 2020.

To fill that gap, the major steel-producing economies of Korea, Japan and China have increased their exports. POSCO opened Krakatau POSCO, the first integrated steelworks in the region, in 2013, and now has production facilities and service centers in Malaysia, Vietnam, Myanmar and Thailand. As of 2014, steel companies from Korea, Japan and China comprised 80 percent of all imports to those six Southeast Asian countries.

In particular, China is making major inroads in the region, especially as its domestic economy slows and companies look to make up the difference abroad. In 2009, China comprised 12 percent of steel imports to those six Southeast Asian countries, but by 2014 that share had climbed to 42 percent.

With international steel supplies up and prices falling, Southeast Asian countries are responding by protecting their markets.

Trade barriers being enacted around the region include traditional protectionist measures (like tariffs, anti-dumping regulations and safeguards), technical barriers to trade (or TBTs) and non-tariff barriers to trade (like “Buy National” campaigns). For example, Indonesia enacted a “New Trade Law” in February 2014 that enabled the government to restrict imports of certain goods, including steel.

Anti-dumping (AD) duties and safeguard actions are especially on the rise. Over just 2013-2014, the six Southeast Asian countries took 33 anti-dumping measures, as opposed to 52 AD measures in the previous 18 years. Malaysia and Vietnam, which never took any AD measures from 1995 to 2012, took seven and four AD actions respectively from 2013-2014.

TBTs on steel imports are also tightening around the region. Indonesia requires certificates of approval to import hot-rolled, cold-rolled, coated, galvanized steel and long products, and the list is growing. Thailand, too, has made its approval process more complicated for certain imports, and Malaysia requires certificates of approval for certain steel products.

At the end of 2015, 10 countries in the region came together to form the ASEAN Economic Community (AEC), intending it to grow into an Asian version of the European Union. Containing 620 million people and a combined GDP of $2.5 trillion, the AEC has four major goals:11o build a single market and production base,

1. To become a highly competitive region,

2. To achieve equitable economic development, and

3. To fully integrate the region with the global economy.

4. Analysts believe that the AEC, while bringing the region closer together economically, may further strengthen protectionism against countries and companies from outside the region.

In light of these trends around Southeast Asia, experts say outside companies need to be cautious when investing in this region, and partnerships and joint ventures with local steelmakers are recommended. But with investments going on in the steel industry in Southeast Asia, particularly in Vietnam and Indonesia, soon domestic production could be on the rise, too, replacing many of the imports.

Oversaturation is always a risk, but, given the growth potential of this market, Southeast Asia is still considered a good region for investing. However, care is highly recommended, as the competitiveness of the steel market around the region is expected to rise, especially with the further development of the AEC.