According to scientists, there may be more earthquakes than usual in 2018. As part of the Geophysical Research Letters presented at the Geological Society of America, scientists tracked major earthquakes with a magnitude greater than 7 from 1900 to 2017. They found distinct and repetitive intervals at which the average number of earthquakes per year was much higher than other years. These intervals coincide with the Earth’s regular, recurring periods of slower rotation, when the law of inertia causes the molten core of the earth to ooze out towards the surface. After a while, the built-up pressure erupts on the Earth’s surface, compromising the structural integrity of homes, buildings and structures.

Scientists predict 2018 may be a tumultuous year for earthquakes. (Source: Take Two)

As structural damage is the leading cause of injury and deaths during an earthquake, architects, engineers and builders need to make sure buildings are built with the right materials and design.

SEE ALSO: What it Takes to Build a Natural-Disaster-Proof House

The most dangerous type of earthquakes are ones that trigger horizontal movements, because tall buildings are better at resisting vertical loads than horizontal ones. These ground motions can damage building foundations in a matter of minutes, causing severe injuries and deaths. Building a structure to withstand seismic waves starts with the right materials with the right properties, and steel is by far the most widely used material for building earthquake-resistant buildings.

According to the World Steel Association, ductile buildings are safer as they dissipate energy from seismic waves. A building will typically have ductile parts that can undergo plastic deformations without complete structural failure during an earthquake. Steel is the most common type of material for such parts.

Moreover, due to the law of inertia, the lighter the building, the less force seismic waves will exert on the building. That’s why it’s important, especially for taller buildings, to be made of light and flexible materials such as steel that can “bend” with the movement of earthquakes. On average, multi-story steel buildings are 60 to 70 percent lighter and 10 times stronger than concrete-framed buildings of the same size.

With steel, builders can add vital designs and reinforcements to keep the structure standing through an earthquake. Here’s some of the most widely-used measures.

Cross braces transfer the force of an earthquake to the ground. (Source: Earthquakes in India)

The structural integrity of buildings can be reinforced with steel cross braces that frame the exterior of a building in an x-shape. Ultimately cross braces can transfer the force of seismic waves back down to the ground, instead of letting the building take the hit. Builders can also reinforce the walls of buildings with additional vertical walls, or shear walls, that add stiffness to the frame of the building, allowing it to resist swaying or horizontal movements. 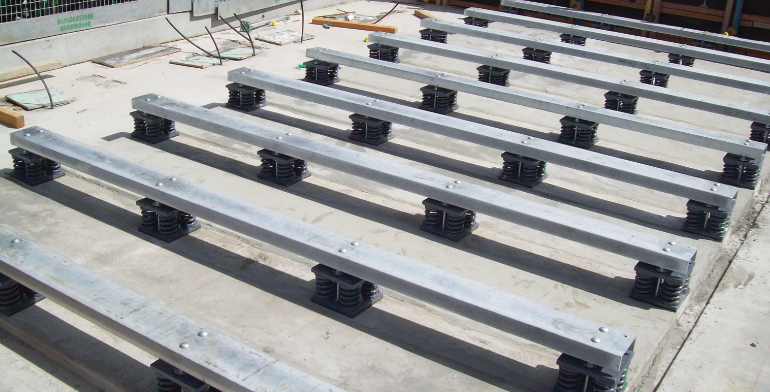 Base isolators absorb much of the shock of seismic waves. (Source: Embelton)

Base isolation involves separating the building from the foundation so that the isolators to absorb shock from the earthquake. The isolators allow the building to move at a slower pace because they dissolve a large part of the shock. Moment-resisting frames also effectively dissipate energy from floors and roofs to the building’s foundation and the stiff yet flexible frames can change shape during an earthquake. Although more costly, moment-resisting frames enable buildings to withstand an earthquake with excessive horizontal movement.

Putting it into practice with POSCO’s Steel House

In September 2017, Young Bae Kim’s home in Gyeongju province, Korea was hit with a 5.8 magnitude earthquake, just 8.9 km from where the earthquake started. Surprisingly, Kim’s home was unscathed. “I could feel the ground shake, but the house was completely under control.” Kim expressed.

Kim lives in one of the Steel Houses built by POSCO employees who volunteer to build homes and bridges for communities in need. Each Steel House is made with POSCO’s lightweight structural steel known for its durability, fire resistance and vibration resistance. The homes also incorporate PosMAC, a specialized galvanized steel that is 5 to 10 times more corrosion-resistant than standard steel and is more durable and affordable.

Because all the Steel Houses survived the Gyeongju earthquake while other homes were damaged, more and more people in Korea are choosing steel for their homes over traditional building materials such as wood and concrete. The same trend can be observed in Japan, where earthquakes are much more frequent. In order to build more earthquake-resistant buildings, steel is still the best solution available.