Recently, the global steel industry has fallen into a slump. This has encouraged widespread rumors that the industry is sinking into a long-term market recession and that overcapacity is to blame.

Now some experts claim that the steel industry cannot avoid a long-term recession without resolving the issue of global steel overcapacity. As a result, overcapacity has become a hotly debated and contentious issue.

One of the major difficulties in determining the level of overcapacity is the calculation process. The report states that to calculate the extent of overcapacity, an accurate measure of capacity is necessary. However, the common method of calculating overcapacity by using nominal capacity is likely to yield exaggerated figures. This happens because it is physically impossible for plants to operate year-round at 100% nominal capacity, due to various issues such as raw materials supply, facilities maintenance, and the existence of outdated facilities. 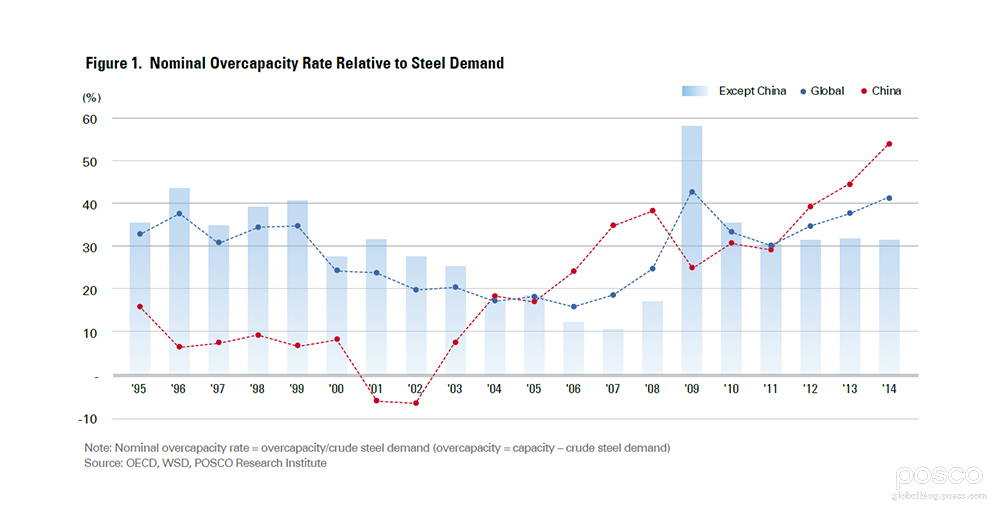 The only way to accurately calculate capacity at the highest possible operation rate, known as effective capacity, is by investigating every single steel plant around the world. As you can imagine, this type of study is practically impossible. However, we are getting closer to a more accurate study.

In recent years, the Organization for Economic Co-operation and Development (OECD) has perfected its method of quantifying the effective capacity of member states. The OECD bases maximum production on peak market condition during a certain period. The market condition is estimated with consideration to factors such as steel production, price, and profitability.

The Reality of Overcapacity

Dr. Rod Beddows, author of Steel 2050, published in 2014, pointed out that “While efforts to reduce capacity are important, the continuous growth of steel demand is essential in lowering overcapacity rates.” One of the biggest concerns in the steel sector today is the future of Chinese demand and supply. But according to Dr. Beddows, we don’t have to worry because Chinese steel demand has not peaked yet. He claimed “There are still over 300 million Chinese requiring industrialization and urbanization. The housing and general building stock needs replacement.” And of course all of this development involves steel products.

Dr. Beddows admits that “Current overcapacity in China is large,” but he stated that “growth plus Xi Jinping’s new policy initiatives for China’s infrastructure and manufacturing will lead to its rapid decline, and by 2017-2018 supply and demand should be in balance.”

Meanwhile, the report states that investment in infrastructure and the growth of the manufacturing sectors in emerging countries such as India and the Middle East is important in creating steel demand, and might offset China’s declining steel demand in the future. However, the global economy has not shown clear momentum for recovery since the financial crisis, and concerns are mounting over a slowdown in the Chinese economy.

No matter how you look at it, overcapacity is a problem and a recurring one at that. Dr. Beddows claimed that “The only way to manage this problem is to create a level playing field in terms of ownership, by eliminating state ownership, and trade in the industry. Regulation in general is also of increasing importance.”

Dr. Beddows suggested ways that the industry can remove state ownership. He said, “Price risk hedging mechanisms and improved service levels to customers are the two most important issues for the industry. I recommend that organizations such as World Steel Dynamics focus on these to help the industry improve.”

So it seems that overcapacity is becoming a reality, but the situation is not as dire as many think. It is possible to overcome the challenge of overcapacity if the Steel industry works in unison to reduce unnecessary excess capacity.