For some time now there has been concern surrounding the future of Korea’s manufacturing sector. Growth is continuously decreasing, and profits keep falling. According to the report, “Korea’s Next Big Manufacturing Leap” by Dr. Park, Hyun-sung Senior Principal Researcher of POSCO Research Institute (POSRI), this is largely due to the sluggish global economy, which is struggling to recover, and to the fact that Korea is being nudged out by its rivals, China and Japan.

China is rapidly catching up with Korea in major manufacturing sectors, including automobiles, steel, and smartphones and Japan’s price competitiveness has improved thanks to Abenomics and the weak yen. The Korean government and companies agree that manufacturing is in crisis. This is a serious concern because manufacturing still accounts for the lion’s share of Korea’s economy.

The second challenge is the fact that Korea is sandwiched between China and Japan. Bolstered by the weak yen, Japan’s export competitiveness has increased significantly, and China is rapidly catching up with Korea in terms of technology. In 2014, China had 1,431 export items that were global best-sellers, while Korea had only 63 such items.

The third challenge for Korea is that its manufacturing sector has limited differentiation strategies and no new growth engines. The competitive industrial performance (CIP) index, released by the United Nations Industrial Development Organization, placed Korea eleven places higher than China in 2000, but only three places higher in 2011. As it stands now, Korea is only 1.9 years ahead of China in scientific and technological competitiveness.

In order to stimulate the manufacturing industry, Korea must first encourage a culture that values manufacturing, a creative workforce, and innovative technology that will lead the future of Korea’s manufacturing progress. These three elements are the basis of a manufacturing powerhouse.

To this end, the Korean government has announced the “Five-year plan for Development of Companies of Middle Standing (2015~2019)” with the aim of nurturing 5,000 medium sized enterprises and 100 hidden champions by 2019.

Next, Korea should nurture a creative workforce and make the most of its talent. As it stands, Korea’s human resource capability is low relative to the size of its economy. This is an important task for Korea because in the 21st Century one person’s innovation is more important than any product or service. For instance, startups, such as Facebook and YouTube, employ more than 5 million people. To take the lead in creating innovative technology Korea must develop a system to find, nurture, and utilize creative talents. 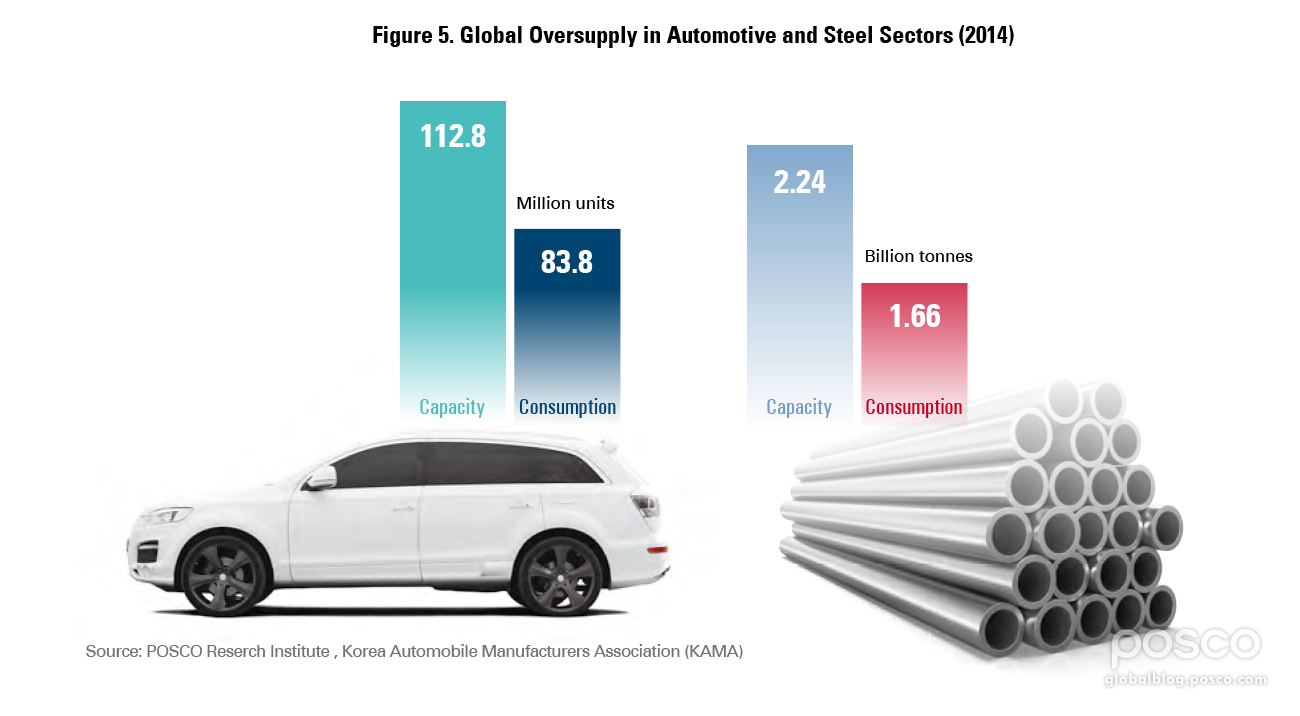 Backed by a culture that values manufacturing, a creative workforce, and innovative technology, Korea should instigate a new manufacturing revolution. If Korea plays its cards right it will enter the fourth industrial revolution, which will open a new chapter in manufacturing.

The fourth industrial revolution will be led by intelligent factories that integrate traditional industries with ICT (Information and Communications Technology). These factories will be operated by a two-way communication system between production facilities and products built on a single platform to optimize all production processes.

Smartification is also rapidly gaining ground at industrial sites, such as POSCO’s smart plate factory at Gwangyang Steelworks. In order for Korea’s manufacturing to survive global competition and grow sustainably, it should strive for manufacturing innovation through smart factories, and add value to existing products and services.

Korea’s manufacturing sector may be facing a crisis, but it has the ability to come out on top. According to the report by Dr. Park, Korea boasts strong manufacturing competitiveness, prowess as an IT powerhouse, and world-class ICT infrastructure. With such advantages, Korea should actively embrace the future of manufacturing and implement innovation strategies tailored to its manufacturing.