It’s that time of year again when the eyes of the car world gravitate to Detroit, home of the North American International Auto Show (NAIAS). It is here that automotive companies from around the world gather to show off their representative flagship models and integrated concept cars of the future.
But among the crossovers and concepts, one exhibitor stands out from the crowd. POSCO, the world’s second largest automobile sheet producer, is the first steelmaker to participate as an exhibitor in the 109-year history of the show and is making its mark as a both a producer of quality products as well as a total solution partner across varied industries. 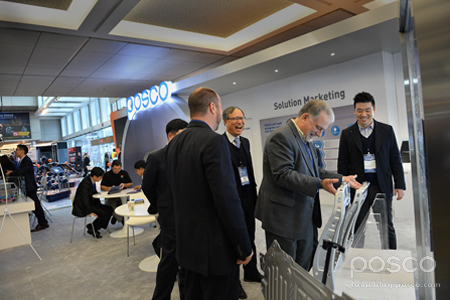 At CES earlier this month in Las Vegas, the world saw how traditional and non-traditional technology industries partnered and collaborated on ways to do business and address global issues, from making roads safer to preventing illnesses. These cross-industry collaborations are becoming increasingly common and can be structured to meet multiple objectives while spanning multiple industries.
The trend of cross-market relationships is also emerging in the steel and automotive industries, specifically in the areas of lightweight vehicles, the latest innovations in steel applications and eco-design for automotive materials. Recognizing this, POSCO is making multiple efforts to step out of the oft-confining boundaries of industry and expand its services to other markets.
Among these efforts are collaborations within POSCO Group. POSCO TMC, for example, is partnering with the Group as a specialist of motor cores for electric automobiles while POSCO ChemTech is affiliated with a company specializing in battery materials. Such collaborations are exactly in line with POSCO’s policy of building a sturdy total solution-based revenue mode.
“POSCO is no longer simply a steel provider. It is a ‘total solution partner’ that works from A to Z for the complete production of automobiles,” noted POSCO executive director Wonki Kim at POSCO’s press conference at the Cobo Center in Detroit. “It will play the role of being the best assistant in reaching eco-friendly, lightweight vehicles while providing values that take a great step forward through utilization techniques such as figuration and welding based on high-quality materials as well as commercial support.”

Paving the Road to Sustainability with Steel Sheets 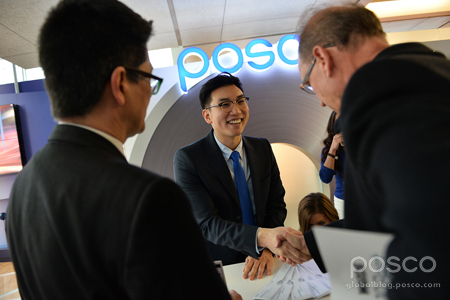 POSCO’s technology on display at NAIAS demonstrates the steelmaker’s unique raw materials for future eco-friendly automobiles, such as hot press forming (HPF) and PosM Steel.
The latter of the two is considered a “dream material,” as its intensity is five times stronger than other steel in terms of machinability, while it can withstand up to 100 kilograms per square millimeter. Therefore, it proves excellent in impact absorption and increased safety—one major focus regarding future automobiles. 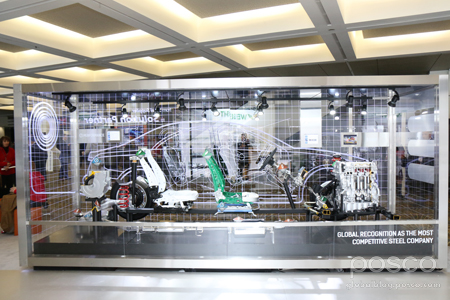 About 30 high-strength and lightweight steel products, including POSCO’s original products, are being exhibited at this year’s NAIAS. POSCO plans to attract the attention of global automobile companies by presenting its auto body made with the world’s best car sheets.

Likewise, POSCO aims to address global automakers’ purchasing needs at NAIAS by revealing the most ideal steel plates for automobiles. The weight of this steel itself is about 26.4 percent lighter compared to mid-sized vehicles and has been verified in terms of safety. It also gives off fewer emissions of carbon dioxide compared to electric vehicles made with one-third the gravity of aluminum in comparison to iron.

POSCO “Driving” the Auto Industry Since 2010 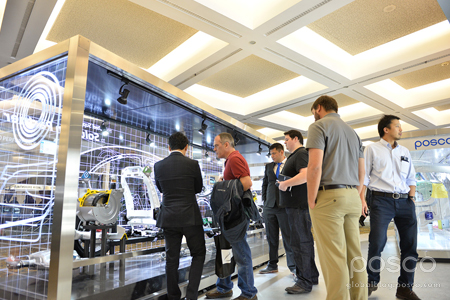 Despite POSCO’s recent efforts to help construct the automobiles of the future, the company has been pursuing automotive endeavors for a while now. In fact, POSCO has been working toward the successful development of a sustainable electric car body ever since 2010. In just two years, POSCO launched PBC-EV, a safe, lightweight car body developed especially for electric vehicles. The weight of the PBC-EV was reduced by 26 percent compared to cars of the same size with internal combustion engines.
In addition, the car body possessed high-strength properties and received a score of five stars from EURONCAP and achieved a “Good” safety rating from IIHS. The development of PBC-EV was a result of applying the world-class Ultra High Strength Steel (UHSS) to over 40 percent of the material and optimizing advanced construction methods such as HPF (Hot Press Forming).
Other milestones were reached in 2012 when POSCO signed a joint development agreement with Renault-Samsung, and again in 2014 when the company joined in on the EOLAB production project with the French automaker. The revolutionary concept car boasts a super-efficient fuel economy of 100 kilometers per liter, thanks to its extraordinary lightness—a key to the development of future cars—enabled by the use of its state-of-the-art, high-strength steel and special magnesium panels developed in conjunction with POSCO.
Then, last year, the steelmaker held the POSCO Automobile Solution Seminar, which was attended by over 250 representatives from automotive part manufacturers, universities, R&D institutions and finished carmakers including GM Korea, Ssangyong Motors, and Renault Samsung Motors. The seminar focused on promoting POSCO’s latest technologies for automobile solutions and featured two stripped down vehicles that showcased the latest automotive design trends and materials.
Now, in 2016, POSCO continues to be at the forefront of the development of the auto industry of the future. Although it’s impossible to know for sure what the future of the automobile market will look like, one thing is for certain, according to POSCO’s managing director, Wonki Kim: “Steel is still the ‘Best Solution’ and it will continue to be in the future.”