For some artists, steel can be heavy and difficult to work with. In addition, considerations for ductility, corrosion resistance, and price must also be taken into account. Working to address these issues, POSCO has partnered with many artists, architects, and designers to provide the right steel to match their artistic vision.

In the three pieces below, POSCO’s World Premium Products were used to offer unique solutions for each design concept. See how these three pieces of art utilized steel to not only make them stronger and longer-lasting, but also to make them more beautiful.

The Solar Pine sculpture is located at POSCO Energy’s headquarters in Incheon, South Korea. POSCO Energy wanted to install a structure in its Green Park that utilized solar power, could be mass-produced, and displayed an aesthetic beauty that could be used in parks and green spaces around the globe. Its pattern resembles the geometric shape of a pine cone with an angled roof with solar panels. During the day, its unique pattern casts a beautiful shadow on the ground below, and at night the energy absorbed by the solar panels is used to power lighting on the Solar Pine and also within the park. 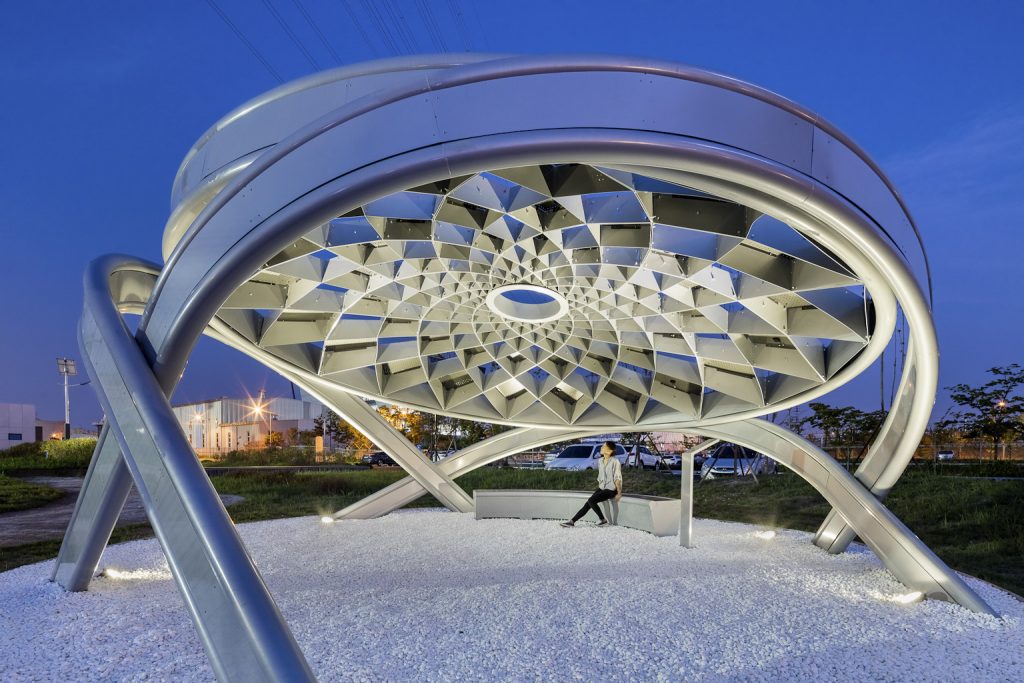 At night the Solar Pine lights up using the energy absorbed through its solar panels. (Photo courtesy of Kyungsub Shin)

The upper structure is 7.2m in diameter and contains nine separate modules with 54 solar panels that can generate 1200W per hour. Also, because it is made for mass production, each piece is made in the factory and bolt-assembled on location – making construction simpler while also lowering costs. 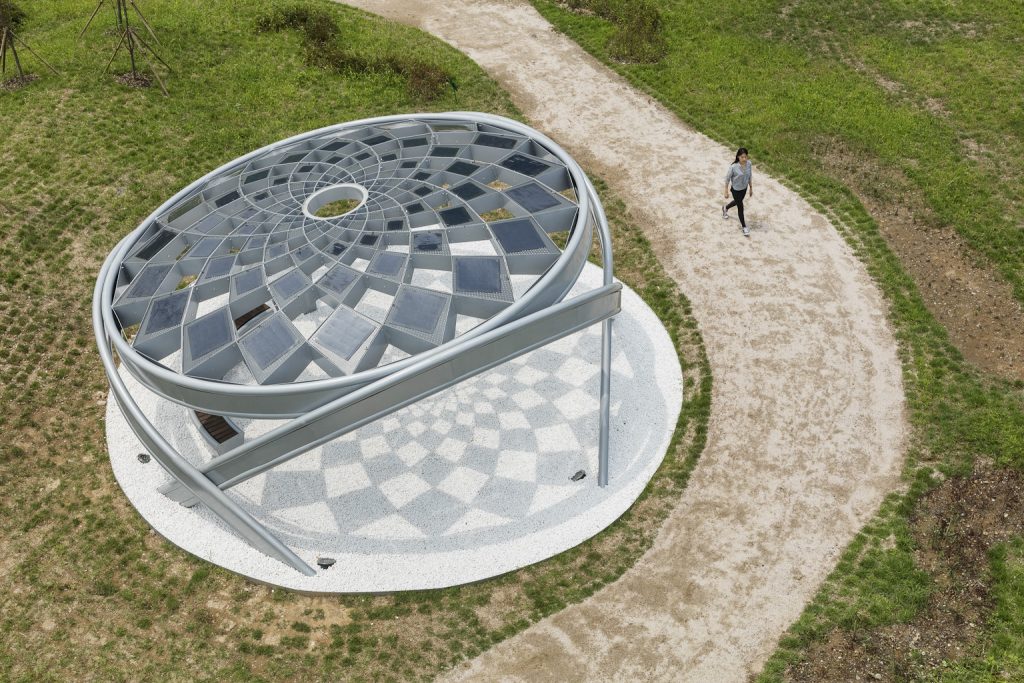 The Solar Pine roof is tilted to provide maximum energy absorption for the 54 solar panels. (Photo courtesy of Kyungsub Shin)

POSCO’s Solar Pine is built with PosMAC steel, an advanced, high-strength steel that is lighter and thinner than galvanized steel and more resistant to corrosion. PosMAC is ideal for structures like the Solar Pine, which require strong, lightweight steel that can withstand the elements. PosMAC has also been used in other designs requiring this combination including POSCO Humans’ floating solar power system, high-durability homes, auto parts, and several new green energy projects in India. 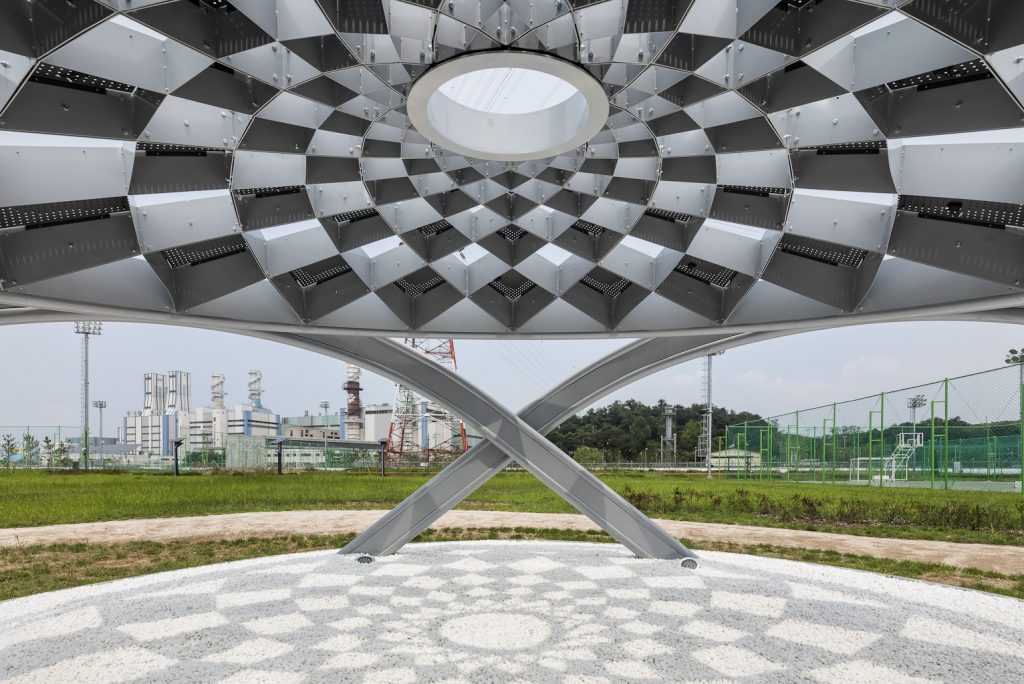 During the day, the light shines through the roof of the Solar Pine, replicating its geometric design in shadows on the ground. (Photo courtesy of Kyungsub Shin)

Steel is typically used as structural support; however, when designing the Steel Igloo, architect Kim Chan-joong decided to use POSCO’s World Premium Product PossSD, an advanced steel that offers superior strength and ductility.

The reflective surface of the Steel Igloo combined with the punctured surface creates a unique viewing experience. First constructed for an exhibition at Kumho Art Museum, it was later moved to a forest near Suwon, Korea.

The Steel Igloo is made from 177 steel sheets, each punctured with holes allowing light to break through. The combination of the holes and the reflective surface of the steel create a very unique experience for those lucky enough to see it in person.

POSCO worked with Kim during the manufacturing process, helping with the polishing, bending and reflective effect that was requested in the original blueprint.

PossSD, which stands for Super Ductile Duplex, was used because of its notable characteristics that make it suitable for an outdoor art display like the Steel Igloo.

The punctured holes of the Steel Igloo allow light to come through and create shadows on the surrounding walls.

Pangdolane – Resting in a Rock Made of Steel

Pangdolane is a wordplay on the Korean words pang-dol, a type of volcanic rock found on Jeju Island and an-ae, meaning inside. POSCO worked with multiple artists, scientists, and architects to create this public art piece that also provides a small shelter for those visiting Jeju Island. 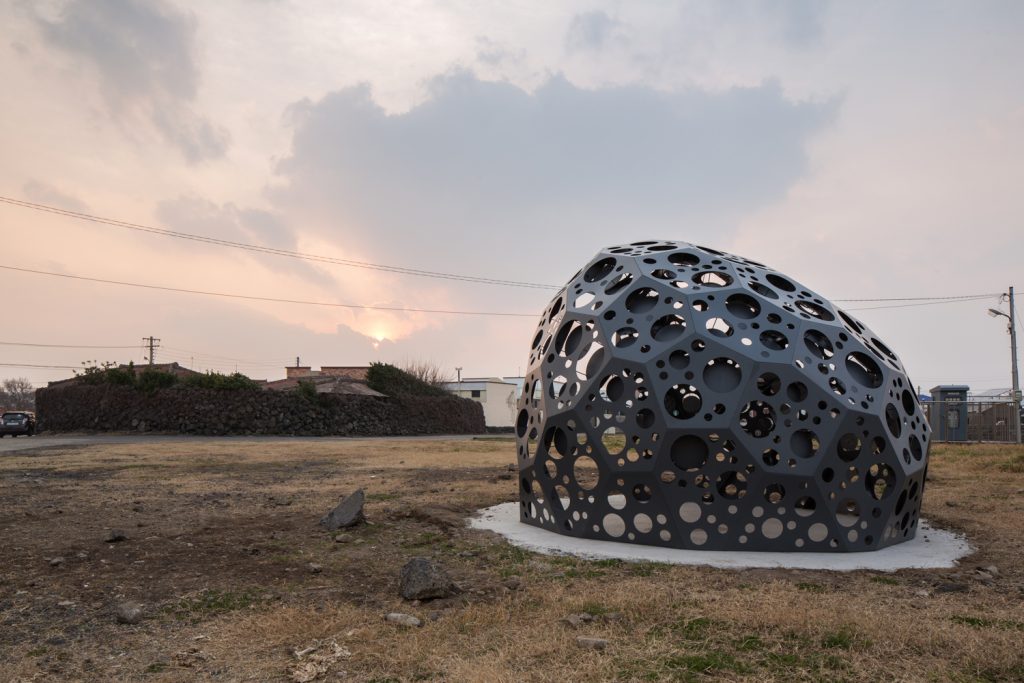 Pangdolane sits near a beach on Jeju Island. (Photo courtesy of Scale.kr)

With its gray color and holes of varying sizes, the exterior of Pangdolane resembles the basaltic rock for which it is named. Inside Pangdolane, visitors can rest while enjoying the shadows created by the design of the structure. 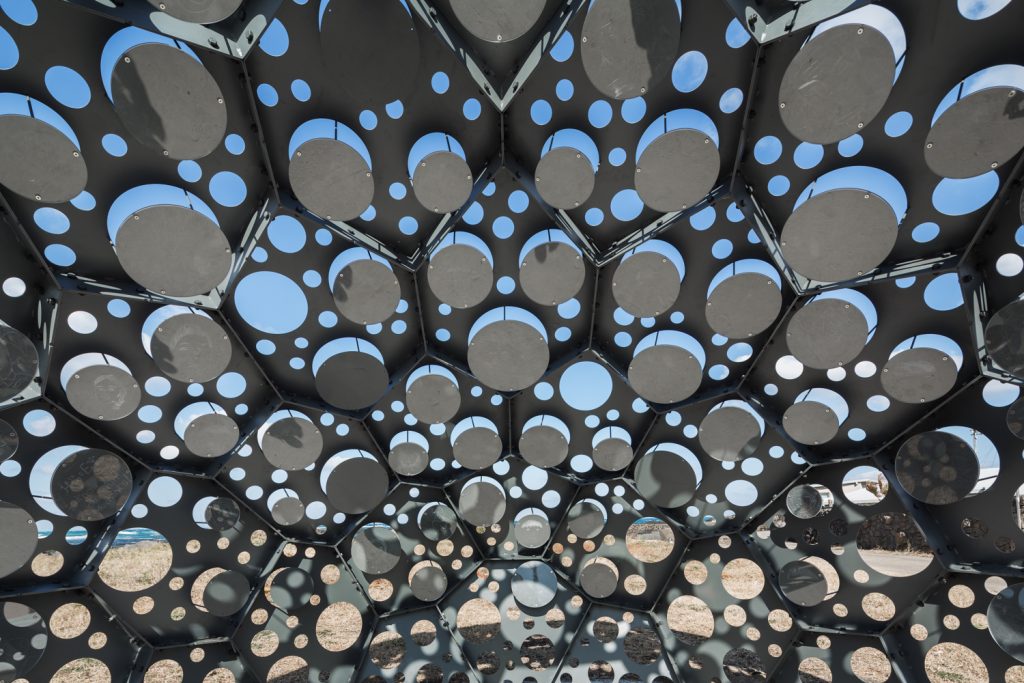 Located on a beach on Jeju Island, designers were faced with issues of corrosion. The air in coastal regions typically has a higher saline density, which causes metals, including steel, to corrode much more quickly. Therefore, POSCO’s World Premium Product PosMAC was used to construct Pangdolane. PosMAC is specifically designed to be both more resistant to corrosion and self-healing. When designing Pangdolane, PosMAC was the obvious choice as its special properties ensure that it will stand the test of time – even on the beach.

Steel is often used in buildings to make them stronger and long-lasting. But steel does not have to be behind walls and floors; it can also be used on the exterior. In each of the art pieces above, POSCO’s World Premium Products were used in order to provide specific benefits that fit each situation’s needs. Whether it is having a higher resistance to corrosion or providing a lighter solution that can be mass-produced and bolted on site – POSCO’s World Premium Products have been able to overcome many of the problems that come with working in steel to make sure that these pieces of art can be enjoyed for decades to come.