Vietnam POSCO Village: A Door to a Bright Future of Vietnam

The word ‘dream’ itself makes people hopeful. And POSCO-Vietnam is delivering this Vietnamese dream to a bright future. As various CSR activities have taken place by POSCO-Vietnam in Vietnam, we’d like to introduce a grand project that will make people dreams come true!

What is Vietnam POSCO Village? 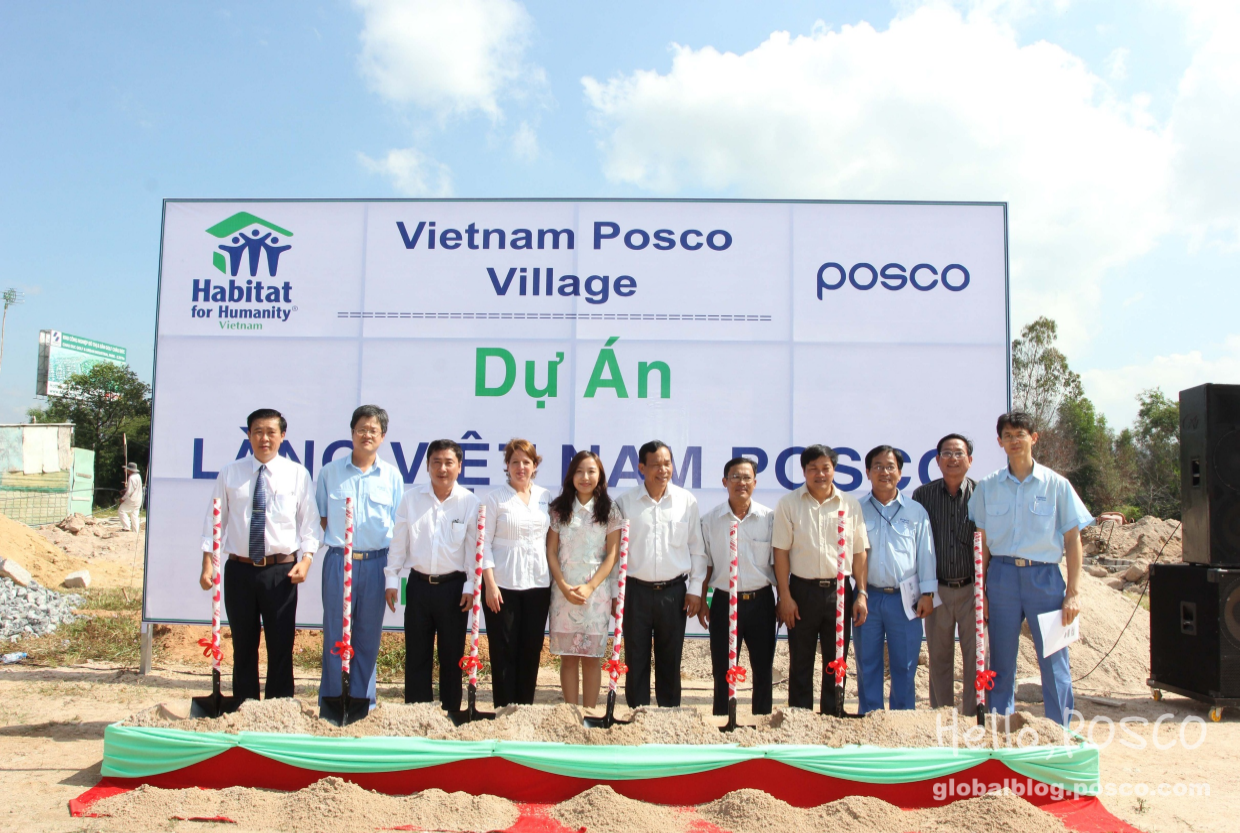 On November 27th, POSCO-Vietnam and Habitat for Humanity Vietnam (HFH Vietnam) held a ceremony for an 85-house project at Tan Hoa commune, Ba Ria-Vung Tau province. The ceremony was attended by local provincial leaders of Ba Ria-Vung Tau province, representatives from POSCO-Vietnam and about 100 local households. Consisting of low-income families, the households are mostly informal settlers by the river or on unclaimed lands. These groups of the underprivileged will restore hope by being helped into decent homes in the ‘Vietnam POSCO Village’. 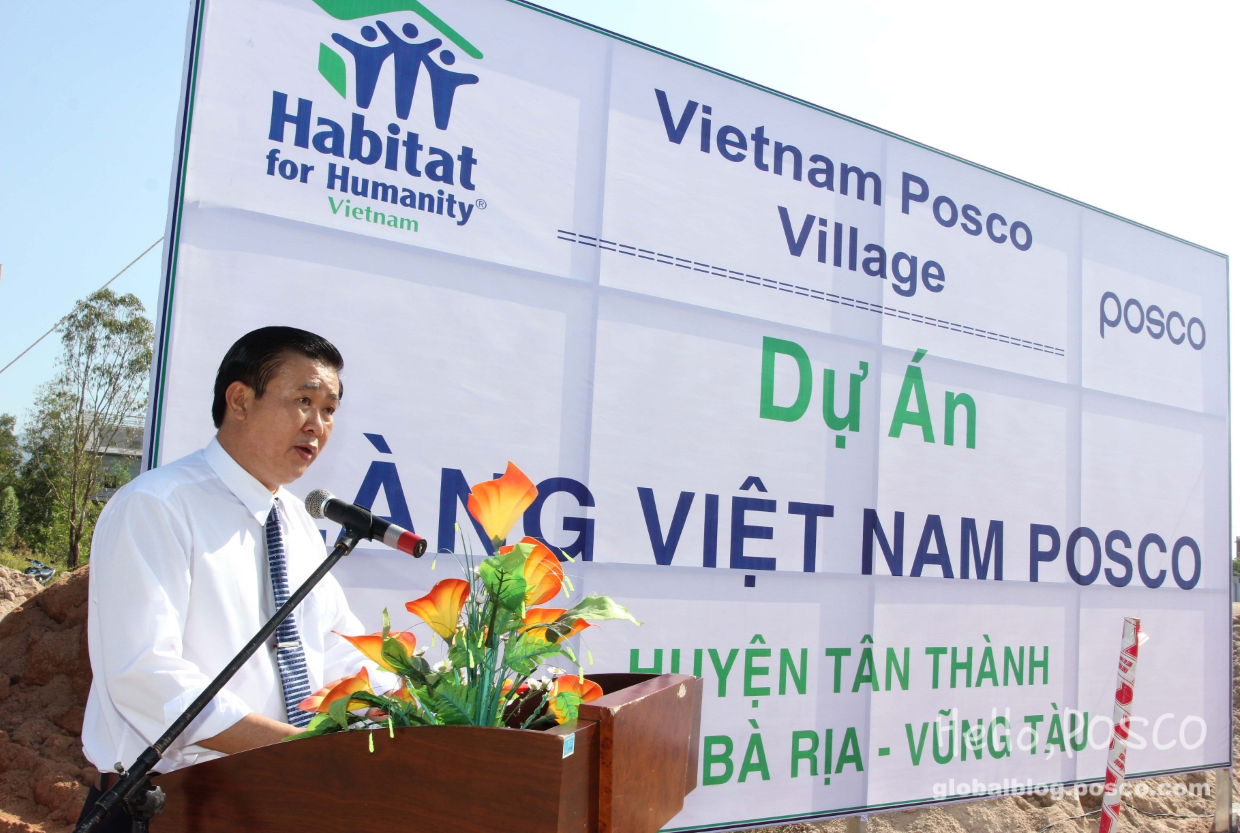 “I am sure that local authorities and poor households are very happy since the POSCO-Vietnam has initiated as from today. This is a magnanimously deep and compassionate action of POSCO 1% Foundation. This will also encourage local authorities to implement agreements with POSCO for helping residents living under difficulties for a better life”, stated Mr. Huynh Van Danh, Vice-chairman of Tan Thanh District.

The 18-month ‘Vietnam POSCO Village’ project will be implemented in two phases. Initially, phase 1 (from September 2014 to June 2015) will provide 45 low-income households with safe and adequate housing with water and sanitation facilities while phase 2 (from July 2015 to February 2016) will support another 40 households.

“This is the most beautiful moment in my life because I am going to live in the house that I have wished for a long time; no one has supported me until POSCO.  Other poor households and my family are deeply grateful to POSCO for funding and constructing these houses for us. I promise I will teach my children to have a better awareness that POSCO had helped us, and we need to work hard to lead a better life to thank POSCO”, said in tears, elderly Pham Van Phuong, 83, one of the family members funded by POSCO.

What to Expect for the Future 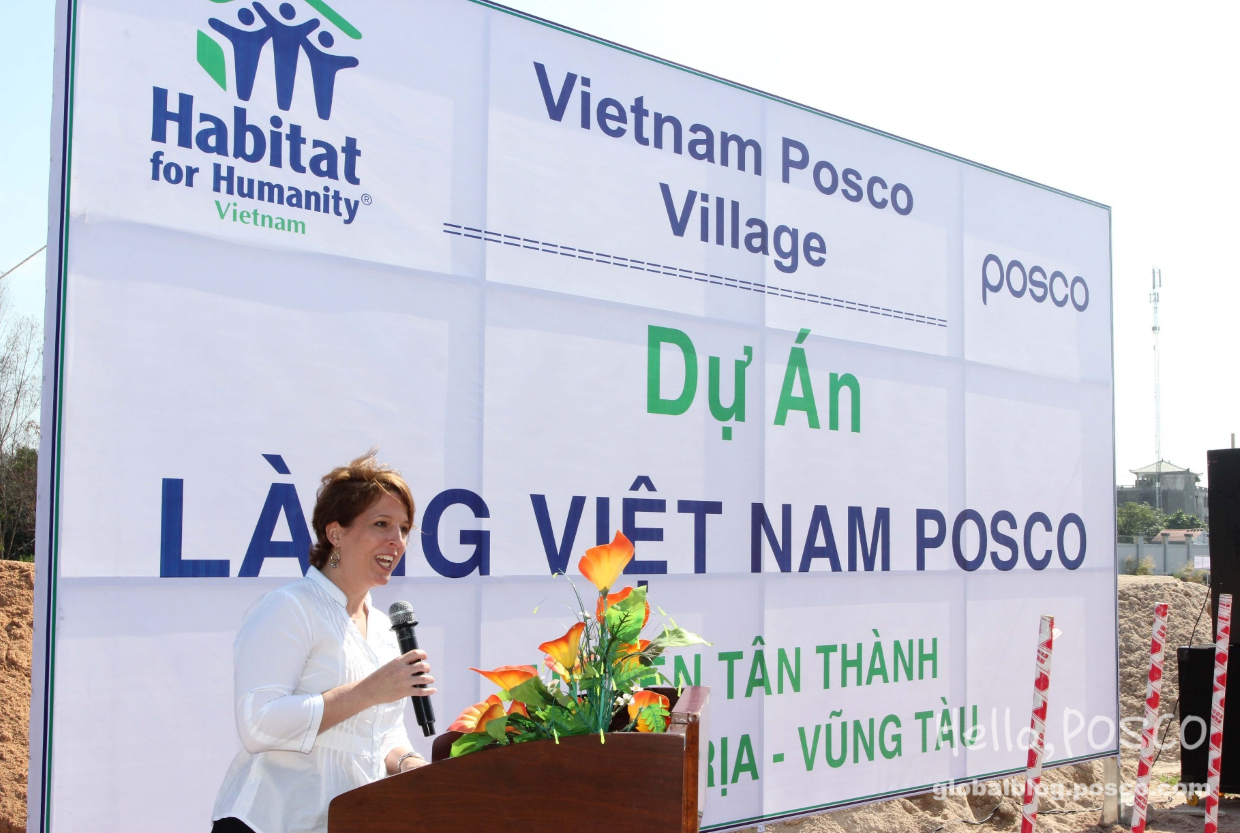 “With the aim to increase the living standard of low income households, this project partnership will achieve the dream of a decent home to those without proper shelter. With the generous funding provided by Global POSCO, HFH Vietnam will oversee the construction and provide valuable construction technical advices.” said Ms. Kelly, Director of Habitat for Humanity Vietnam. 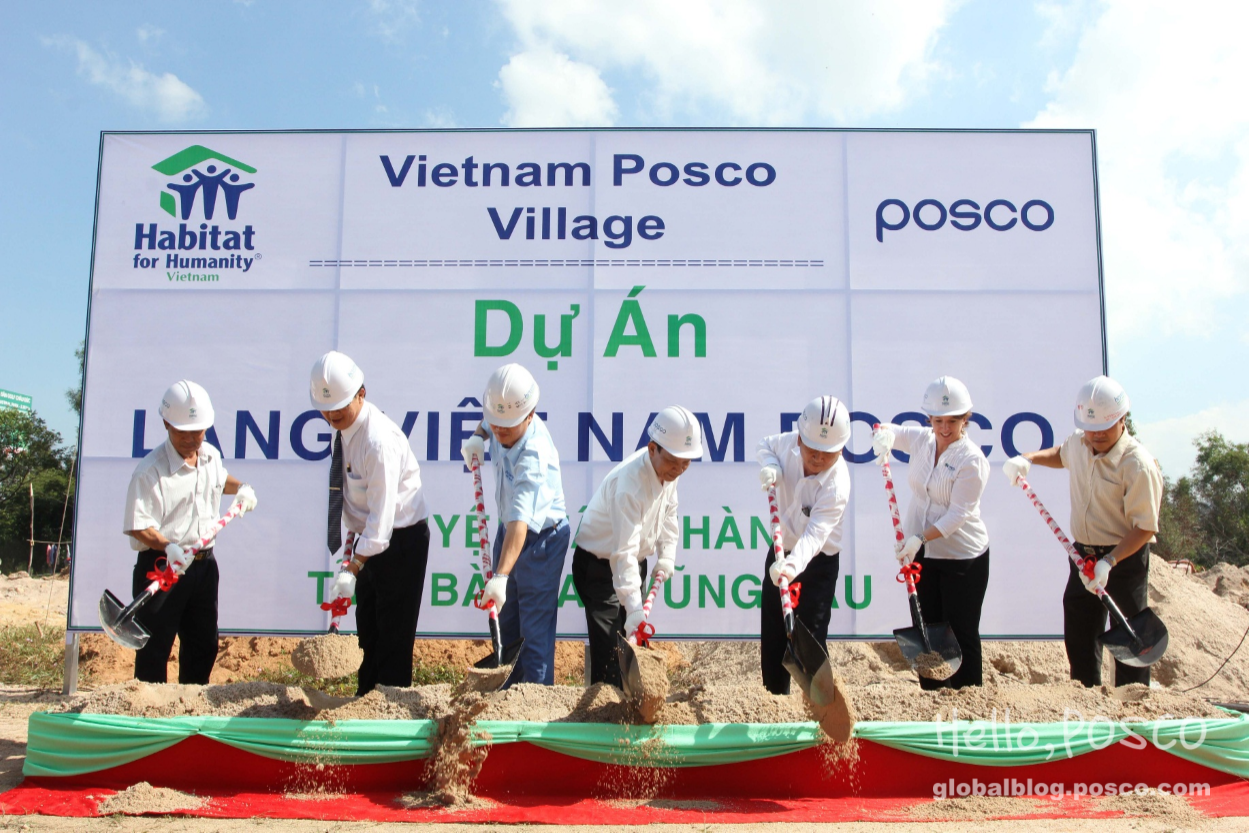 When the ‘Vietnam POSCO Village’ project is completed and comes to operation, the underprivileged families at Tan Hoa Commune will have stable and adequate homes for staying in and the homes are also bases for them to build a happy family, earn for living and have a better life for their children in future. 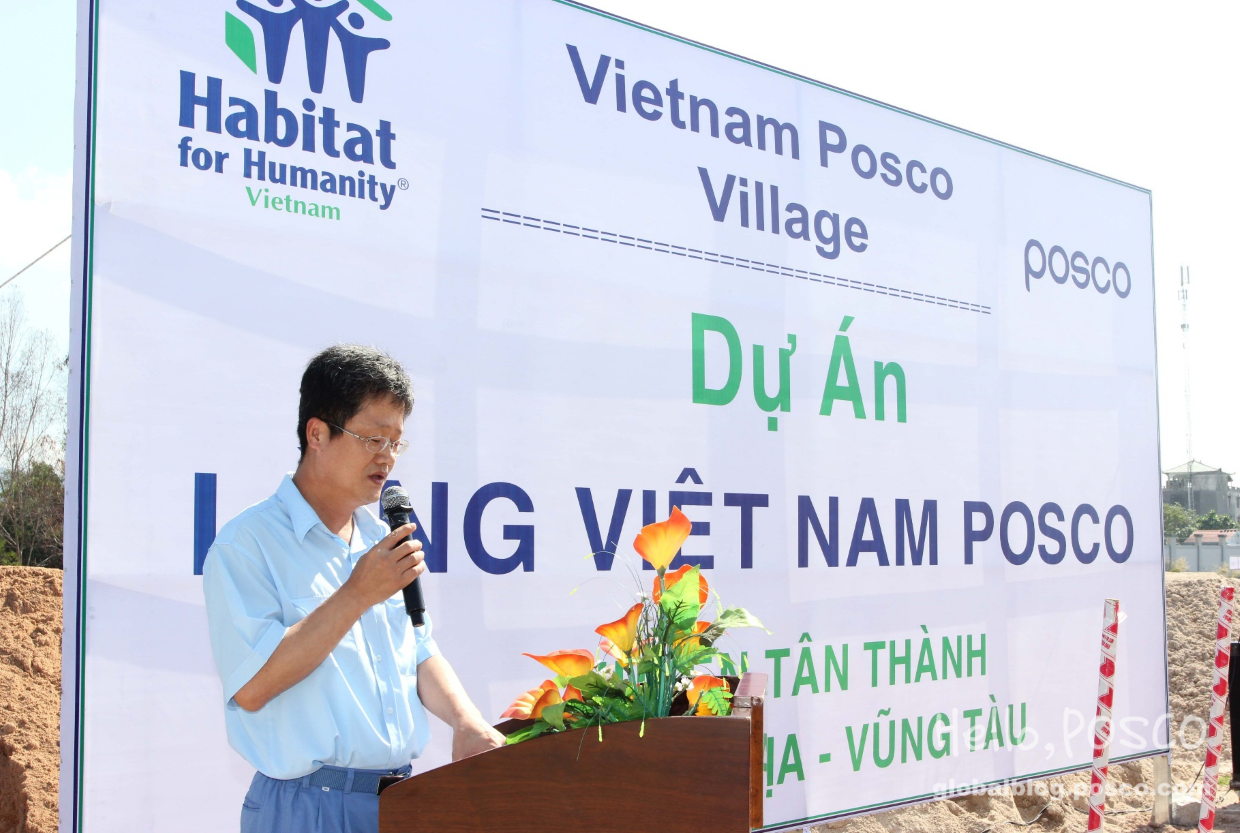 “I hope that this project will bring a home of their own to the local poor people. Just as the proverb, “Stable home, stable business”, I hope the project will support and enable them to rise and overcome difficulties. So that they can shape a life of adequateness, comfort and happiness”, said Mr. Yun Yang Su, General Director of POSCO-Vietnam.

Other CSR Activities of POSCO-Vietnam

Not enough with only building a village, POSCO-Vietnam has been putting efforts to maximize improvements in local community’s well-being. In links below, you can learn more about POSCO-Vietnam’s steps toward cultivating the better future that were introduced in our previous posts. 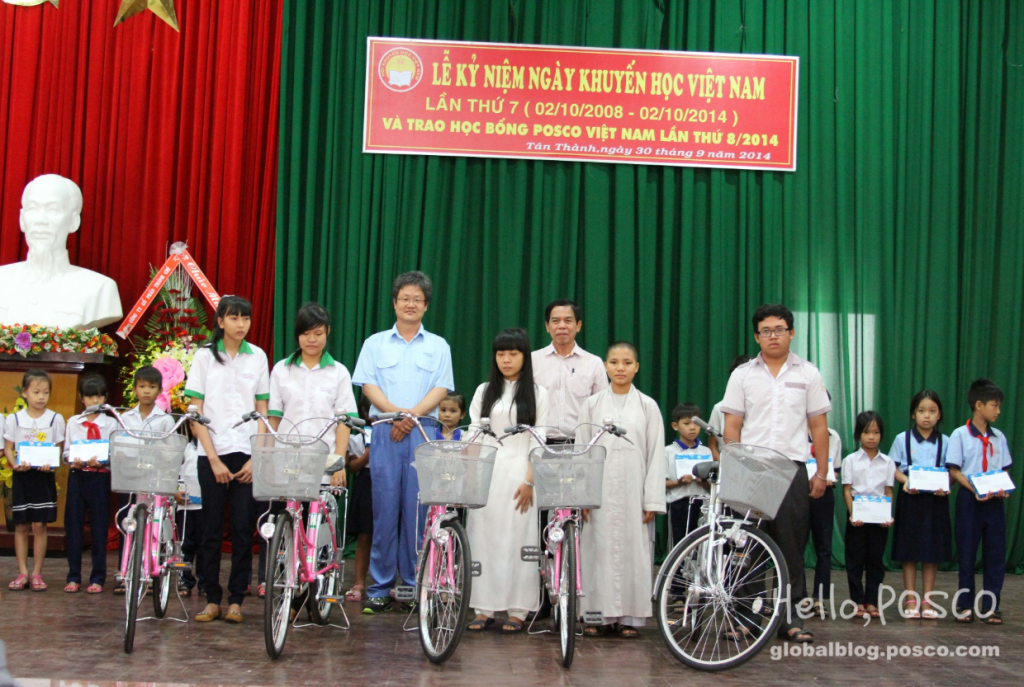 In academic aspect, POSCO-Vietnam is supplying scholarships for local student 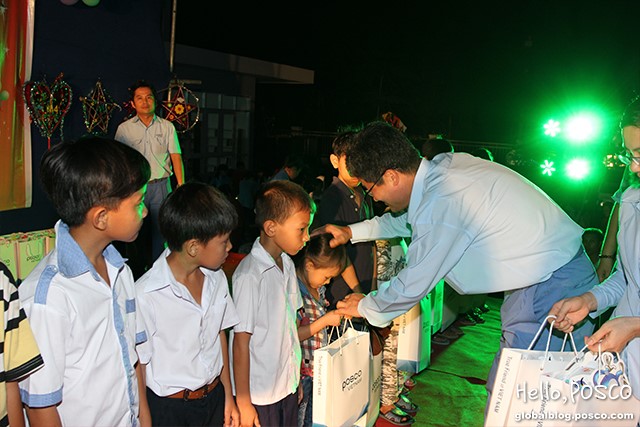