As a global social enterprise, POSCO is well-known for its numerous activities that have been contributing to social and economic development both at national and local level. Today, we would like to share the stories of POSCO-Vietnam’s scholarship programs.

POSCO-Vietnam has been providing scholarship programs for schools of Tan Thanh district in Ba Ria-Vung Tau province and for students of Korean Studies Department at University of Da Lat, in Lam Dong province. In addition, through POSCO Asia Fellowship in Vietnam, POSCO-Vietnam has granted the POSCO TJ Park scholarships to excellent students of Vietnam National University- Ho Chi Minh City. 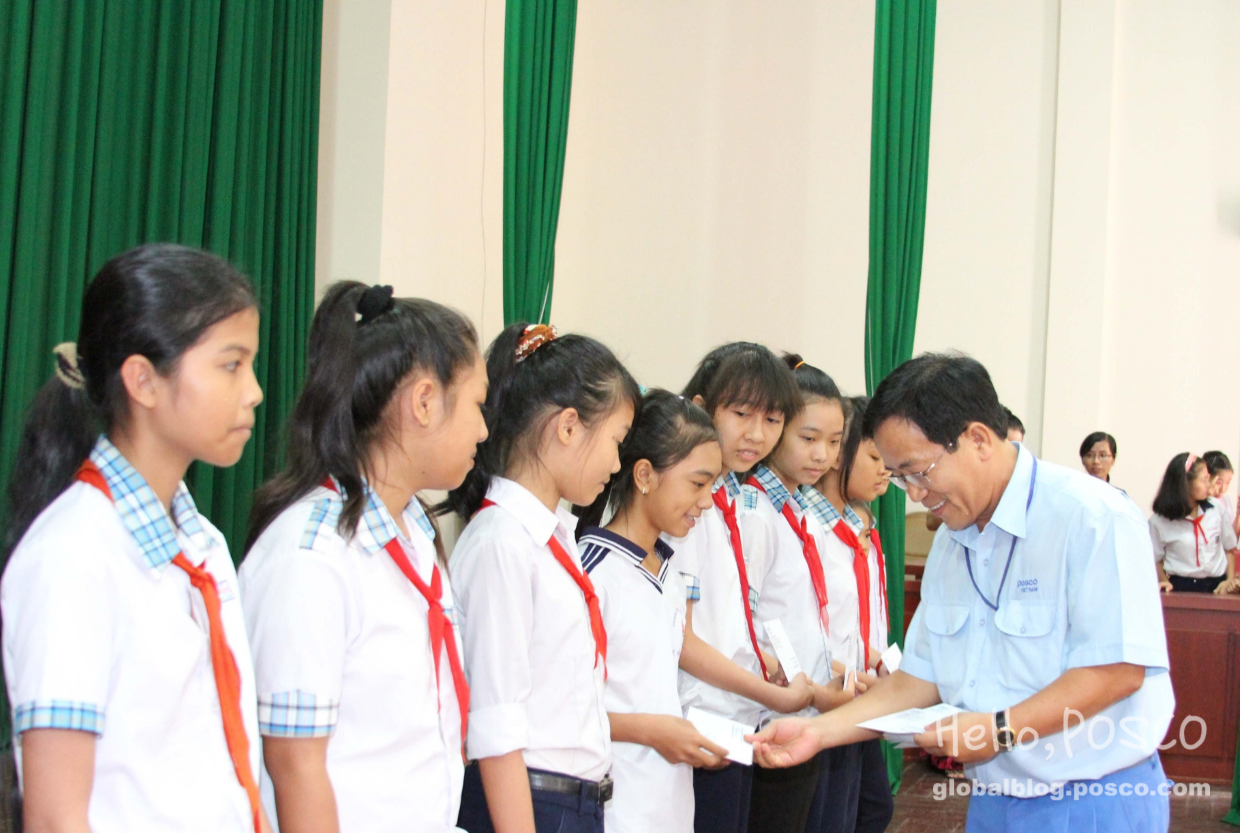 Tan Thanh is a district where POSCO-Vietnam is operating its business. Across the district, there are 37 schools of which almost every student is studying under poor condition. Recognizing this situation, POSCO-Vietnam decided to launch a scholarship program as the branch initiated its business in 2006. Since then, POSCO-Vietnam annually grants around 130 scholarships and 10 bicycles to many students of impoverished conditions. 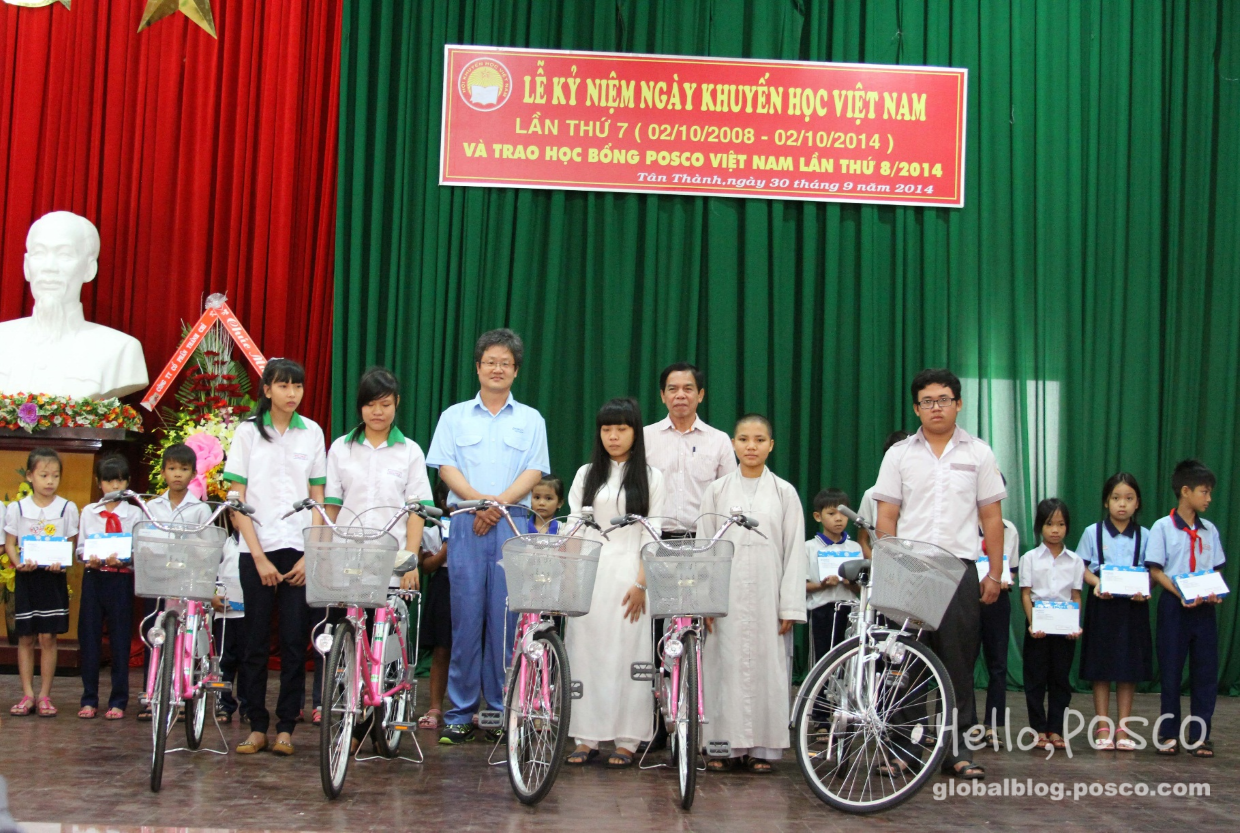 Living in Tan Thanh district’s Toc Tien village, a student named Nguyen Thi Hue, grade 8, receives a scholarship from the program. Her father is a xe om driver (motorbike taxi) and her mother is an amateur embroiderer. However, their combined incomes are insufficient to support and educate their three children. Every morning, she gets a bike lift from her friends or rides from her father to get to her school which is 3km away from her home. When she fails to get a ride, she needs to walk all the way to the school.

“Since today, I don’t walk anymore because POSCO-Vietnam gives me a bike and notebooks for school. Thank you friends for lifting me until now and POSCO-Vietnam for these precious gifts”, said Hue.

Around 1,000 students received scholarship with this program since 2006. 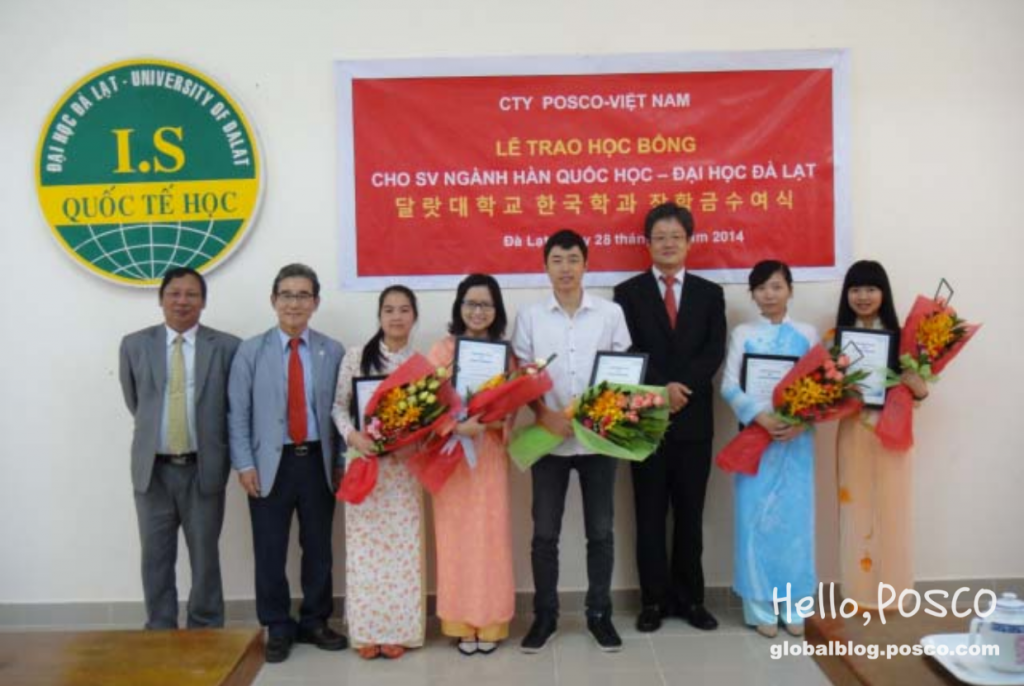 With the purpose of finding the best employees for interpreter positions (Korean-Vietnamese), POSCO has been maintaining a friendly relationship with University of Da Lat since 2009. For the past six years, POSCO-Vietnam has been granting 30 scholarships to the students of Korean Studies or Oriental Studies Department at university of Da Lat.

On October 28, POSCO-Vietnam scholarship was granted to five excellent students at a meeting hall of University of Da Lat. “We hope that these scholarships are encouragements for students to make their efforts in studying and pursue their own dreams, becoming the pioneers for the country’s development. We believe the scholarships of POSCO-Vietnam will be an initiation for the students’ future success”, said Yun Yang Su, General Director of POSCO-Vietnam. 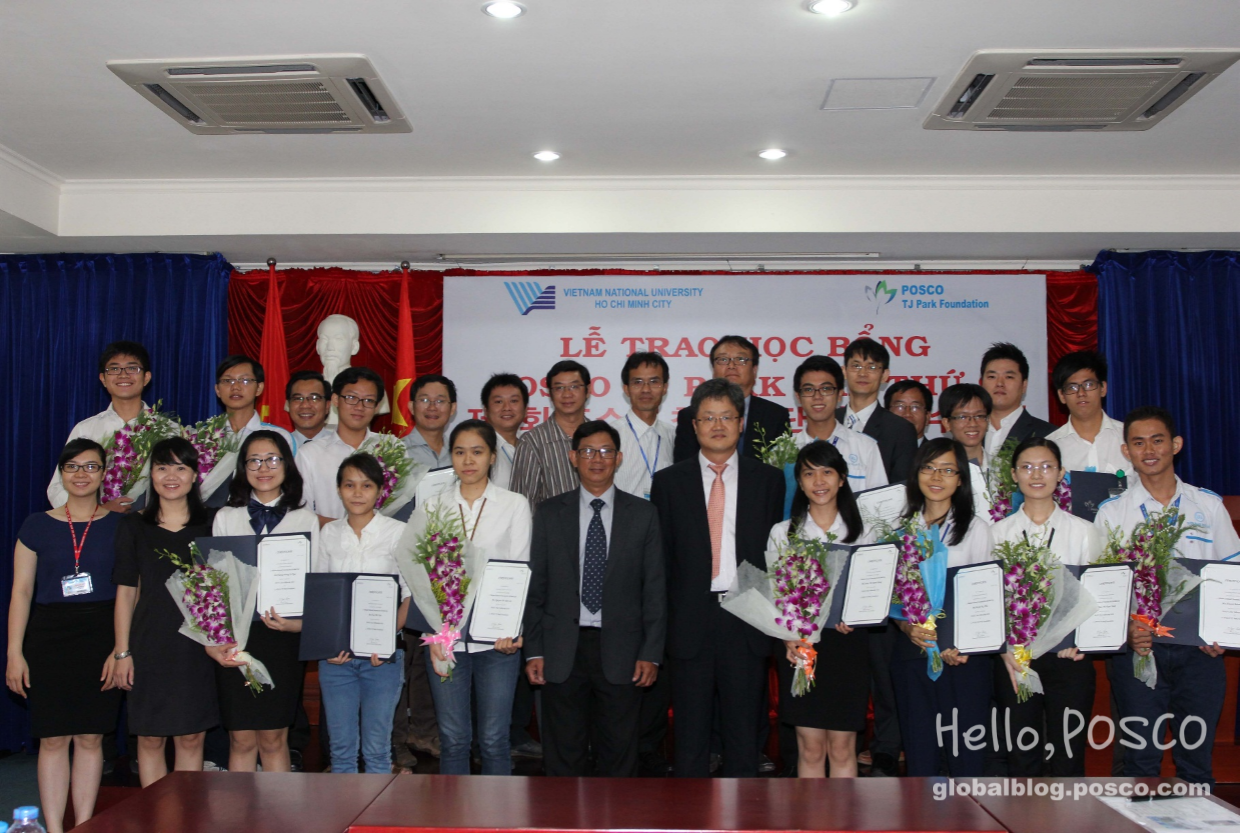 The POSCO TJ Park Foundation, a non-profit organization that nurtures prospective young talents in Asia, has been providing more than 150 scholarships to students of the largest and most distinguished university in Vietnam, named Vietnam Nation University – Ho Chi Minh City. 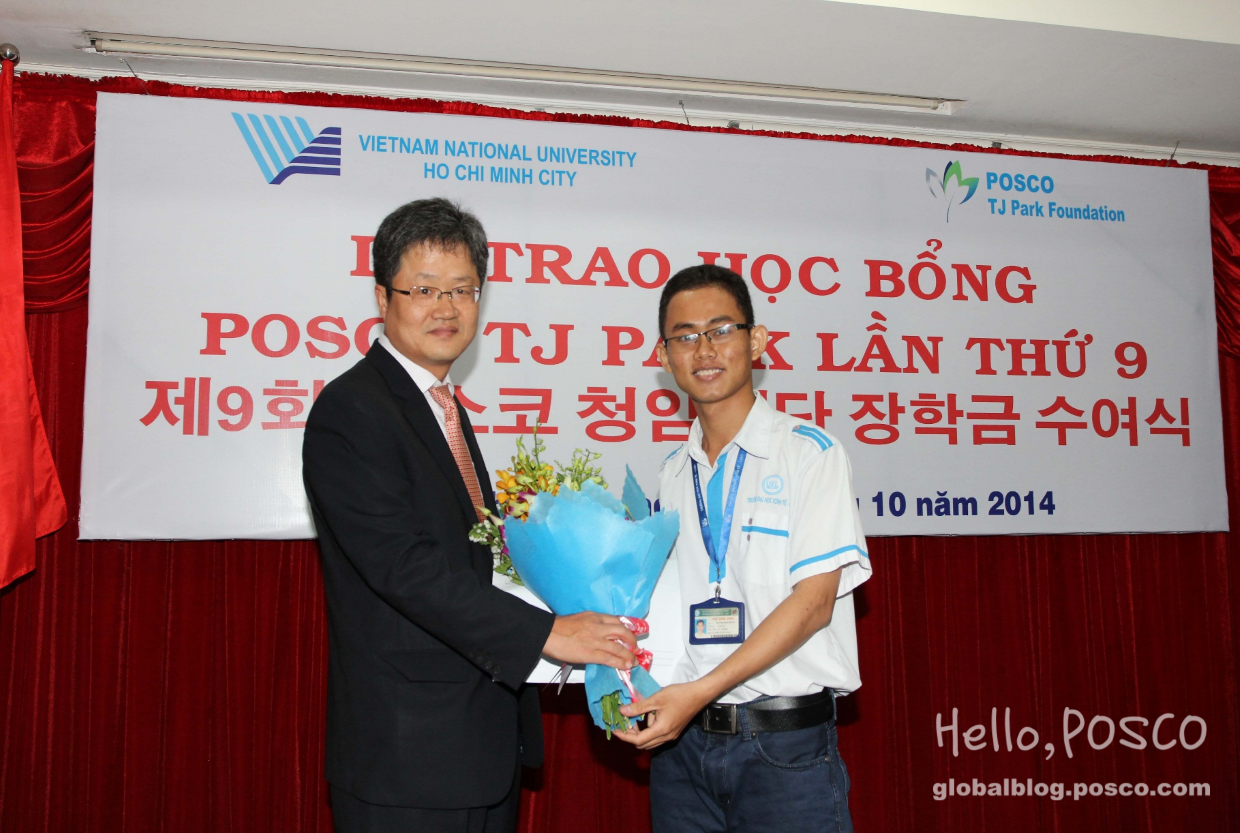 “POSCO TJ Park Scholarship played an important role in our lives for us by encouraging us and making us a step closer to our dreams.”, said the 4th year student, Huynh Minh Thuan.

Representative for POSCO TJ Park Scholarship Foundation, Yun Yang Su-POSCO-Vietnam’s General Director hoped that the scholarship recipients would make their efforts in studying so that they could take part in the training courses for MA or Ph.D in Korea, sponsored by POSCO Asia Fellowship, and get a chance to learn about Korean culture as well. He also stated that recipients would prove their qualifications to become gifted leaders contributing for Vietnam’s development and Asian region as well.

The POSCO Asia Fellowship supports the prospective leaders of Asia by providing full tuition and living expenses to young talents from Asian countries as they enroll in master’s or doctoral programs at some of the most prestigious Korean universities or institutions and experience the Korean society and culture. So far, the fellowship has sponsored 39 Vietnamese students to take courses in Korea since its establishment.

To Create Bright Future for Students
POSCO-Vietnam does not only offer occupations for parents but also supports their children for better academic circumstance through its scholarship program. As POSCO-Vietnam build POSCO Village for the local people living in poverty, the branch will continue to create an academic environment to educate the young generation for the bright future of Vietnam.