Almost 100 years since it was first proposed, New York City’s Second Avenue subway line finally opened to the public on January 1, 2017. The new line offers some relief to commuters on the Upper East Side who have gone without rapid transit for nearly 70 years when the last El trains were torn down in 1942.

The idea for a Second Avenue line was first brought up in 1920 when NYC’s public transit was at maximum capacity moving around 1.3 billion riders per year having doubled since the pre-war years. When an official plan was introduced in September 1929, home prices increased 50% almost overnight. However, because of the Great Depression, WWII, and then the Korean War; the city did not break ground until 1972. But then in 1975 the project was abruptly stopped when the city ran out of money. Revived again in the mid-nineties, construction on the current line started in 2007. 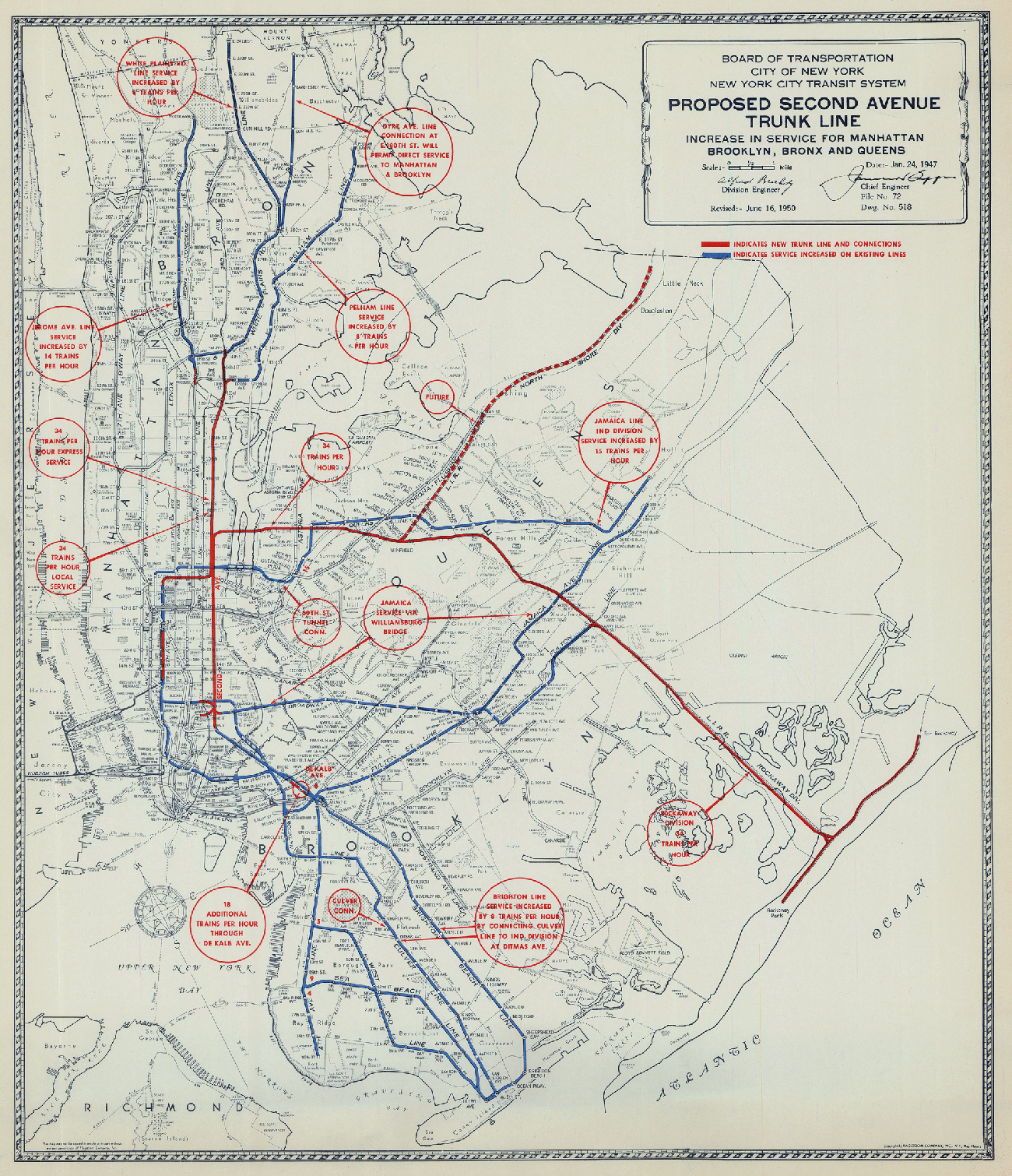 “But it is highly improbable that the Second Avenue subway… will ever materialize.” – New York Times, January 17, 1957

Aside from the financial and political reasons that delayed the train for a century, the fact is that it is much more difficult to construct a new subway line in today’s New York than it was in the 1920s. When New York’s first subway line opened in 1904 there were less people, less buildings, and less regulations. At that time, crews would use the “cut and cover” method where they would close the road, dig up the street, and then cover it back up when finished – a feat that would be nearly impossible in today’s bustling Manhattan.

In today’s New York, the city must use explosions (video) to help make way for the huge boring machines, reinforced with high-strength steel, that are able to cut underneath the foundation while cars and people are left undisturbed on the surface. Running 24 hours per day, these tunnel boring machines can dig around 50-60 feet per day leaving a huge underground path for the trains.

While it is obvious that steel would be used in these projects, the sheer amount is astounding. From the tunnel boring machine to the steel wheels that ride on the steel tracks to the stainless steel subway cars — steel is everywhere. In fact, it was the advances made in steel technology in the 1880s that made New York’s first subway a reality. After the great blizzard of 1888 shut down city streets and brought down the electric power grid, the city started to make efforts to put things underground. In addition, the same advances in steel provided for taller and taller buildings that brought more and more people; so, the city needed a new form of transportation that could move everyone from their homes to their jobs. The NYC subway system started in 1904 with just 28 stations – it now has 468 stations running a total distance of 1,055 km (656 mi).

From the steel beams to the steel tracks to the escalators carrying passengers – steel is everywhere. (Photo courtesy of MTA)

Subways have redefined urban life in the modern era. This feat of engineering, like so many other urban wonders, is only possible because of the steel used to dig, build, and operate the subways. Watch the short film below (11:31) to see how the Second Avenue line began – and how it ended 97 years later.