ISSUE  The ‘Dreams’ of future generations

As children grow in height each year, their dreams change year by year as well. What dreams do children have these days? 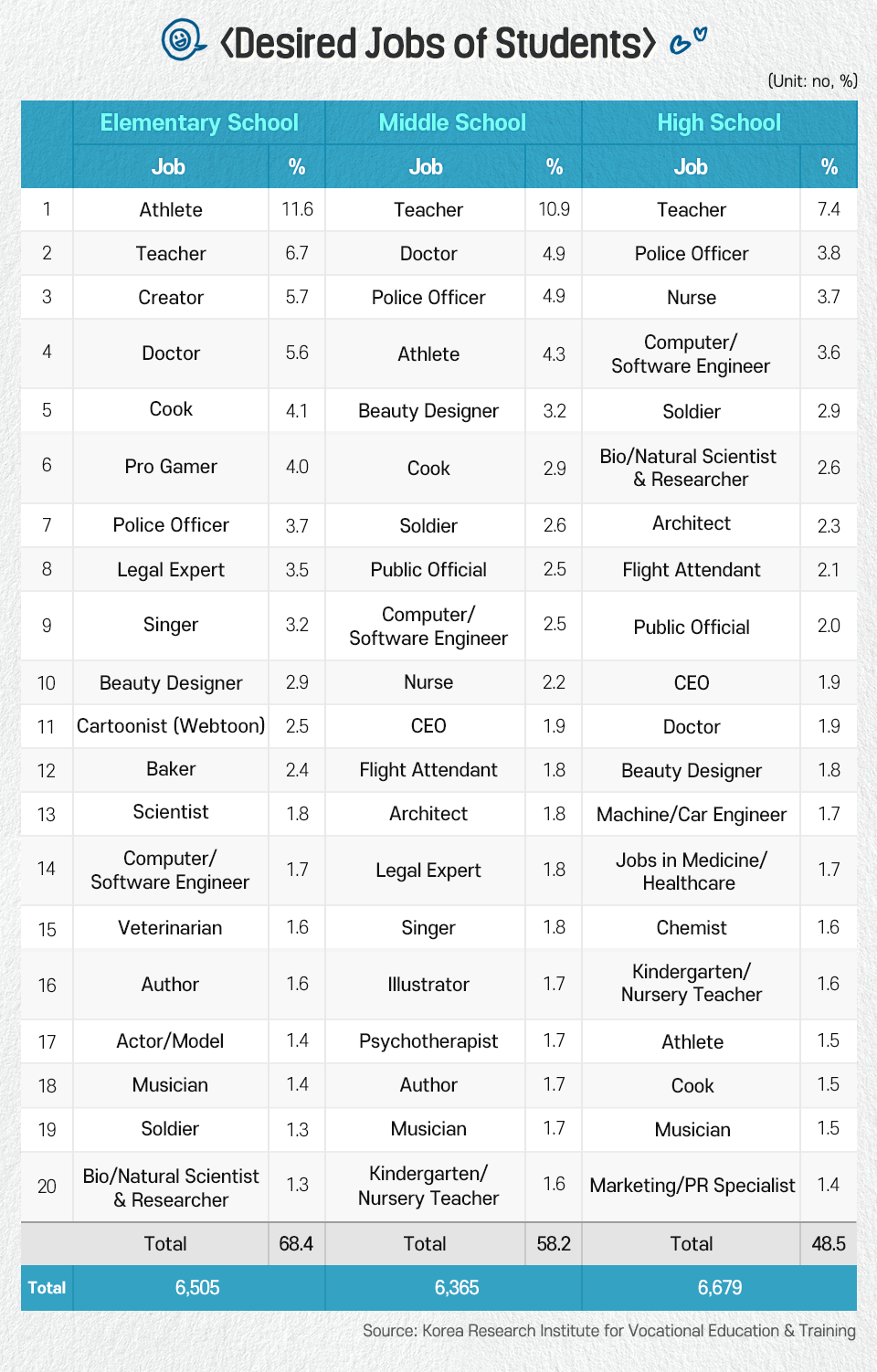 The fact that children’s dreams change rapidly every year reflects how fast our society is changing. For this reason, vocational education in modern society requires more delicate and detailed plans than ever before. However, universal vocational education for all is challenging in reality. This is especially the case for underprivileged children likely to be in blind spots.

According to a survey of 1,100 elementary, middle, and high schools last year, the teachers in charge of vocational education stated that efforts to consider underprivileged groups, such as multicultural families, were insufficient compared to other factors while establishing the educational plans. 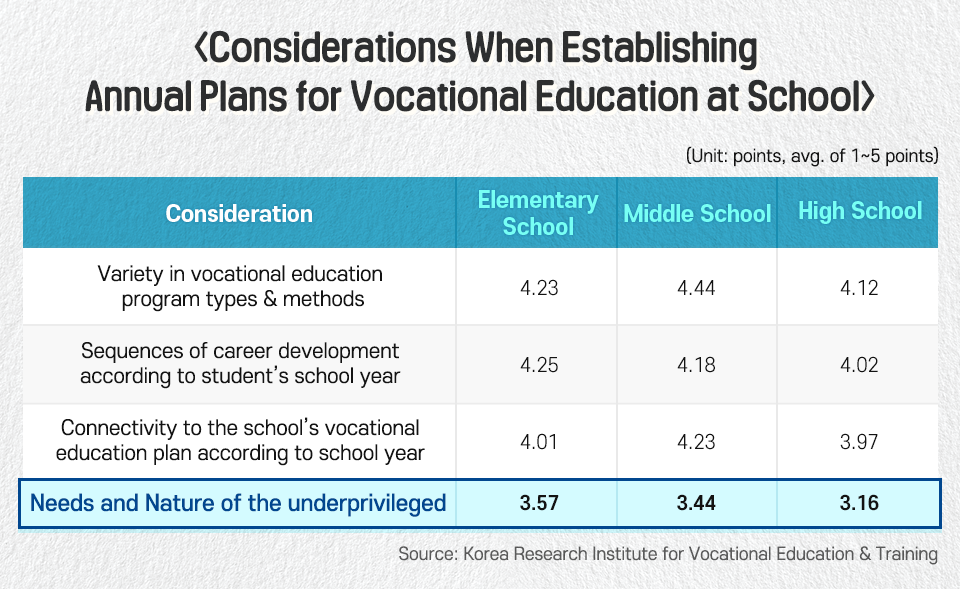 A dream seems something like a vague hope, difficult to have, and more difficult to achieve. It is the responsibility of the older generation to help the future generation specify and realize their vague hopes. Those in an environment vulnerable to fulfilling their dreams need only a little more help than others.

To ensure that not a single child is excluded from ‘dreaming’, POSCO operates three programs mainly. The first is ‘Do Dream,’ a support program for the independence of children leaving welfare centers. The second is the ‘Chin Chin Rainbow’ project, which provides support for children from multicultural families, and the third is the ‘Out-of-school Children’ project, which offers basic education support for global youths living in harsh conditions.

Do Take Action, Do Dream!

Park, who has lived in a welfare center for a long time, said he suddenly made up his mind while watching his classmates taking exams in their second grade in high school.

Although he had always taken the last place in the entire school, he worked hard and was able to enter the Department of Social Welfare at a university he wanted. Park’s dream was to become a social worker.

“I chose the Department of Social Welfare because I wanted to give back as much as I received. Since I was from a completely different background from others, I always worked hard at university as well.”

Park’s grades were good enough to receive a full scholarship, but studying and earning living expenses at the same time wasn’t an easy task. To make matters worse, a friend took advantage of Park’s self-reliance settlement fund, which was given to Park as he left the welfare center. However, Park wasn’t in despair. He took up a part-time job to cover tuition and living expenses, and even went on to graduate school.

Even though Park was more positive than anyone else, a sense of helplessness and despair struck him as hardships in his life continued with no end in sight. Park gave up his dream of becoming a social worker and got a job at a small event company. However, he soon ended up quitting his job and was wandering around. And this was when ‘Do Dream’ lent Park a helping hand. 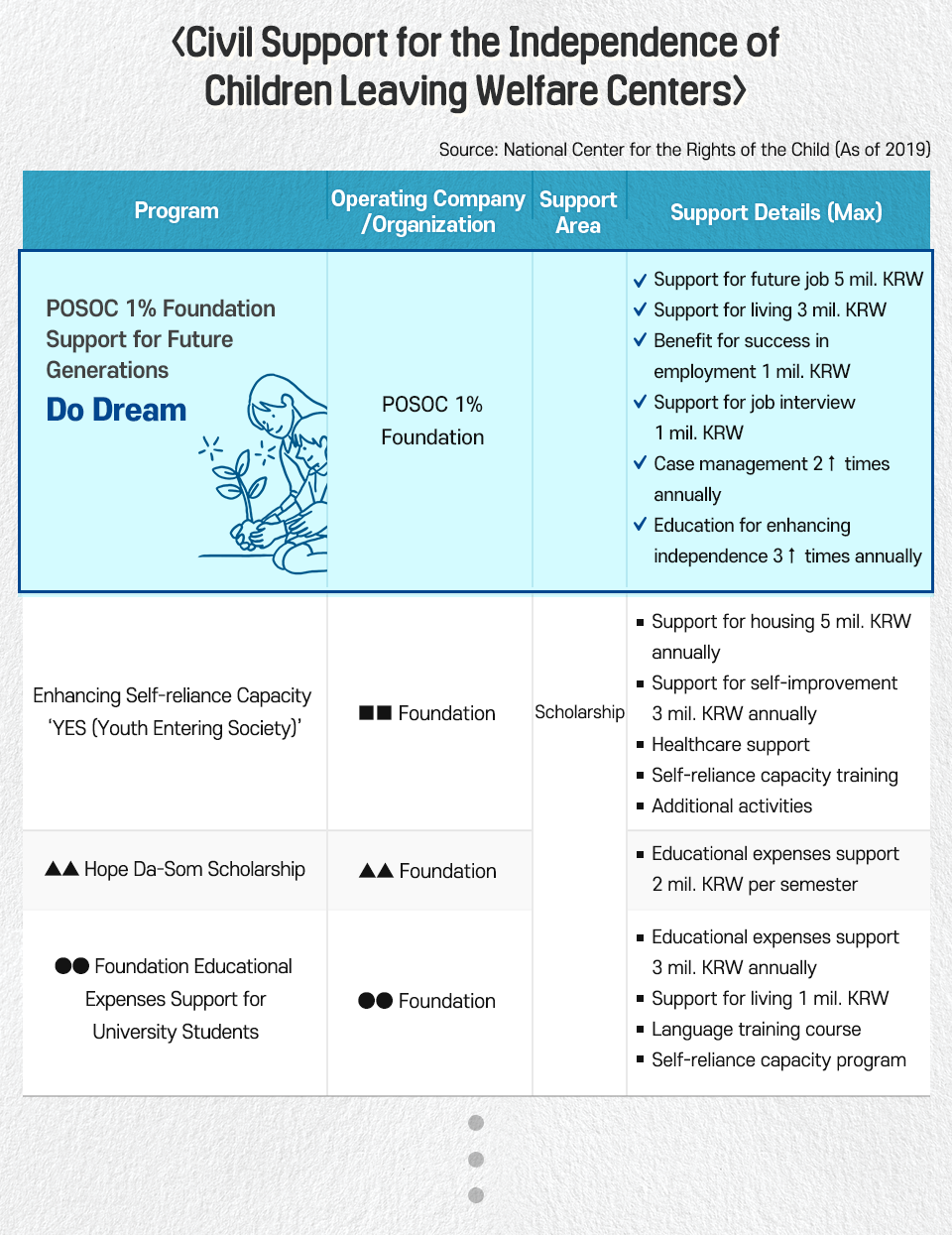 Around 2,600 children leave welfare centers per year. The National Center for the Rights of the Child carries out various programs with numerous non-profit foundations to support the self-reliance and employment of the children leaving the centers on turning 18, and POSCO’s ‘Do Dream’ is one of these programs.

POSCO 1% Foundation provides up to 10 million KRW per person, including annual education expenses, living expenses, interview preparation fees, and benefits for successful employment, to help the children leaving the welfare centers focus on career development and succeed in finding a job.

POSCO 1% Foundation is a non-profit foundation operated with funds donated — 1% of the monthly pay — by employees and executives of POSCO Group and its partners. The fund is managed as a matching grant, with the company matching employee donations one-to-one.

While most of the civil support for the independence of children leaving welfare centers are regarding their tuition fees when entering college, POSCO’s program, ‘Do Dream,’ is quite different. The program supports all education that would help in the economic independence of these children, whether or not they go to college. Those preparing to get a job can apply for the program until the age of 26 after leaving welfare centers, and this was the case for Park.

Park decided to realize his dream of becoming a social worker with the support from ‘Do Dream,’ and after submitting several resumes, he finally succeeded in getting a job as a social worker at a welfare center.

“Thanks to Do Dream, I was able to prepare for my job with a comfortable mind, considering only my aptitude and plans. Even after the support ends, I will continue to move further and prepare for the social worker exam as well. Wouldn’t I become a social worker with good influence to change the world then?”

As a measure to help those children leaving welfare centers to not give up on their dreams, POSCO 1% Foundation has expanded the number of recipients from 20 to 35 this year and has also increased 1:1 case management sessions from two to ten times a year. In addition to the support funds, the Foundation carries out other programs that can be of practical help, including special lectures on employment, mentoring, and regional gatherings.

‘Chin Chin Rainbow Project’: For Those From Different Backgrounds

The Ministry of Gender Equality and Family operates a variety of youth support policies, including those youths with a migrant background. Under Article 18 of the Youth Welfare Support Act, youths with a migrant background are youths from multicultural families or are North Korean defectors settling in South Korean and require social, cultural adaptation, and language learning support. 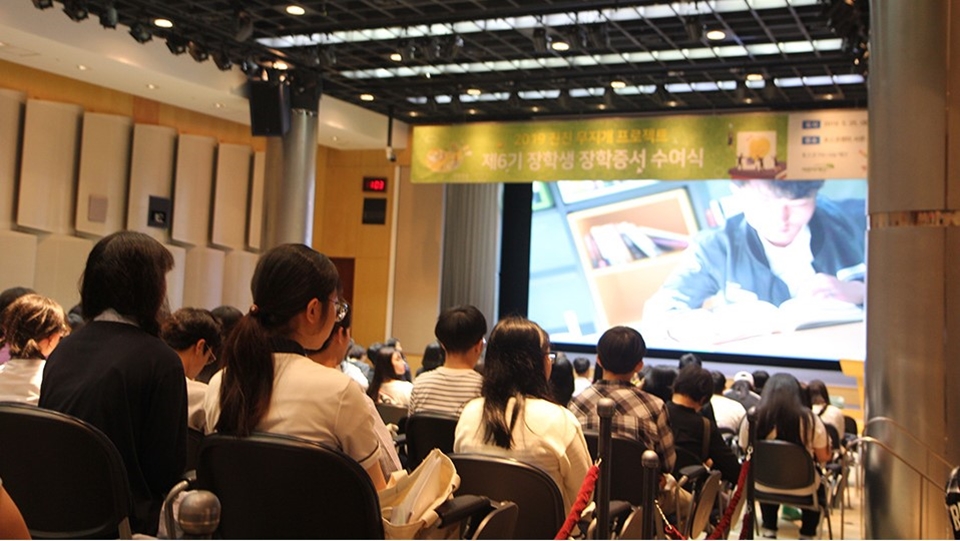 POSCO 1% Foundation operates the ‘Chin Chin Rainbow’ program for youths from multicultural and underprivileged families with high growth potential. The program provides vocational education expenses in various fields, such as arts, sports, and IT, and conducts 1:1 mentoring and summer camps. Since 2014, a total of 371 youths have received support, and starting from last year, the number of recipients has been doubled — from the previous 60 — mainly in Pohang and Gwangyang.

POSCO 1% Foundation has been carrying out the ‘UNESCO Project for Out-of-school Children’ since 2018, with a mission to ensure that all children around the world can receive basic education. There are 64 million children worldwide who cannot even go to elementary school due to unavoidable reasons, such as poverty, disability, violence, drugs, child labor, human trafficking, war, and refugees. POSCO is providing basic education and meals, and acting as a refuge for 1,150 Thai and Indonesian children living in these conditions so that they can dream of a new future.

In addition, POSCO 1% Foundation has been operating the ‘1% Art School,’ a program that helps children in Pohang and Gwangyang experience various art activities, and ‘Science Beyond Imagination,’ an experiential science education program. POSCO TJ Park Foundation operates the ‘Vision Scholarship Program’ to relieve the gap of education opportunities in Pohang and Gwanyang, and also a mentoring program for university students, ‘POSCO Dream Camp’.

POSCO’s support for future generations will continue until the day comes of a world everyone and anyone can dream!