COVID-19 has affected our society for the past few months. Lately, while the spread in Korea is in decrease, the virus has become a global pandemic. It has changed our everyday lives with apparent impacts on various sectors, such as social, educational, economic, and industrial sectors. We have never experienced this before, and it even seems as if we’re seeing the Butterfly Effect — ‘the flapping of a butterfly’s wings in Brazil causing a tornado in Texas’ — in real action.

ISSUE The Unbearable ‘Hyperconnectivity’ of Being

With the COVID-19 crisis, a close connection was observed among all the existing components in our lives including the state, society, economy, and industry.

“Hyper-Connected Society,” is not just a term describing phenomena in the cyber world. It is applied to the actual reality we live in, which in turn makes us realize that it takes more than a single person to make a safer and better world. 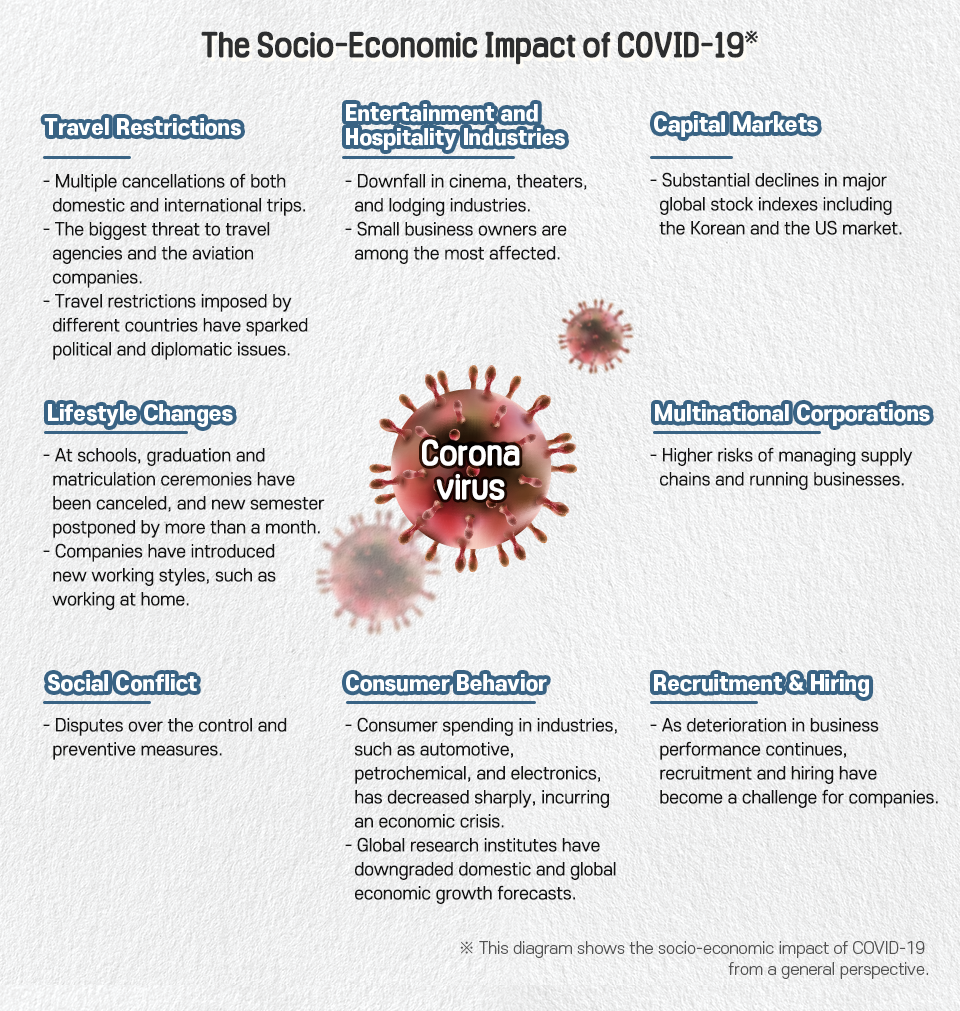 The defense strategy to fight against the virus in the hyperconnected era is “Untact” and “Social Distancing” that have to do with cutting up the existing connection. Ironically, the power to overcome this situation is ‘staying together.’ How do the two go together? The trick lies here — social solidarity. It’s about the members of society, including the state and local government, quarantine task force, medical professionals, as well as citizens and corporations, to work together in their respective roles and join forces.

Although COVID-19 is all over the news and the media, the virus isn’t the only concern confronting our society today. Youth unemployment, economic inequality, and problems associated with socially vulnerable groups including the elderly, disabled, and multicultural families are some of the many long-standing issues.

Corporates are indeed playing their parts respectively, facing these challenges. By utilizing accumulated assets, capabilities, and their businesses, they help in resolving social problems and overcoming crises. In turn, society acknowledges and credits these companies. This exchange creates a solid ring that enables both corporates and society to coexist in harmony.

The true value of business activity is mainly presented in two ways: 1) Meeting the needs of society businesswise, and 2) Demonstrating its ability to cope with the challenges of given times. In fact, these are apparent in numerous cases with leading companies around the world.

What about POSCO? POSCO had announced itself as “Corporate Citizen,” and committed to participate in solving social problems and contribute to creating a better world. So what actions have POSCO taken?

Empathy and sympathy. These two qualities would be the first thing that comes to mind when confronting the weak sides of society. To help someone going through a difficult time, one must be able to step into the shoes of that person and truly relate to the problems.

POSCO has been striving hard to resolve social issues for a long time. Currently, the company has taken up the slogan ‘With POSCO,’ which exhibits its empathy and sympathy towards society. Along with several other programs, POSCO is implementing a unique program to put this mission into practice — 1% Sharing.

POSCO’s 1% Sharing is aided by funds donated — 1% of the monthly pay — by employees and is used for the benefits of society. The donation is voluntary and automatically deducted from the salary. 98.5% of POSCO employees are taking part willingly, with pride that they are contributing to making a difference in society. 1% is a small amount, but when it adds up, it becomes huge. In 2019, the annual donation collected reached approximately 9 billion KRW.

Giving Activities: Started by General Managers & Executives and Continued by the Labor-Management Committee

In 2011, POSCO’s 1% Sharing commenced with general managers and executives donating 1% of their salaries. Two years later, as of February 2013, the Labor-Management Committee (LMC) took over and actively launched the 1% Love Campaign. As more and more employees sympathized with the purpose, they began to participate which led to an expansion in the scale of the fund. In November 2013, POSCO established the ‘POSCO 1% Foundation’ as a measure to manage the fund in a more meaningful way. Adding on to support the 1% Sharing, the company went on to match employee donations with a one-to-one matching grant.

In its first year, the 1% Foundation raised 4 billion KRW in donations and since then, it has been focusing on activities to support the underprivileged groups of the community. As the end of 2019, the foundation has grown into a representative foundation with 98.5% POSCO employees participating and funds reaching 9.3 billion KRW.

The case of the 1% Foundation is the first and only example in Korea. There’s no other corporate that runs a social-giving foundation and supports it with matching donations of employees — reaching up to 98.5% of total employees. In fact, it seems like a rare case globally as well.

The 1% Foundation is growing even larger as 26 group companies and 88 partner companies joined in. At the end of last year, the number of donors reported a record-high 34,000.

Statistics show that Korea isn’t a forerunner when it comes to donations. According to the 2018 World Giving Index published by the CAF, Korea ranked 60 among 146 survey countries — the 21st among the 36 OECD countries. This ranking is considerably low compared to the level of Korea’s GDP.

In November 2019, Statistics Korea released a survey result that shows a decrease in the proportion of those who have donated in the past year or are willing to donate in the future. The percentage of respondents who have donated in the past year was 25.6% — down 10.8 percentage point from 2011 (36.4%). When asked for the reason of not donating, “Not enough financial resources” recorded 51.9%, lower than 2017 (57.3%). However, “Lack of trust in charity organizations” indicated an increase of 6 percentage point compared to 2017 (8.9% → 14.9%). This shows that the credibility and transparency of charity organizations do affect donations. 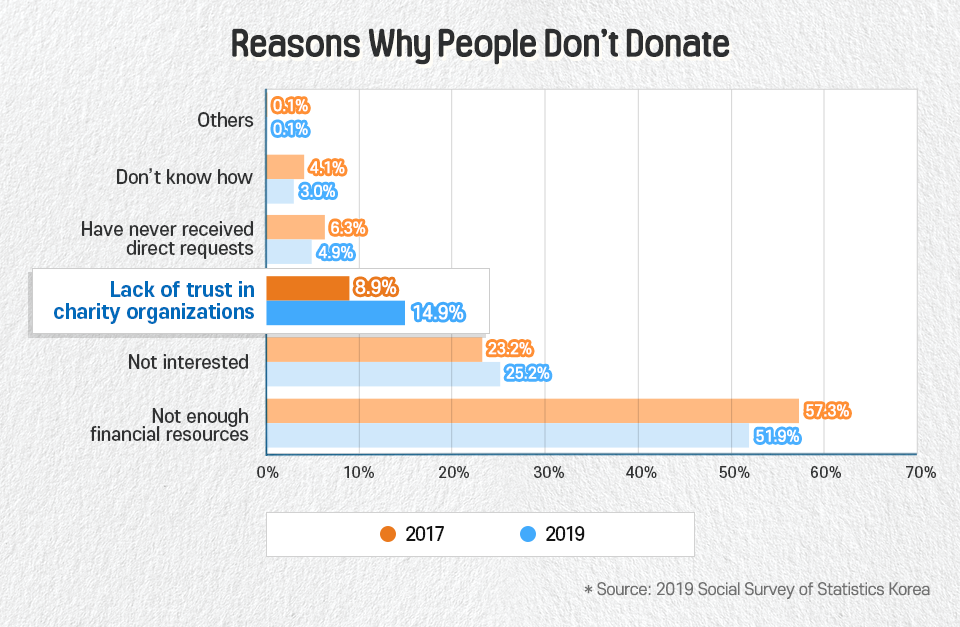 The main driving force of the POSCO 1% Foundation is the donors. The donors actively participate in the planning, executing, and evaluation of the entire giving programs. The Fund Management Committee, consisting of donor and staff representatives, evaluates each program implemented by the Foundation. The execution of actual programs is carried on by the Foundation Bureau, which is composed of 150 employee donors of Pohang, Gwangyang, and Seoul. The Foundation Bureau is in charge of the following: selecting beneficiaries, monitoring each project, and reporting on the 1% Sharing to employee donors.

The project areas of POSCO 1% Foundation are determined according to the results of employee surveys. Since most employees have donated in the hope of supporting those in difficult situations, all projects of the POSCO 1% Foundation aim to educate the underprivileged and help build their self-sufficiency.

Many donors also participate in the operating process of the projects. POSCO 1% Foundation has succeeded in narrowing the gap with donors by promoting projects that encourage the self-directed contribution of employees. ‘Change My Town’ — a project that was proposed and directly executed by donors — is a good example with completed tasks reaching up to 49 as of last year. The following are some of the main programs of the project: 1) Ideas to eliminate blind spots in neighborhoods, 2) Funding a special summer vacation for those unable to afford a vacation, 3) Providing books, and 4) Relief activities at typhoon struck areas.

The projects are mainly focused on resolving issues of the communities directly related to the donors. The reason for this is based on POSCO’s idea: Help and support must start from its local community, expand into other regions, and at last further advance into other countries as well.

While supplying funds to beneficiaries, POSCO employee donors provide mentoring and encouragement throughout the program as well. The beneficiaries of the foundation say that they truly appreciate the warmth of the 35,000 employees — more than the donated fund itself. The key point of the 1% Foundation could be considered this: the sincerity of the participating employee donors.

The Story of the POSCO 1% Sharing Beneficiaries

“Knowing that I was supported by so many POSCO employees was quite overwhelming. They even came to my games and cheered for me. I could win the gold medal and also break the Korean record, all thanks to them. The special wheelchair, which POSCO supported, enabled me to keep balance and play in a stable condition.”
– Mr. OOO from Pohang, who participated in the field games of the National Paralympic Games held in Seoul, 2019.

“I grew up at a shelter. When I turned 18, I had to leave the facility. I had 5 million KRW, which I soon ran out of because I got scammed. I began living at the school dormitory and took up a part-time job to pay for my living. The real problem occurred after I graduated from school. I dreamed of becoming a social worker, but I couldn’t make a living out of it, so I ended up getting a job at a small event company. However, shortly afterward, the company had to close down. I was at a loss and couldn’t figure out what to do. That was when I met POSCO 1% Foundation. The foundation supported my tuition and living expenses so that I could become a social worker. Also, the Financial Volunteer Group consisting of POSCO Finance Office employees, gave me financial advice, including ways to get a safe loan and manage my bank account as well. Thanks to these supports, I was able to study and become a social worker. I’m really grateful to the POSCO employees who reached out to me when I most needed help. POSCO 1% Foundation truly changed my life.”

Transparent Management — Not Even a Penny into ‘Company PR’

One of the distinguishable features of POSCO 1% Foundation is its transparent management. Each quarter, a report of each project — including every detail of how the fund was used — is published through EP(Enterprise Portal). The foundation operates its website and runs a separate online system integrated with EP where POSCO employees can participate in donations or apply other changes in real-time. The transparent management cultivated credibility in the foundation and was followed by special donations, that include employees’ prize bonuses and other external profits. In 2019, the number of special donations totaled 512 cases.

POSCO CEO Jeong-Woo, Choi, also contributed to the 98.5% of employee participation. He clearly stated that although POSCO 1% Foundation is operated with donations from POSCO employees, it is to be run as a separate non-profit foundation. Choi made sure that none of the funds at POSCO 1% Foundation was used for corporate PR activities. 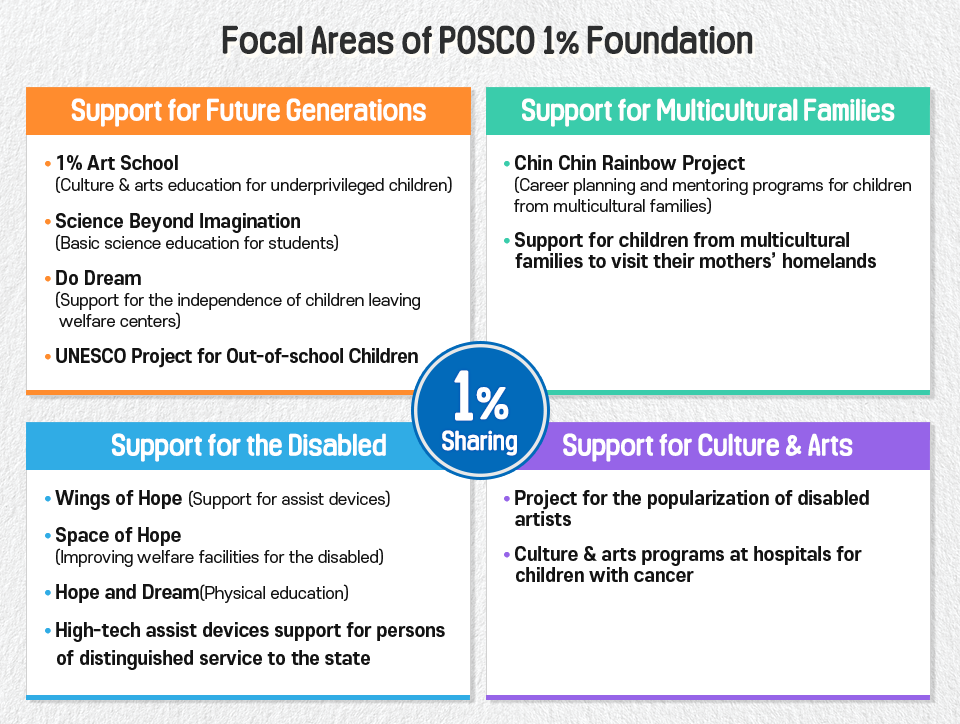 The participants of the 1% Sharing testify how happy they are to be a part. Though 1% might be a small amount, the expectations are very high as it may shine a light in the shadows of many. It is said that dewdrops gathered together can form a great ocean. POSCO Newsroom believes that the 1% Sharing of POSCO will continue to flow into the lives of people in need.