In South Korea, there are different kinds of fish that people eat for every season. The reason that makes this possible is the geographical feature of the country. South Korea is a peninsula, meaning that the country is surrounded by the sea on three sides. Fish is caught all year round, with annual consumption of marine products reaching 58.4 kilograms per person as of 2017 — the highest in the world.

However, in contrast to this record, the amount of local fish catches have been decreasing. According to Statistics Korea, the annual production of marine products recorded 914,000 tons in 2019, down about 100,000 tons from 1,013,000 tons in 2018. The reason behind the disappearance of the formerly abundant fishery resources is the ‘Whitening’ phenomenon.

The whitening phenomenon, also known as sea desertification, is observed as marine algae living in the coastal rock beds disappear and are replaced with coralline algae. It is caused by multiple factors, including the following: rising sea temperature due to climate change, lack of nutrients (nitrogen, phosphorus, and silicon) in the seawater, and a decrease of iron components in the sea.

According to a study from FIRA (Korea Fisheries Resources Agency) in 2017, 61.7% of the costal rock bed in the East Sea was suffering from sea desertification. Every year, an astounding 12,970 hectares of rock beds are turning into sea deserts.

The sea forest provides a basic food source for marine life and also a breeding ground for fish and shellfish. It acts as the foundation of the marine ecosystem by devising rich fishery resources and forming hideouts from predators. When these sea forests begin to disappear, shellfish, such as abalone, conch, and clam, cannot grow here. This result, in turn, is bound to pose a threat to the marine food chain.

From its very beginning, POSCO has placed importance on its social responsibility for the environment and has been pursuing various environmental activities accordingly. Since 2000, the company has been evaluating projects that can be of practical assistance to the marine ecosystem as well as local communities. The projects weren’t just about financial support. POSCO utilized what it does best — steelmaking. The ‘Sea Forest Cultivation’ project is one of them.

Triton: the artificial reef brand made with POSCO’s steel slag

The main purpose of the ‘Sea Forest Cultivation’ project is to restore areas damaged by the whitening phenomenon. With the help of POSCO-developed Triton reefs, these areas are transformed into sea forests with abundant marine algae. 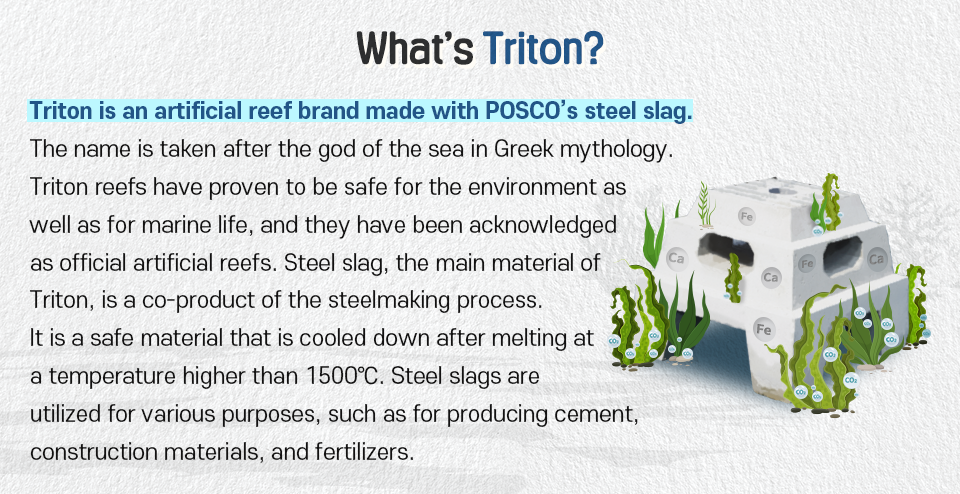 Steel slag, a co-product of the steelmaking process, has high mineral content such as calcium and iron, that are useful for marine ecosystems than general aggregates. It also has a lower risk of being damaged from typhoons and tsunamis due to its high gravity and strength. There are three types of Triton reefs: A-type, T-type, and Steel-combined Triton. These Triton reefs have been approved by the Ministry of Oceans and Fisheries in 2014 and have been used for national sea forest cultivation projects since then.

POSCO’s artificial reef project dates back to 2000. RIST, a research institute of industrial science and technology affiliated with POSCO, and the National Institute of Fisheries Science came together and installed 179 Triton reefs in Jeollanamdo Province. In 2010, POSCO signed an MOU with the Ministry of Oceans and Fisheries to create sea forests and fishery resources. Since then, 6,559 Triton reefs were installed in total as of 2019. 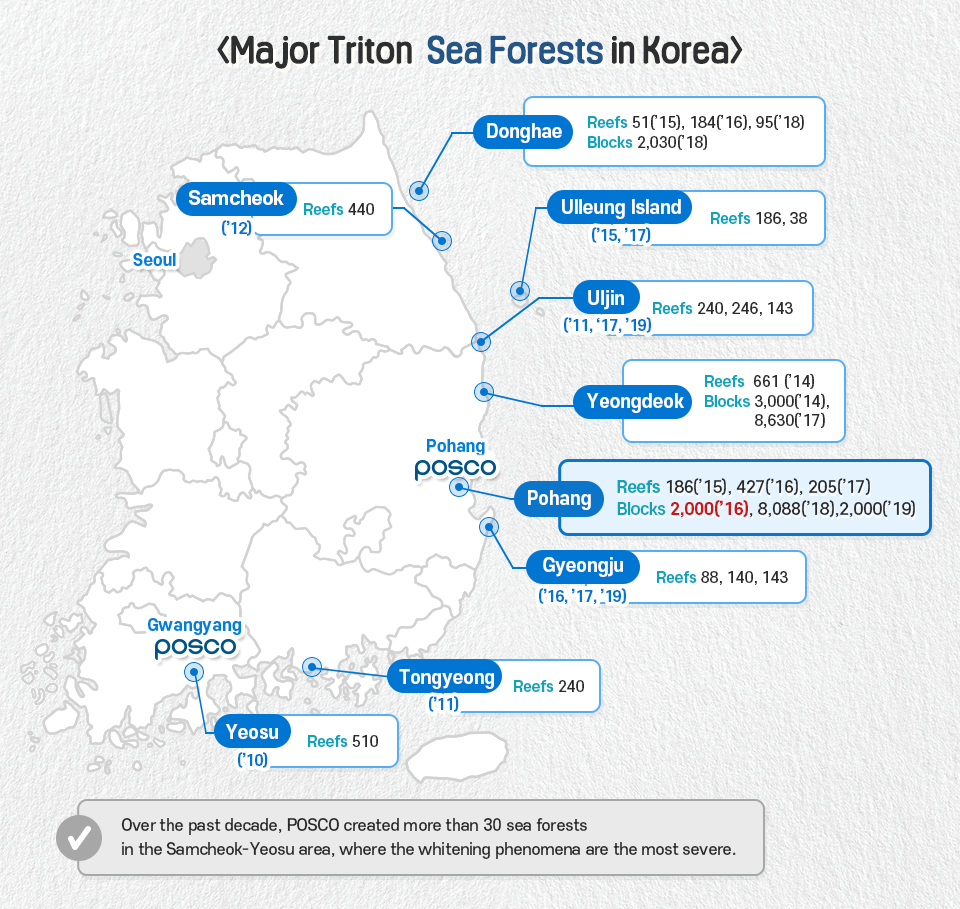 On May 28, POSCO set off to create another sea forest to mark the National Ocean Day (May 31). The new sea forest, created with Triton reefs and Triton sea fertilizers, was installed in Ulleung Island, where the whitening phenomenon was at its peak. For the project, POSCO gathered opinions from the local community and decided to create the sea forest in the 17~20-meter-deep area off the coast of Namyangri. Starting from May 13, 100 A-type Triton reefs and 750 Triton blocks were installed for two days, and on May 28, a ceremony was held to celebrate the creation of a new sea forest amidst the presence of local government officials. 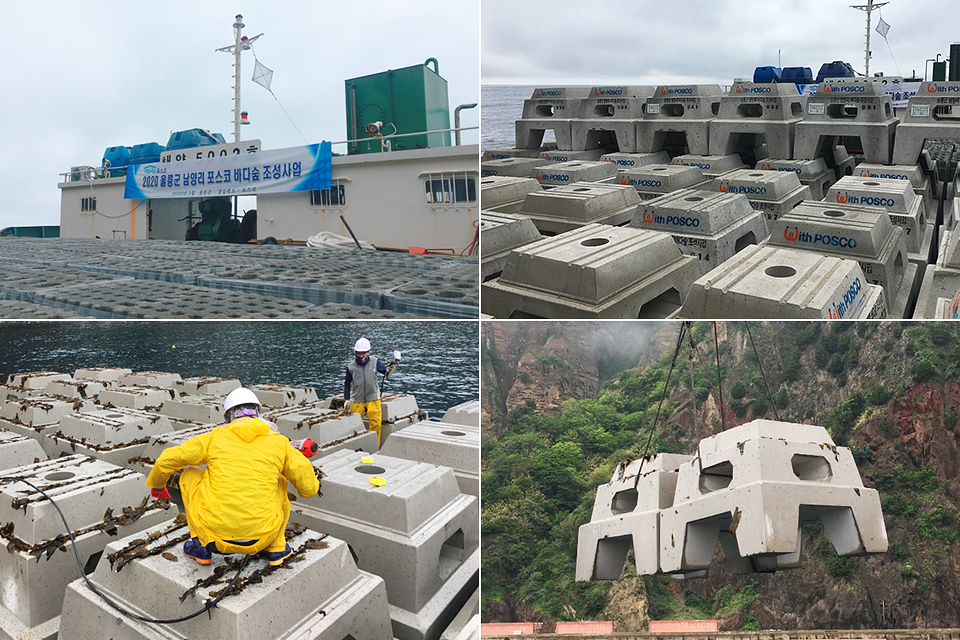 The sea forest cultivation project is the first Corporate Citizen project of local cooperation to restore the marine ecosystem. The project is expected to expand the food resource for high value-added fish species and also help improve the income of local fishermen. POSCO and Ulleung Island will continue follow-up management — including research of water quality, supplemental planting of marine algae, and exterminating harmful organisms.

Triton sea forest is capable of storing carbon dioxide due to the carbonation of steel slag — its main material — and the photosynthesis of marine algae through which the sea forest can store 10 to 20 tons of carbon dioxide annually per hectare. The carbon dioxide stored in the coastal and marine ecosystem is called “Blue Carbon”. 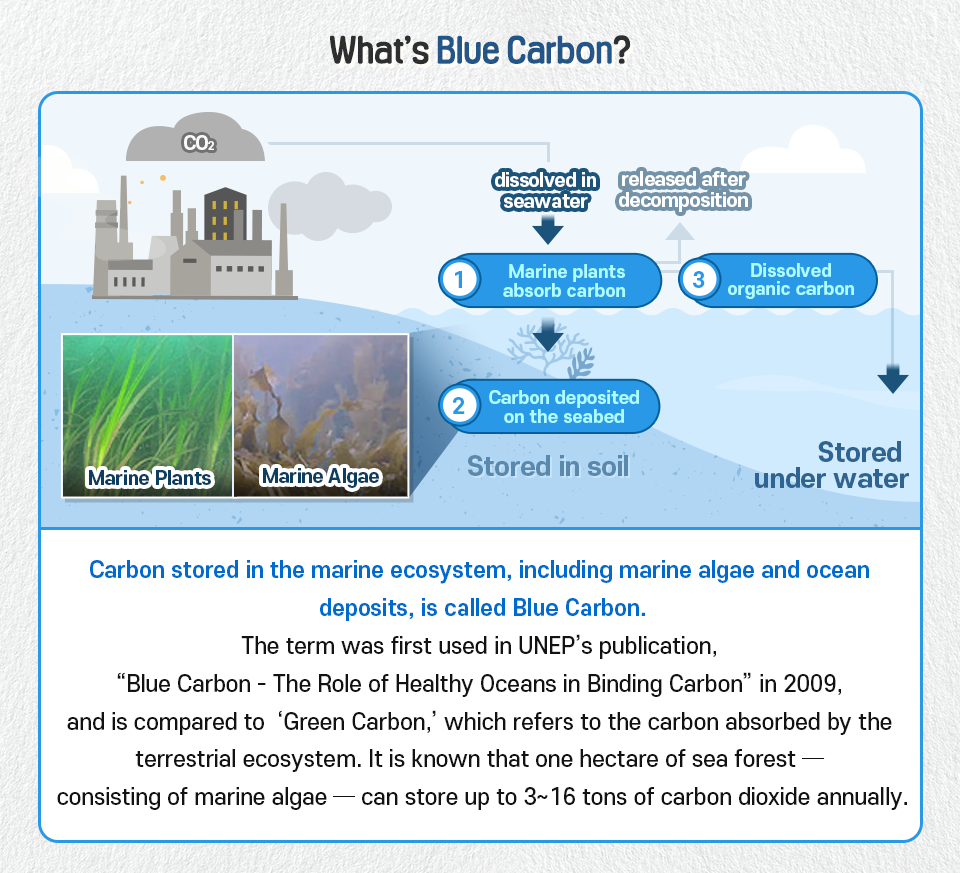 The marine ecosystem has up to 50 times more carbon absorption capacity than the terrestrial ecosystem. The reason why the Triton sea forest is considered as an effective means of blue carbon to prevent global warming lies here. However, since the marine ecosystem is less accessible and more difficult to understand than the terrestrial ecosystem, related studies have been insufficient. POSCO is to conduct scientific investigations on the effect of storing greenhouse gases in Triton sea forests.

Since January 2019, POSCO has been conducting joint research on blue carbon with POSTECH in Odo-ri, Pohang, where POSCO has created a sea forest with Triton reefs. Together, they measure the amount of carbon dioxide dissolved in seawater and analyze the dissolved organic carbon present in marine algae, sediments, and seawater. 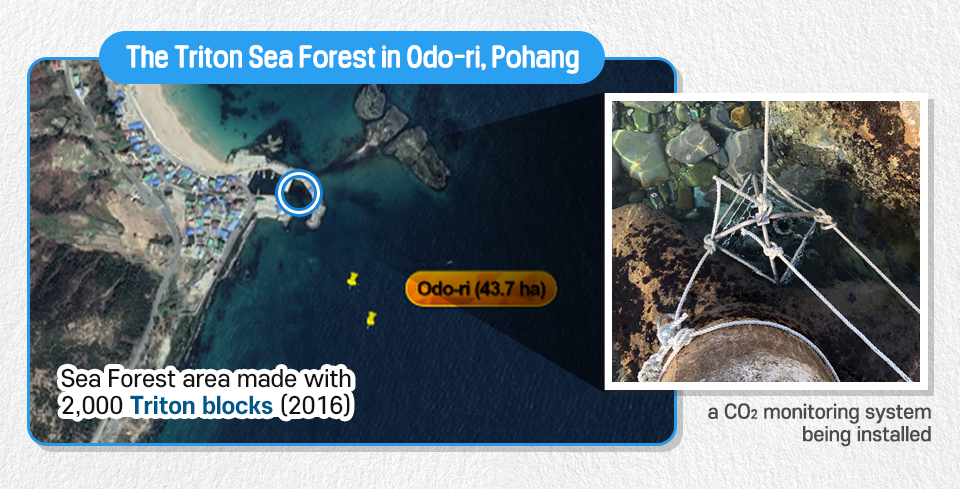 ▲ A CO₂ monitoring system being installed in the Triton sea forest of Odo-ri, Pohang, in 2016.

Triton reef is the perfect place to observe the blue carbon effect of sea forests because of its durability and ability to nurture a sea forest. The research conducted here is expected to lay the foundation for further studies regarding the effect of storing greenhouse gases in sea forests. POSCO will not stop here, but move on to seek ways to help the steel industry adapt to climate change in the marine sector. As a measure, the company will cooperate with Nippon Steel (Japanese steelmaker) on the blue carbon subject.

‘Building a Better Future Together’ is what POSCO wishes to achieve through the sea forest cultivation project. POSCO will continue on its journey to becoming a global sustainable company, advancing past its title of leading global steelmaker.