Here is a couple of the same age who have been married for eight years. On being asked why this couple, who live in Seoul and work in stable large companies, didn’t have any children, they replied that it wasn’t that they didn’t want children — they just couldn’t. The couple managed to buy a house in Seoul (Houses in Seoul are quite expensive) with a loan on getting married, and when they decided to have a child about three years ago, the first problem they faced was “infertility.”

“But even if we do have a child, there’s no one to look after the baby.”

The second problem they will face after giving birth would be “career breaks.” The couple grew up in the provinces and got a job after graduating from college in Seoul. They have no parents or relatives who can take care of their children in Seoul. They leave home for work at 7 a.m. and arrive back home at 7 p.m. Both spend 12 hours out of 24 hours a day outside their house, so if these two have a child, at least one of them must take parental leave.

However, the couple has seen colleagues being assigned to another department or district and pushed out of promotion after parental leave — giving them another reason to hesitate on having children.

“Will I be able to come back to my workplace after parental leave?”

ISSUE ‘Childbirth’ & ‘parenting’ have become an obstacle for the 2040 age group.

The birth rate in Korea is falling rapidly. According to Statistics Korea, the total fertility rate, which is the average number of children a woman is expected to have during her lifetime, fell below one for the first time last year, marking the lowest in the world. There is also a prospect that the number of births and deaths will be reversed for the first time this year, with a further drop to 0.8.

It is a known fact that when the working age population decreases and population ageing increases, the burden of younger generations will inevitably expand and result in sluggish economic growth due to reduced consumption. However, for the 2040 age group, childbirth has long been a matter of choice, not a must. As seen in the case of the couple earlier, childbirth is a challenge, even for economically stable families. This is because childbirth and parenting are considered as obstacles in contemporary living conditions, where both having and raising children are difficult tasks. The obstacles not only make it difficult to sustain the current life but rather deteriorate the quality of life, regardless of class and age.

On recognizing this matter, the government’s childbirth control policy is also gradually shifting its paradigm. 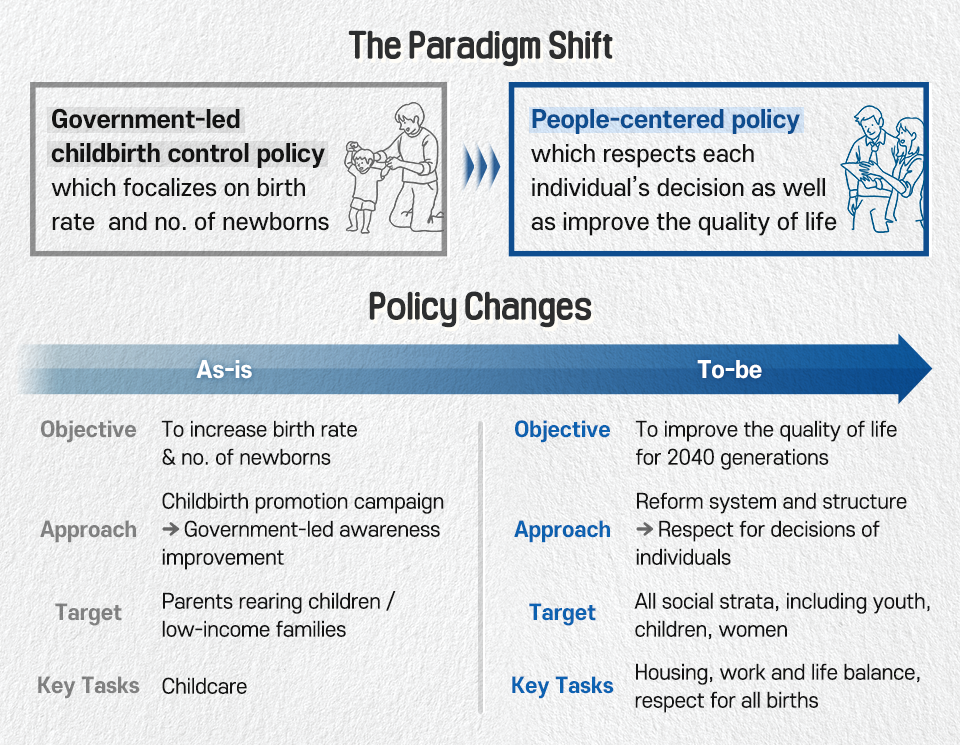 In the past, the government-led childbirth control policy targeting low-income families was focalized on simply increasing birthrate and the number of newborns. However, the goal has now been changed to improve the quality of life for 2040 generations.

A society where working parents can give birth to and raise children at ease. Could it be feasible?

Last year, POSCO presented a POSCO-type role model as one of the six major Corporate Citizenship projects and is currently implementing various policies to promote childbirth according to the life cycle of individuals. In particular, POSCO applied the “working-from-home for child care” system for the first time in Korea to prevent career breaks of working parents and also improve the quality of life of employees by balancing work and life.

The system has been under implementation since July 1. A POSCO employee, who applied for this working-from-home system starting on July 13, said, “It took three hours to commute from my mother’s, who takes care of my 14-month-old child. I was beginning to understand why people quit their jobs, and just then, POSCO introduced the working-from-home system, and I applied for it.” She added, “Now that I can concentrate on my child with the time saved from commuting, I think I can play a better role than before.”

POSCO plans to expand the ‘Working-from-home for parenting without career breaks’ to its group companies.

Since 2017, POSCO has already been operating a POSCO-type childbirth policy, that covers all phases of the life cycle from marriage, pregnancy, childbirth, and parenting.

In particular, POSCO allows a maximum of 10 days leave for infertility treatment, which is the primary factor of low birthrate and provides up to 1 million KRW (per session) as support for expenses that are offered a maximum of 10 times.

POSCO employees will also receive maternity benefits: 2 million for the firstborn and 5 million KRW for the second. Once the employees’ maternity leave ends, they automatically go into paternity leave, which can be used up to three years, without a separate application procedure. Also, employees can freely adjust working types and hours according to the parenting environment of each individual, utilizing various systems, such as the system of working reduced hours during the child-rearing period and the system of flexible working hours.

POSCO Dongchon Childcare Center is located right next to POSCO’s headquarters in Pohang. It is equipped with an indoor garden that features a nature-friendly interior space filled with exotic plants, such as lemon and banana trees. On the other hand, POSCO Geumdang Childcare Center in Gwangyang is designed to allow children to play freely in various outdoor playgrounds. Located in the housing complex, it is within walking distances from nearby facilities like marts, movie theaters, libraries, and parks.

The POSCO Seoul Childcare Center, located in POSCO Center, Seoul, can accommodate up to 200 children. In addition to this, POSCO recently renovated its second childcare center in Seoul and opened it so that not only POSCO but also children of partners and residents can be enrolled.

Since 2011, POSCO has been certified as an excellent family-friendly company every year by the Ministry of Gender Equality and Family, and last year, 17 POSCO Group companies received certification. POSCO’s efforts to become a ‘childbirth-friendly company’ with innovative childbirth support activities continue this year as well. The company shared various case studies on the issue of the declining birthrate and provided a forum for spreading social discussions. At the ‘2020 Low Birthrate Symposium’ held at POSCO Center on July 14, POSCO shared the various efforts that it had implemented so far to present a role model and resolve the low birthrate issue. The company also discussed the role of corporates in creating quality jobs that can support the parenting of employees amid the Demographic Cliff crisis.