ISSUE The localization rate of materials, parts, and equipment in South Korea are in the mid-60%.

Last year, export regulations on semiconductor materials were an issue in South Korea. Voices were raised on the importance of localizing related technologies. Since the materials, parts, and equipment needed for manufacturing weren’t localized enough, the sudden regulations imposed a challenge. Luckily, however, the event did not escalate into a crisis and did not cause as much damage as expected because Korean companies quickly jumped into handling the situation. The large companies of the manufacturing industry had the technology, and SMEs — aka Hidden Champions — supported them. The key was the cooperation between large companies and SMEs.

However, it is known that SMEs in Korea are generally not competitive in technology. According to the 2018 Survey on Korea Federation of SMEs, the technology of Korean SMEs is 1.9 years behind the U.S., 1.8 years behind Japan, and 1.6 years behind Germany, but estimated to be 2.7 years ahead of China. The technology gap with major countries affects the survival of SMEs themselves. However, it is also a threat that can adversely affect the entire industrial ecosystem of Korea, including large companies, in a chain reaction.

As mentioned in [Corporate Citizen POSCO’s SOLUTION Part 2] “Sharing Competitiveness, Sharing Growth,” polarization between large companies and SMEs is deepening, and cooperation is required for the industrial ecosystem.

SMEs need support from large companies, and large companies need the expertise of SMEs. Building an industrial ecosystem where all parties can coexist would be a way to cope with the rapidly changing business environment.

The Korean government is operating a “Benefit Sharing” system as a support program to create an industrial ecosystem where large companies and SMEs coexist. Actually, POSCO had first introduced the “Benefit Sharing” system in Korea in 2004. The system is one of POSCO’s seven major shared growth programs, which is about carrying out improvement tasks together with SMEs and sharing the achieved benefit. This in-house system was acknowledged as a successful business model and has spread to the entire industry.

Through the Benefit Sharing system, SMEs get the opportunity to stabilize supply and increase sales while focusing on technology development. On the other hand, large companies can attain competitiveness, such as improving product quality, through the expertise of SMEs. This has proved to be of advantage to both large companies and SMEs since their coexistence fosters each other’s competitiveness as well. Especially this year, POSCO has branded its shared growth program named “Change Up Together,” and is expanding support for its overall shared growth programs, including the benefit sharing system. 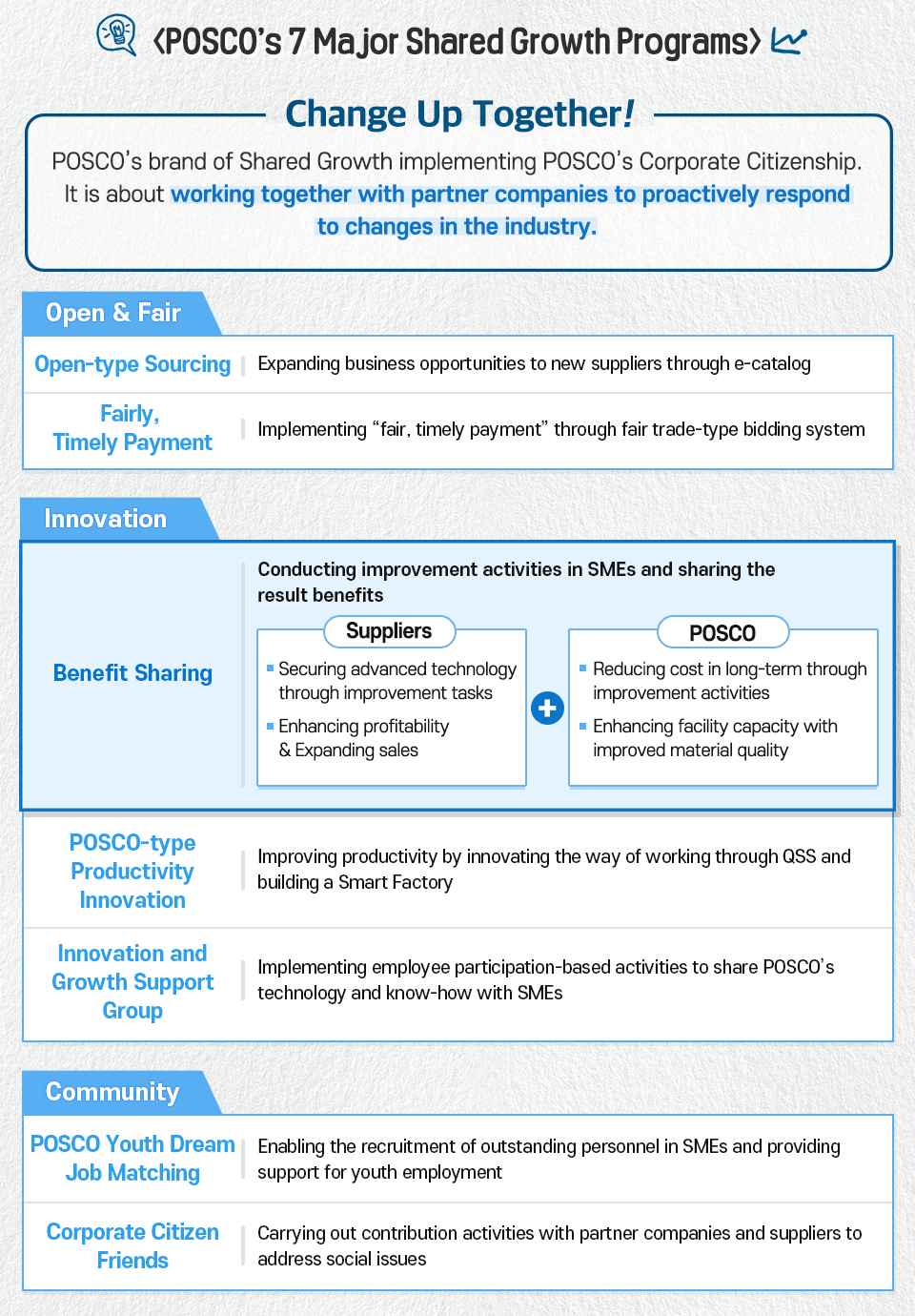 Task Performance Process Any POSCO employee or employee of suppliers is free to propose improvement tasks. The following five stages are carried out in order: Task selection, task performance, task evaluation, performance benefit, and monitoring. The entire process is operated transparently through a specialized system. (See the process of the Benefit Sharing system)

In the early stages of the operation, the concerning department differed from one task to another, making it inefficient to carry out the tasks. However, as of present, a unified department in charge of operation has enabled a one-stop service — from task selection to benefit sharing — eliminating the inconvenience of the past. Also, POSCO is implementing a non-financial model that carries out tasks that are difficult to quantify, such as tasks concerning safety and the environment.

As of last year, POSCO recorded a high localization rate of about 90%, which can be said to be the result of its long-term benefit sharing activities. It is a result achieved by integrating the technology of SMEs into specialized fields that were difficult for POSCO to improve on its own.

Task Evaluation & Benefit Recently, POSCO has upgraded the benefit sharing system by strengthening the benefit for successful tasks. It provides various incentives, such as rewarding 50% of the financial performance in cash or signing a long-term supply right for the solution. It has also sought to reduce the burden of SMEs with a new measure that compensates at least 50% of the task cost even if the task turns out to be inadequate. 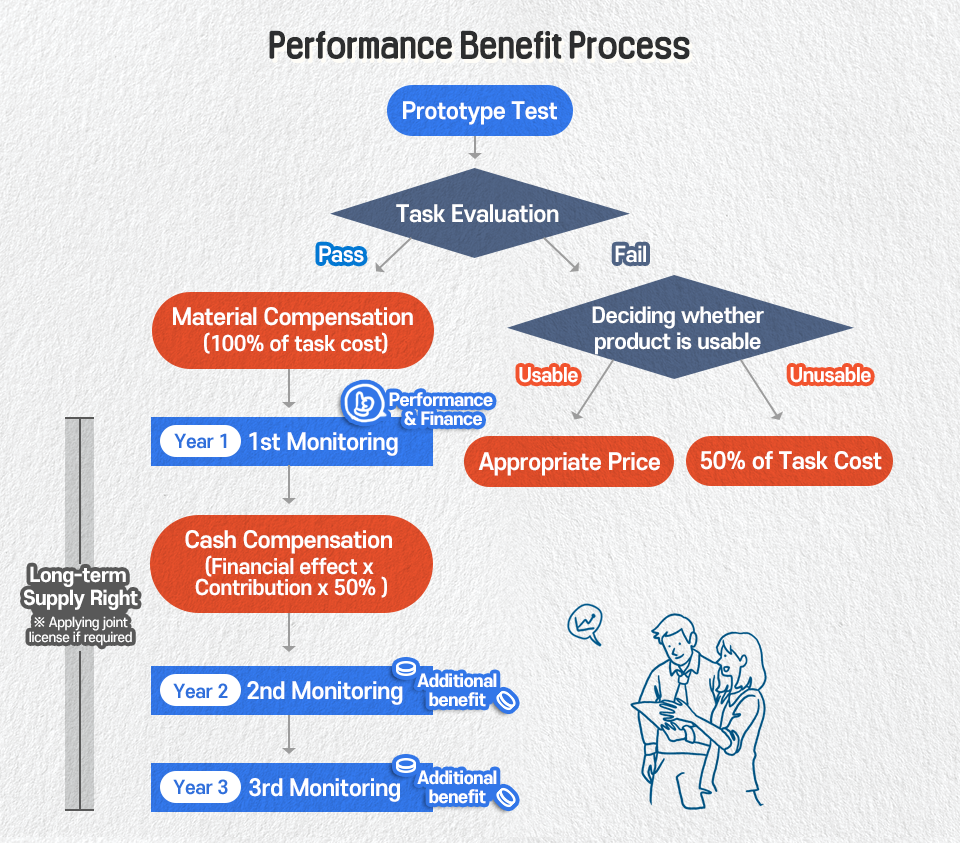 In 2019, POSCO carried out a total of 174 tasks and rewarded 42.9 billion KRW for completed tasks. Since introducing the benefit sharing system in 2004, the company has operated 4,916 accumulated number of tasks, and accumulated shared benefits reach 552.8 billion KRW. 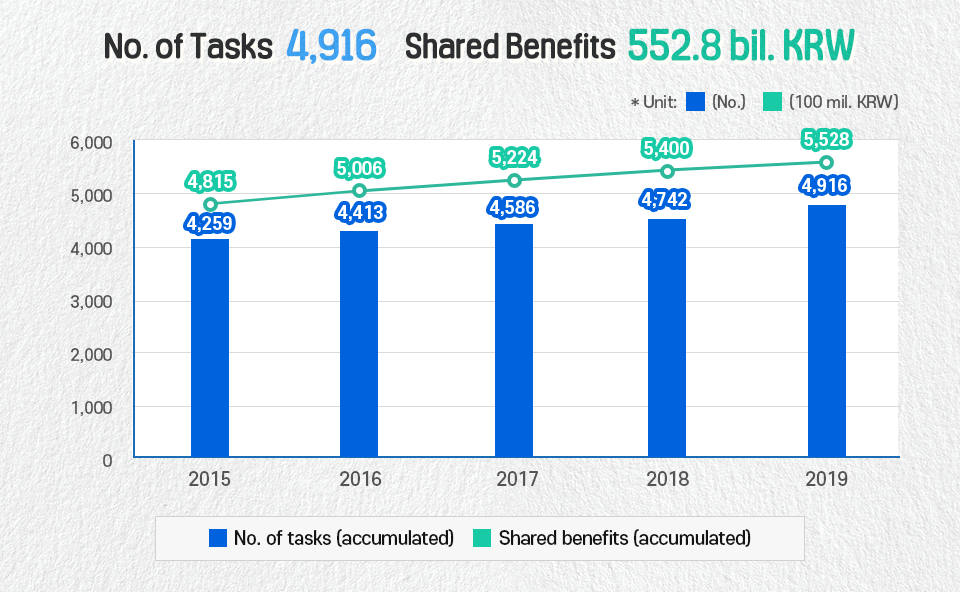 Amidst the harsh times triggered by the COVID-19 pandemic, POSCO is striving to grow together with its customers, suppliers, and partner companies. The company will expand substantial performance benefits, extend the participation of companies that have no direct business with POSCO, and support channels for growth through joint development and technology sales. As a measure to expand and sustain its achievements, POSCO plans to maximize the shared growth value by applying technologies in similar processes as well.

Product defects occurred due to the Manganese Oxide powder generated while manufacturing electrical steel. As a result of developing a powder cleaning system through the benefit sharing system, the amount of powder was reduced by more than 50%. This resulted in the reduction of about 200 million KRW worth of defective products, and workers didn’t need to put on dust-proof clothing anymore. YUJIN MECHATRONICS secured the right to supply the system for three years, and POSCO plans to expand its use to other plants in the company starting this year.
※ YUJIN MECHATRONICS: A supplier producing industrial automation robot system and equipment

Since the discharge of molten iron at the blast furnace tap hole is irregular, it is hard to monitor the exact temperature of the molten iron. The real-time monitoring system, which was proposed by Hana Tech, enabled workers to predict the condition of furnaces while monitoring the temperature of molten iron in real-time. The temperature was measured without any direct contact and processed into live-data with an optimal algorithm that predicted the condition inside the furnaces, saving about 400 million KRW per year in fuel costs. The system also helped secure the safety of workers. As a benefit, Hana Tech received material compensation and a three-year-term supply right.
※ Hana Tech: A supplier producing precision metal parts

KWANGWOO Co., Ltd. is a supplier of rolling oil, which is essential for manufacturing. The company collaborated with Gwangyang Cold Rolling plant No.4 and succeeded in localizing base oil components. The improved components allowed the cleaning of contamination caused during the rolling process, thus reducing both unit price and input volume. POSCO was able to achieve a financial effect of more than 300 million KRW, half of which was shared with the supplier.
※ KWANGWOO Co., Ltd.: A supplier of lubricant and grease