ISSUE Manufacturing Industry: the backbone of Korean economy. But its SMEs are facing significant challenges.

The United Nations Industrial Development Organization (UNIDO) announces the countries’ ranking of manufacturing competitiveness every year. The Republic of Korea entered 17th in 1990 and made it to the Top 10 in 2003. In 2017, it ranked 4th. It took Korea just 28 years to jump from 17th to 4th — a truly remarkable leap forward. The products of the manufacturing industry make up 90 percent of total exports, and domestic jobs created by the industry add up to over 4.5 million. As of 2017, the GDP portion of the nation’s manufacturing industry stands at 30.4 percent — higher than that of China (29.3 percent). In this respect, it is evident that the manufacturing industry has played a significant role in the rapid growth of Korean economy.

However, Korea’s manufacturing industry is said to be facing huge challenges. The business in the manufacturing industry — including steel, shipbuilding, and automotive — have reached the maturity stage, and are struggling against fierce competition amid overcapacity in the global market. Besides, There has been an increasing number of issues regarding the ecosystem of the manufacturing industry in recent years, such as promoting balanced growth between large companies and SMEs. The industry is being flooded with new technologies of the Fourth Industrial Revolution — such as Big Data, the Internet of Things (IoT), and Artificial Intelligence. There are concerns that these technologies might widen the disparity between large companies and SMEs. Eventually, the gap in knowledge, information, and technology could lead to economic polarization.

According to OECD statistics, Korea is one of the countries with the largest productivity gap between large companies and SMEs. The labor productivity of SMEs relative to large companies recorded 53.8 percent in 1988 but fell to 32.5 percent in 2014. On the scale of R&D expenditures, the gap between the two gradually widened over time as well. These gaps led to a huge difference in business performance, which in turn resulted in the disparity of labor, resources, and R&D investment capacity. This kind of repeated cycle is fatal to the industrial ecosystem vulnerable to its instability. 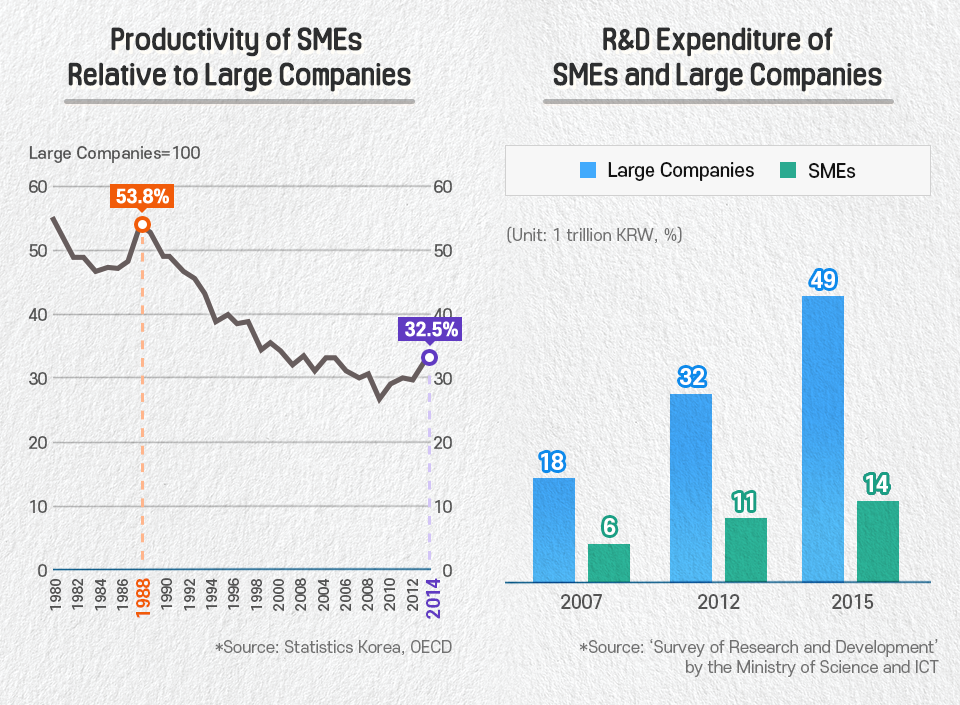 POSCO has an important role here. The World Economic Forum announced POSCO as a ‘Lighthouse Factory’ for pioneering the manufacturing industry by applying core technologies of the Fourth Industrial Revolution. There are 44 lighthouse factories around the world and POSCO is the first and only Korean company on the list.

So, POSCO came up with a solution: establishing and pursuing shared growth programs that enable SMEs to become smart together. Since POSCO has the competitiveness that transforms the huge steelworks into a lighthouse factory, the company is stepping forward, more than willingly, to share its competitiveness with SMEs in a bid to strengthen the industrial ecosystem.

At POSCO, the term ‘Shared Growth’ isn’t a new concept. The company started its first Shared Growth activities in the late 1990s. In 2005, POSCO established an organization dedicated to the purpose and currently operates a total of 33 Shared Growth programs. The “Benefit Sharing” system, which is run by the government and participated by 472 companies nationwide, is known to be first launched by POSCO in 2004.

Among the many Shared Growth programs, POSCO focalizes on the POSCO-type Productivity Innovation as an effort to bridge the gap between large companies and SMEs. 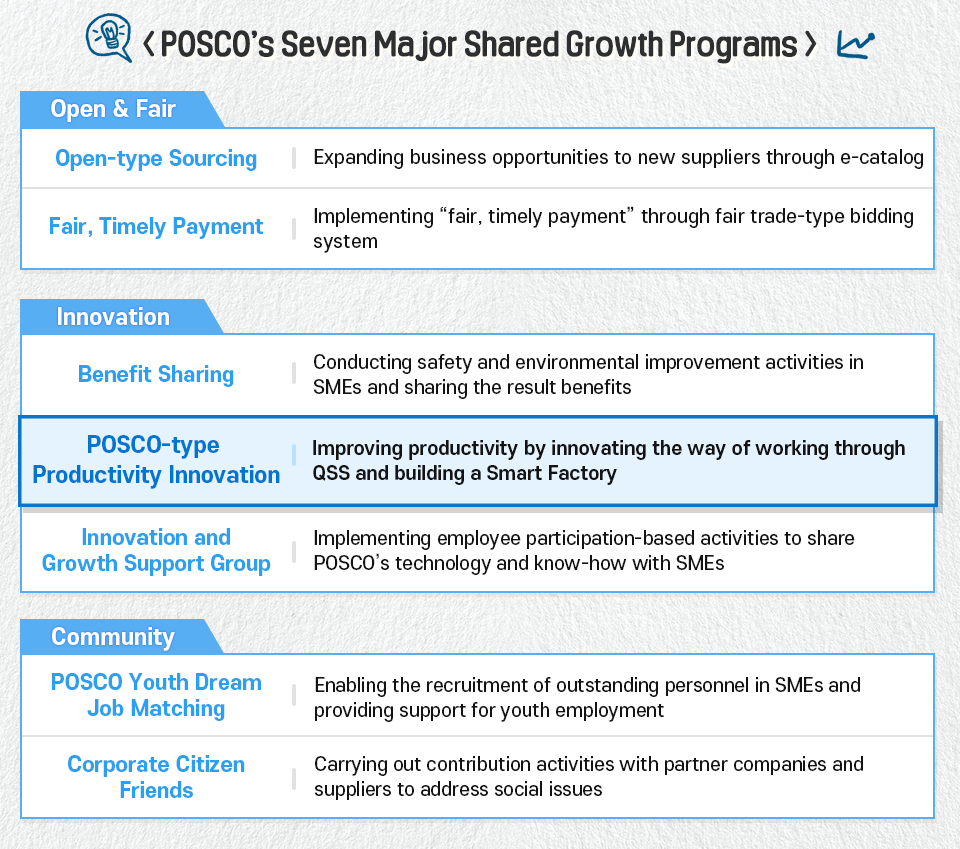 The ‘POSCO-type Productivity Innovation’ program is an activity to transfer QSS (Quick Six Sigma), a POSCO’s own manufacturing innovation technique, and smart factory technology successfully built by POSCO. To facilitate it, POSCO is to contribute 20 billion KRW over five years and the government adds 10 billion KRW to run the program. So far, POSCO-type Productivity Innovation activities look similar to those of other companies.

However, delving into the details of the program, you might find something interesting — the program consists of two steps. The first step is ‘smartization consulting to enhance competence,’ and the second is ‘support service to build a smart factory’. Those two approaches might seem quite similar at first glance, but there is a reason why POSCO operates the program in this way. POSCO strives hard to teach how to fish rather than just give the fish itself.

Let’s say that building a smart factory is like making smart fishing spots and fishing gears. Good tools and fisheries are important, but before that, the fishers also need training. In the manufacturing industry, the importance of the workforce is paramount, so a smart factory can be completed only when the workforce becomes smart as well. For companies that need this fundamental change in structure, step 1 (smartization consulting) is implemented instead of building the smart factory straight away. POSCO carries out step 2 (support service to build a smart factory) for those companies that have already gone through innovation and are expected to create synergy with the build of a smart factory. The competitiveness and productivity innovation that POSCO would like to share lies here: a people-centered smart factory. 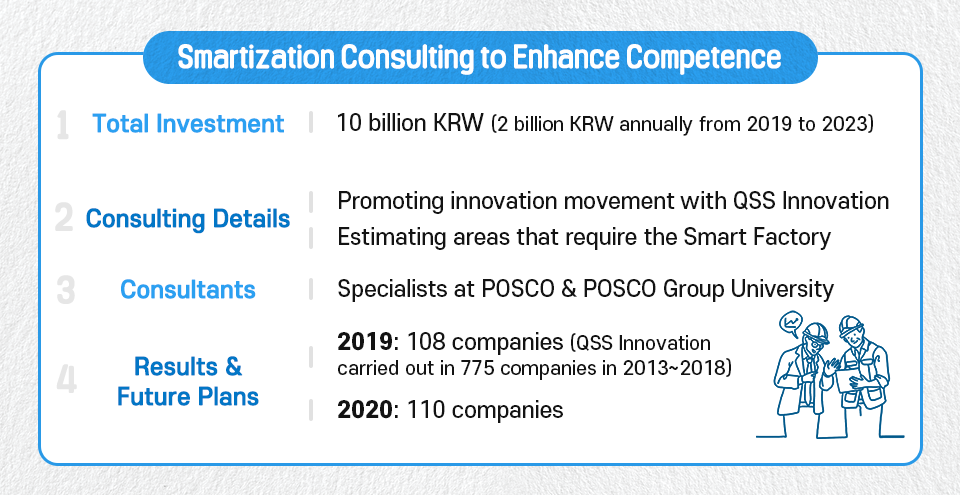 ‘Smartization consulting to enhance competence’ is an improved version of POSCO’s QSS Innovation activities that had been carried on from 2013 to 2018. QSS Innovation is an industrial movement to improve the productivity of the manufacturing workplace. ‘Smartization consulting’ also uses the QSS as a consulting tool, but this activity concentrates on changing the SMEs’ fundamental structure and lay the foundation for smartization prior to build a smart factory. Thus, the project not only enables innovation in productivity but also help detect areas that require a smart factory. As of 2019, POSCO had carried out consulting projects in 108 companies and plans to expand to 110 companies in 2020. 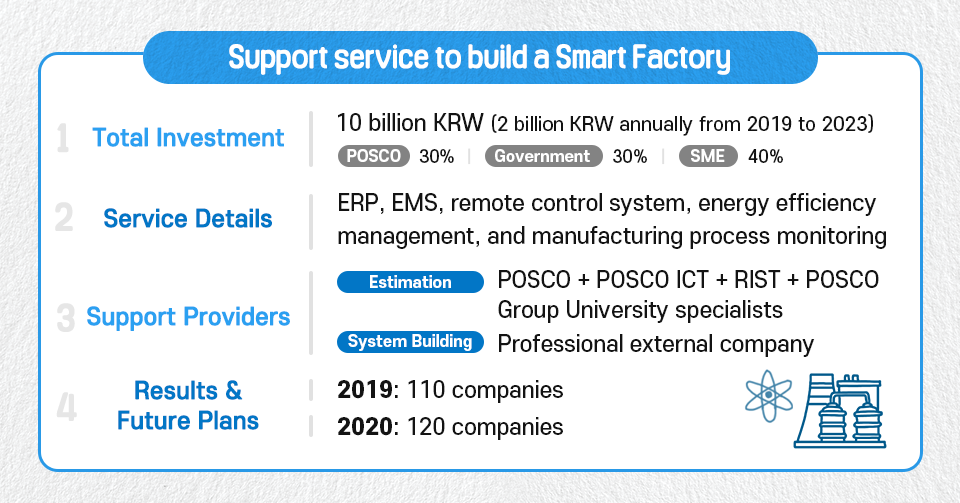 In the second step of the program, POSCO Group specialists help build a smart system that is suitable for the company. At this point, the surrounding environment and the scale of the company are taken into consideration. The provided services include monitoring facilities, MES, and ERP, etc. A customized system — according to the SMEs’ smartization level — is proposed and built, with POSCO and the government each bearing 30% of total expenses. If the project cost is less than 20 million KRW, the total amount is borne by the POSCO and the government — without the burden of SMEs.

In most ‘smart factory building support’ provided by large companies, the support ends with just installing the system. But POSCO’s support can be differentiated since it reshapes the mind-set of the workforce in step 1, and then builds the smart factory in step 2. It is an ideal program, not just for establishing smart facilities but also for nurturing an intelligent workforce as well. Though there are some cases where the first and second steps of the program are conducted independently, POSCO plans to maximize synergies by implementing both steps as an integrated program. POSCO provided supports for 110 companies last year, and 120 companies will be supported this year. Targets include POSCO suppliers, partner and client companies, POSCO Group suppliers, and also companies that have no business transactions with POSCO.

“Shouldn’t our company be of a certain scale to get consulting from POSCO?” The answer is no. For the smaller SMEs, POSCO plans to introduce “Mini QSS” initiating this year. POSCO is to carry out consulting for smaller companies as well so that these companies can easily start innovative activities that are essential for growth.

Seohan Antamin Co., Ltd., located in the southeastern industrial complex in Incheon, is a company that produces non-flammable internal and external construction materials. In 2016, the company launched the QSS Innovation activities (currently the smartization consulting) with POSCO. POSCO’s consultants visited the site every week and the consulting lasted for three years. In the year after the consulting started, the company’s performance graph showed a dramatic increase with defect indicators showing a steep decrease.

Such dramatic changes were possible just by innovating the way of working. As the activities turned out to be successful, Executives who were pessimistic about the QSS Innovation began to realize that field improvements and defect reduction activities eventually led to enhanced business performance. Employees broke their bad habits and initiated behavior changes on their own. The failure rate at the site fell dramatically. Last year, Seohan Antamin was presented with the Gold Tower of Order of Industrial Service Merit, once again proving the importance of the way of working.

Daesung MDI is a limestone production & supply company that operates silo facilities in Yeongwol district. Silo is a facility used for storing limestone and resemble tall towers. Workers had to go up and down such silos to check the inside and monitor the inventory. This inefficient way produced unproductive results. Since the inventory was monitored manually, the information was inaccurate. Also, production and sales departments couldn’t share inventory information in real-time, and this led to a major setback in sales.

In 2019, Daesung MDI built a smart factory in cooperation with POSCO. Workers no longer needed to climb the tall silos. Risks of safety accidents reduced greatly. The monitoring system installed in the silos provided accurate inventory information. This information is simultaneously shared through a mobile system without any restrictions. Now, marketers can operate sales activities with accurate information. 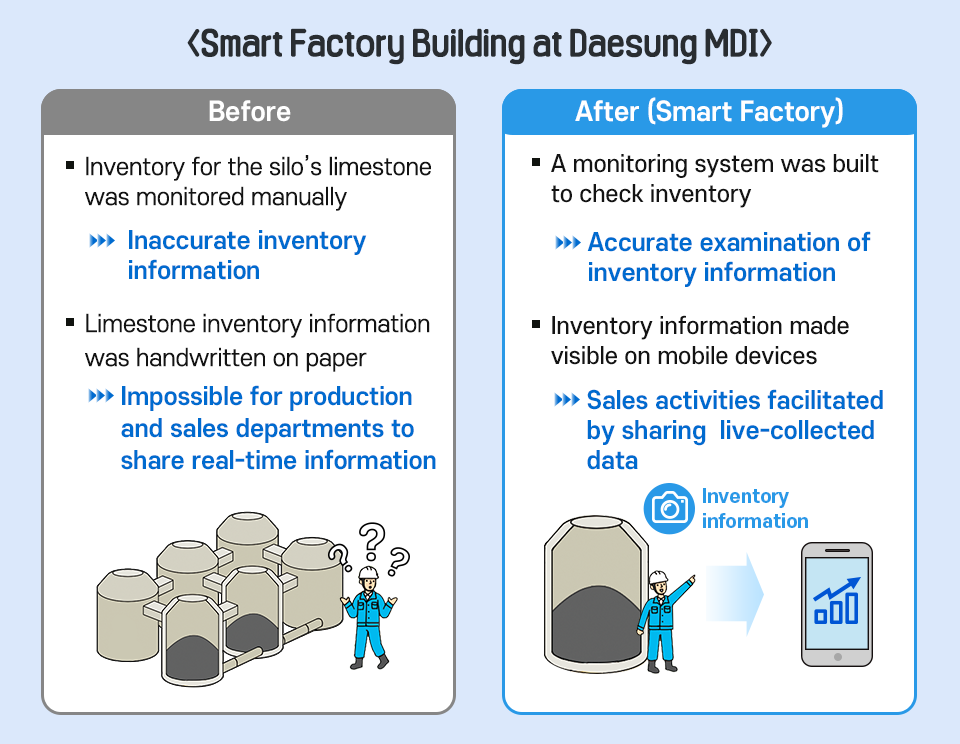