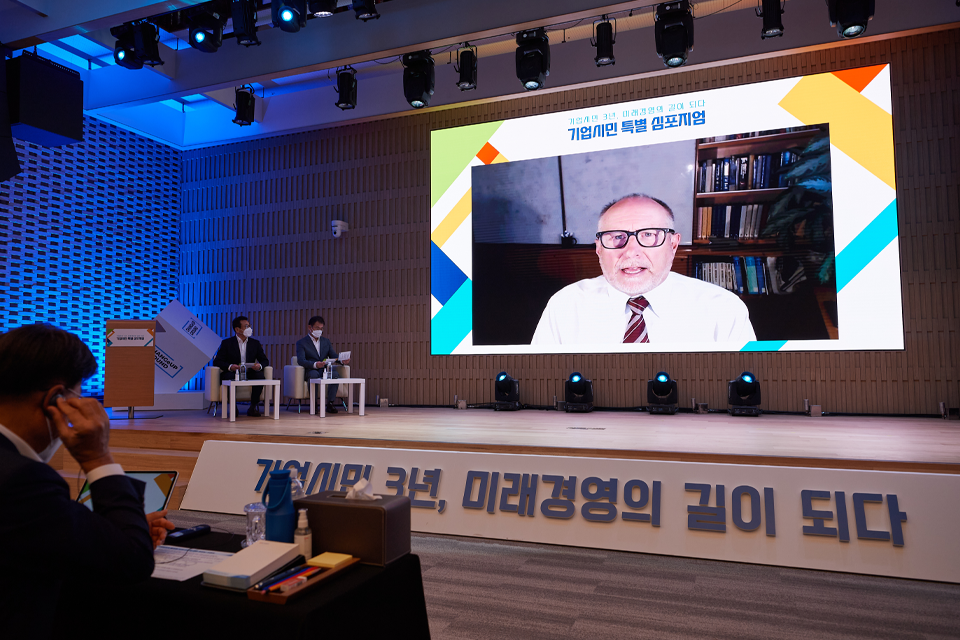 To commemorate the opening of the CHANGeUP GROUND Pohang, on July 23rd, Professor William P. Barnett and Professor Hyun-sang Shin gave lectures under the theme of the value and performance of POSCO’s management philosophy, Corporate Citizenship. POSCO Newsroom delivers the lectures in detail! 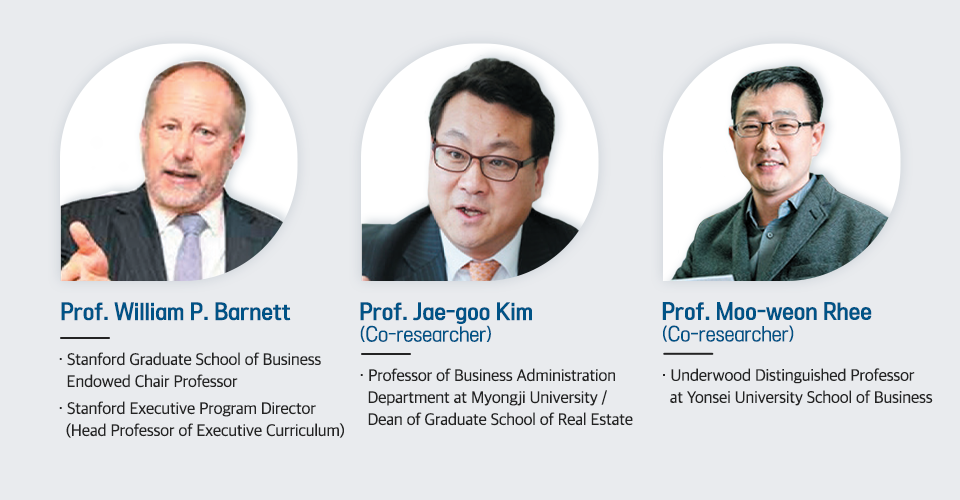 Professor William P. Barnett, together with Professor Jae-goo Kim of Myongji University and Professor Moo-weon Rhee of Yonsei University, conducted joint research on POSCO’s management philosophy, Corporate Citizenship. Professor William P. Barnett mentioned that POSCO, which took corporate citizenship as its management philosophy, can be viewed from an evolutionary perspective by comparing it to the Red Queen Hypothesis. In particular, POSCO is the first company he wants to study as it has preemptively declared corporate citizenship in response to the rapidly rising ESG trend. 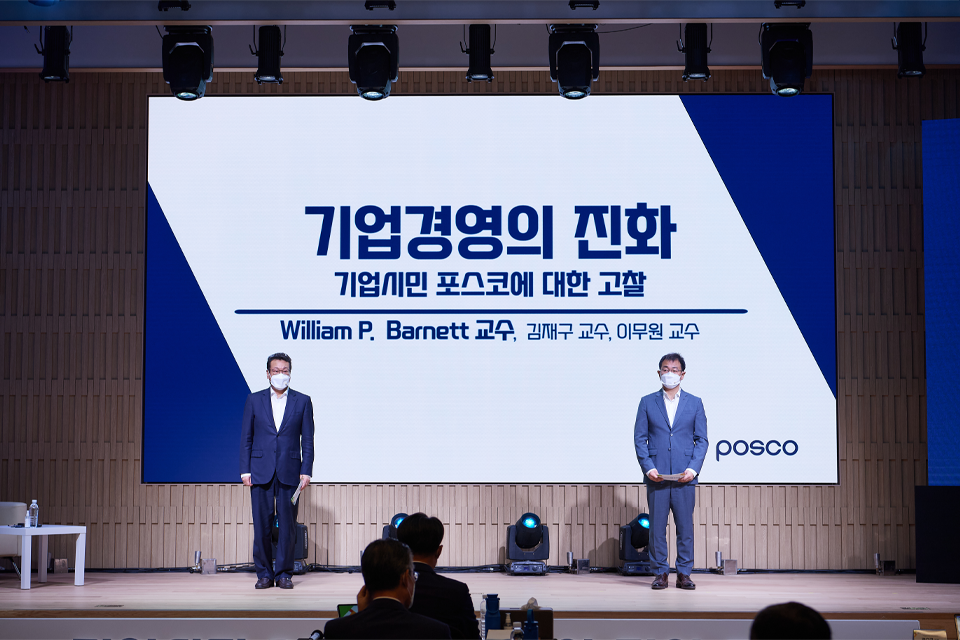 The Red Queen? An evolutionary perspective? If you are not sure about the relationship between these unfamiliar words and corporate citizenship, let’s look into the core content of Professor William P. Barnett’s virtual lecture with POSCO Newsroom!

According to Professor William P. Barnett, a company’s development of something new through innovation means that the company’s performance, quality of product, production innovation, and efficiency go up together. When a company becomes powerful in the market, the competitor also increases. Therefore, the company has to continuously innovate and improve its product quality and efficiency to not fall behind the competitors. In other words, competitive companies continue to innovate to stay ahead of their rivals, thereby creating a virtuous evolutionary circle in which innovation causes another innovation.

In an anecdote from Through the Looking-Glass and What Alice Found There, the sequel to Lewis Carroll’s children’s tale Alice’s Adventures in Wonderland, the Red Queen tells Alice that she must keep running to survive in the competition. The Red Queen Hypothesis, taken from this anecdote, explains that competition makes every company on the market stronger.

The most innovative companies have led the virtuous circle of change, and POSCO is at the forefront of the change, leading innovation in the manufacturing and steel industry. POSCO is evolving into a more innovative company by exchanging benefits with its partners as well as competitors.

Most companies attempt innovation with their own motivation. Then, what is POSCO’s motive for innovation, that is to say, the reason for POSCO to innovate? 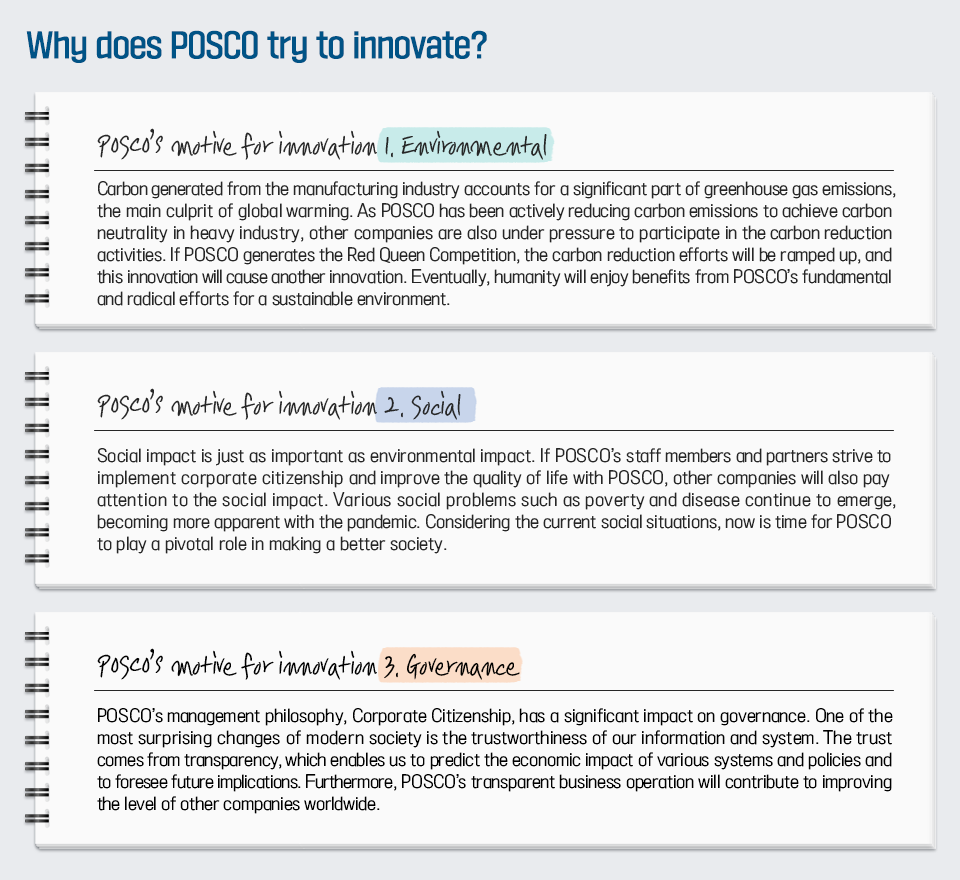 POSCO recently announced its three-stage plan to pursue carbon neutrality by 2050. The plan is to reduce carbon emissions by 20% by 2030, 50% by 2040, and finally achieve carbon neutrality by 2050. To this end, POSCO set forth an objective to reduce the existing blast furnace facilities and commercialize the hydrogen-reduction steel facilities by 2050. In particular, it presented a policy to solidify its carbon-neutral position unparalleled in the global steel industry by accelerating the development of HyREX technology.

Many experts predict that challenges and opportunities will coexist in the upcoming era of profound change, and the importance of ESG will be even greater. Then, what is the main content of the ESG business that POSCO is promoting in preparation for the profound change? 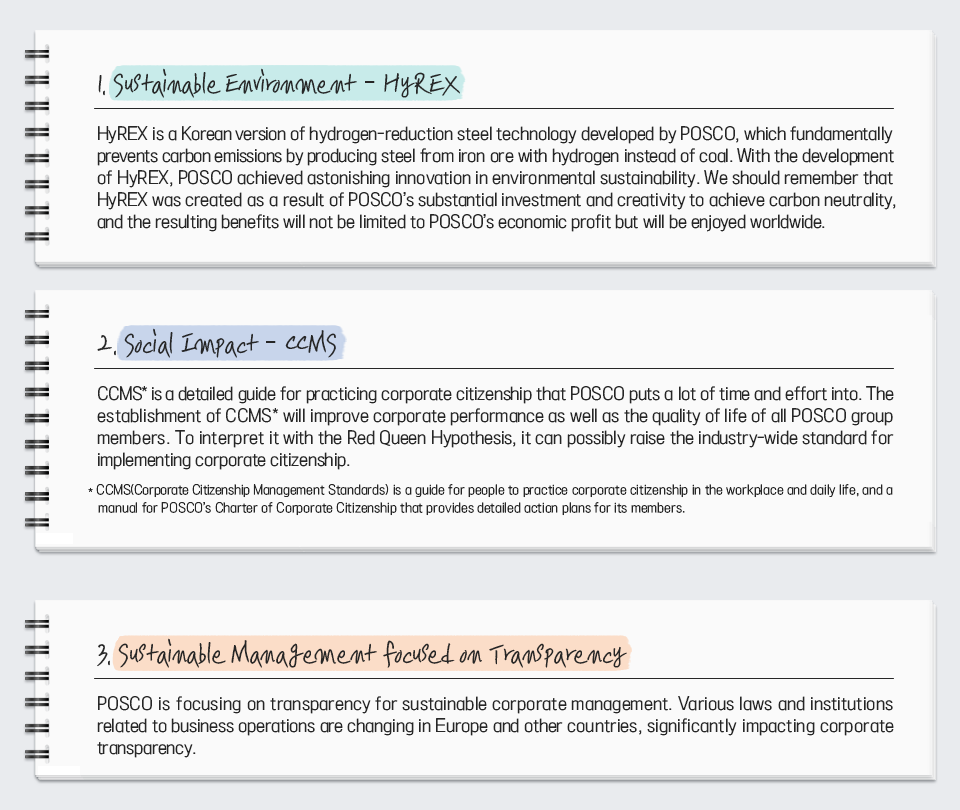 POSCO has long been a good example of corporate development and innovation, and the members have also actively participated in its innovation. Many experts were uncertain and skeptical about POSCO’s technical prowess at the time of its establishment. Still, with the unwavering belief of becoming a leader in technological innovation, POSCO has grown into a company walking shoulder-to-shoulder with the world’s greatest corporations. Consequently, the initial vision of POSCO has made what POSCO is today. 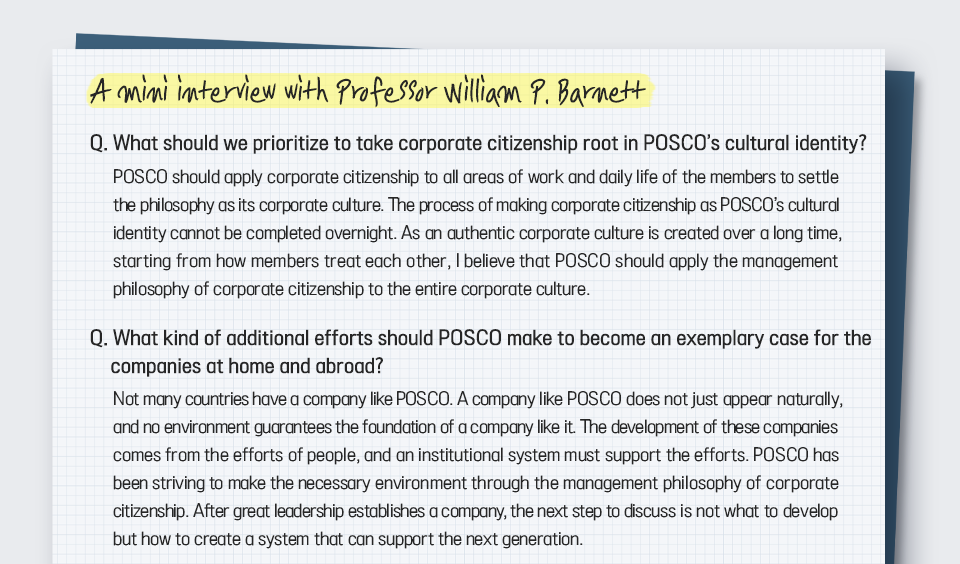 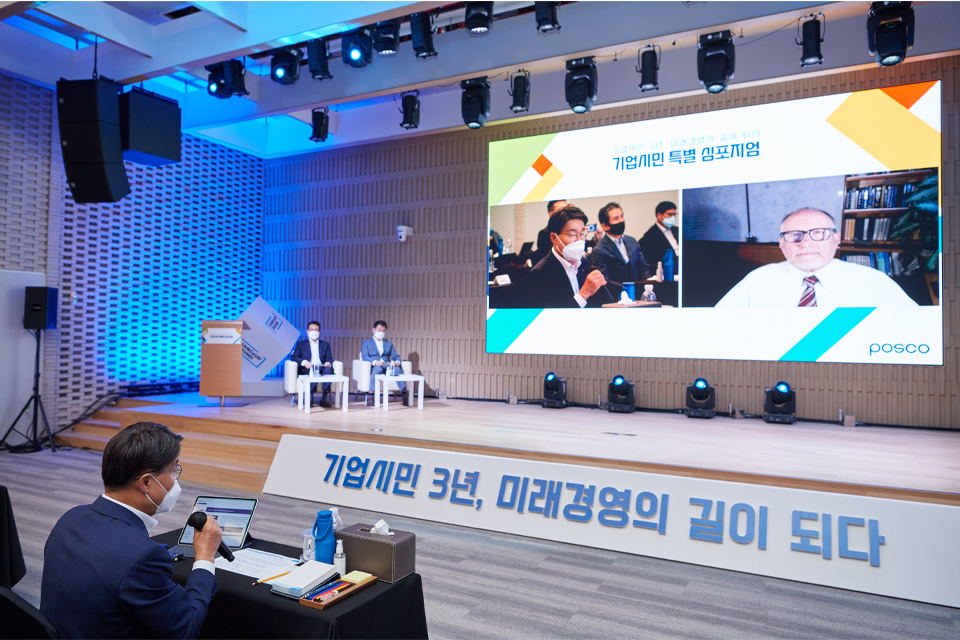