l On July 14, POSCO holds the symposium under the theme of “The Era of Demographic Cliff & Collapse of Provincial Cities: the Future Lies in a Country Where Young People Are Happy”
l The symposium provides a public sphere where academia, the government, and private companies participate in public debate and come up with solutions to resolve the low birth rate issue

Academia, the government, and corporates have joined forces to create a better society to raise children as well as address the low birth rate issue.

On July 14, the “2020 Low Birth Rate Symposium” was held at the POSCO Center, Seoul. The symposium was hosted by the Population Association of Korea and sponsored by the Presidential Committee on Ageing Society and Population Policy (PCASPP) and POSCO.

The symposium, which was held under the theme of “The Era of Demographic Cliff & Collapse of Provincial Cities: the Future Lies in a Country Where Young People Are Happy,” is significant in that it has provided a ground to share various case studies and encourage public debate regarding the low birth rate issue.

It will be the first step to publicly recognize the need to resolve the low birth rate issue. In particular, through the symposium, corporates are to perceive the importance of their roles in creating a sociocultural system that is favorable for giving birth and raising children. 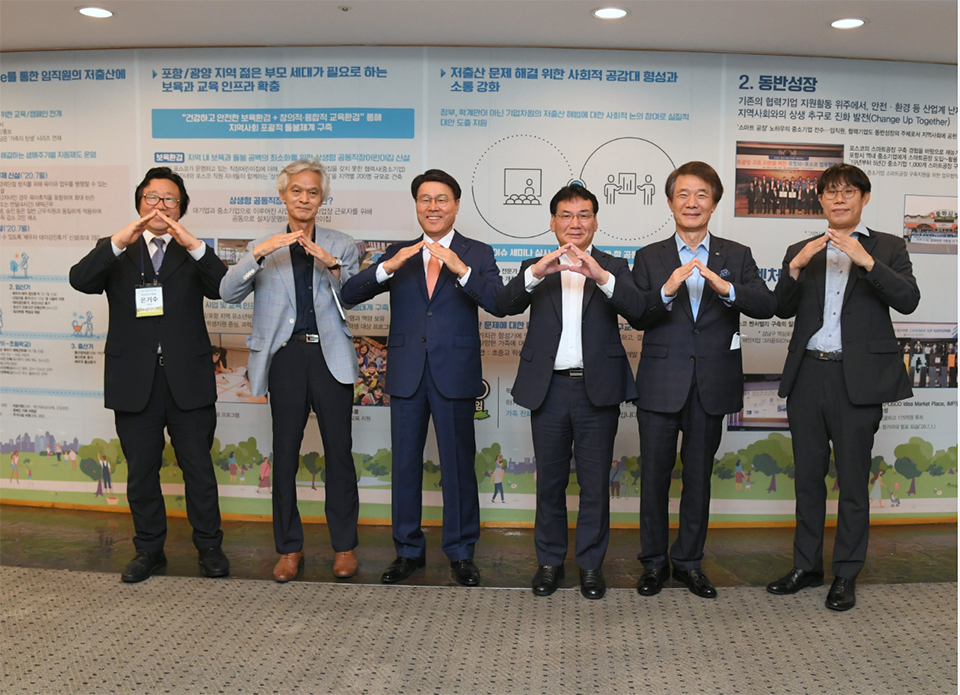 In an opening speech, Ki-Soo Eun, President of the Population Association of Korea, said, “The low birth rate in South Korea has become a significant determinant to the country’s existence.” Hyung-Soo Seo, Vice Chairperson of PCASPP, added in a congratulatory speech, “The low birth rate is disastrous to our society — it is beyond the government’s efforts. I hope that more corporates will participate in resolving the Demographic Cliff, as in the case of POSCO and SK.”

POSCO CEO Jeong-Woo Choi stated, “POSCO has introduced two systems as a means to resolve the low birth rate issue and create a corporate culture that is favorable for giving birth. One is the ‘Working-from-home for child care without career breaks’ which enables working parents to focus on both their work and childcare at the same time , thus, preventing career breaks of employees. While another is the ‘spouse prenatal checkup leave system.’ Through the symposium, I hope that academia, the government, and many corporates would join in discussing the solution to the low birth rate issue and that the policies and ideas addressed here will be realized in our society as tangible results.”

In a keynote speech replaced by video, Jung-Ok Lee, the Minister of Gender Equality and Family, introduced institutional support and the role undertaken by the Ministry under the theme of “Policy Directions of Women and Family in a Low Birth Rate Society.”

The following programs were included in the symposium: Topic announcement & presentation of case studies; “Millennial Talk!”, a talk concert which analyzes the values of the Millennial Generation regarding marriage and childbirth; and a wrap-up & policy proposal session.

In the topic announcement session, Professor Cheol-Hee Lee of Seoul National University presented a specific case — population data analysis following the construction of POSCO Gwangyang Works and SK Hynix Icheon plant — where employment led to an increase in marriage & childbirth. Lee asserted that the most important role of corporates amid the Demographic Cliff crisis is to create quality jobs that can support the parenting of employees, and that the government should also come forward with relevant policies accordingly.

“Millennial Talk!”, the talk concert was attended by author Hong-Taek Im, singer Ji-Heon Park (a father of six children), Finnish broadcaster Patri Calliola, and co-author of “Trend Korea” Ji-Hye Choi. The guests spoke of the importance of jobs in resolving the low birth rate issue, of childcare know-hows, and the childcare system of the Finnish government and corporates.

Lastly, during the wrap-up & policy proposal session, experts suggested countermeasures against the rapid demographic changes. They also presented various solutions on the role of the central government, local governments, and corporates in creating a corporate city where young people want to live. Diverse opinions were put forward on the reform of the current marriage, childbirth, and childcare systems, as well as on the influx of migrant childcare workers into the country that could help establish a proper nurturing culture.

Due to the COVID-19 issue, the symposium was broadcasted live online via the POSCO Corporate Citizenship website (http://corporatecitizenship.posco.com) to minimize contact.

To improve the quality of life of POSCO employees and address the issue of low birth rate, POSCO presented a POSCO-type role model as one of the six major Corporate Citizenship projects. Currently, POSCO is engaging in numerous activities and programs for the purpose.