10 Ways Steel is Used at Sea

Steel has long been linked to the sea. Its extraordinary versatility enables it to be used in a variety of ways, from transporting cargo around the world to preserving vulnerable marine species. Furthermore, its low carbon emissions, durability and high rate of reuse make it an incredibly sustainable material.

Here are ten interesting ways steel is used at sea. 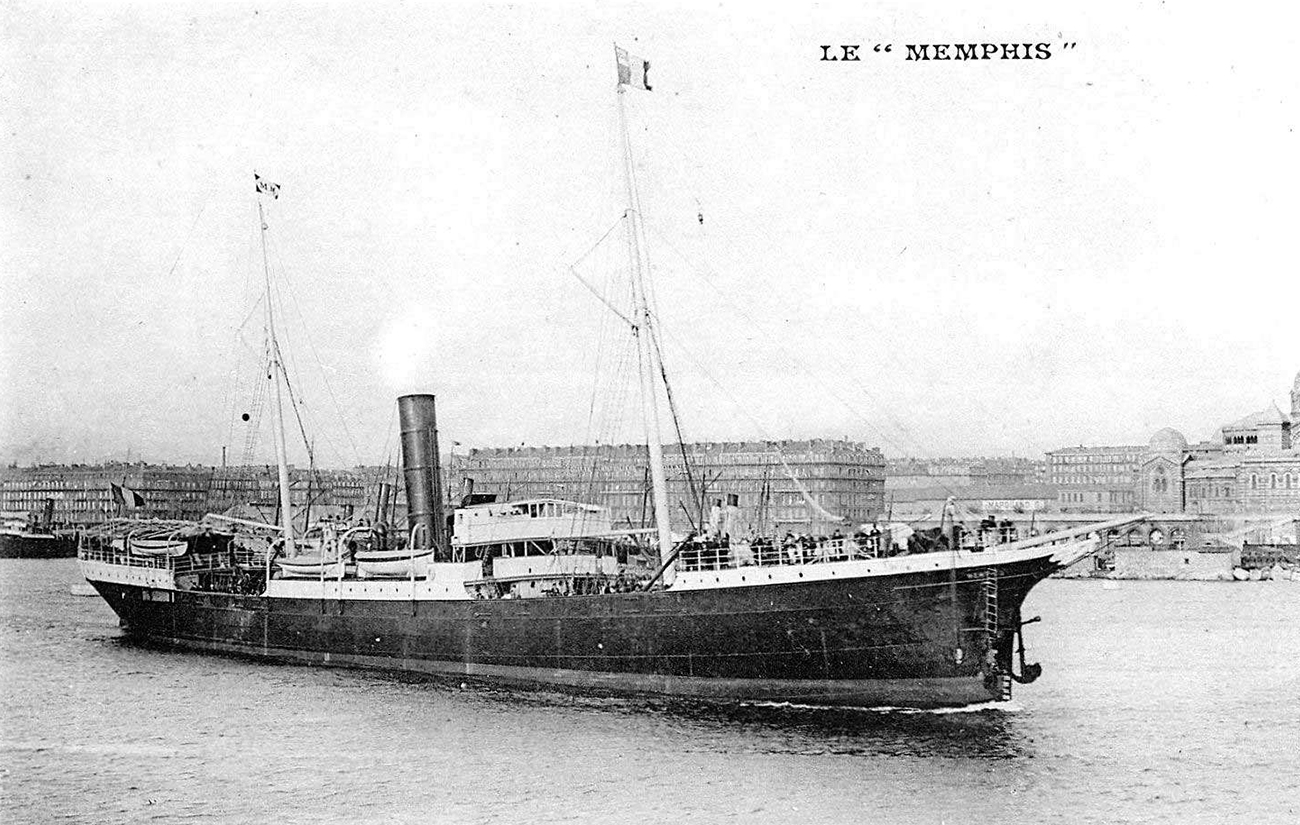 In 1940, the construction of the world’s first all-welded ship, the SS Exchequer, was completed in Mississippi, US. The steel plates of the cargo vessel’s hull were welded end-to-end rather than overlapped and riveted—a technique that revolutionized shipbuilding at the time.

Since then, ships have been made almost exclusively of welded steel, thanks to the material’s affordability and lightweight properties.

Steel plays a crucial role in protecting our lands from floods. Its durability and sheer strength make it an ideal underwater barrier to protect cities that are at high risk of flooding. 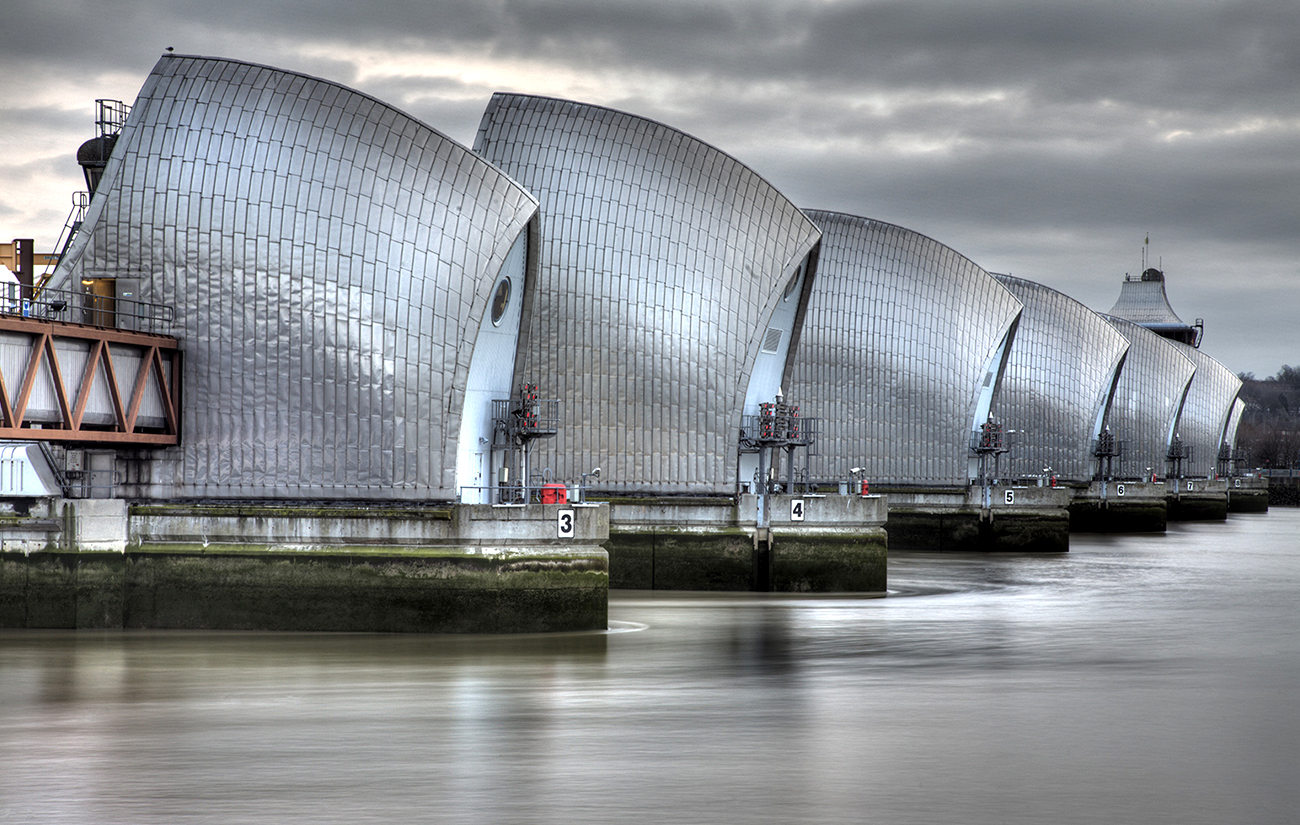 The Thames Barrier, for example, fortifies central London from floods caused by tidal surges. Weighing in at 3,700 tons, the barrier is made up of 10 steel gates and stretches 520 meters across the Thames River, the UK’s most famous waterway.

Hurricane-resistant steel has been used to create hundreds of wave-resistant barriers that surround the shorelines of the Caribbean, American Gulf Coast and Southeast Asia.

Some of these steel reefs have been designed to force waves to break offshore and deposit their energy in a different area than directly on the coastline, thus protecting beaches. Others hold in sediment on beaches to prevent coastal erosion, while still others promote water activities like surfing.

What do you get when you toss some 25,000 decommissioned New York subway cars into the ocean? A marine life habitat, of course.

Primarily consisting of steel, the Redbird Reef off the eastern coast of the United States has functioned as a source of sanctuary and food for marine life, offering more viable conditions for the growth of nutrients and organisms than the sand bottom.

Meanwhile, other materials like steel slag have been used to promote marine forestation in damaged marine ecosystems.

Steel is an essential material used in the development of tidal energy solutions worldwide, from the poles which secure turbines to the ground to their rotating blades. Considering the fact that tidal energy could eventually satisfy more than 20 percent of global energy demand, steel plays a key role in unlocking the renewable energy capacity of our oceans.

Similarly, steel makes up around 80 percent of all materials used to construct wind turbines that emit minimal carbon dioxide when producing energy.

When it comes to building the world’s biggest megaships, there’s no material as favored by engineers than steel.

Take the Royal Caribbean International’s Harmony of the Seas cruise ship, for example. It was constructed with 227,000 tons of steel—enough material to build 31 Eiffel Towers. Standing upright, it is 210 feet tall, more than three times the height of London’s Olympic Stadium, and is nearly as long as four soccer fields combined.

Noting the comparable advantages undersea tunnels have over bridges, like their ability to divert traffic and not be affected by external factors, city planners began incorporating them into city layouts in the late 1800s. 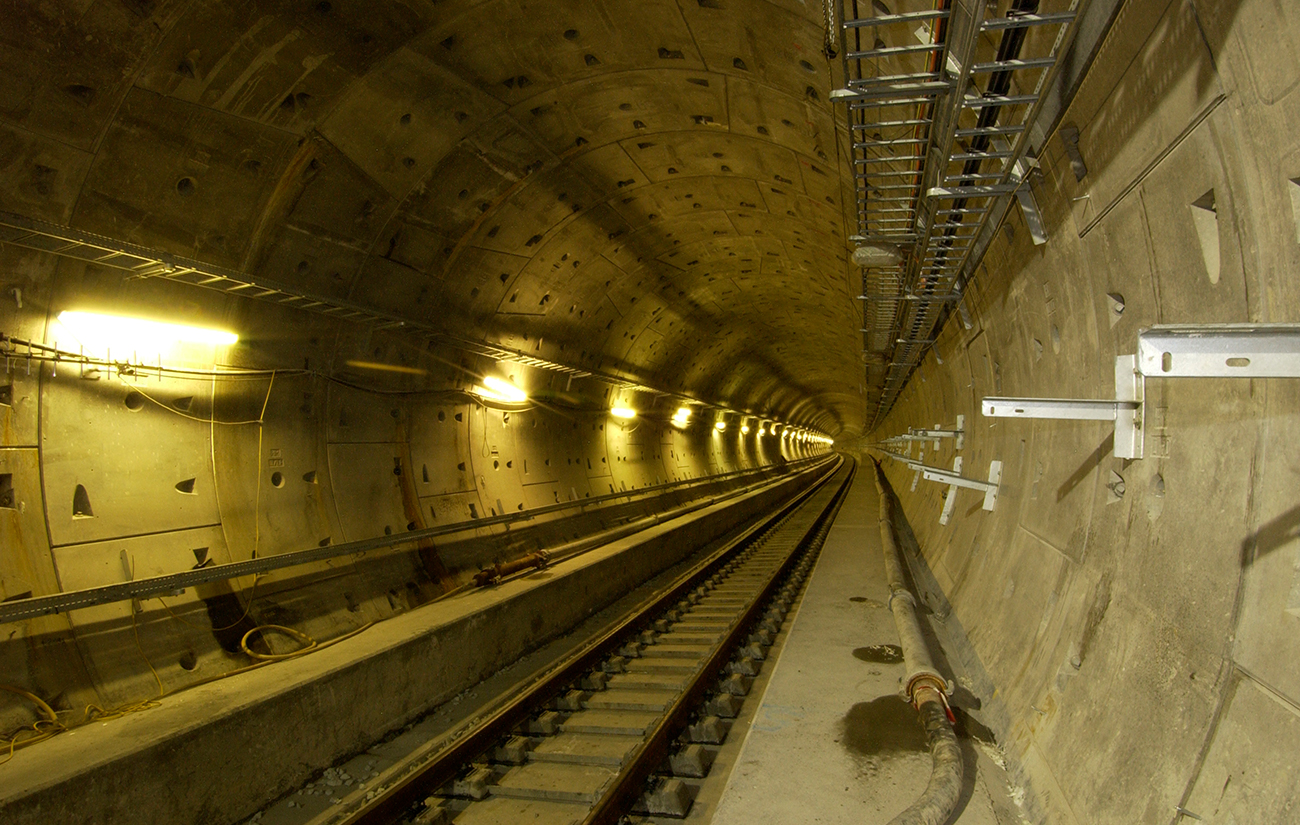 The first notion of the Channel Tunnel, which connects England and France, was proposed in 1802, but didn’t become a reality until the 1960s. With 400 trains carrying 50,000 passengers and 54,000 tons of freight passing through it every day, steel reinforces other materials to keep the tunnel strong and sturdy.

Ninety percent of global cargo is carried by sea. Because the size of steel ships and containers allows for enormous loads to be transported in a single trip, the majority of the 17 million shipping containers currently in use are made from steel.

Included among these shipping giants are Maersk’s Triple-E, the largest cargo ship in the world. It can fit approximately 18,000 shipping containers—enough space for 36,000 cars or 108 million pairs of sneakers! 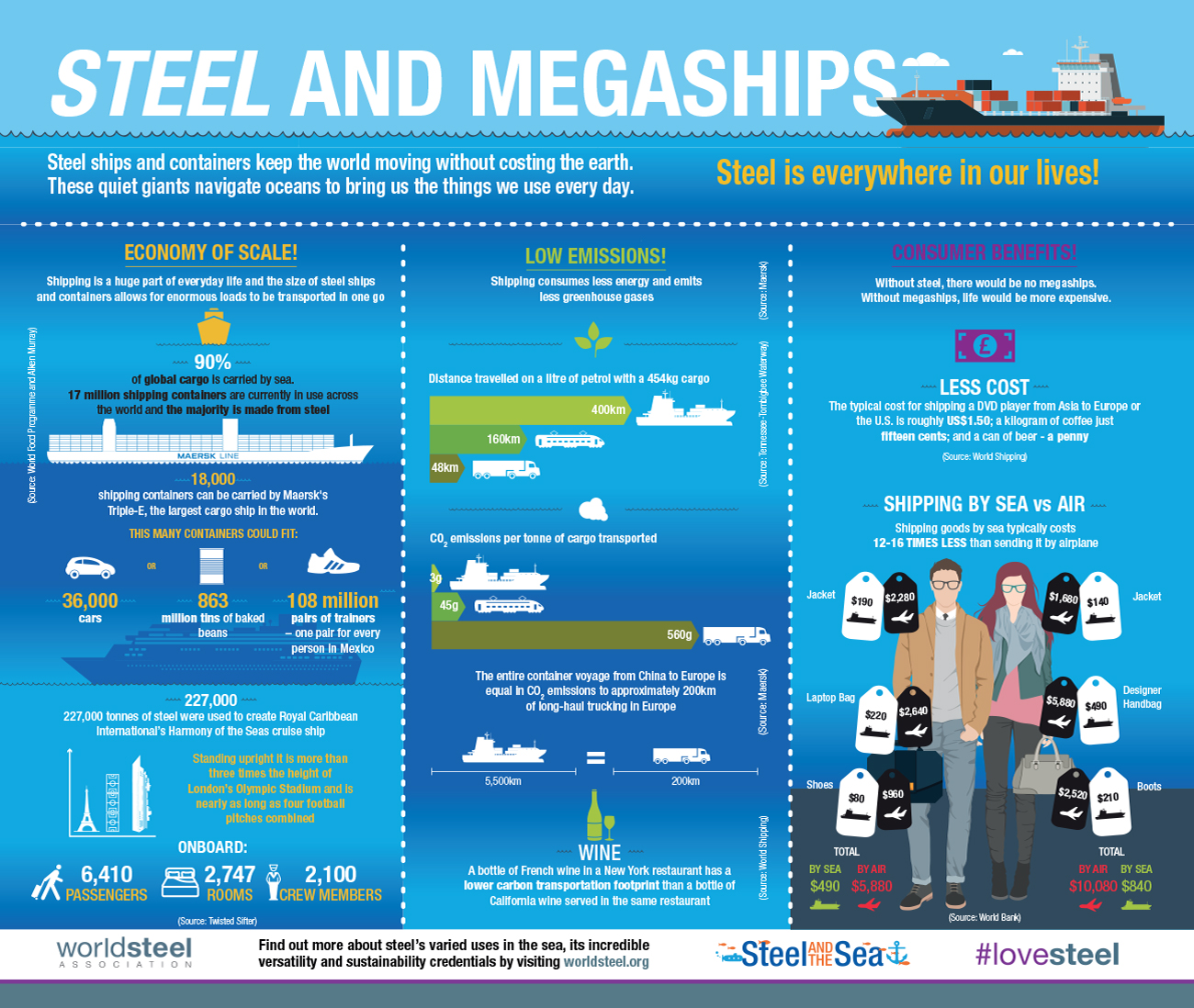 While submarine designs and oceanic capabilities have advanced over the centuries, one thing has remained constant—their steel construction.

Steel has the ability to withstand corrosion and avoid oxidizing reactions such as rust. It is also lightweight enough that it can be fast and effective in maneuvering underwater. As a result, the submarine’s steel body has enabled it to accomplish extraordinary expeditions, including James Cameron’s DEEPSEA CHALLENGER’s voyage to the deepest known part of the Earth.

Steel is essential in the construction of canals. It is used to form the structure which supports the entire operation and is also utilized to make the locks so that they are tough enough to withstand extreme forces like water pressure.

The Panama Canal, for instance, is the largest canal in the world, with around 14,000 ships passing through it annually. Thanks to a system of large steel locks, the canal connects the Atlantic and Pacific oceans.

This article is based on the #lovesteel materials published by the World Steel Association.

Steel Wonders of the World: The Panama Canal

Water World: The Past, Present and Future of Undersea Tunnels