Steel Wonders of the World: The Panama Canal

Episode 5 of Deborah Cadbury’s BBC documentary series, “The Seven Wonders of the Industrial World,” is the story of the most expensive engineering enterprise in history, the construction of the Panama Canal.
Explorers as early as 1534 have searched for a passage through the jungles of Panama, giving ships an alternate route to the west coast of North America, avoiding the long, treacherous Cape Horn around the southern tip of South America. Beginning as a dream to unite the world by carving a waterway between two continents to connect the Atlantic and Pacific oceans, the first attempts to build the canal began in 1881 by the French. It was a bold undertaking meant to bring honor to France, but would eventually leave France in economic depression.

Connecting Two Oceans
Led by Ferdinand de Lesseps, who developed the plans for the Suez Canal in 1869, construction to build a sea-level waterway began. His success building the Suez Canal made him a legend, though the Panama proved to be a much tougher environment than the Suez. He raised $60 million to establish a canal company. 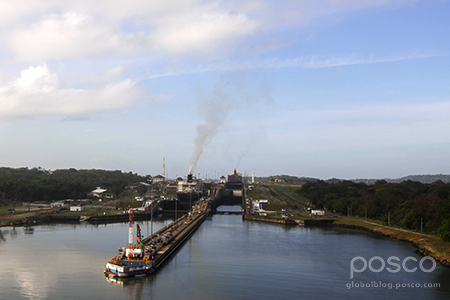 Beginning at the Limon Bay in the Atlantic, the canal would follow the course of the Chagres River Valley for half its course, cutting through Central America at its narrowest point. But unlike the Suez Canal, they would encounter a mountain range. The plan was to dig through the mountains at the lowest point, the Culebra (meaning snake in Spanish) to build a sea-level canal. One hundred twenty million tons of earth had to be moved and progress was slow. Mud and rock slides created chaos at excavation sites, causing workers to make cuts shallower than they first anticipated, taking more time and money. Critics tried to persuade de Lesseps to reconsider building a lock system, but off-site in France, he convinced investors to quadruple the budget instead. The Chagres River flooded during rainy seasons, rising over three meters in a single hour. The rain washed away carved out dirt, machinery and men. The canal would take 15 years longer than first promised, and de Lesseps concealed this from his investors. 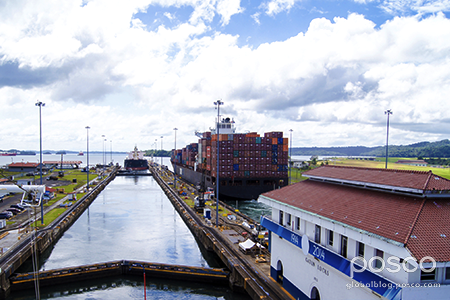 Aside from the dangers of the earth itself, workers were battling yellow fever, a mysterious tropical disease, assumed to be caused by poisonous gases in the air. Six thousand men died in the first five years, with an alarming 350 dying every month. Panama became known as the fever coast. By the end of 1885, only one tenth of the canal had been dug. De Lesseps’ principle engineers pushed for a lock system, and resigned when de Lesseps refused. In 1888, his canal company eventually went bankrupt, triggering the biggest financial crash in human history. De Lesseps died a ruined man, charged with bribery and found guilty of misappropriation of funds. The scandal of the Panama Affair, brought down the French government, and Panama would forever be associated with disgrace.

Reviving the Canal
Seventeen years later, another country picked up where the French had given up. In 1902, the U.S. Senate voted to pursue the French efforts in Panama. Purchasing the project for a mere $10 million, President Theodore Roosevelt wanted the canal so the U.S. Navy could dominate the oceans. He handpicked the primary engineer, John Stevens, who built railroads around the world. As a railroad engineer, Stevens had a new approach, using dynamite to blast his way through the Culebra. He built a train system as a giant conveyer belt to remove excavated rock out of the cut, before it could slide back in. Dirt trains, a plow system and moveable tracks did the work faster than 600 men. His use of industrialized steel tracks sped up excavation and reduced the risk of mudslides. 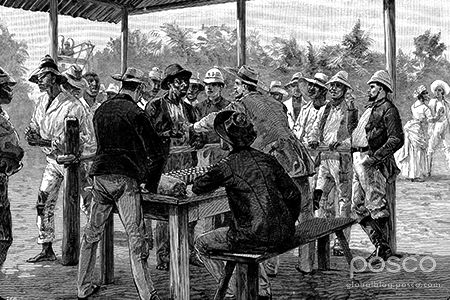 In May 1906, the rains returned and Stevens’ new methods and machinery were no match. Stevens realized digging through the Culebra would not be possible, and the dream of a sea-level canal was buried. He decided to dam the Chagres River where it met the Atlantic to build a lock system, flooding a huge section of the country. Thus, he created the largest man-made lake which would raise ships through the Culebra. 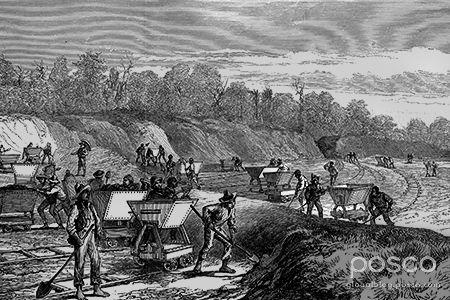 Suddenly, in March 1907, Stevens quit without reason. Roosevelt turned to the army, and Colonel George Goethals took over the project. The locks of the Panama Canal are the largest concrete structures on earth. Goethals worked for six years, blasting through 80 million tons of rock, shattering all excavation records. His steel lock gates stood six stories high, each chamber bigger than the Titanic. Nothing of this magnitude had been powered by electricity ever before. In 1913, the Culebra was finally conquered, changing the world forever by joining the Atlantic and the Pacific oceans. A humble tugboat was the first ship to make the journey through the Panama Canal.

A Modern Canal Made Possible with Steel
The Panama Canal has since been updated, under many phases of expansion. In 1935, another dam, the Madden Dam, was built to create another man-made lake to store water for the canal. Following WWII, relations between the U.S. and Panama became tense. In 1974, negotiations towards a settlement between the U.S. and Panama began. In 1999, the Panama Canal Authority (ACP) took control of the canal, and it is now one of the chief revenue sources for Panama.
A third set of locks are under construction, and in June 2015, flooding of the new locks began. The canal is set to reopen in April 2016. The electro-mechanical installation phase commenced with the installation of the first steel rolling gate on the Atlantic side. With 16 gates total, the massive steel structures weigh about 3,400 tons. The size of the gates vary depending on locations and positions on the lock chambers. The tallest is eleven stories high.
The American Society of Civil Engineers has named the Panama Canal as one of the seven wonders of the modern world. Steel played a large role in the construction of the canal, from the tracks, cranes and industrialized carts that removed the dirt from the Culebra. The great Panama Canal could never have been realized as a sea-level canal, as it was first dreamed. Only due to a system of large steel locks, does the canal exist today, finally connecting the Atlantic and Pacific Oceans.