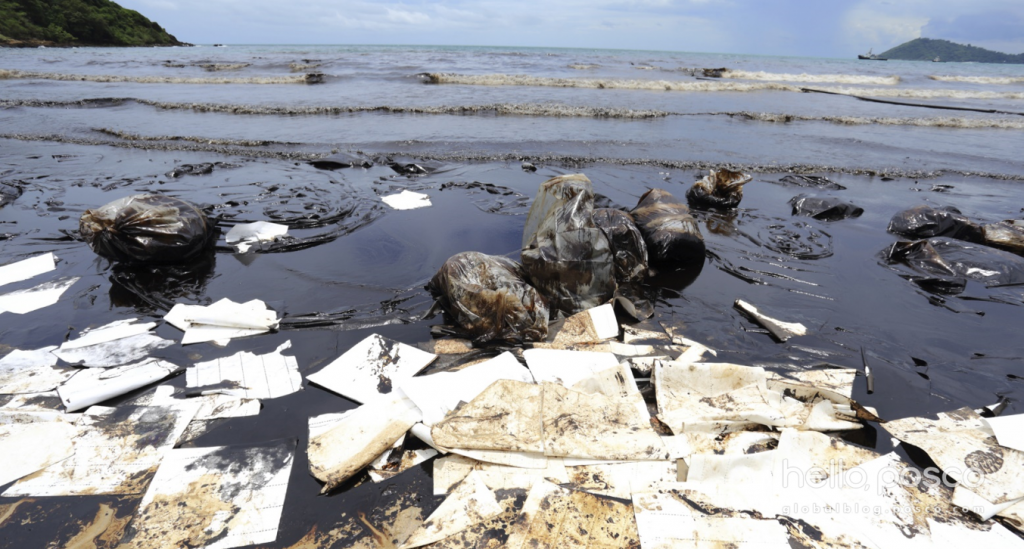 In the North Pacific, there is an entire area the size of Texas that is made up primarily of garbage. This floating island of waste, not-so-affectionately referred to as the Great Pacific Garbage Patch, swirls around slowly with the ocean currents, imprisoning ill-fated sea creatures and marine life, while trapping non-biodegradable debris, breaking it down into tiny toxic bits and dispersing it throughout the ocean’s waters.

Of these marine wastes, plastics are perhaps the most common and the most harmful, as they tend to act as a chemical sponge, concentrating the most damaging pollutants found in the world’s oceans. In fact, for every pound of natural plankton in this area, there are six pounds of plastic.

This gyre, or system of circular ocean current formed by the Earth’s wind patterns and rotational forces, spans waters from North America’s West Coast to Japan, where it meets other gyres. Here, the marine waste is further circulated along oceanic highways.

The continuously circulating pollution, along with warming water temperatures, has severely affected marine ecosystems throughout the world. South Korea, for one, began to encounter the ill effects of this problematic situation in the early 1970s with the first occurrence of reef degradation, or “the whitening phenomenon,” off the peninsula’s southern coasts. “Stressed” coral, unable to photosynthesize due to decreasing algae, quickly began to perish.

As industrialization in these areas continued to increase and tourism began to flourish, damages expanded across the eastern and southern coasts, as well as Jeju Island. The seawater’s self-purification capability steadily weakened and the accumulating amount of marine wastes and toxic substances permeating Korea’s waters kept sunlight from reaching the ocean floor. Without sufficient sunlight, and thus nutrition and oxygenation, the number of algae and sealife dwindled significantly, causing distress to both the ecosystem and the nation’s fishing economy. 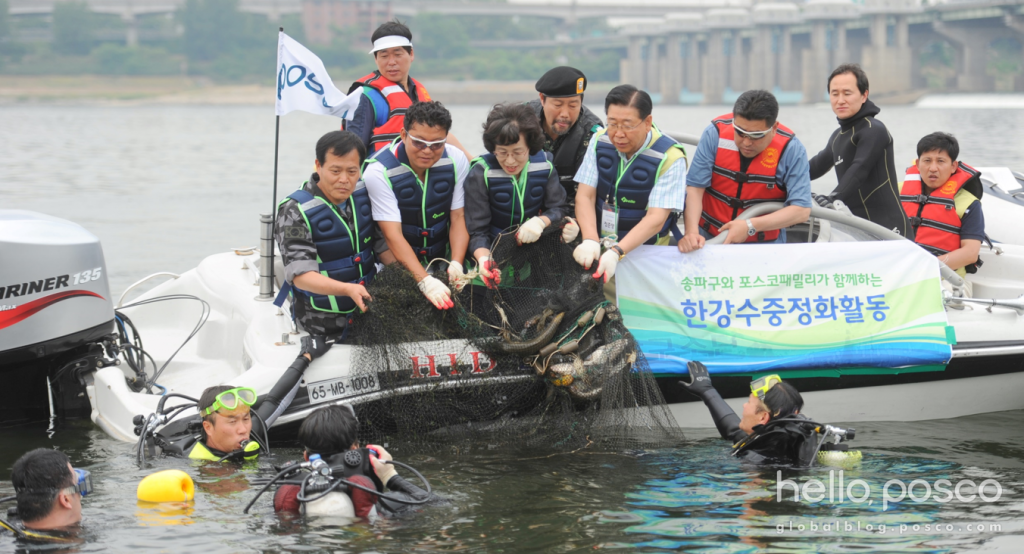 In an effort to rehabilitate Korea’s valuable marine ecosystem, POSCO, a world leading steel company, teamed up with the Research Institute of Science and Technology (RIST) and the Korean government to lead an unprecedented environmental initiative. In 2000, after extensive research, POSCO and RIST developed Triton to promote marine forestation in the damaged areas. 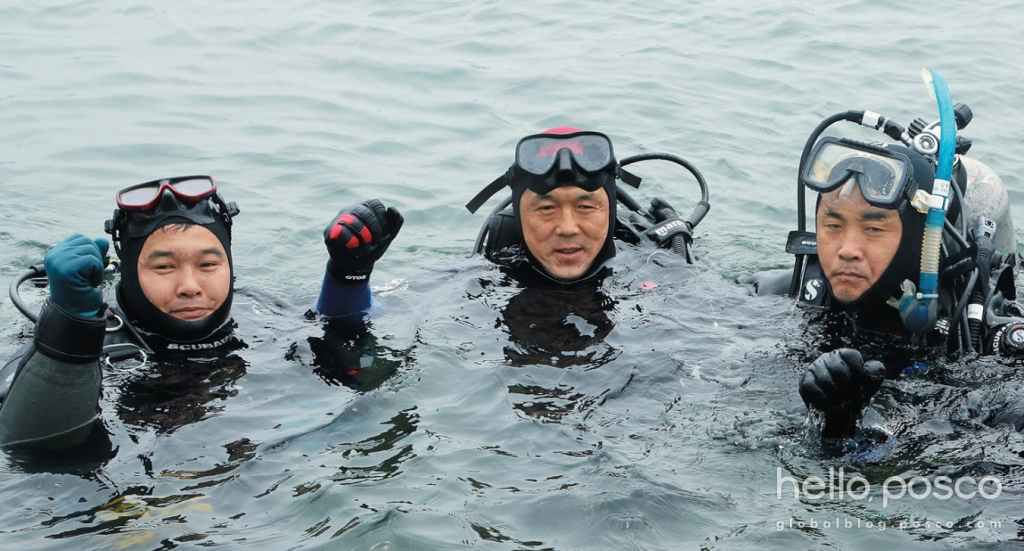 Named after a sea-god of Greek mythology, Triton is structure made of steel slag, an eco-friendly by-product of steel making that contains a high proportion of iron and calcium, elements that just so happen to provide ideal conditions for the growth of seaweed and algae spores, and the purification of contaminated sediment.

It didn’t take long—a year and a half, to be precise—for the forestation efforts to be effective. With steel reefs providing a more habitable, biodiverse environment, abalone and sea cucumber, creatures that had all but died out, prospered. Additionally, the restoration of the marine ecosystem contributed to the increase of fish productivity and therefore the local economies of coastal towns and villages. 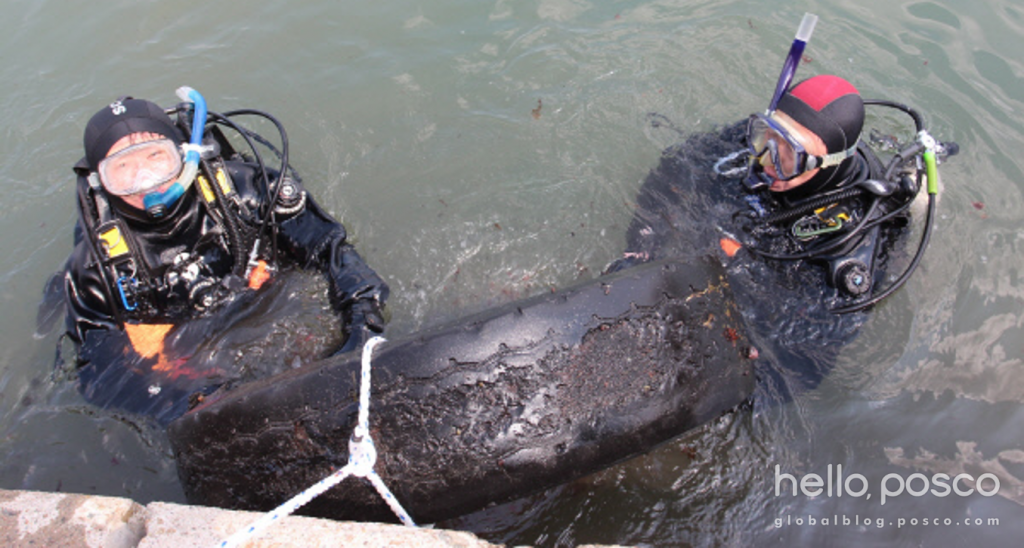 That year, close to 200 Triton reefs were installed in eight fisheries along the coastal area of Geomun Island. Since then, POSCO has used steel slag to implement numerous other sea slag forests, and has played an active role in the nation’s marine afforestation projects to help the ecosystem adapt to climate change and demonstrate how by-products from the steel industry can be used in a way that yields positive outcomes for the environment and for communities.

Volunteering to Make a Difference 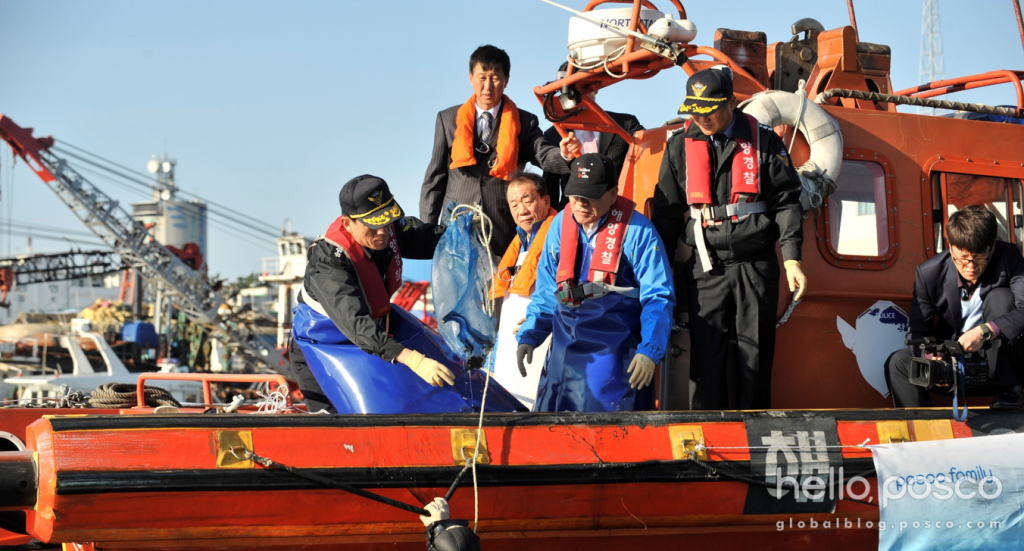 Unlike other sea-gods, Triton possessed a twisted conch shell, on which he blew like a horn to placate or raise the ocean waters. Legend has it that its sound was so jarring that it could put the giants, who imagined it to be the roar of a dark wild beast, to flight. Like Triton’s conch, POSCO hopes to make a lot of noise about the issues plaguing the world’s oceanic ecosystems. 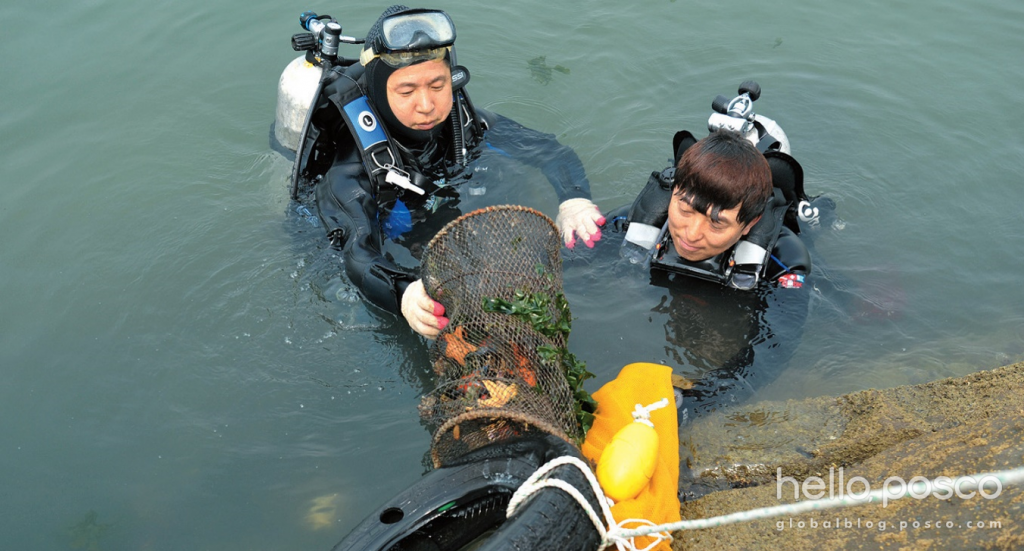 As such, some 600 of the company’s employees who are passionate about making a difference have joined together to create POSCO Clean Ocean Volunteers. The group, which is dispersed throughout Korea, plays a leading role in marine conservation and educating the public about the importance of the marine environment. The group’s past efforts, in conjunction with local governments, maritime police and the coast guard, have included activities such as water purification, beach clean ups and the salvaging of sunken ships. The Clean Ocean Volunteers have also been proactive in the removal of , which in recent years have increased exponentially and have had a negative impact on the local fishing industry.