While the world’s population continues to grow and economies around the globe become more and more developed, demand for energy is skyrocketing. Simultaneously, climate change concerns demand that these energy solutions be sustainable. As such, the steel industry plays an important role in such production technologies, including those that generate wind power—a clean energy source that, unlike fossil fuels, does not emit carbon dioxide.

One Turbine, Many Steel Parts

From its all-important foundation down to its screws and studs, every part of a wind turbine—machinery used to produce wind energy—depends on iron and steel. In fact, steel, on average, represents 80 percent of all the materials used to construct a wind turbine. The main components of the machine are the tower, the nacelle and the rotor. While the blades are generally made of other materials, such as carbon fiber or alloys, steel holds the turning blades in place, utilizing a cast iron or forged steel rotor hub.

At the top of the tower are the rotor and the nacelle. Because a nacelle can weigh as much as 300 tonnes, steel’s strength makes it the perfect material for the nacelle’s frame, housing and machinery. The nacelle contains some of the highest-value steel, including electrical steel, a specialty metal tailored to fabricate the specific magnetic properties that make wind energy feasible.

Behind the blades, a low-speed shaft transfers the rotational force of the rotor to the gearbox. Here, the gears are operated using precision tools and hardened steel components, and increase the low rotational speed of the rotor shaft to the high speed required to power the generator. Next, the mechanical energy captured by the blades is converted into electric energy, which is then directed to the transformer and converted to the higher voltage needed by the electricity grid.

Most of the steel in a wind turbine is utilized in the tower. There are a variety of towers, including steel-concrete hybrid towers, steel truss towers and steel lattice towers, but about 90 percent of all wind turbine towers are tubular steel towers. To construct one of these, fan-shaped plate segments are cut from rectangular parent steel plates and are then roll-formed and welded into cone sections. The tower and the foundation, which connects the turbine to the ground or seabed, have to be tailored to carry these heavier blades and the bigger rotor that they necessitate.

Steel-Powered Wind Energy of the Future

From a climate change and sustainability perspective, it is important to take into account the life cycle of wind turbines. Because steel is infinitely recyclable and has a limited environmental impact, it only makes sense that it is a primary material in turbine construction. The recovery of the material at the end of its useful life (which, in wind turbines, is usually 20 to 30 years) also helps to regain upfront costs, owing to the value of steel scrap. As traditional turbines age, maintenance and replacements are needed. In response to this disadvantage, new solutions are being explored to revolutionize wind energy. 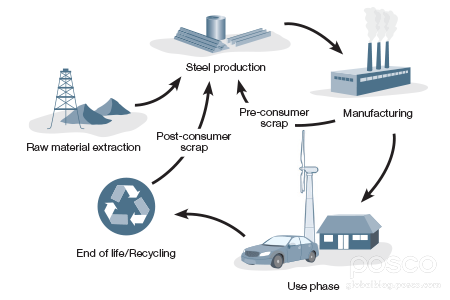 Enter the EWICON (Electrostatic Wind Energy Converter)—the first ever wind energy generator that requires no blades or moving parts. Developed by researchers at Delft University of Technology in the Netherlands, the EWICON is a large rectangular-shaped steel frame that stands vertically and is made up of 40 steel tubes that run horizontally within the frame and generate charged water droplets. The droplets are discharged from the steel tubes and blown by the wind. Their movement generates power that is transferred to the electricity grid. Because the EWICON doesn’t have moving parts, maintenance costs are minimal. Additionally, it doesn’t make noise, vibrate or generate shadows, so it is more suitable for urban areas.

Likewise, the Dutch Wind Mill, a new project that is part of a collective effort to transform the Dutch city of Rotterdam into a clean technology city, incorporates EWICON technology and serves as another example of the ever-improving wind energy technologies.

This “Windmill of the Future” has been designed as a 174-meter-tall bladeless steel-and-glass windmill that is to be encased by 30,000 square meters of space containing apartments, a panorama restaurant and a hotel, which will all be linked together via a series of rotating observation cabins. The structure’s inner ring area will be comprised of a framework of horizontal steel tubes that generate energy in a new and sustainable way.

Dubbed the Electrostatic Wind turbine, it is a giant step up from a traditional wind turbine. Not only will this structure work like an ecosystem, but it will also be entirely energy-neutral and connected to a smart grid for surplus energy. Other technological features include an interactive information layer within the glass facades of the cabins, as well as systems for water treatment for organic waste and photovoltaics. At the moment, the project is in its research and development stages, but is set for completion between 2020 and 2025.

Continued technological advancements and supportive policy measures have the ability to dramatically increase the future of wind energy development around the world. In doing so, they will provide a more sustainable energy solution to meet the changing demands of the world. Steel will continue to support both traditional wind turbines, as well as the wind energy technologies of the future.