With the Eco-friendly LNG-powered Vessel, POSCO Is All Ready to Set Sail!

At a shipyard in Mokpo on December 11 2020, a ship naming ceremony was held for two vessels that received the name of “HL ECO” and “HL Green”. Both vessels, able to carry up to 180,000 tons, are the world’s first LNG-powered bulk carriers, as well as eco-friendly carriers that POSCO has preemptively introduced to replace conventional ones. POSCO’s 9% nickel steel was applied as materials for the fuel tanks of the vessels, whereas 42,000 tons of POSCO steel plates were used in the bodies. The ships, HL ECO and HL Green, will transport iron ore and coal to steelworks, traveling between Korea and Australia. 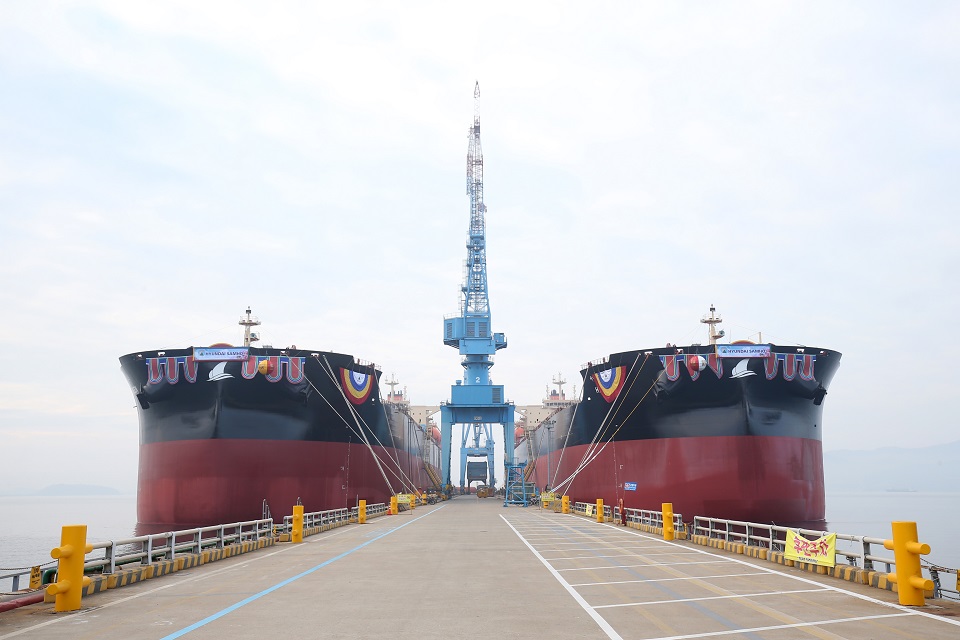 ▲ A photo of HL Green (left) and HL ECO (right), the world’s first LNG-powered bulk carriers that POSCO has introduced as an eco-friendly raw material carrier

★ What is an LNG-powered bulk carrier?

Identifying car models according to fuel type or purpose isn’t a difficult task, but classifying ships is somewhat unfamiliar. Especially when Liquefied Natural Gas (LNG) is included in the ship’s name, it becomes more confusing — since LNG can be transported onboard the vessels and be used as fuel to power them as well. To better understand LNG vessels, let’s take a look at the following question.

Q. Choose the incorrect statement from the following regarding LNG vessels.

※ Answer
LNG is made by liquefying natural gas mainly containing methane (CH4) for storage and transporting. When it is cooled to -162℃ and liquefied, the volume is compressed to 1/600, so LNG shipping is more convenient in liquid than gas. Therefore, the incorrect statement would be ⓛ.

l The Advent of the Golden Age of Gas

In 2019, the global demand for LNG reached 359 million tons, a 12.5% increase compared to 2018. U.S. oil and gas company Shell also forecasts that LNG demand will increase to 700 million tons in 2040. The keyword driving demand for LNG is “eco-friendly”. Especially starting from this year, vessels that do not meet the regulations of the UN’s International Maritime Organization (IMO) will not be able to enter the port of a member state. Therefore, just as electric vehicles and hydrogen vehicles are in the spotlight of the automotive industry, eco-friendly ships, such as LNG-powered vessels, are receiving the limelight in the shipbuilding industry.

According to a report issued in August 2020 by the POSCO Research Institute (POSRI), the shipbuilding scale of LNG-powered vessels is expected to expand from 20 trillion KRW in 2020 to 130 trillion KRW within five years, an increase by more than six times. The report also stated that ships to be ordered by 2029 are 2,500 to 3,000, and by 2030, it is estimated that 60% of the ships built in Korea will be LNG-powered vessels. Ten years have passed since the International Energy Agency (IEA) first mentioned the “Golden Age of Gas” in its annual report, and it is becoming reality in the forthcoming low carbon age.

l Why Are LNG-powered Vessels Eco-friendly?

LNG is an eco-friendly energy source, effective in reducing emissions of sulfur oxide by 99%, nitrogen oxide by 90%, and carbon dioxide by 30% compared to conventional fuels. Its fuel efficiency is comparable to that of bunker oil and the price is also reasonable. Especially in 2020, due to the expanded supply and the contraction of energy demand triggered by COVID-19, the price of LNG dropped lower than that of coal at one point. Based on the Japan Korea Marker (JKM), a price index of Northeast Asia, the natural gas unit *1MMBTU (Million British Thermal Unit)’s price in March 2020 recorded 2.43 USD, which was lower than that of Australian coal (2.56 USD) for the same amount of heat.

*1 MMBTU: The amount of energy required to raise or lower the temperature of one pound of water by 1 degree Fahrenheit. It is generally used as the basic unit for measuring LNG.

The use of LNG is also further encouraged since IMO 2020 regulates the amount of sulfur oxides emitted from ships to be reduced from the current 3.5% or less to 0.5% or less starting from 2020. Of course, there are other ways to meet such standards without LNG. Low sulfur fuel can be used instead since it contains less sulfur, or conventional fuel, like bunker fuel, can be continued to be used, as long as an exhaust gas cleaning system (Scrubber) is installed. However, low sulfur fuel is bound to increase ship operating costs due to its high price, and exhaust gas cleaning systems are not only expensive but also difficult to install in certain ships because of their gigantic size. Also, some countries restrict ships equipped with the system, so there is a limit to the wide use of the system.

Therefore, introducing an eco-friendly LNG-powered ship equipped with a dual fuel (DF) engine utilizing both LNG and crude oil might seem ideal, but this option requires a lot of investment and time since the ships have to be built anew. 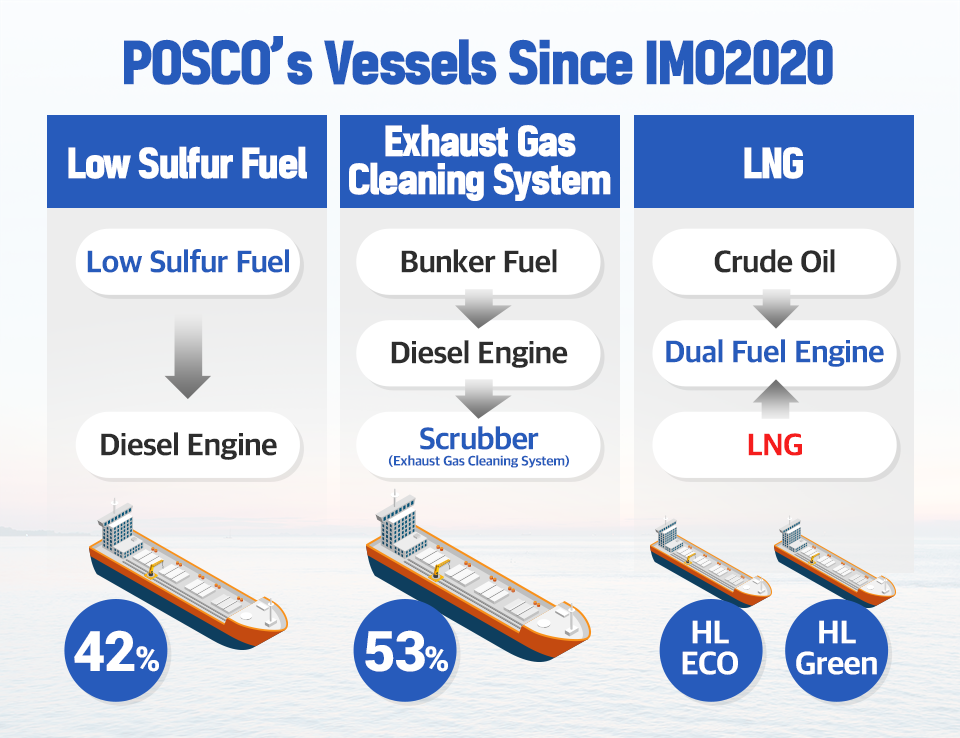 It took two years for POSCO to introduce two LNG-powered vessels. In June 2018, an agreement was signed between the Ministry of Oceans and Fisheries, POSCO, H-Line, and KOGAS. From December that year, Hyundai Samho Heavy Industries began building the ship, and exactly two years later, POSCO could hold the ship naming ceremony. POSCO is currently participating in the low-carbon & eco-friendly policy even in the ocean by installing exhaust gas cleaning systems on 20 vessels, which is more than half of the total carriers, and by utilizing LNG and low sulfur fuel in the remaining raw material ships.

l LNG-powered Vessels: Why Korea Is the Best

The heat of the global shipbuilding industry last year was the Qatar LNG project. Qatar, the world’s number one LNG producer, plans to increase its current production of 77 million tons per year to 126 million tons by 2027 since it expects that demand for LNG will skyrocket in the future. Accordingly, the country placed large-scale orders for LNG carriers last year. The orders, known to be the world’s largest, reached a whopping 27 trillion KRW amounting to a maximum of 120 vessels with 200 billion KRW per ship. Korea, China, and Japan all competed to win the contract and Korea won the most amount with 23.6 trillion KRW.

In June last year, Hyundai Heavy Industries, Samsung Heavy Industries, and Daewoo Shipbuilding & Marine Engineering signed an agreement with Qatar Petroleum (QP), a state-owned oil company in Qatar, and reserved 100 LNG carrier building slots by 2027. Earlier in April, there were voices of concern that Korea might lose its spot as the leader of the LNG carrier market. However, the concerns proved unnecessary.

Korea has positioned itself as the world’s number one in terms of orders for the past three years. And there is one specific advantage that sets Korea aside: the technology to build LNG-powered vessels. Since LNG carriers are at the same time LNG-powered vessels, the achievements of the Qatar project weren’t a huge surprise.

The reason Korea is leading the sector of LNG-powered vessels is not only because it possesses excellent competitiveness, such as abundant experience and know-how to build large ships, but also due to its outstanding technology competitiveness in core facilities required for LNG-powered vessels, like fuel tanks, engines, and fuel power systems. Just as gasoline vehicles are replaced by electric vehicles, the engines of ships are changing according to fuel type. Korean shipbuilders have extensive experience in applying dual fuel engines that use crude oil and LNG, and the latest engines that have 10% better fuel efficiency to LNG-powered vessels. They also possess their own fuel supply system. Just as for LNG carriers, Korean shipbuilders have world-class design and construction technology for fuel tanks. The world’s first LNG-powered bulk carriers HL ECO and HL Green, introduced as POSCO raw material carriers, are made with 100% POSCO steel. Especially, this is the first time POSCO’s 9% nickel steel was applied to fuel tanks. 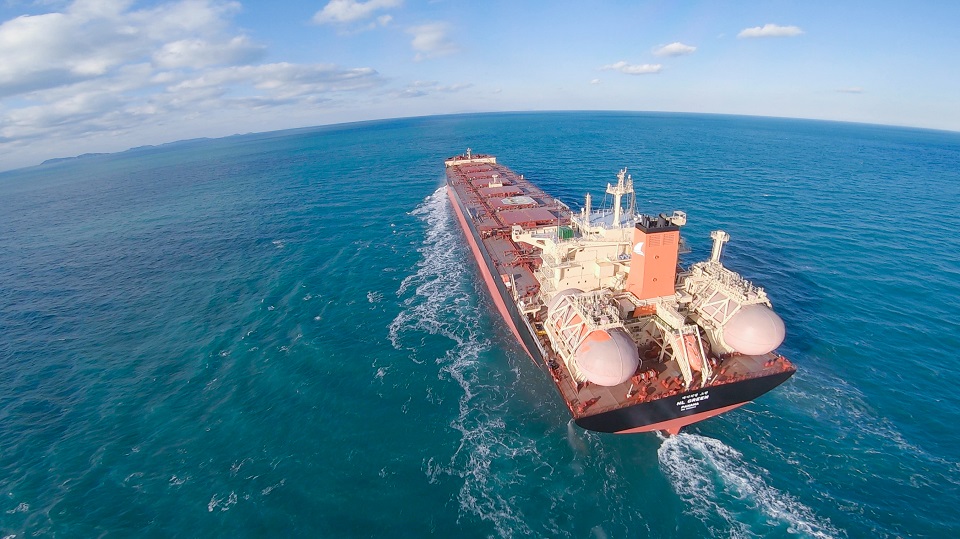 l With Fuel Tanks for LNG-powered Vessels, POSCO Is Ready to Set Sail!

9% nickel steel is the most widely used steel for producing LNG storage tanks since it maintains outstanding strength and toughness even at extremely low temperatures that reach -163 degrees Celsius. 9% nickel steel could only be produced by few steelmakers in the past, so domestic shipbuilders had to depend on imports. However, POSCO succeeded in developing it for the first time in 1993, and after quality stabilization, production for the material has been accelerated from 2007. Recently, POSCO has been in active cooperation with the Big 3 shipbuilders in Korea to develop technology for LNG storage tanks using this material. By applying POSCO 9% nickel steel on the world’s first LNG-powered bulk carrier, POSCO has succeeded in material localization.

According to the regulations of the International Maritime Organization (IMO), only nickel alloy steel, stainless steel, 9% nickel steel, and aluminum alloy steel were permitted to be used as cryogenic materials for LNG tanks on board an LNG carrier. But there is one material that received approval two years ago — POSCO’s own high manganese steel. While 9% nickel steel has a downside of being expensive and unstable supply and demand, high manganese steel is about 30% more economical than 9% nickel steel. Its supply and demand are also stable due to its rich reserves. In December 2017, POSCO succeeded in applying high manganese steel to LNG tanks of the 50,000-ton “Green Iris,” the world’s largest LNG-powered bulk carrier at the time.

Of course, there is a view of LNG as a transitional fuel. This is because the next step of IMO 2020 is IMO 2030 which targets to reduce CO2 emissions by 40% compared to 2008. The eventual goal is IMO 2050, aiming to reduce CO2 emission by 70% compared to 2008, and attaining a zero-carbon society. When this is realized, hydrogen will replace conventional fossil fuels. However, until that day arrives, the eco-friendly vessels to represent at least the next 10 or 30 years will be the LNG-powered vessels. In the Golden Age of Gas spreading across the ocean, POSCO’s eco-friendly steel is sailing along the journey.