2020/11/20
‘Eco-friendly’ would be a milestone that all — from individuals to corporates — encounter. POSCO’s GPS (Green POSCO Solution) is also on its way towards a greener future. POSCO Newsroom presents a special series in the name of GPS, covering the story of how POSCO is leading our daily lives to become more eco-friendly.

When it comes to energy, the first things that come to mind would be fossil fuels, coal and oil in particular. These two most common energy sources aren’t considered eco-friendly. On the contrary, the next most frequently used energy source is Liquefied Natural Gas (LNG), and this is referred to be eco-friendly!

Do you know anything about LNG? I heard that LNG is made by liquefying natural gas and also that this LNG will become the next generation energy source. Am I right?

Yes, you are right. At present, there are many POSCO’s customers engaging in the LNG industry, ranging from LNG vessels, LNG tanks, to LNG equipment. And they strongly insist that LNG will become the next ‘major’ energy source. In fact, the International Energy Agency (IEA) announced that, in the future, LNG will overtake coal as the second dominant energy source following crude oil. In 2019, the global demand for LNG reached 359 million tons, a 12.5% increase compared to 2018, and some predict that it will increase to 700 million tons by 2040.

What is the reason for all this?

What matters are environment and safety. These days, we are slowly getting rid of products and technology that aren’t eco-friendly. Coal and crude oil — the most commonly used energy sources — are fossil fuels and emit fine dust (PM 2.5), sulfur oxides (SOx), and nitrogen oxide (NOx) when utilized. Hence, both energy sources are far from being eco-friendly. In the case of nuclear power plants, safety became an issue after the Fukushima nuclear disaster. Of course, there are other renewable energies like wind and solar power, but they are still insufficient to replace fossil fuels entirely.
In the case of LNG, dust, sulfur, and nitrogen are removed during the liquefaction process, so when it is burned, pollutants can be significantly reduced compared to other fossil fuels. It is also lighter than air, so in case of a leakage, it can be blown away easily. The chances of an explosion are also low since its ignition temperature is high. Those are the reasons why LNG has been spotlighted these days.

l LNG, How Helpful Is It to the Environment?

I heard that demand for LNG-powered vessels has increased dramatically in the shipping industry because of the new regulations issued by the International Maritime Organization (IMO) 2020. I guess that is why?

You know that EV, hydrogen cars, and hybrid vehicles are popular these days, right? But did you know that the amount of SO2 emitted by the top 15 large vessels adds up to more than all vehicles combined worldwide? No wonder why the transition from bunker fuel-powered vessels to LNG-powered vessels is in progress.

Then can you compare the environmental impact of LNG-powered vessels and bunker fuel-powered vessels? I want to check whether LNG is indeed eco-friendly.

OK! Let’s take the ‘Green Iris’ vessel, propelled by LNG, as a model vessel and compare the two following cases: a) when operated on LNG with a fuel tank made of 9% nickel steel, high manganese steel, and b) when operated on conventional bunker fuel with a fuel tank made of regular steel plate.
Let’s suppose that the vessel takes a round trip from Busan Port to the Port of Singapore once a month for 25 years. The environmental impacts include not just the operation period but the manufacturing stage with 9% nickel steel, high manganese steel, and regular steel plate as well. Setting the conventional bunker fuel as 100%, let’s take a look at the level of acidification, global warming, and resource consumption of LNG. 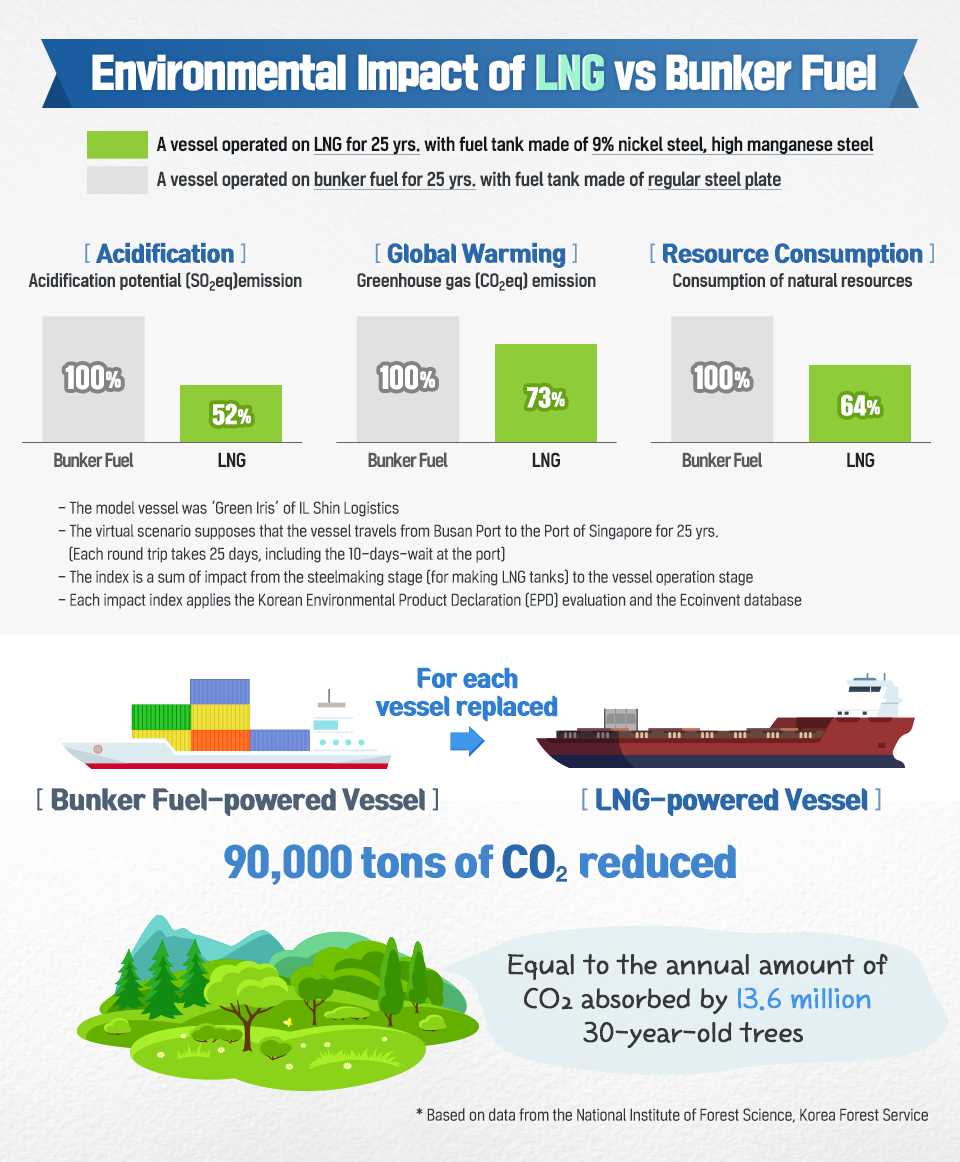 Wow. The acidification effect of LNG-powered vessels is almost halved compared to that of bunker fuel-powered vessels. While the level of global warming and resource consumption goes down to 73% and 64%, respectively.

Can you see how beneficial it is to use LNG in the long run? The main reason why regulation was enforced on bunker fuel is because of SOx, and, in LNG, the amount of SO2eq emission — including SOx — is slashed to 630 tons, the half of 1,220 tons emitted by the bunker fuel scenario’s.

What? 13.6 million trees? That’s a LOT. Then, what is this resource consumption impact?

l LNG, How Helpful Is It to the Environment?

If LNG is that good, why do we keep using coal and oil until now?

That’s because we lacked the technology to apply it. A downside of LNG is that its liquefaction process, transportation, and storage are quite tricky. Since LNG required enormous investment to create a value chain such as processing and transporting, it did not receive much attention in the past. Natural gas needs to be cooled down to below -163 degrees Celsius to become LNG. And it took quite a long time to develop technologies and materials suitable for this condition.

You mean that we produce the gas in gas fields, liquefy, and use it in liquid form? I heard that the city gas we use is LNG, but isn’t this in gas form?

Well, the supply chain of LNG is quite complicated. First, the natural gas produced at gas fields is shipped to the LNG liquefaction plant via pipeline. Here, the gas is liquefied and formed into LNG. This LNG is then transported with a specialized vessel called an LNG carrier, and when the LNG arrives onshore, it is stored in the LNG storage tanks at the LNG terminal, where it is vaporized into gas once again. Finally, it is sent to power plants or city gas companies through a pipeline.

Wow. I didn’t know that LNG goes through so much before we get to use them. So I guess it requires advanced technology as well?

Yes, it does. The core technology is about tank design. And among other things, the material would be the most crucial part. The first LNG plant to be built on a commercial scale was the Cleveland plant in the U.S. in 1941. However, the plant was shut down in 1944 due to the destruction of the LNG tank during operation. The material used in making the LNG tank was known to be vulnerable to low temperatures, and it was one of the reasons why the LNG tank was damaged.

I guess research on LNG tank materials wasn’t active back then. So we need a material that is strong enough to be used at very low temperatures.

When you apply force to an object, it withstands to a limit, deforms, and eventually breaks. Most materials become weaker at low temperatures. You must have seen that when an object quickly freezes, it tends to break easily. When LNG is unloaded and stored, its temperature changes rapidly — ranging from room temperature to below -163 degrees Celsius. And of course, the LNG tank should be able to withstand such dramatic temperature changes. Also, the material should have excellent machinability and be cost-efficient so that it can be fabricated into the desired structure.

Then we cannot use normal steel to make LNG tanks, right? What should we use then?

This is where POSCO’s steel solution steps in! Let me introduce you to the details from now on.