Going to Europe starting in Busan and going through Russia will become a reality in the near future.

The Korea consortium formed between POSCO, Hyundai Merchant Marine (HMM), and the Korean Railway (“Korail”) signed an MOU with Russian Railways on November 13th at the Blue House with the presidents of Korea and Russia in attendance, to cooperate in the railway, logistics, and port fields.

This was a development based on the Eurasia initiative President Park Geun-hye proposed to President Vladimir Putin at the G20 Summit in September where private companies lead the project, and is expected to contribute to developing Korea-Russia relations as well as open the growth plates for the newly rising Northeast Asia region. 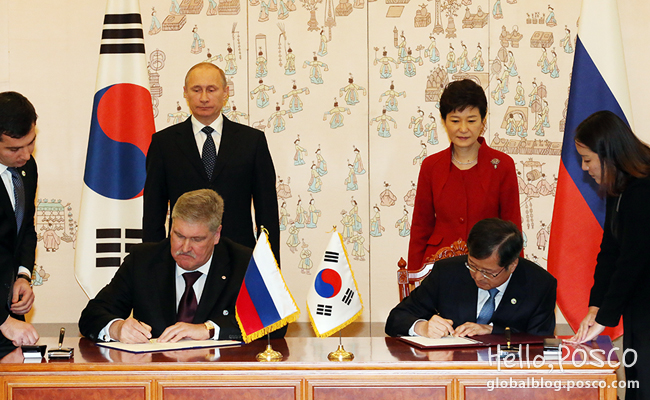 The Najin-Khasan project, which is at the core of the cooperation, was established by Russia for railway construction and port development in North Korea’s Najin and Russia’s Khasan regions.

Korean companies attempted to participate by establishing a joint logistics company back in 2007, but it did not work out at the time. With little development following, Russian Railways sought to enter the Far East region at the end of 2011, and contacted POSCO for possible participation to re-start talks on the project. POSCO evaluated the development potential of the Far Eastern and Siberian regions highly, and concluded that linking logistic lines was crucial to securing a stable material route and reviewed participation in the project.

POSCO also, for a larger frame business of linking the Eurasia logistics route in the long-term, determined that a domestic company with specialties was necessary, and formed a consortium with Korail in the railways field and Hyundai Merchant Marine in the logistics field for joint participation. 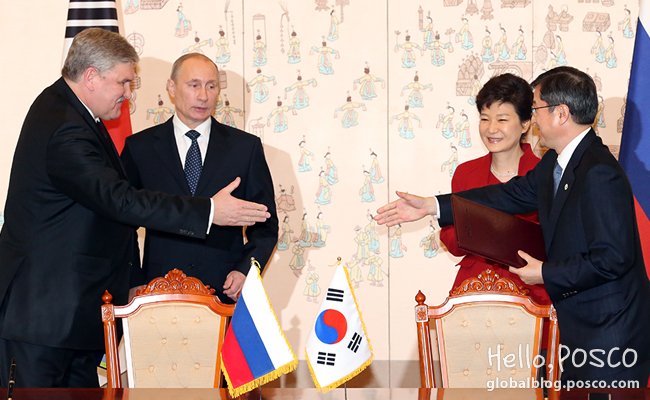 The project will be carried out in two phases. The first phase will focus on the North Korea-Russia joint venture RasonConTrans led railways connection, port and terminal development, and operation between Najin and Khasan. The second phase will expand the project to linking the TKR (Trans Korean Railway) and the TSR (Trans Siberia Railway) considering political and economic situations.

Economic advantages will exist once the second phase of the project linking the TKR and the TSR is completed, as cargo from the Asia region can be transported to Europe through the Eurasia line at approximately one-third the distance and less than half the original delivery time.

From the perspective of POSCO, which is participating in the consortium, more than 2 million tons of resources are imported through Far East ports, but if the project is carried out smoothly, logistical stability can greatly improve and Korail can directly benefit from the TKR-TSR linked project. Hyundai Merchant Marine can also secure an advantage in expanding business in the region by establishing a complex logistics network. POSCO and Hyundai Group especially are constructing an international logistics complex in the Hunchun region which is contiguous to North Korea, China, and Russia, and thus expect great synergy once the Najin-Khasan project gets on track.

Meanwhile, experts have determined that this project can have greater power of execution and stability with the participation of POSCO in the resource/infrastructure field, Korail in the railways field, and Hyundai Merchant Marine in the logistics field, all specialized companies in each field.

The Korean consortium consisting of POSCO, Hyundai Merchant Marine, and Korail will thoroughly review profitability through economic feasibility analysis, and will also have close discussions with the government and project partners from a future-oriented perspective to have Korea contribute to leading Eurasia economic consolidation.