2020/11/20
‘Eco-friendly’ would be a milestone that all — from individuals to corporates — encounter. POSCO’s GPS (Green POSCO Solution) is also on its way towards a greener future. POSCO Newsroom presents a special series in the name of GPS, covering the story of how POSCO is leading our daily lives to become more eco-friendly.

I didn’t know that LNG was such an eco-friendly energy source. As you mentioned, various technology developments are needed to use LNG better. Then, what is POSCO’s solution for the LNG industry?

First, let me introduce POSCO’s lineup of steel materials for low temperature and cryogenic applications. At POSCO, there is a trio fit for the purpose: 9% nickel steel, high manganese steel, and STS304L. Let’s see each one of them in detail. 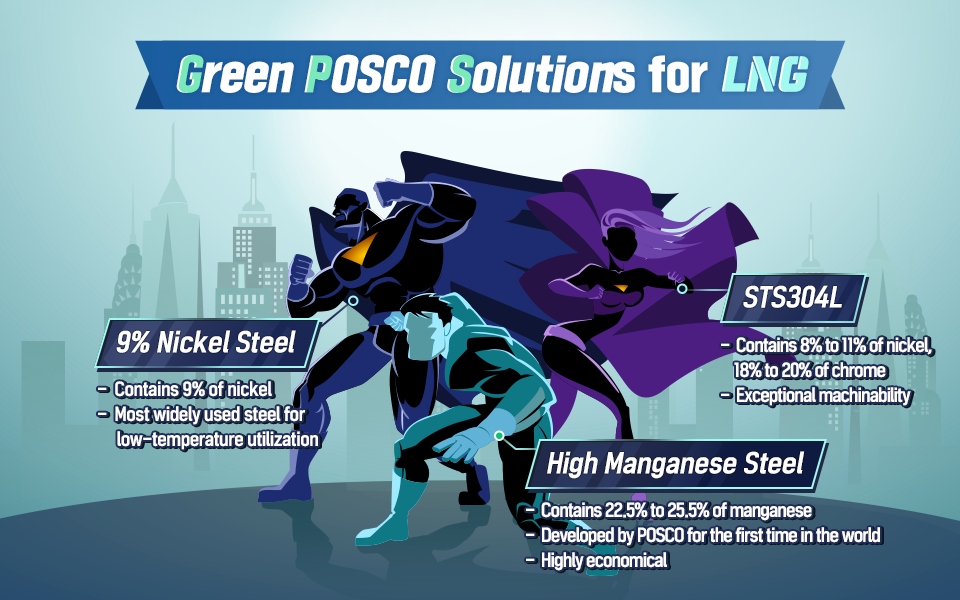 Exactly. 9% nickel steel is the most widely used steel for cryogenic application. This is because nickel maintains outstanding strength and toughness even at extremely low temperatures. 9% nickel steel was first developed by an American company, INCO, in 1944, and its safety was proven through model testing in 1960. Since then, it has been widely used as a material for storage tanks of extremely low-temperature use. However, nickel has a downside: it is expensive, and its supply and demand are unstable.
In addition, 9% nickel steel could only be produced by few steelmakers in the past, so domestic shipbuilders had to depend on imports. Fortunately, POSCO succeeded in developing it for the first time in 1993, and after quality stabilization, production for the material has been accelerated from 2007. Recently, POSCO has been in active cooperation with the Big 3 shipbuilders in Korea — Hyundai Heavy Industries, Daewoo Shipbuilding & Marine Engineering (DSME), and Samsung Heavy Industries — to develop their own technology for LNG storage tanks using this material.

High manganese steel? Is it steel with a lot of manganese?

You’re right. POSCO started developing high manganese steel for cryogenic application in 2010, and in 2013, succeeded in creating the new material for the first time in the world. The steel contains 22.5 to 25.5% manganese and is not easily damaged even at minus196 degrees Celsius. Unlike conventional carbon steel, which breaks under very low temperatures, high manganese steel can withstand such a harsh condition.

What’s the difference from 9% nickel steel?

Both steel products are applicable to extremely low temperatures, but they have a huge difference: cost competitiveness. Compared to nickel, manganese is more economical and has a stable supply and demand system, thanks to its abundant reserves. The cost of material is about 30% more economical for high manganese steel than 9% nickel steel, and the cost of welding is also much lower as well. Both 9% nickel steel and stainless steel are excellent steel materials for constructing LNG tanks. But since they were quite costly, POSCO developed high manganese steel as an alternative solution to the problem.
According to the regulations of the International Maritime Organization (IMO), only nickel alloy steel, stainless steel, 9% nickel steel, and aluminum alloy steel were permitted to be used as cryogenic materials for LNG tanks on board an LNG carrier. However, in 2018, high manganese steel also received official approval, which shows international recognition of POSCO’s technical excellence.

Stainless steel contains nickel as well. 304 means that the stainless steel is “austenitic” at room temperature, and L means that it has low carbon content — under 0.03%. Stainless steel is much more machinable compared to 9% nickel steel and high manganese steel, so it is widely used in thick steel pipes and machinery of LNG plants. However, there are needs from certain clients who wish to use stainless steel for LNG tanks, so POSCO continues to develop technology and provide solutions regarding this steel.

Wow. POSCO developed a new steel product for the LNG industry? That’s amazing. I wouldn’t have imagined that the city gas I use at home was related to POSCO.

Right. But the real solution story hasn’t begun yet. Of course developing a new steel product is significant, but making sure that it is adopted and utilized by clients is much more important. POSCO has been involved in the R&D of LNG tanks with clients for many years so as to make LNG more economical and safer for us. Now let’s talk about our remarkable achievements.

Among 9% nickel steel, high manganese steel, and STS304L, POSCO’s clients may choose the optimal steel product according to the specifications of the LNG tanks they build. And POSCO provides the best solutions accordingly — regardless of which product it is. 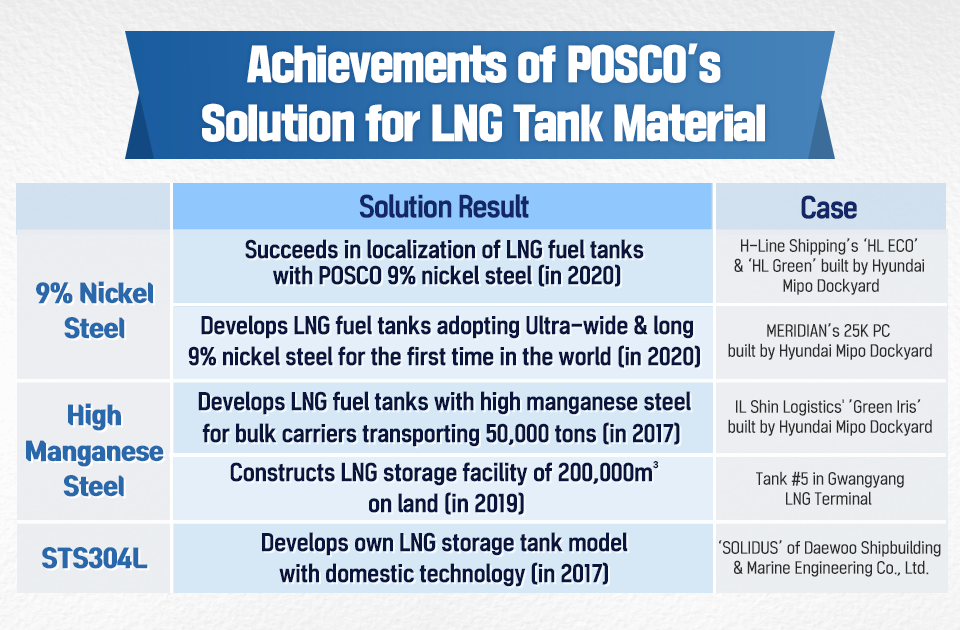 Following a long period of research, vessels with LNG fuel tanks adopting POSCO 9% nickel steel are finally being constructed. They are none other than ‘HL ECO’ and ‘HL Green’ of Hyundai Samho Heavy Industries. Both vessels are 180,000-ton LNG-powered bulk carriers where POSCO’s 9% nickel steel is applied as materials for their fuel tanks. At the end of this year, both vessels will be delivered to the shipowner, H-Line Shipping. Other than the fuel tanks, POSCO steel plates were used in the body of the ships as well. Put differently, these vessels are the achievements of full localization — from materials to fuel tank technology. And here is another special solution from POSCO. POSCO can produce 9% nickel steel of all thicknesses required for LNG tank production and also “ultra-wide & long” nickel steel as well!

Ultra-wide & long? What’s so special about that?

LNG tank producers manufacture the tanks with 9% nickel steel in flat form and weld them piece by piece to build the tank. However, welding is costly and takes a long time, which has a significant impact on the overall process. So, the issue for POSCO clients was this: ‘How do we reduce the number of weldings?’ Also, the welding material for 9% nickel steel is especially more expensive than conventional steel. That’s why POSCO developed large-sized products to reduce welding points and costs. 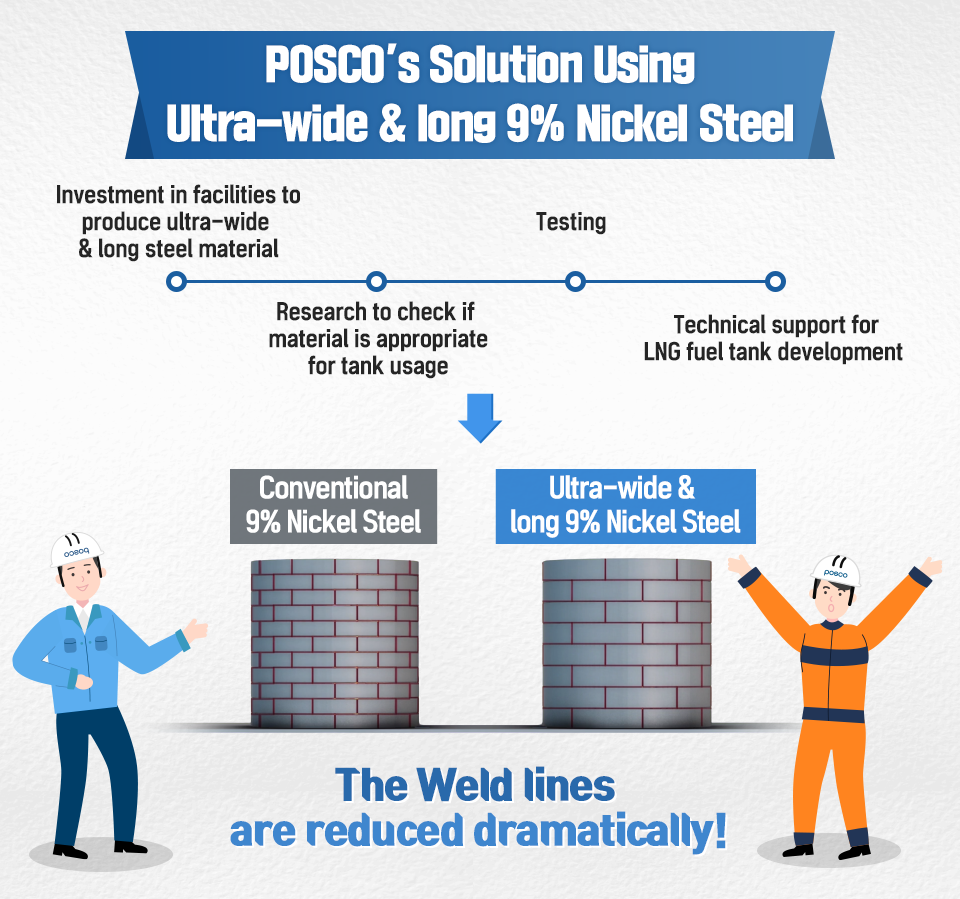 POSCO currently produces the world’s largest 9% nickel steel for shipbuilding. After six months of R&D, POSCO established a system to produce a product of up to 4.3m x 20m, which previously was limited to 3.85m x 15m. POSCO’s own R&D was important, but what mattered more were the many tasks and regulations to be resolved so as to apply this product in the actual field. So POSCO proactively discussed the quality of nickel steel with the British LR (LLOYD’S REGISTER OF SHIPPING) classification and based on the result, carried out the tank design, structural feasibility review, and performance testing with Hyundai Mipo Dockyard. The COVID-19 pandemic almost precluded the joint research, but POSCO installed a conference calling system for the client and continued cooperation. As a result, the first batch of ultra-wide & long 9% nickel steel could be supplied successfully to Hyundai Mipo Dockyard in April!

So those LNG tanks must be under production now.

POSCO’s ultra-wide & long 9% nickel steel is used in producing LNG fuel tanks for Hyundai Mipo Dockyard’s 25,000-ton DWT carrier for petrochemicals. This carrier is equipped with a dual-fuel engine that can utilize both bunker fuel and LNG. It is like a hybrid car at sea. The vessel will be completed in March next year and delivered to the ship owner, Bermuda’s MERIDIAN.

I’ve heard that Korea is an LNG carrier powerhouse. I also heard that Korean shipbuilders received orders for 118 out of 124 LNG-powered vessels from shipping companies around the world in the last three years — from 2017 to 2019. Now with these LNG tank materials and technology, Korea’s competitiveness is bound to become stronger!

You’re right. POSCO is looking for ways to keep growing together with SMEs who are producing LNG tanks as well as major shipbuilding companies. To help SMEs overcome the long-term recession in the shipbuilding industry, POSCO is providing them with the application technology of 9% nickel steel and high manganese steel on LNG fuel tanks free of charge. POSCO shares processing and welding technologies of 9% nickel steel and high manganese steel and invites global shipping companies to promote the products by SMEs in Korea. Thus, a stable industrial ecosystem where the mill, SMEs, and shipbuilding companies work jointly is created.

So you said that high manganese steel is a new product developed by POSCO, right? Then its application technology must have been developed from scratch.

Since high manganese steel was not a certified material in the LNG industry, it could not be applied to commercial projects in the beginning. So, POSCO worked on getting the material approval first, starting from the Korean Industrial Standard (KS) in 2014 to the American Society for Testing and Materials (ASTM) in 2017 and the International Organization for Standardization (ISO) in 2018, respectively. The first case of high manganese steel applied successfully to LNG tanks is “Green Iris,” Korea’s first eco-friendly LNG-powered vessel, built in 2017. This vessel was built jointly by POSCO and Hyundai Mipo Dockyard and was spotlighted since it was the “world’s largest” LNG-powered bulk carrier that adopts POSCO-developed high manganese steel for the “first time in the world”. Currently, the vessel is in operation on the sea, transporting limestone from Gangwon Province to Gwangyang Works.

So LNG tanks made of high manganese steel are already being used? The progress has been made rapidly!

▲ POSCO high manganese steel was applied to the LNG fuel tank of Green Iris (left) and the tank No. #5 at Gwangyang LNG receiving terminal (right)

The cooperation between POSCO and its clients is bearing fruit. It seems that POSCO has succeeded in capturing eco-friendliness and technical competitiveness at once! Will there be more to expect?

POSCO is participating in a study to construct the 6th LNG storage tank at Gwangyang LNG receiving terminal by upgrading its high manganese steel technology. The company also plans to utilize the technology for overseas projects once the international design code has been revised. Recently, a major European oil company that reviewed the application of high manganese steel showed a favorable response for its competitiveness at “Gastech 2020,” an international gas conference. In addition, POSCO is joining forces with its clients so that 9% nickel steel and STS304L can also be the key to the development of LNG tank technology.