The overcapacity in the Chinese steel market, the decrease in working-age populations, and the general decline in steel demand have created challenges in the Northeast Asian steel industry.

POSCO has been ranked as the world’s most competitive steelmaker for seven years in a row. It has remained competitive in part by focusing on its World Premium Products, which offer advanced steel solutions for their customers. POSCO has also put extensive effort into maximizing its non-steel technologies and products to find new growth in non-steel sectors. In addition, POSCO has been a leader in innovating its own manufacturing processes, incorporating advanced AI and IoT technologies into its smart factories. POSCO has also remained committed to not only growing its non-steel secondary businesses, but advancing upon existing technologies to create new and eco-friendly production methods.  Below we take a closer look at how POSCO has continued its work to innovate and stay competitive.

Amid the rising demand for rechargeable lithium-ion batteries used in smartphones, laptops, and electric vehicles, POSCO has been working on proprietary technology for lithium extraction. Earlier this year, POSCO opened Korea’s first lithium plant, PosLX, and commercialized the production of lithium carbonate from rechargeable batteries after 7 years of development.

The PosLX Plant is expected to produce 2,500 tons of lithium carbonate per year using a new eco-friendly technology, which is enough to manufacture about 70 million laptop batteries. This output will supply POSCO’s battery making partners LG Chem and Samsung SDI, as well as POSCO ESM, a subsidiary that produces cathodes for secondary batteries. 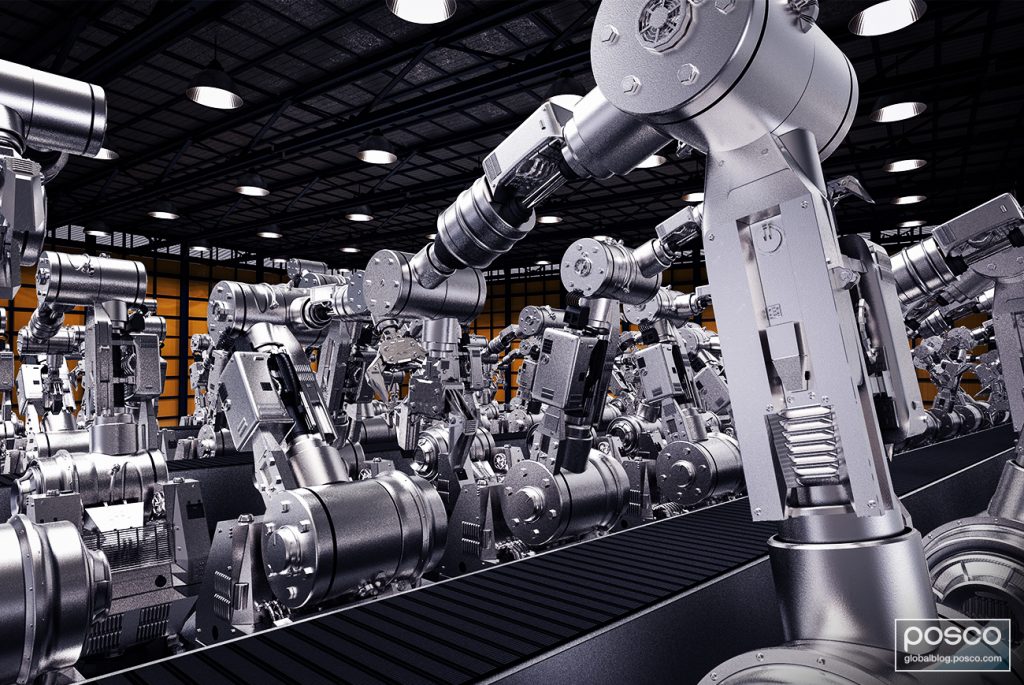 Smart factories operate autonomously as the machines talk to each other through sensors – reducing faulty products and waste.

In particular, the ‘Smart Solution for Coating Weight Control Based on AI‘ technology uses an automated control technology that predicts the coating weight in real time and accurately meets the target coating weight. When coating weight is controlled manually, quality deviates depending on the skill level of the worker, which inevitably results in significant amounts of wasted zinc. However, when it is automatically controlled by AI, the quality of POSCO’s automotive coated steel can be enhanced while production costs are decreased. These new automated processes have also helped increase work efficiency and productivity with workers.

Faced with sluggish growth due to the oversupply from China and a decline in steel demand, POSCO has been looking to expand sales in new markets. In a bid to become the world’s largest steel provider for automobiles, POSCO completed its Thailand CGL (Continuous Galvanizing Line) in 2016. The plant has an annual production capacity of 450,000 tons and incorporates some of the most advanced AI technologies in its smart factory system.

In addition to being one of the strongest automotive production bases in Asia, Thailand is also the center of the consumer-electronics industry in Southeast Asia.

With the newly established automotive steel plate plant in Thailand, POSCO’s global volume will reach over 9 million tons in 2017 and more than 10 million tons per year starting in 2018. The automotive steel sheets manufactured by the facility will be supplied to global auto parts companies and carmakers operating in Thailand including Toyota, Nissan, and Ford. Despite the increase in competition from other steelmakers, POSCO aims to become a market leader through building strategic partnerships with global automakers operating in the country.

Unlike conventional flooring that uses non-steel materials such as styrofoam insulators and rubber buffer materials, POSCO’s floor plates are developed by combining high Mn steel Z clips – a material that is 4 times more vibration-resistant than general steel – giving it the ability to reduce noise between floors. PosCozy is able to reduce the sound of typical walking from 50dB to just 40dB, while impact sounds are lowered from 58dB to 38dB.

PosCozy is the world’s first high manganese steel floor plate with top quality floor noise reduction. It is also the first flooring system to receive the highest rating in sound insulation from Korea’s industrial rating agency.  Due to its unique and superior qualities, PosCozy won the prestigious Jang Young Sil Award in 2016.

Due to the rising number of shipbuilding orders for large-sized liquefied natural gas (LNG) carriers, there has been a shortage of nickel,  requiring new and innovative solutions to construct LNG-fueled ships. In order to address these issues, POSCO developed a new type of high-performance manganese steel and announced in 2016 that it would be applied to the LNG-fueled bulk carrier built by Hyundai Mipo Dockyard.

It is the first time a bulk carrier will have been constructed to include an LNG-fueled system and a fuel tank made of high manganese steel.  Its higher strength, ability to withstand an extremely low temperature (-162℃), and cost competitiveness make it superior to the nickel and aluminum alloys that are typically used in tanks. The ship, which will be the world’s largest LNG-fueled bulk carrier, is expected to have a capacity of 50,000 tons, seven times more than previous ships.

POSCO has been able to overcome immense barriers, from the nickel scarcity in the LNG market to the oversupply of steel from China. POSCO strives to be a pioneer across all industries with its innovative products and will continue to do so in the years to come.