Asia accounts for more than 65% of total global steel use. Its populations and economies continue to rise; however, structural changes in society and the market as a whole are forcing the industry to recalibrate.  In Northeast Asia, the oversupply of steel, the aging of the workplace populations, and the deceleration of the Chinese economy are all having a significant impact on the steel industry.

To combat these issues, each country is expanding into the global market with differentiated export strategies in order to increase their shares. China is diversifying export items and destinations for its bulk supply of steel products. Japan & Korea are moving forward with investment in high-quality steel production, and Korea is also gearing up to meet demand through overseas downstream investments in Southeast Asia, Mexico, USA, and India. In addition, in order to stay competitive, companies are adapting to the technological changes of the Fourth Industrial Revolution – integrating AI, IoT, and smart factory solutions to create stronger products. 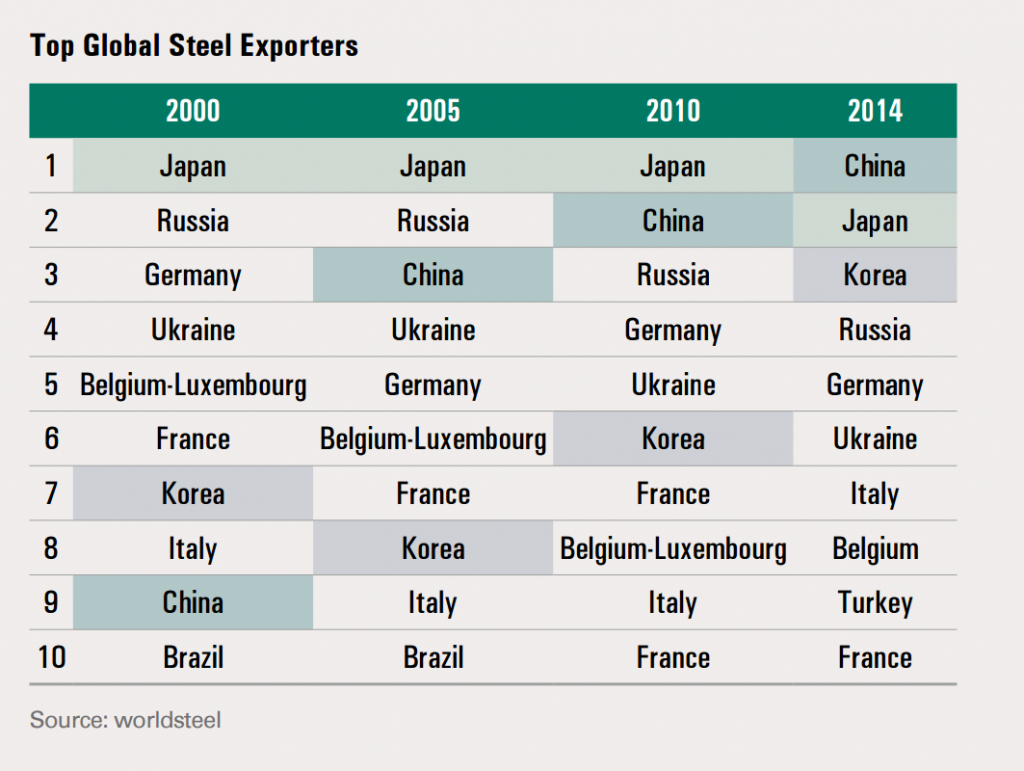 Following the rise of China, the global steel trade market entered a period of structural transition in the 2000s. China used to be a net importer of steel and a “key market” for global steelmakers, but they have now become its leading producer. (Data courtesy of World Steel Association)

Below we outline some of the problems facing the Northeast Asian region and what they are doing to overcome them and remain competitive among these changing conditions of the last two decades.

Capacity of  the Chinese Steel Market

Roughly half of all steel production takes place in China. China’s rapid economic growth created conditions that led to the increased development of its steel industry, many of which were led through policy-driven investments by the Chinese government. From 1990 to 2016, the Chinese government introduced more than 320 policies and measures to regulate the steel industry. Of these, nearly half (49%) were issued to control the capacity of steel expansion. Despite recent capacity-related policies being introduced by the State Council, some industry observers doubt the potential of their effectiveness, which calls for a 100-150 Mt capacity reduction by 2020.

Edwin Basson, Director General of World Steel Association, believes that China reached peak steel at a rather earlier stage of its economic development compared with the experiences of other developed economies as it has accomplished a very condensed development in a relatively short time period. China is now seeing decreased demand for steel despite maintaining a high 6% GDP growth rate. Basson noted, “the largest and most difficult [challenge facing China] is probably the rebalancing between investment and consumption in the economy.” Because steel is so intricately integrated with all other parts of the economy, structural changes are forcing the steel industry to change as well. What has been a predominantly investment-led system is now shifting to a demand-led system.

Frank Zhong, from the Beijing office of the World Steel Association, recommended six directions for the Chinese government to take in its restructuring of the domestic steel market (download PDF).

Because China seems to have already reached peak capacity, we should expect to see long term decline. While some markets have been able to recover to peak periods after the decline (see Germany and Japan), it is difficult to see how China recovers to its 2013 peak levels. However, the future development of Western China, the continued capability of China as a competitive manufacturing base, and its geographical location could contribute to renewed growth in steel demand.

Reducing excess capacity is not an easy task, largely because of the many hidden barriers. Capacity reduction can have a significant impact on the balance sheets of operating companies and are never popular with investors. With the determination of the current government to tackle overcapacity and environmental protection, China has publically announced a reduction of up to 150 million tons over a five year period.

World Steel Association members have urged that restructuring takes place based on fair and similar principles across all markets. Member groups recently agreed to the following principles:

Because China represents such a large portion of the global market, any increase or reduction in capacity will have major implications for other countries. Finding a solution to China’s overcapacity is critical to the sustainability of the industry in the region and other nations have been pushing for decreased capacity.

Japan has been pushing for lower production volume out of China – especially as demand has peaked. In Korea’s case, China’s production capacity has forced steel manufacturers into business and financial restructuring due to slowed growth. In order to set themselves apart, companies like POSCO have refined their product line-up to offer more advanced, customized solutions that cannot be provided by high volume producing competitors.

Despite pledges to cut steel capacity, recent reports from the Financial Times suggested that China’s capacity actually rose in 2016.

The global steel export market is riding a wave of change in the face of surprisingly high growth in the Chinese steel industry. Japan used to be the world’s top steel exporting country, but it was overtaken by China in 2006. (Data courtesy of World Steel Association)

Learning lessons from advanced countries about the experience of aging populations, below are some shared characteristics:

The decrease in working-age populations in Korea, China, and Japan, which have led the growth of the global steel industry, are expected to have a negative impact on global steel demand in the medium to long term. While demand is expected to increase in the ASEAN region and in India, it is unlikely that they will grow fast enough to offset the decline in steel demand in the three East Asian countries.

To confront this structural shift, steelmakers must begin to improve upon their already advanced products. Aging populations have less total demand, so competition from the steel manufacturers will likely come through the technological advancement and customized solutions being seen in the Fourth Industrial Revolution.

Influence of the Fourth Industrial Revolution on the Steel Industry

As Northeast Asia faces many structural changes that are having a depressive impact on the steel industry, they are taking the necessary steps to stay ahead. The region has long been a leader in technological adaptation and product innovation. Recent efforts to produce higher-value, customized steel have also coincided with improvements in the production processes.

The industry is already extremely efficient in iron and steel making, as well as processing. Within this environment, the Fourth Industrial Revolution could continue to play an important role. It is unclear how much progress will be made as the industry has already achieved a relatively high level of technological advancement. Companies like POSCO are introducing technology to create smart factories that streamline production, reduce waste, and increase safety.

In China, their “Made in China 2025” and “Internet Plus” initiatives plan to integrate mobile, cloud computing, big data and the IoT with manufacturing – all in order to help develop e-commerce, industry networks and the international presence of Chinese companies. In Japan, their “New Robot Strategy” is being developed to position Japan as a robotics superpower in order to create streamlined and automated systems.

POSCO is working to build steel plants that can sense, analyze, and control its conditions, just as a human can feel, think, and respond. POSCO’s smart factory project, currently taking place at Gwangyang plate plant, will gradually be extended to all production areas.

In addition, apart from making advancements in the actual production of steel, it is expected that the industry will have a stronger indirect influence through changing the manufacturing process and product design of items requiring steel as an input.

With its Smart Factory, POSCO is able to identify any defects during the production process prior to the final stages of the operation.

Economic, demographic, and structural shifts are having long term effects on the steel industry in the Northeast Asian region. As the largest global producer, China’s steel production capacity and efforts to curb its oversupply affect not only investors in China but also steel makers in every other region around the world. Also, due to a slowing economy and aging population, regional demand is expected to experience an extended decline in the coming years.

To offset these negative impacts, technological advances continue to define the industry as companies like POSCO introduce AI into their smart factory systems. These advancements have led to improvements in quality, reduction in waste, and increased safety for workers. As the Fourth Industrial Revolution expands, steel companies must adapt in order to face the pressures facing the industry as a whole.