How Smart Factories are Changing the Manufacturing Industry

Connectivity, Artificial Intelligence (AI), the Internet of Things (IoT) – we hear about these concepts every day and how they will change our lives. Our smartphones, thermostats, and lights can all be connected to read our movements and our environments, and while these advancements are remarkable, the advancements in factories and production lines are likely to have the greatest economic impact on our lives.

We are entering a new era of manufacturing, one in which computers and machines are coming together to perform automated actions. Even more impressive, they are able to do this with less and less human involvement, learning from their mistakes and teaching themselves to constantly perform better. 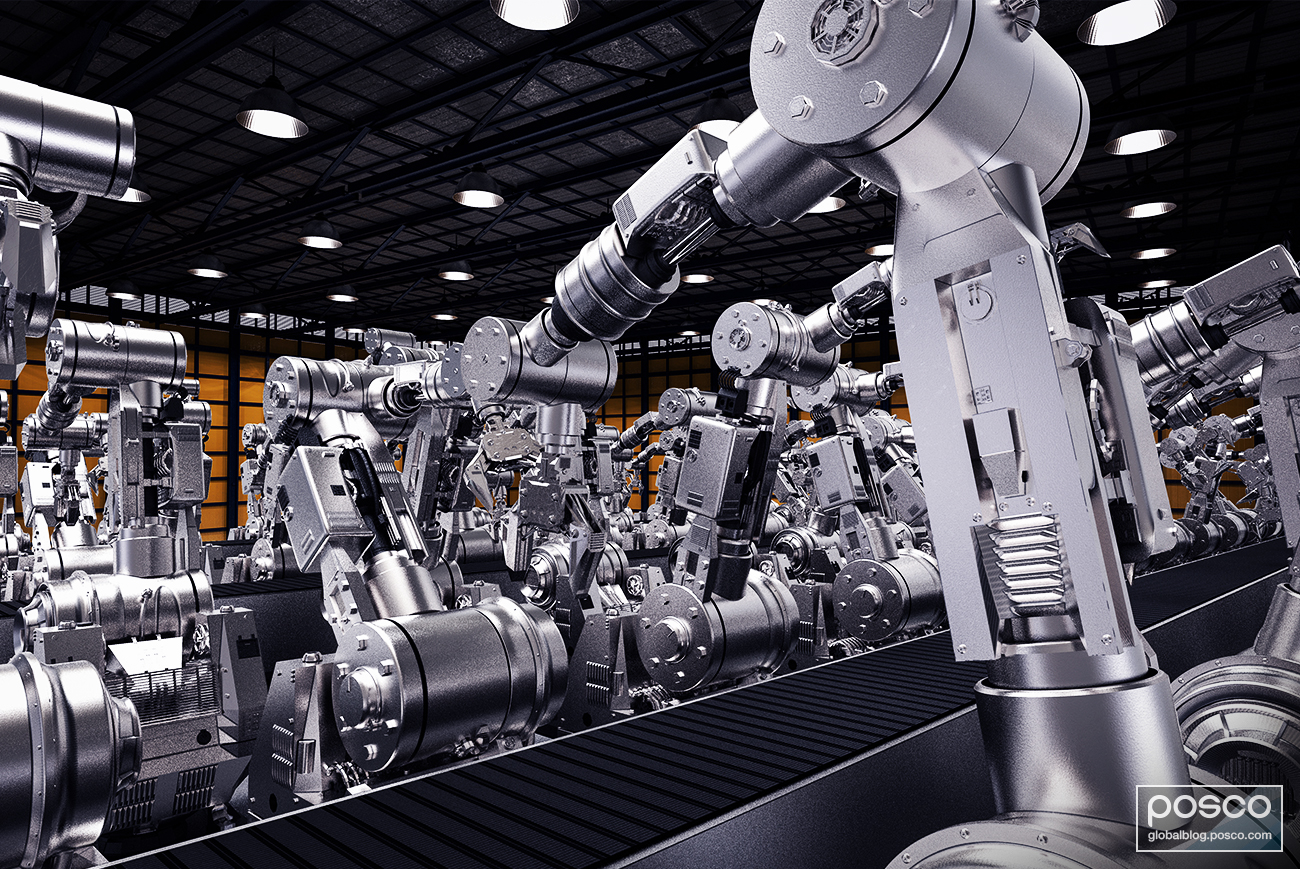 Smart factories operate autonomously as the machines talk to each other through sensors – reducing faulty products and waste.

This new era, what is being called Industry 4.0, is one in which manufacturing moves beyond some of its former limitations by becoming more efficient, less wasteful, and much more productive. Corporations like Siemens, BASF, GE, and POSCO are leading the way by designing smart factories connected through IoT technology and artificial intelligence that produce higher quality products with less waste.

Industry 4.0 and the Smart Factory

The First Industrial Revolution marked the movement from pure human labor to using machines. Steam engines also appeared helping move things along further and more quickly. Next came electricity, and with it, mass production. The Third Industrial Revolution saw the rise of computers, more automation, and the replacement of some human labor. Now, we are entering the Fourth Industrial Revolution, or Industry 4.0, in which these machines interact and learn from each other with little to no human interference.

With Industry 4.0 we are seeing the smart factory. A smart factory is a physical manufacturing system connected by AI, IoT, and tons of data in the cloud that teach the systems to work by themselves and make improvements without human involvement.

Bernard Marr says that for a factory to be considered Industry 4.0, it must include:

In the examples below, we can see how three corporations are bringing these pieces together to advance smart factory production. Siemens, GE, and BASF have all utilized this technology to build a more efficient production system, and POSCO is doing the same in its steel production line.

The Siemens AG plant in Amberg, Germany, is unique in that it not only produces automated machines to be used in other industrial factories, but that it does so using fully automated machines in its fully connected smart factory. With over 1,000 manufacturing units connected via the web across 100,000 square feet, each step of the manufacturing process is automated and programmed to make customized products immediately.

The plant, established in 1989, is currently operated with around 1,200 employees and about 75% of operations are automated. The plant manufactures more than 12 million programmable logic controls (PLCs) that are used to automate cruise ships, automobile production lines, and ski lifts to name a few. With production quality at an impressive 99.99885%, an inspector would be hard pressed to find any defective products.

While Siemens has largely automated the production process, workers are still needed in the beginning to place the circuit board on the production line and supervise it through its production cycle. Producing more than 1,000 product variants for over 60,000 customers worldwide, Siemens has developed a model smart factory with automated systems creating nearly perfect products with less waste.

At BASF, the chemical giant incorporated a smart factory system so that it could manufacture fully customizable soaps and shampoos. When an order is placed, the automated factory line adjusts its protocols to make the unique product and packaging that was ordered by the customer. The set up is automatic and the quality is near perfect.

At its smart pilot plant in Kaiserslautern, Germany, once an order is placed for a personally customized soap or shampoo, radio-frequency ID tags that are attached to the soap containers send out wireless signals. These wireless signals tell the machines on the production line about the customized order.

The setup and manufacturing process is automated, exact, and with near perfect quality control.

At GE’s Advanced Manufacturing Works in Greenville, South Carolina, engineers are working on new ways to streamline smart factories using AI and IoT technology. This $75 million plant sits next to where GE makes the world’s largest gas turbines – products manufactured on a huge scale with incredibly intricate pieces. They have introduced smart factory systems into this factory and are working to provide more to its other plants around the globe.

Staffed with 80 engineers, PhDs, and machinists with decades of experience – they will use the Advanced Manufacturing Works to try new manufacturing and design ideas in order to streamline the production processes of other factories.

POSCO CEO Ohjoon Kwon recently visited Siemens and GE to compare their work in smart factory systems with POSCO’s. All three of them are working on vastly different products; however, the ideas behind the technology are similar.

At POSCO’s Gwangyang Works, they have installed a data integration infrastructure that encompasses all of its operations and facilities. This technology uses an automated control technology that predicts the coating weight of zinc in automotive steel in real time to precisely control the Continuous Galvanizing Line (CGL), the primary technology used in automotive steel sheet production. In combination with the coating weight system, they have also created a data pre-analysis system that can preemptively detect abnormalities.

Coating weight control is a highly-sophisticated technology that keeps the thickness of the coating layer consistent – even when operating conditions change suddenly. When coating weight is controlled manually, quality deviates depending on the skill level of the worker, inevitably resulting in significant amounts of wasted zinc. However, the plating process is now automatically controlled by artificial intelligence, increasing the quality of POSCO’s automotive coated steel while decreasing production costs.

Also, in order to apply smart technologies more quickly, POSCO Group University is partnering with POSTECH (Pohang University of Science and Technology) to build an AI ecosystem that nurtures AI specialists and fosters advanced research. POSCO Group University will be in charge of launching related training programs POSCO and its subsidiaries, while POSTECH Information Research Laboratories (PIRL) will be in charge of developing content for basic and advanced courses to increase people’s understanding of AI, big data, programming, pattern recognition, machine learning, natural language processing, and computer vision. This partnership will serve as a significant milestone in expanding cooperation between companies and academic institutions, a fitting move in the era of the Fourth Industrial Revolution.

POSCO, Siemens, GE, and BASF are all utilizing the connected technologies of Industry 4.0 to move their industries forward. GE recently estimated there will be over “50 billion connected devices by 2020 and that the Industrial Internet could add $15 trillion to global GDP in productivity gains over the next 20 years.” Despite the industry barriers facing steel companies, POSCO is leading the industry in implementing connected technologies that will help them build the smart factories of the future and remain competitive for years to come.