On April 26, POSCO held the completion ceremony for its No. 7 Continuous Galvanizing Line (7CGL) in Gwangyang. This is the first automotive steel plant built exclusively to produce POSCO GIGA STEEL – an advanced high strength steel with a tensile strength of 1.5GPa (Gigapascal). POSCO GIGA STEEL can withstand more than 100 kg of load per 1mm², meaning that a 150 cm² plate of POSCO GIGA STEEL, approximately the size of a palm, can withstand the load of 1,500 medium cars. POSCO GIGA STEEL falls into one of the strongest categories of steel available to automakers today. In addition, it is more than three times stronger than aluminum and comes with excellent formability, making it possible to manufacture vehicles that are both lightweight and strong.

POSCO invested a total of KRW 255.4 billion and the 7CGL is expected to have an annual production capacity of 500,000 tons. By designing and constructing the plant with its own proprietary technology, POSCO was able to reduce construction costs, thereby securing cost competitiveness for its customers as well. 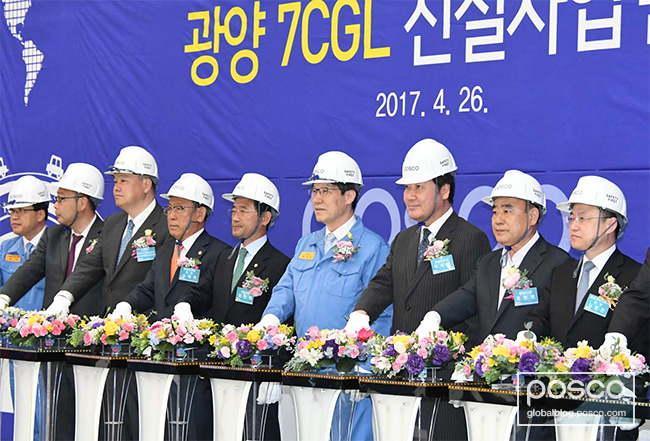 CEO Kwon remarked, “POSCO opens up a new horizon in automotive steel with the completion of the 7CGL. This new line will allow POSCO to continue to provide differentiated products and customized solutions through smart technology.”

The 7CGL is attracting attention as one of the first plants to produce both hot-dip galvannealed (GA) and hot-dip galvanized steel (GI) at 1.5GPa  steel for automobiles. GA steel is preferred by Korean and Japanese automakers because it has excellent coatability and weldability as the coating layer is made of iron and zinc alloy, while GI steel is preferred by European automakers due to its excellent resistance to corrosion.

Previously, GA and GI steel sheets could only be produced at 1.2GPa due to surface and quality problems that occur before and after plating. POSCO resolved these problems by developing the “high hydrogen rapid cooling technology,” which forms high-intensity tissues in steel sheets before plating, and a “rapid cooling system,” which uses rapid cooling to smooth out the plated surface.

With the completion of 7CGL, POSCO now has seven operating CGLs  in Gwangyang, two CGLs in Mexico, and five CGLs in Thailand, India, and China. Through these CGLs, POSCO plans to produce 10 million tons of steel by 2018 and further solidify its status as a global automotive steel maker.