What the Chinese Cruise Market Can Mean for the Shipbuilding Industry

While international shipbuilding, offshore equipment, and related markets are waning, the cruise sector is leading the way for recovery. According to sources, cruise shipbuilding accounted for 43 percent of global new shipbuilding orders.

Nowhere is growth stronger than in China

Unlike in most developed countries, many of China’s younger citizens (25- to 45-year-olds) are able to afford a cruise. According to Cruise Lines International Association’s Senior Vice President of Strategic Marketing and Communications, Lorri Christou, the Asian cruise industry is seeing more travelers than ever. Executive Vice President of the China Cruise and Yacht Industry Association, Zheng Weihand, expects 2.5 million travelers by 2020, 4.5 million by 2025, and seven million by 2030. 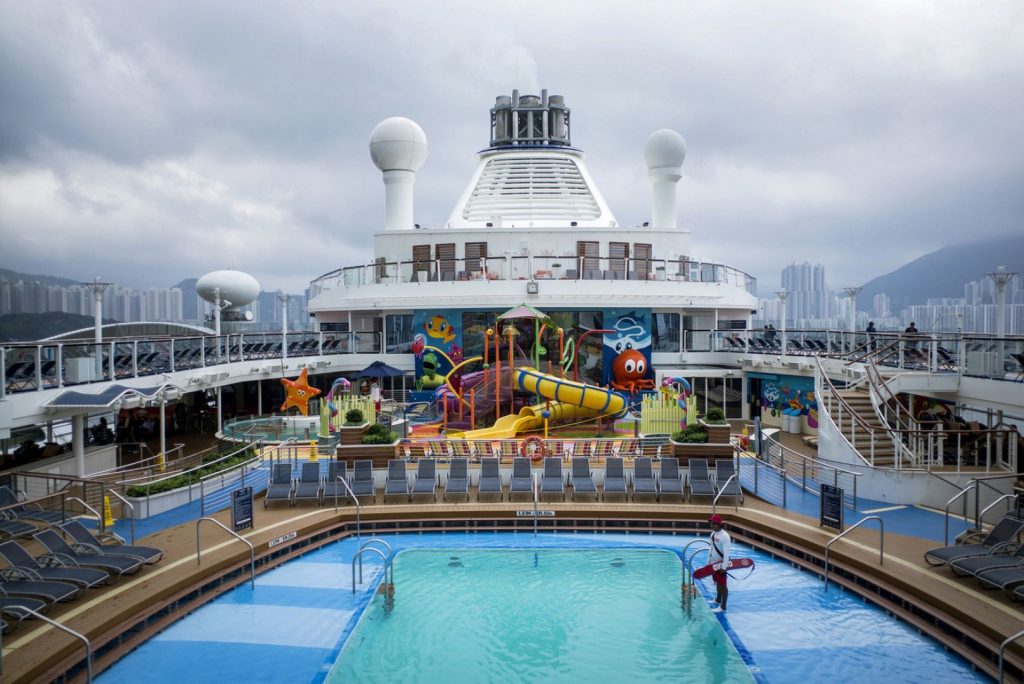 The swimming pool on Royal Caribbean’s Ovation of the Seas cruise ship at the port of Tianjin. (Source: Today Online)

The growing demand is having a positive effect on the Chinese shipbuilding economy as well.

Vice-chairman of the Chinese organizing committee of Marintec China, Fu Chunhong, said that China State Shipbuilding Corp is among a number of Chinese shipbuilders that are proactive in building cruise liners. The Chinese government prioritizes subsidies and development support for the cruise industry, and many ports are upgrading their infrastructure to handle new tonnage and more ships.

With time, China could become the world’s largest cruise market as the middle class in China continues to grow. They are seeking luxury vacation cruises, and this is being encouraged by the Chinese government that supports lenient annual leave policies.

Chinese companies may be ripe for growth due to favorable government policies and financial support, but they still lack in technology in comparison to major players in the global cruise industry such as Carnival Corporation, Royal Caribbean Cruises Ltd. and Norwegian Cruise Line.

Carnival recently marked the start of construction of seven next-generation cruise ships to be fully-powered by LNG. These ships, due between 2018 and 2022, will be the first able to use LNG or 100 percent of their power. This comes after its installation of Exhaust Gas Cleaning Systems (EGCS) on 60 of their existing cruise ships, reflecting the company’s vision for more sustainable business practices.

Carnival Corporation’s deployment in China includes vessels from Princess Cruises, including the Sapphire Princess, a cruise ship built to be based in Shanghai, and the Majestic Princess which was designed as a year-round international luxury vessel specifically tailored to Chinese guests.

Having helped fund two new Royal Caribbean vessels in 2015, KfW IPEX is funding more cruise liners, with 2.8 billion euros in shipping loans earmarked. They are also looking to meet the demand of global passengers, growing at a rate of 4.5 percent per year.

Royal Caribbean is mobilizing its best gear in the Chinese market. Its “Quantum of the Seas,” for example, travels the region year-round, alongside “Ovation of the Seas,” vessels tailored for Chinese passengers. 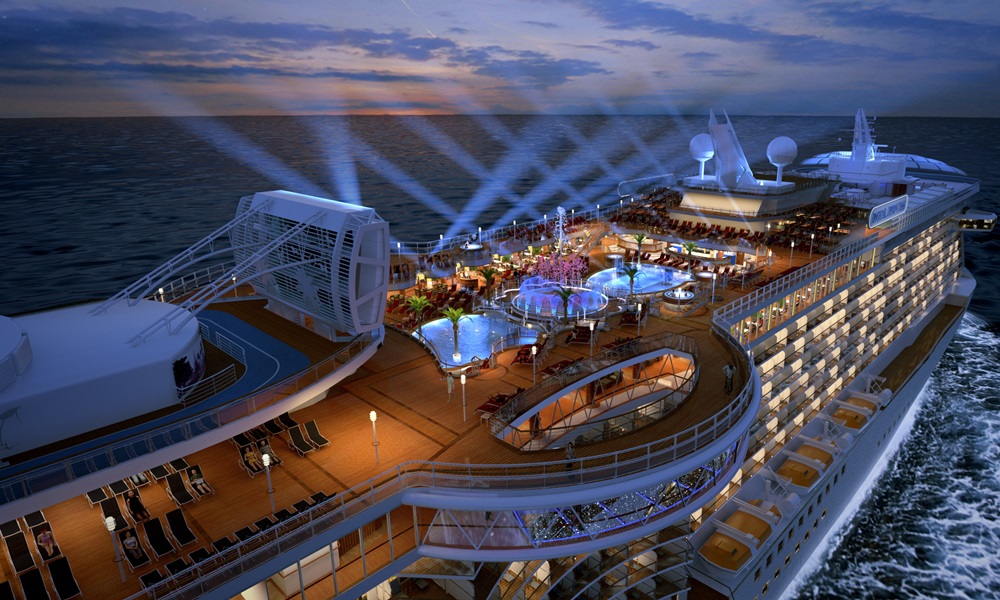 A night view of the Carnival’s Regal Princess, part of the Princess Cruises. (Source: Cruise Mapper)

Norwegian Cruise Line’s Norwegian Bliss is another example of a purpose-built ship that is customized for the promising Chinese market. The first domestically manufactured cruise liner, however, will be constructed at Waigaoqiao Shipbuilding Co Ltd., and is scheduled to be delivered in 2023. China will then see one vessel per year between 2024 and 2028.

Implications for the Global Steel Industry

With the growth of the Chinese market increasing demand for new ships and the continued, worldwide demand for environmental sustainability, shipbuilders are turning to liquified natural gas (LNG) for greener shipping. This will mean that there will be a sustained growth in demand for LNG-related steel. 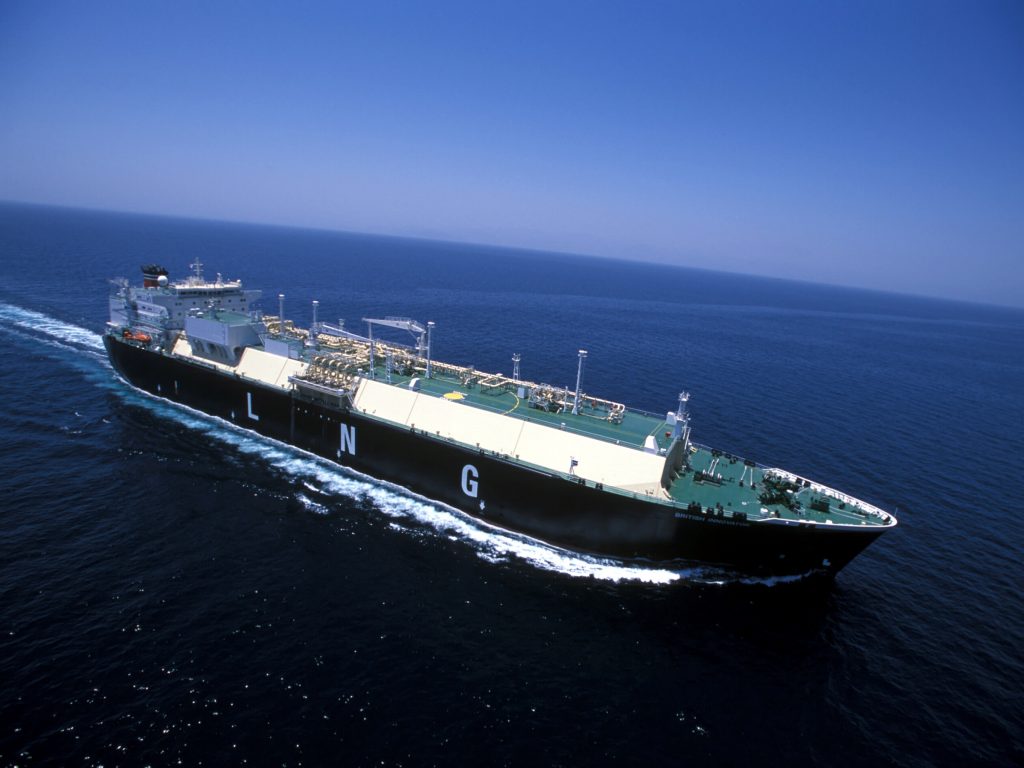 POSCO’s cryogenic high manganese steel, which has been registered as a standard technology, is being used to make a ship that can run on bunker C oil and LNG, and can carry more than 7 times the usual largest load (for an LNG-powered bulk carrier) of 7000 tons. POSCO aims to build an overseas market for high manganese steel with Korean shipbuilders.

Demand for LNG-related steel will continue to benefit from the growing global cruise market and increased cruise shipbuilding. POSCO is one steel supplier that hopes to continue to provide material solutions for the shipbuilding industry, especially for green, LNG-powered cruise ships, with its premium products.