Take a Peek Into the Diaries of the 13th ‘Beyond’ Volunteers

The 13th ‘Beyond,’ POSCO Youth Volunteers comprised of university students, returned home safely after volunteering at Cilegon, Indonesia, from January 11 to 20. 100 Beyonders flew from Korea to Indonesia, where they met with 20 Beyonders of Indonesia. The 20 Beyonders of Indonesia were scholarship recipients of POSCO TJ Park Foundation, an organization dedicated to expanding Asia’s academic and cultural networks and nurturing young talents.

A total of 120 Beyonders came together to volunteer in the vicinity of PT.KRAKATAU-POSCO. The Beyonders worked not only on improving the school environment but also on building meaningful connections by teaching local students and participating in cultural exchange activities.

* What is Beyond?
Established in 2007, Beyond is a youth volunteer corps aiming to foster conscientious global citizens. POSCO was the first Korean company to devise such an initiative. Every year, 100 university students nationwide are recruited as Beyonders. The Beyonders engage in various volunteer activities both in Korean and abroad for eight months. The activities of Beyond is considered a core program of ‘Becoming and making a good global citizen’ — one of POSCO’s six major corporate citizenship projects announced last December.

POSCO Newsroom was presented with two special diaries written in Cilegon. Two 13th Beyonders, Eun-Soo Lee (UNIST) and Chae-won Heo (Kwangwoon University) recorded events of the day, sharing the story of their volunteer work — and the true value they encountered. 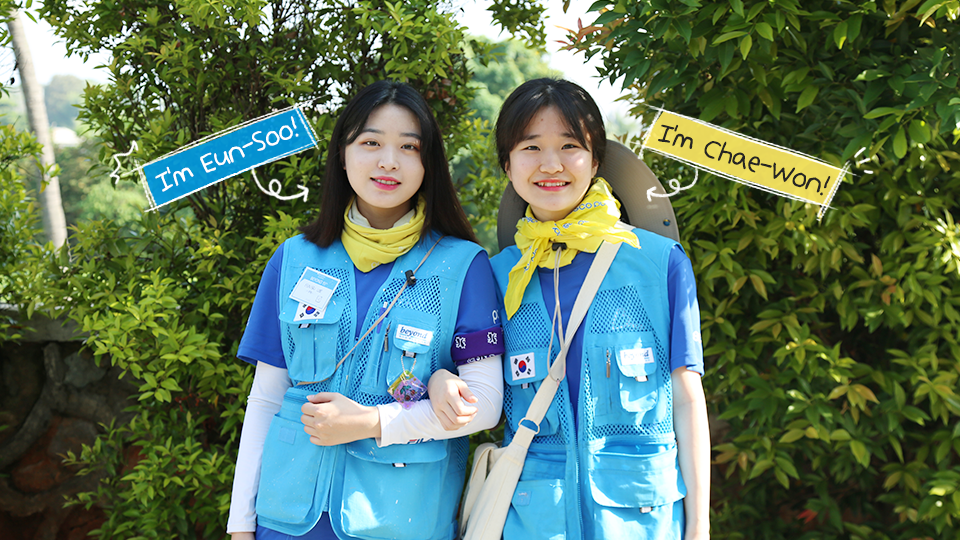 Chae-Won: On arriving, we met the Beyond members of Indonesia. Interpreters from Beyond Indonesia were assigned to each group, and we participated in several programs together to break the ice and become close. As I got to know the Beyond Indonesia members, I was really surprised! Some members knew K-Pop better than me, and some spoke fluent Korean.

Chae-Won: We had to come up with a team slogan, and our team decided to emphasize on ‘safety.’ ‘Hati’ in Indonesian means ‘Be careful!’ We added a ‘heart’ here and completed our slogan, “HATI-HATI, HEART!”

Eun-Soo: The biggest difference between Indonesia and Korea would be the scene at sunset. It’s the same sky, but the scenery here, with all the palm trees and the pink hue, seemed surreal. Then it hit me that I was indeed in a foreign land.

Eun-Soo: Wow. It was a really hard day. Carrying bricks all day long and painting with a rod that is bigger than me wasn’t easy. My whole body is aching — from my shoulders to my legs. Will I be able to make it tomorrow? Adding to the hard work, the wet weather reaching up to 29 ℃ made it harder. I had to take a rest in the afternoon because of the suffocating heat. I was sorry to my team members since it felt like my fault that I was in such a bad condition.

Chae-Won: At first, the work seemed difficult because of the environment, so I tried to avoid working hard. But as I was working, I found out that it wasn’t that difficult or hard. The moment I realized this, I was ashamed of myself. We were all in this together. If I didn’t do it, someone else had to do it eventually. But I seemed to forget that. I was disappointed at myself. Then, I looked around. All the other members and staff were voluntarily doing hard work. As I saw the Beyonders who were working, — without showing any signs of distress or exhaustion — I reflected on myself.

Chae-Won: One of the things that surprised me was that nobody complained or showed how hard the work was. Even though it was a more difficult task than when in Korea, everyone just focused and did their jobs. Watching them, I could feel that we have indeed grown up in the last few months.

Eun-Soo: During the building project, I could meet the local school students. All of them looked so sweet and innocent. And looking at them, I promised myself that I would make a better environment for them. I know that my help is not going to bring a dramatic change, but I’m sure that this little help can come together and make a difference. Through a better environment and education, I hope these children can live happily and cheerfully in the future as well.

Chae-Won: After the activities, we played Korean traditional games with the local students. I was able to show off the skills that I had mastered in elementary school, but the students were so good at it that I was a bit embarrassed. When I had to go, the students put their foreheads and lips on the back of my hands. I didn’t know what it meant, but it felt like a nice gesture. Later, I came to know that this is an act of showing respect to someone older. All the affection and respect the students showed me, made today a meaningful day. I’ll never forget it.

Chae-Won: At last the education project! I had been preparing this for a long time, and now I can finally use the training aids I made! >0< I was so excited. When I was getting ready for the class, I was worried whether the local students would enjoy the class and whether we could communicate well. But no need to worry! The Beyond Indonesia team member helped with the interpretation and also taught me Indonesian repeatedly. But there were times when this wasn’t enough, and that’s where body language stepped in. It really worked well!

Eun-Soo: The education project★ was one of the most important projects in the Beyond schedule. Our team explained about nutrients, and with fruits as example, we helped the students understand the nutrients contained in fruits. The member in charge of the project led us all well so, all nine of us could fully understand the content and focus on teaching. I was worried that the high-school students might not like the ‘glass deco’ that we used, since they haven’t used it before. But they found it interesting and focused on the activity really well.

Chae-Won: I had a chat with the students during the break, and the most memorable question was regarding seasons. The students showed great interest in the ‘winter’ and ‘snow’ of Korea. I have never thought about, ‘How many seasons does Korea have?’ or ‘What season is it?’ So it was new for me to get these kinds of questions.

Chae-Won: When the education class was over, I had a celebrity moment. The children made heart shapes with their hands, standing in a line and waiting to take a picture with me. I was a STAR. I didn’t know that Indonesian students would like Korea so much. Even though they saw me for the first time today, they gave me lots of love and attention, and had so many questions about me and my country. I was really thankful for all that. It was a new experience today. By interacting with these children, I could get rid of the prejudice I had. I will always remember today.

Eun-Soo: The practice for the cultural performance did not go well. It was the first time something like this happened. Our team was normally full of energy and positive vibes, but not today. Everyone was a little edgy, spoke as if finding fault in each other, and acted hastily. I was a little scared that our teamwork and relationship might fall apart. But as the Korean saying, I think ‘the ground will harden after the rain.’ It was a hard day for everyone today, and I believe tomorrow will be better. I will try to compliment my teammates first, support them more, and do better!

Eun-Soo: I was practicing for the cultural performance as usual. Suddenly, my teammates appeared with a choco-pie cake and started singing the birthday song for me. I couldn’t help but burst into tears because I could feel the love and affection of my teammates. My 20th birthday in Indonesia — It’s a day I will cherish my whole life♥ It was an honor to share this special day with my teammates.

(DAY7) [The Day The Beyonders Shined On Stage!]

Eun-Soo: The long-awaited day to stage our cultural performance finally arrived! The past 6-7 months of practice flashed through my mind. At first, I didn’t even know how to hold the fan properly, and sometimes it was hard and exhausting, but in the end, we made it! We put up a splendid performance! The practicing part was really hard, but it was fun as well. I could feel that the audience also connected to our feelings! >_<

Chae-Won: I was nervous during rehearsal, but when I stood on the stage, I wasn’t as nervous as I thought — So I made a huge mistake at the end. But the performance ended well. After the perfect ending pose, our team stepped down the stage and faced each other. We told each other what a wonderful performance we put on stage today, and then I realized that the seven months of practice were indeed over. I had a mix of emotions.

Eun-Soo: The 13th Beyonders were awesome. They could dance and sing like real talented singers! But the most amazing feature would be our teamwork♥ It is sad to think that our activity is coming to an end. We’ve just started to get to know each other. But as they say! You should know when to bow out ㅠ_ㅠ I should try my best not to cry when I say goodbye to my Indonesian friends tomorrow!

The 120 youths who had no idea of each other, truly bonded through Beyond. They shared special moments, wept and laughed together. Now, these Beyonders have returned as “global good citizens,” learning to care for each other in hot weather and hard times. This February, the adventure of the 13th Beyond will come to an end with a final presentation — showing their activities of the past eight months. We truly applaud these youngsters who have devoted two seasons of their 20’s to volunteering. We also look forward to the 14th and 15th Beyond that are to be born.