Birth Story of Space Walk, From Material to Construction!

We took a look at Space Walk, which had become a new landmark of Pohang, in the last episode, “Space Walk, What Are You?” Now that we have looked into the meaning of the work, we wonder how this winding and high sculpture was created. So today we will take a look at the birth story of Space Walk, from material to construction.

What on earth is the structure made of? 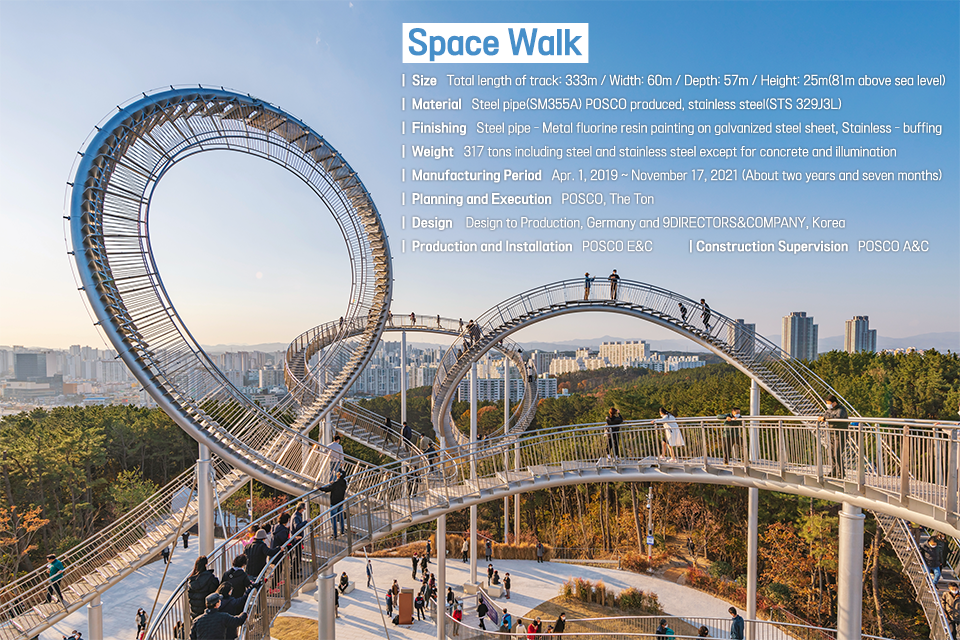 With a total track length of 333 m, width of 60 m, depth of 57 m, and height of 25 m, Space Walk boasts an enormous size, and its presence is obvious even from Yeongildae Beach far away. The total track length, 333 m, is a number that symbolizes coexistence, cooperation and the future of POSCO, Pohang, and the city’s citizens, and also refers to Pohang’s symbol 3S – Steel, Science, and Sea.

It is not an exaggeration to say that Space Walk, which was built for two years and seven months from April 1, 2019 to November 17, 2021, is a work for which all the capabilities and technologies of POSCO were mobilized. In addition to paying the manufacturing costs of the sculpture, POSCO organized a task force that executed the entire process from production to installation. POSCO A&C supervised while POSCO E&C produced and installed it.

Space Walk weighs 317 tons (except for concrete and illumination) and was manufactured with 100% POSCO steel, and was planned to become a safe and robust structure by combining artistic and engineering elements considering the installation environment and various natural disasters. The first step in a sturdy structure is material!

Since the work is located on the coast, it needs to prevent corrosion caused by salt, and after reviewing and studying various materials that are safe from strong winds and earthquakes, a material called stainless steel 329J3L was applied to the sculpture. Stainless 329 is a very expensive stainless steel grade produced by POSCO and is much stronger against salt than STS 304 and STS 316, which are generally used on beaches. 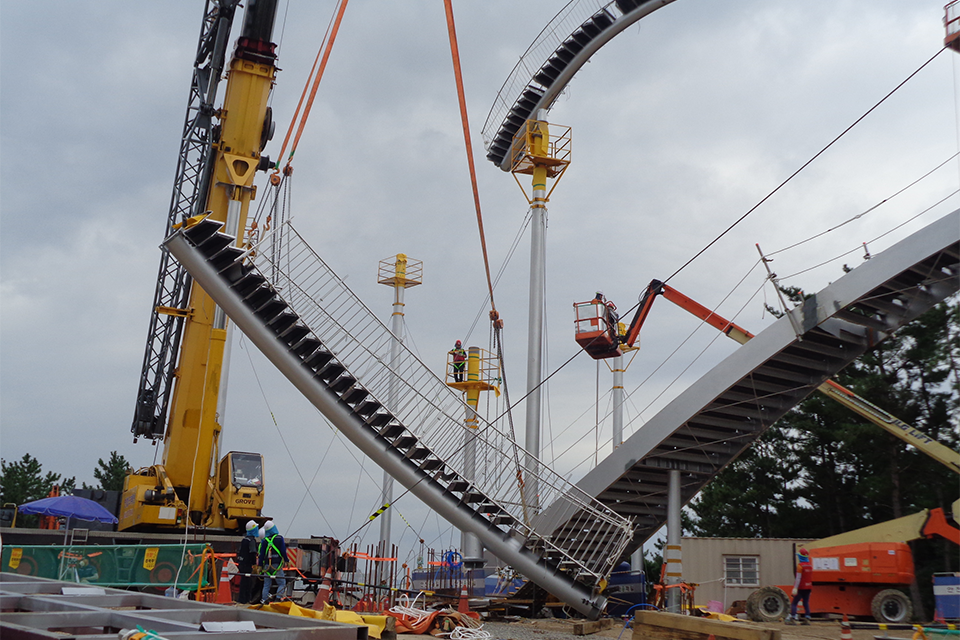 ▲ Space Walk is being built. 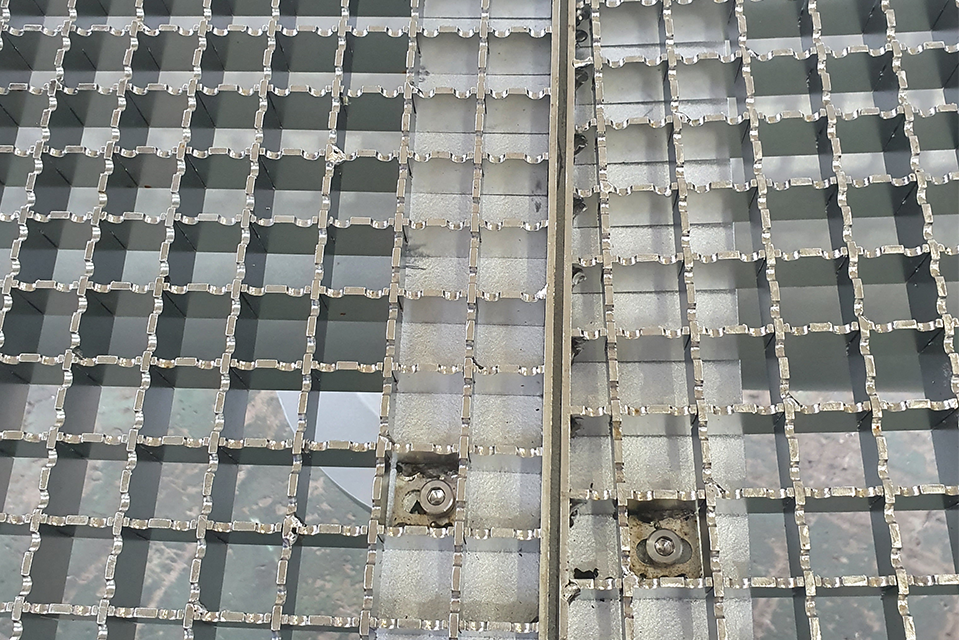 The steel tube used in the structure of the sculpture is SM355A, an advanced high strength steel product of POSCO. Considering the characteristics of the sculpture that was installed on a beach, it was finished with metal fluorine resin paint on galvanized steel to be maintained without corrosion even in a harsh beach environment.

Safety, the first step of design!

The core of the design for Space Walk can be said to be “safety.” Since it was a structure with a height of 25 m, the design of the basic concrete that supported it was important. The basic concrete that supported 25 pillars was connected using ground beams,* and 114 micro piles* that supported 85 tons per pile were additionally built.
* Ground beam: A beam that connects bases underground to prevent the movement or return trip of pillars
* Micro pile: A stake with a diameter of 300 mm or less used for the base of structures and foundation reinforcement that is reinforced with high-strength steel material. 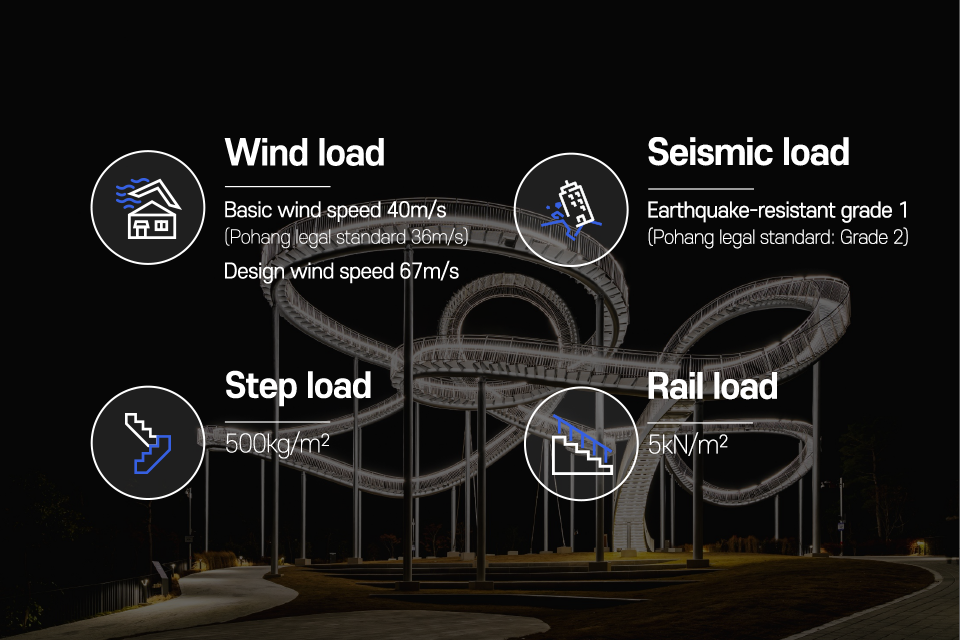 Its step load, 500 kg/m², is the same as the load applied to rooftop rally places and gym stands, and up to seven adults can stand within 1m². Since it is actually difficult for even four adults to stand within 1m², the structure is very safe. Although it was designed for more than 1,500 people to stand on the whole track, an automatic blocking device works if the number of people standing exceeds 250, considering safety.

Its rail load is 5kN/m², which is a strength that occurs when 10 adults push at the same time. However, since it is actually difficult for even four adults to stand within 1m² as mentioned before, the rail cannot collapse no matter how strongly people push.

Precise construction that does not allow even an error of 0.5cm

It was very difficult to install an atypical form of a large structure bent and twisted in a 3D manner rather than a linear form. POSCO Group showed its technology that completed the construction of an ultra-large sculpture with a 333-meter length that is supported by 25 steel pillars with a maximum length of 30 m with a margin of error of 0.5 cm or less between the starting point and end point.

To increase precision, state-of-the-art technologies and equipment used for atypical structures such as a mechanical, electrical and plumbing (MEP) layout solution, GPS and 3D scanning detection, and ultrasonic nondestructive testing were mobilized, and experts of POSCO participated to ensure preparation.

Today, we looked at the birth story of Space Walk from design to construction. Space Walk, which was created with perfect preparation, was donated to citizens as an experiential public art work.

“Space Walk is a sculpture that symbolizes the coexistence and harmony of POSCO and Pohang. We hope this will become a landmark that represents Korea with lots of love from citizens. After a museum for Pohang blast furnace 1, which will be closed, is completed, the sculpture and museum will contribute as new tourism contents in Pohang along with Park1538, a POSCO promotion center,” said Jeong-woo Choi, POSCO Group CEO.

We hope that Space Walk, which presents a new paradigm of domestic public art, will establish itself as a space that will bring new joy to Pohang citizens!

The first part: Space Walk, What Are You?