Steel Wonders of the World: The Hoover Dam

In the early 20th century, the U.S. Bureau of Reclamation devised plans for a massive dam on the Arizona-Nevada border to tame the mighty Colorado River—a feat that had been impossible for 12 million years—and provide water and hydroelectric power for the developing Southwest. Because of his agreeing to the bureau’s strict deadlines, dam expert Frank Crowe was commissioned to become the chief engineer of the Hoover Dam.

Determined to swiftly construct what was the “most ambitious government-sponsored engineering project ever undertaken in the US” at that time, Crowe immediately got to work in March 1931. Working alongside him was Walker “Brig” Young, an engineer representing the bureau. The two planned to build an arch-gravity dam, a structure that curves upstream and directs most of the water against the canyon rock walls, providing the force to compress the dam, and imagined that it would be bigger and grander than the pyramids of Egypt at its completion. 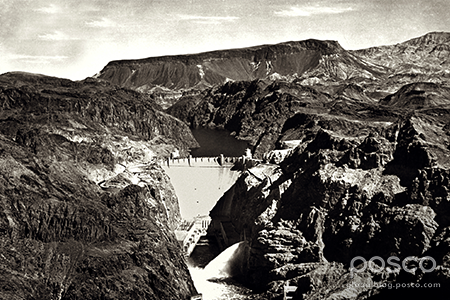 The first difficult step of construction involved blasting the canyon walls to create four diversion tunnels for the water, utilizing steel forms as sidewalls. Facing a rigid deadline of four months, workers, eager to make money as the Great Depression unfolded, labored relentlessly in 140-degree, carbon monoxide-filled tunnels with little to no clean water. Despite the growing number of deaths among workers, the unrelenting “Hurry Up Crowe” moved forward, determined to beat the deadlines in hopes of obtaining big bonuses. 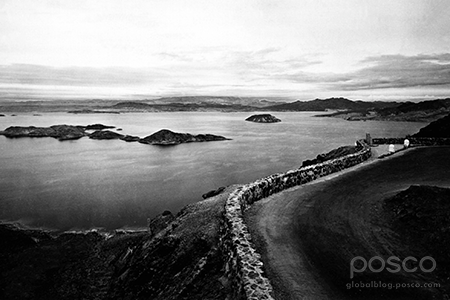 When two of the tunnels were completed, the excavated rock was utilized to create a temporary coffer dam that successfully rechanneled the river’s path in November 1932. The second step involved the clearing of the walls that would contain the dam. “High Scalers” dangled from heights of up to 800 feet to clear canyon walls, wearing tar-dipped caps as helmets and clenching jackhammers and metal poles to knock loose material, a perilous job that resulted in even more casualties.

In the fall of 1932, one year ahead of schedule, construction began on the power plant, four intake towers and the dam itself. Cement was mixed onsite and lifted high above and across the canyon via aerial cableways. Using this method, a fresh bucket of cement was able to reach the workers below every 78 seconds. This ingenious innovation was yet another reason why Crowe had been granted the contract. Offsetting the heat generated by cooling concrete, nearly 600 miles of steel pipe loops were utilized to circulate water through the poured blocks.

Built with Ingenuity, Reinforced by Steel 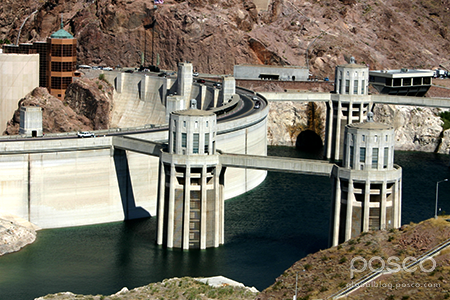 As water (which now makes up Lake Mead) began to swell behind the dam, the final block of concrete was poured and topped off at 726 feet above the canyon floor in 1935. Nine hundred-ton steel doors were closed over the mouth of every diversion tunnel, and with that, the Hoover Dam was complete. Then, on September 30 of that year, 20,000 people watched President Franklin Roosevelt commemorate the completion of the awe-inspiring structure. 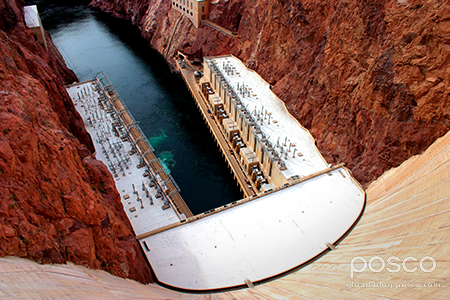 In the end, about 5 million barrels of cement and 45 million pounds of reinforcement steel had gone into what was then the tallest dam in the world. Altogether, some 21,000 workers contributed to its construction, while 107 died during the process.

The Hoover Dam disseminated the seemingly untamable Colorado River throughout the dry landscape of the Southwest, stimulating the development of major cities such as Los Angeles, Las Vegas and Phoenix. Today, it is capable of irrigating 2 million acres and its 17 turbines generate enough electricity to power 1.3 million homes. Deemed a National Historic Landmark in 1985, it sees approximately 7 million tourists annually, and stands as a testimony to the ingenuity of an entire nation.

For more information about the story behind the Hoover Dam, watch the full episode below: