Taking home a record 7 Golden Globes and landing 14 Academy Award nominations, La La Land is the clear favorite in this year’s movie award season. Taking a distinctly modern turn on an old Hollywood style musical, La La Land blends fantasy and reality as it follows the romance of Mia (Emma Stone) and Sebastian (Ryan Gosling).  The film plays out amidst the backdrop of Los Angeles as the couple takes a ride through some of the city’s most notable landmarks.

Some of these landmarks date back more than 100 years, but they have endured. Go behind the scenes to see how director Damien Chazelle brought these classic buildings to life in the fantastical song and dance numbers of La La Land.

In La La Land, Griffith Observatory, and the park where it sits, is the setting for some of the more memorable scenes. Mia and Sebastian’s first dance number took place in Griffith Park on a road overlooking the city (see image below), and the observatory can be seen later in one of the couple’s various date sequences. 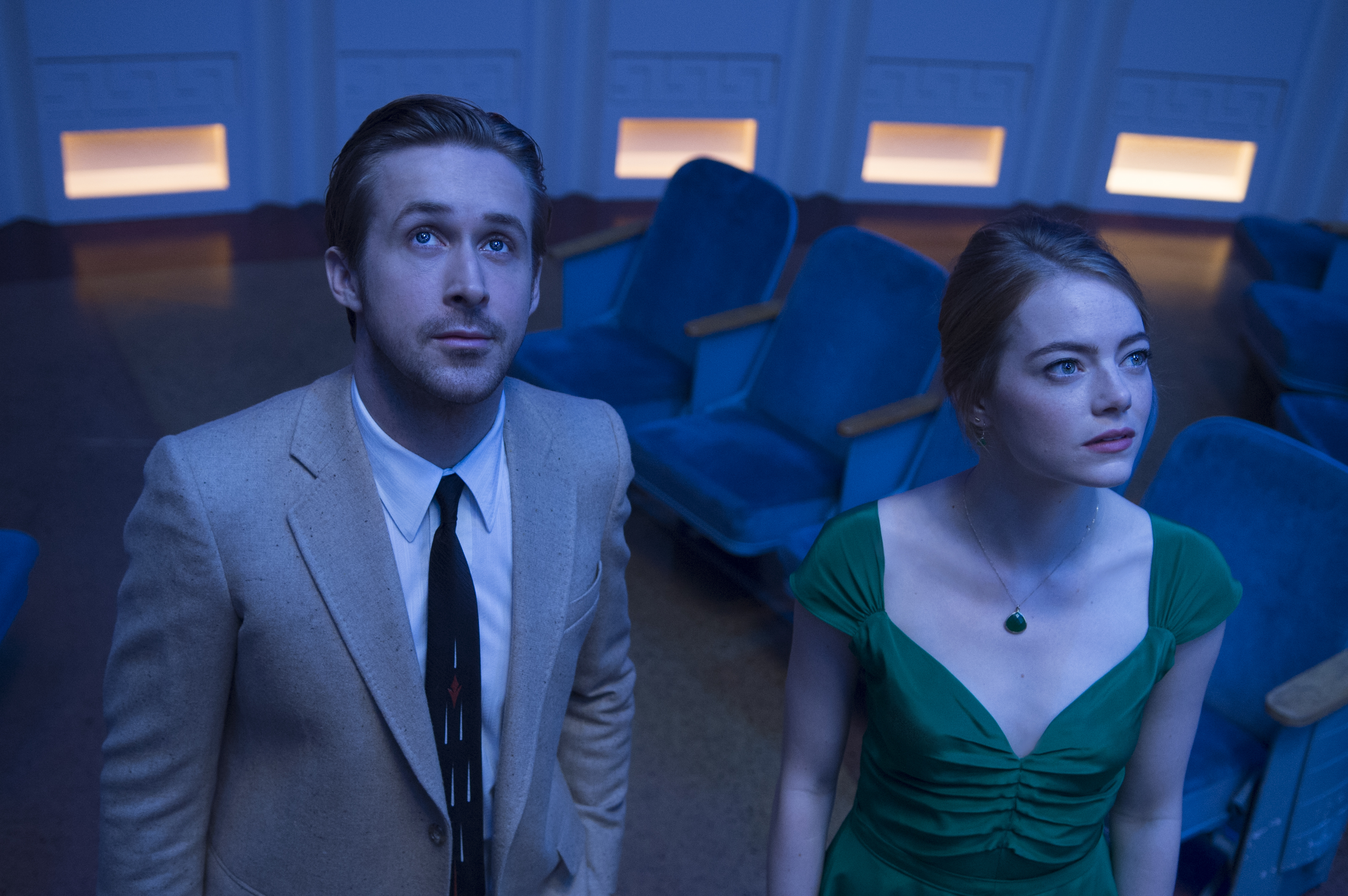 Sebastian and Mia at the Samuel Oschin Planetarium in the Griffith Observatory. (Photo courtesy of Lionsgate Films)

The Griffith Observatory opened in 1935 on land that was donated to the city of Los Angeles by Colonel Griffith J. Griffith in 1896. Sitting atop Mt. Hollywood, the observatory offers views of downtown LA, the Pacific Ocean, and the famous Hollywood sign. Visitors can access exhibitions on astronomy and space while also enjoying access to public telescopes and the Samuel Oschin Planetarium. 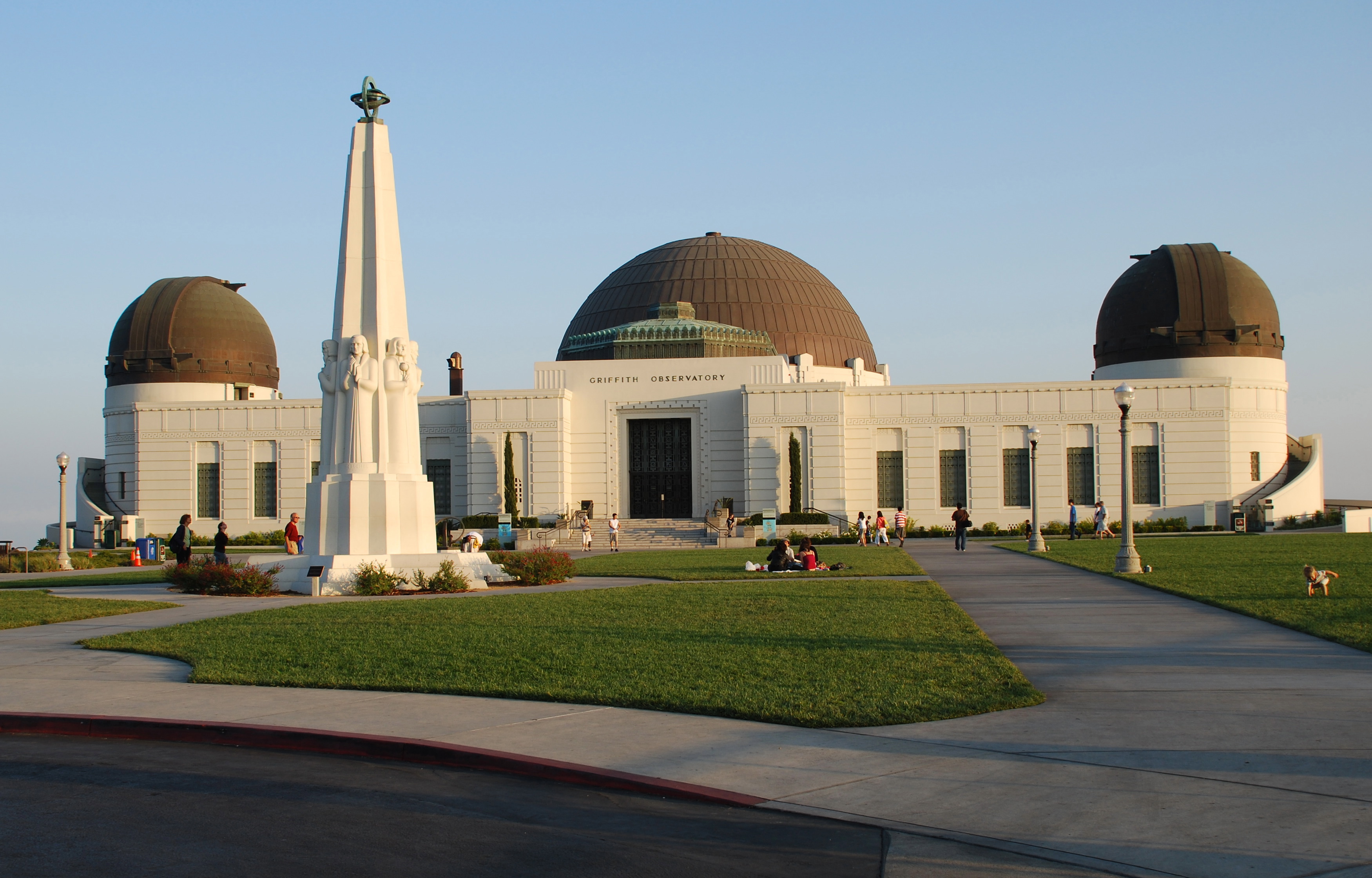 With construction starting in June 1933 in the midst of the Great Depression, designers found materials and labor were cheap. The concrete structure was supported by a steel structure, while the three domes were raised “by wrapping copper sheets around steel frames.” The observatory has stood the test of time, hosting millions of visitors since its opening in 1935. However, in 2002 the observatory temporarily closed for restorations. The $93 million renovation retained the art deco exterior while updating much of the interior, including the planetarium. 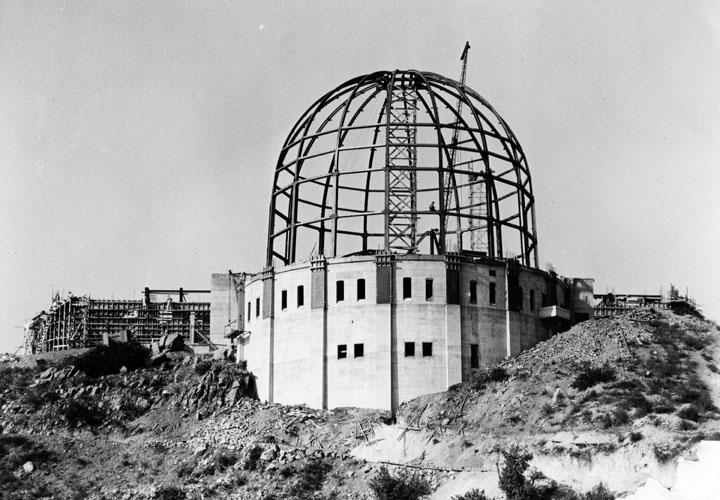 Due to its long history and iconic status in Los Angeles, the Griffith Observatory has appeared in many films and TV shows. In addition to La La Land, it can be seen in Rebel without a Cause (1955), The Terminator (1984), and even The Simpsons.

During one of the film’s montage sequences, Mia and Sebastian visit Watts Towers – a collection of 17 sculptures made of steel, metal, and concrete reaching heights of over 30 meters. Starting in 1921 and continuing for 33 years until 1954, Italian immigrant Simon Rodia made these sculptures using steel rebar, concrete, and wire mesh. He decorated them using found objects, mostly refuse, such as the green glass from cola bottles, seashells, and blue milk of magnesia bottles.

Sebastian and Mia visited the location where Watts Towers stand. Finished in 1954, the towers made of steel and concrete have stood the test of time. (Photo courtesy of The City Project)

At age 75, Rodia decided to give up on the project and go live with his sister in northern California. The city of LA attempted to have the towers removed due to safety issues; however, the art community convinced them to conduct a stress test first. Steel cables were connected to each tower as a crane attempted to move them from their foundations. The steel and concrete structures held firm with the crane ultimately buckling under pressure – forcing the city of LA to acknowledge their safety and keeping them in place for the public to enjoy.

Sebastian and Mia also visited the famous Colorado Street Bridge, allowing audiences to revisit one of the older landmarks of Los Angeles. Finished in 1913, the Colorado Street Bridge was thought to be the highest concrete bridge at that time. Its beautiful arches sit 150 feet above the Arroya Seco and have provided a romantic setting for many couples.

Sebastian and Mia talk a walk along the Colorado Street Bridge in Pasadena, California. (Photo courtesy of Lionsgate Films)

When construction began in 1912, engineers faced several hurdles.  The slopes on both sides were steep and the arroyo bed was seasonally wet; however, engineers created a work-around by curving the bridge 52 degrees to the south and using massive archways to help reinforce the concrete structure.

To support the concrete bridge, the designers used a spandrel construction with support columns holding up the arched ribs of the bridge. In total, over 11,000 cubic yards of concrete and 600 tons of steel were used at a cost of $235,000. 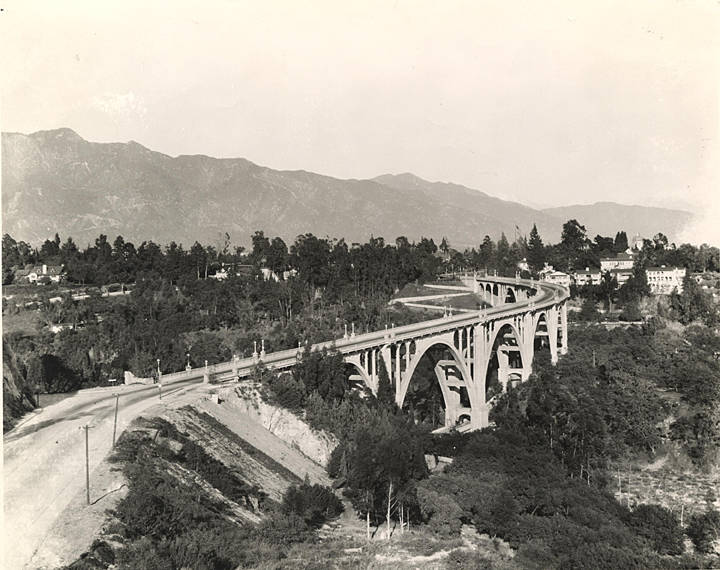 The southward curve of the Colorado Street Bridge can be seen (sometime in the early 20th century). (Photo courtesy of the Pasadena Public Library)

The bridge was used to connect Pasadena to LA, but by the 1930s it was already overrun and insufficient for the city’s needs. After falling into disrepair in the late 80’s, and eventually closed after the Loma Prieta earthquake in 1989, the bridge reopened to the public in 1993 after renovations.

Today, the bridge is open to cars and pedestrians. Visitors can come and admire the design, concrete, and steel that have kept this bridge in use for over 100 years.

With award season in high gear, La La Land is poised to bring home quite a few statuettes. Behind the songs, love, and heartbreak sits the city of Los Angeles bathed in bright lights and decorated with some of the most beautiful buildings of 20th century America. Thanks to the steel holding them together, these structures have endured time, earthquakes, and multitudes visitors.