On February 12, the music industry’s biggest award ceremony will be held at LA’s Staples Center for the 17th time in 18 years. Fans will watch as Beyonce, Adele, and Chance the Rapper battle it out to grab some of the night’s highest honors. Millions of viewers will watch live on TV as musical talent walks the red carpet and perform on stage. An event of this magnitude is only possible in an arena like the Staples Center, which is able to meet the demands of having a large stage, multiple backstage dressing rooms, and a roof that can hold lights weighing more than 80 tons.

Apart from music’s biggest night, the Staples Center hosts more than 250 events throughout the year including the games of the NBA’s Lakers & Clippers, the NHL’s Kings, the WNBA’s Sparks, and countless other events. It can host an LA Lakers game one night and in less than 24 hours, it will have transformed into an ice skating rink for the LA Kings (watch the video below to see how it is done). Rolling Stone magazine named it among the top 8 arenas in the US, and it remains one of the top grossing venues as well.

Watch the Staples Center transform itself through 6 events in 4 days.

Obviously a building of this magnitude requires steel in its construction. But a closer look at the Staples Center reveals some unique characteristics that make it stand out among some of the best venues in America.

The Supertruss Supporting the Roof

Most circular arenas and stadiums are built using a ring beam design; however, the Staples Center engineers decided to go with an exposed supertruss in which the structure’s framework is supported by one central truss that supports the building like a spine. At the time of its construction, no other circular sports facility in the nation had used such a design due to the high cost of the steel that had be used for the supertruss.

This supertruss, measuring 64m wide and almost 14m deep and spans the 132m roof with secondary trusses reaching out to connect to the walls. It was assembled in 5 separate sections more than 30 meters in the air, and after each section was complete, the mechanical and roofing systems were installed.

In this short timelapse video, the supertruss can be seen as its spans the diameter of the Staples Center

The Staples Center has hosted the awards show for 17 out of the last 18 years in part due to this roof and its ability to withstand excessive weight demands of up to 175 tons. Staples Center GM Lee Zeidman told Billboard.com that for the first show, he  hired a surveying company to make sure the roof didn’t warp and that the steel didn’t drop. He said, “Nobody had ever done that big of a Grammy show in a building before.”

To support the Staples Center against the earthquakes that regularly hit the Los Angeles area, contractors needed to increase the structural integrity of the building. PCA, the contractor that made much of the cement foundation, explained that in order to strengthen the perimeter of the main bowl area, they included 4 curved shear walls up to 53m long and almost 49m tall that were used to counter the effects of the lateral load. Also, along the radial lines are 10 more cast-in-place shear walls up to 15m long and 76cm thick. The walls are all supported by large mat style grade beams with cast-in-place ring beams tying the walls together with the precast columns between them. The shear walls and structural reinforcements provide support to the Staples Center and the visitors in the building.

Connecting everything together with steel

In addition to supporting the roof and walls, steel runs throughout the rest of the Staples Center as well.  The concession stands and restaurants are all connected by seemingly endless steel pipes that deliver the beverage of choice to millions of fans, and the ice hockey rink could never be made without the help of pumps and stainless steel piping. Murray Company was contracted for the installation of the sump pump system (for the ice floor), water systems, fuel oil systems, and concession stand piping. They reported using “in excess of 68,000 man hours with a peak crew size of 40 tradesmen” to install the maze of pipes for the Staples Center. 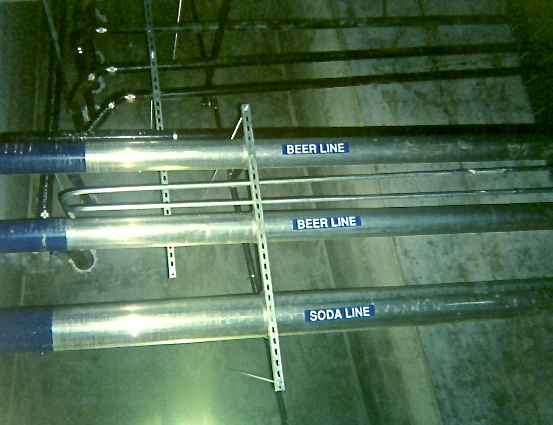 Steel piping runs throughout the Staples Center helping to make sure everything gets where it needs to be. (Photo courtesy of Murray Company)