Sexy Steel: From the Corset to the Catwalk

Let’s take a look at a few of the fashion trends that have utilized or been inspired by steel throughout time. 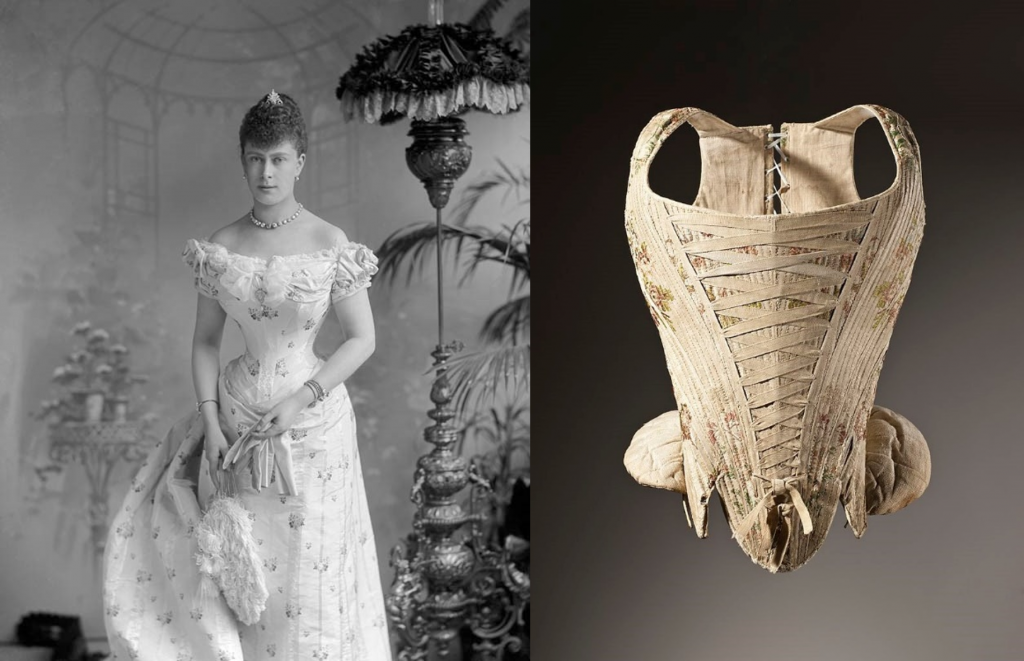 Perhaps no other clothing item has played a more influential role in fashion than the corset. It first made an appearance in fashion 500 years ago, when it was used to mold the upper torso into a rigid cone-like shape. During this time, baleen (whalebone) was used as boning to support the desired shape and prevent wrinkling of the fabric. (Images: http://bit.ly/1SPecWV and http://bit.ly/1BFWH75 )

As baleen became more expensive, and the ideal body shape of the woman began to change in the 17th and 18th centuries, steel became the dominant boning material and was used to make the corset accentuate a woman’s natural curves. This led to a widespread public outcry: from medical doctors regarding health risks, from religious leaders upset about the garment’s revealing nature and from feminists, who claimed the corset was symbolic of the imprisonment of women at the time. (Though, it should be noted that even men and young children wore corsets, too!)

In the early 1900s, fashion placed greater emphasis on comfort and rigid steel boning was replaced by more flexible steel boning. Today, corsets are mostly limited to historical dramas and lingerie shops, but the item will forever be a symbol of “sexy” steel and femininity. 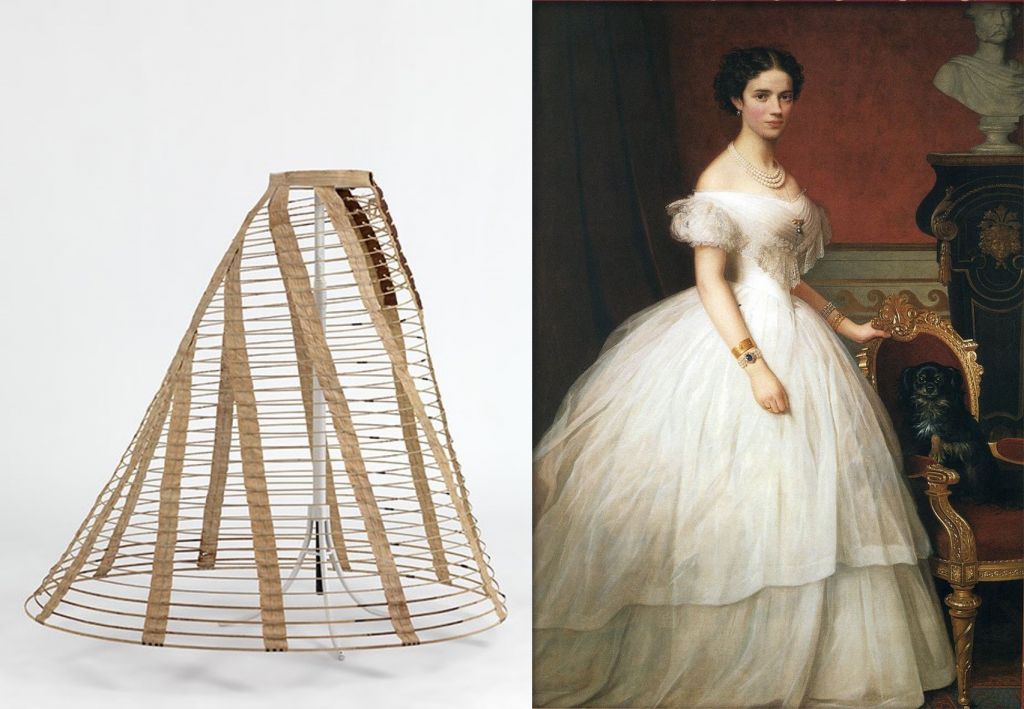 In the mid-19th century, the crinoline, a structured petticoat, became a hot trend and was sported by just about every woman in the Western world.

Originally structured with horsehair, steel was widely used in the 1850s to make the hoop skirts spread out more fully. This new style was so popular that in 1859, the New York factory of Thomson & Co., one of the most significant manufacturers of the item, used 300,000 yards of steel wire every week to produce between three and four thousand crinolines per day. Likewise, the company’s rival, Douglas & Sherwood, used a ton of steel each week in manufacturing hoop skirts at its factory in Manhattan. (Images: http://bit.ly/1LtOLrU )

The crinoline eventually fell out of fashion, but was revived in the 1940s and 50s, and again in the 80s, when Vivienne Westwood created the mini-crini. This item was designed to embody two conflicting ideals of the era – the crinoline, representing a “mythology of restriction and encumbrance in woman’s dress,” and the miniskirt, symbolizing an “equally dubious mythology of liberation.” 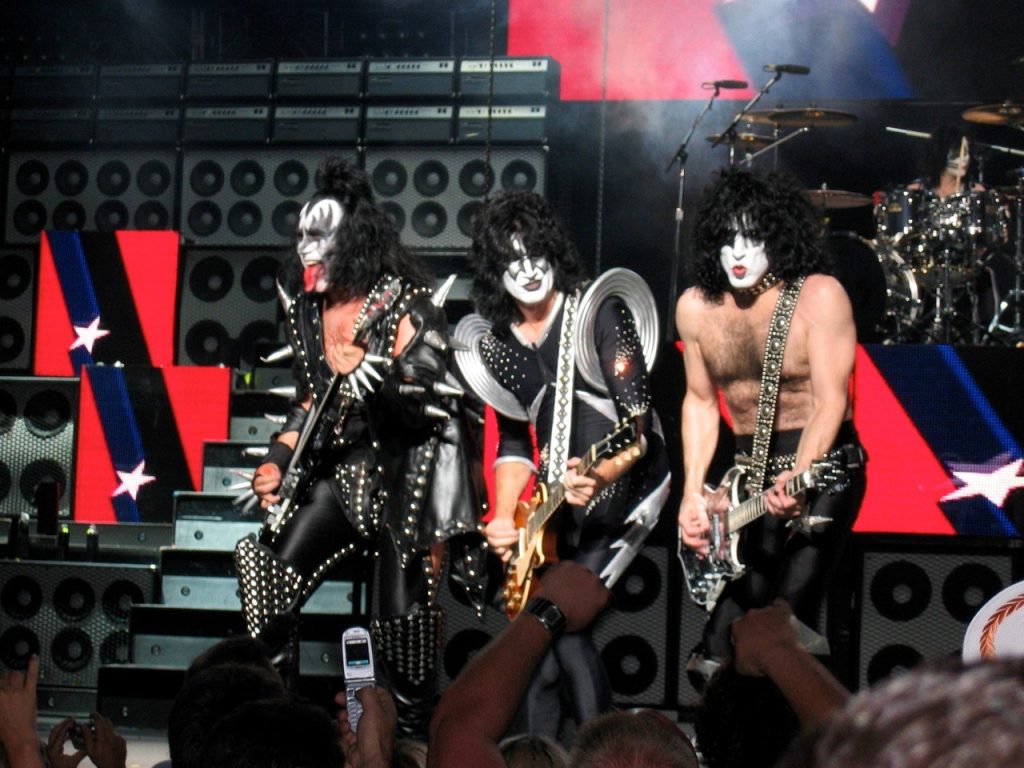 Other steel trends that cropped up during the 1970s-90s were inspired by the punk, heavy metal and rivethead subcultures that flourished during the three decades. The cultures’ associated dress styles incorporated military aesthetics, such as steel toe boots, with hints of Punk, like spikes and studs. Often, these styles were complemented by tattoos, piercings and scarification. (Image: http://bit.ly/1eTOaDE )

Steel toe boots, such as Dr. Martens, Gripfasts and Grinders, which had originally been used as a safety measure for industrial workers, became a popular choice of footwear for their rough and tough reputation. So tough, in fact, that they’ve been known to be the catalyst of injured concert-goers as a result of crowd surfing gone wrong.

Metallics in the New Millennium 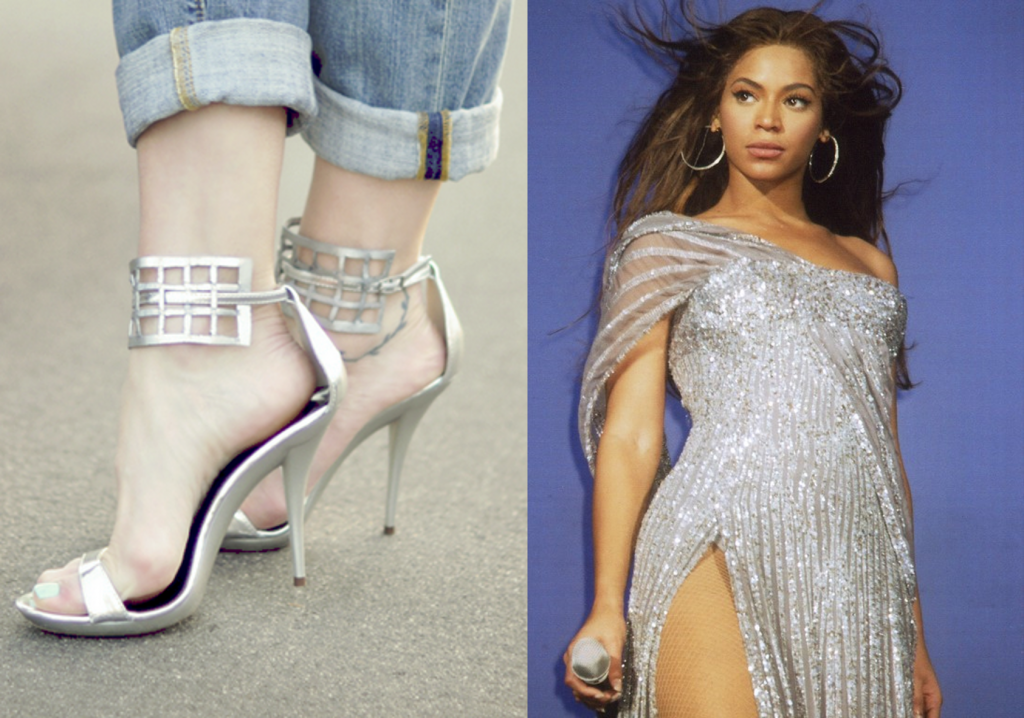 When the 2000s began, fashion trends were highly influenced by technology. “Y2K fashion” featured a monochromatic futuristic approach with metallic hues, and a heavy use of the color gray, straps and buckles. Apparel was made to be reflective, technological and sexy, and even electronics became an accessory to complete the Y2K look. (Images: http://bit.ly/1JhFiBR ; http://bit.ly/1edGVFR )

This year, metallics, which capture the vibrancy of steel, have made a comeback on the catwalk. Designers have once again rolled out sophisticated styles with reflective touches, which fashionistas pair with toned-down staples like buttoned-up blouses and printed shirts to keep things shiny but not overly blinding.

Time will only tell what the future of fashion holds. But, if the past offers any hint of what’s to come, and it often does in fashion, then we are likely to see steel on the catwalk again sooner than later.