It may not be winter yet, but para-athletes are at the peak of their training in preparation for the biggest international winter sports event coming up in early 2018. The Korean National Para Ice Hockey Team just finished off their training camp and have begun intensive training. 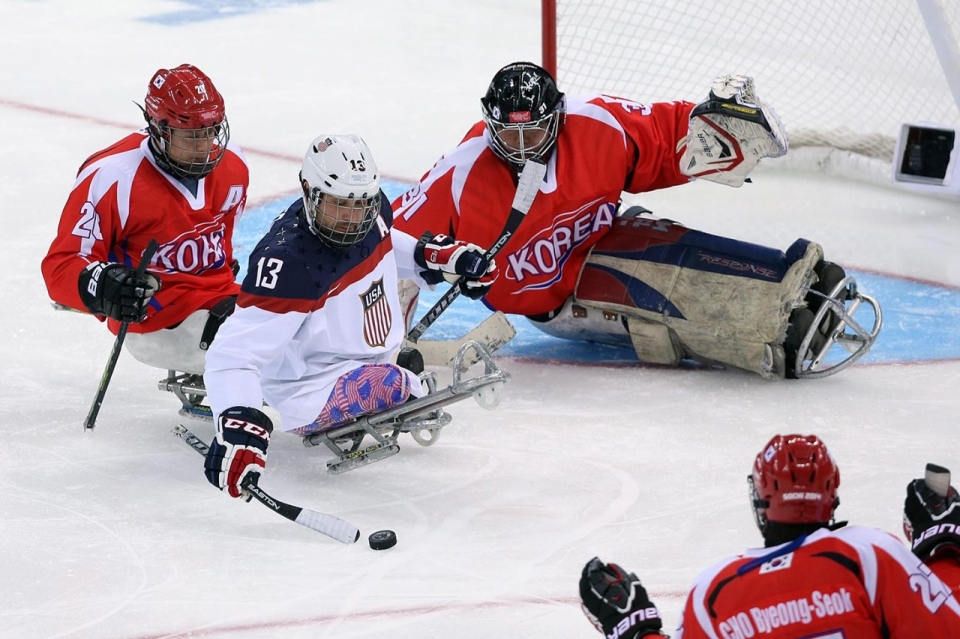 Para ice hockey, previously called ice sledge hockey, may not be common to everyone, but many consider it the highlight of para-athletic events. A team is composed of athletes who have a physical impairment in the lower part of their body, so instead of wearing skates, they glide through the rink on ice sledges (also known as sleds).

Watch any para ice hockey match, and it will be surprising to see that there is as much, if not more physical contact than regular ice hockey. Although these athletes may be limited in their everyday movement, on ice, they appear to be flying on their sledges.

The thrill and intensity of the sport are just some of the reasons why steel-company POSCO continually supports the Korean national team and para-athletics in general. It is also why POSCO joined the mission to create specially-made sledges for the Korean National Para Ice Hockey Team.

Due to the nature of the sport, the sledges have to withstand various forms of physical contact such as body checking. They also have to move in complete unison with the players, almost like an additional limb, because it determines the player’s’ steering and control of direction.

So, the sledges have a direct impact on performance.

Some members of the Korean national team have been playing for over 18 years, and they know better than anyone the importance of their sledges in relationship to performance and results. Ideally, a sledge has to be light yet strong, able to absorb shock from external contact and fit the athlete’s body perfectly.

A Korean National Para Ice Hockey Team player fights for the puck during a game against Japan.

All of the sledges the Korean ice hockey team used were previously imported from Canada. The sledges were heavier and often could not withstand harsh contact. On average, 5 to 7 sledges were damaged during a game and required repair work.

That’s why Massive Blade, a company that specializes in ice sports equipment, decided to make the sledges domestically in Korea. When POSCO heard that Massive Blade was looking for a light and strong material to build the sledges out of, researchers jumped on board the mission to produce these new and improved sledges.

This first-of-its-kind sledge was made with POSCO’s new high-strength magnesium alloy, high-manganese anti-vibration steel and stainless steel. Meaning, they replaced the heavy aluminum alloys that made up the previous sledges with POSCO’s advanced materials.

Magnesium has a high specific strength (also known as the strength-to-weight ratio) and is about two-thirds lighter than aluminum. The downside is that it is challenging to mold, so it is not widely used despite its phenomenal lightweight and specific strength qualities. This is where POSCO’s Research Institute of Industrial Science & Technology (RIST) stepped in to provide a solution

RIST has been researching magnesium and its production technology for application in mountain bike frames and car frames for 3 years. As a result, RIST also owns the necessary equipment and machinery for processing and producing magnesium parts. In order to develop their technology for processing magnesium, RIST researcher Lee Mok-Young said they had to first identify the characteristics of the material, maintain the proper heat treatment temperature and optimize the accompanying tools for molding magnesium. The molding tool is a new, innovative technology that ultimately decides whether magnesium can be shaped into the necessary parts.

When the processing technology is applied to magnesium, it results in a material that is approximately twice as moldable as regular magnesium. As a result, magnesium was able to be applied to sledges for the first time ever.

High-manganese anti-vibration steel is another material that helped enhance the sledges. They applied it to the parts of the sledge with the most exposure to contact such as the front bar and bucket brackets to prevent injuries as well as to minimize structural deformities. High-manganese anti-vibration steel is widely used in buildings for shock absorption, and according to Kim Sung-Gyu, director of the Gwangyang Steel Commercialization Promotion Team, the anti-vibration properties of the steel make it possible to contain vibrations from external force within the metal. This means less shock is transferred to the players, minimizing the risk of injury.

Finally, POSCO’s stainless steel was applied to the sledge blades. There are two blades at the bottom of every sledge, and each blade is 3mm thick. It is important to use high-strength steel so that the thin blades can stay sharp and carry the weight of the sledge and player throughout the whole game. Plus, the blades have to hold the frame 8.5cm to 9.5cm above the ice so that the puck can pass through freely under the sledge. The length of the blade also cannot exceed one-third of the total length of the sledge.

That’s a lot of work for just two blades, and that’s why POSCO’s stainless steel was applied. Besides the fact that it has optimal high-strength, hardness and ductility qualities, stainless steel is corrosion resistant, an important factor for blades constantly exposed to water and ice.

Aside from choosing the right materials, POSCO’s RIST researchers spent the most time trying to understand the difficulties and discomfort the para-athletes face on the sledges. It is true the sledges have to be light and strong, but there are further limitations to gauge precise movement and direction during an intense and dynamic game.

That’s why the researchers scrapped the project in its final stages multiple times to start over. During the process, they made numerous models and constantly talked with the players, coaches and the director. Not only that, the RIST researchers also consulted POSCO’s engineers about technical issues related to the materials. The finished product is really the accumulation of intensive research and running back and forth between the rink, the RIST research lab and POSCO offices.

National team members are adjusting to the new, upgraded sledges

The result of their collaboration is a sledge that is 34 percent lighter and capable of absorbing greater shock than the previous sledges.

The players are already adjusting to their new equipment and it won’t be long until they can test them out in an actual match. POSCO will continue to support para-athletes and the Korean National Para Ice Hockey Team so they can focus on their intensive training without worrying about sledge malfunctions and injuries.

TO (a safe) VICTORY!