Why POSCO’s 1H17 Performance is Worthy of Applause

This year, POSCO has plenty to celebrate. Last month in June, POSCO was named the World’s Most Competitive Steelmaker for the 7th year in a row by World Steel Dynamics, a global steel information service provider. It received the highest points for five categories: technology innovation, cost reduction, labor proficiency, restructuring and investment environment. Also, according to World Steel Figures 2017, POSCO is the 5th largest steel producer in the world.

POSCO continues to contribute to the growing steel industry by producing large amounts of high-quality steel for its partners, and has its sights on non-steel businesses as well. The continued efforts to stay ahead of global trends, provide solutions to partners as well as to produce the highest quality steel are what keep POSCO in the top ranks.

Here are 6 more memorable highlights from 2017 so far.

On February 7th, POSCO opened its first lithium extraction plant, PosLX at Gwangyang Works in Korea. It is expected to produce 2500 tons of lithium carbonate per year, making POSCO the first company to produce lithium on a commercial scale in Korea.

The opening ceremony of PosLX

Traditionally, the process of extracting lithium takes 12 to 18 months. In comparison, POSCO’s new, sustainable technology only requires as little as 8 hours up to a maximum of one month to extract high-purity lithium. The materials produced at PosLX will supply LG Chem, Samsung SDI and POSCO ESM, a subsidiary company that specializes in cathode materials for secondary batteries.

The demand for environmentally friendly vehicles is growing, and with it the demand for top-grade electric steel plates. In 2020, the projected demand for such parts will reach more than 1 million tons. POSCO has its eyes on the market, aiming to develop high-quality, customized materials for electric vehicle manufacturers.

In March, POSCO ran a nationwide TV ad for POSCO GIGA STEEL in Korea to showcase the superiority of POSCO’s next-generation automotive steel material. This is the first time POSCO put out a specific steel product and not the company brand at the forefront of an ad campaign. In order to convey the strength and light weight of the product, the advertisement included a strength test comparing GIGA STEEL to aluminum. The test proved POSCO GIGA STEEL to be over three times stronger than aluminum.

On April 26, POSCO completed the world’s first steel plate factory specifically for GIGA STEEL. 7CGL, which has an annual production capacity of 500,000 tons, is attracting attention as the world’s first factory to produce both GA (hot-dip galvannealed) and GI (hot-dip galvanized) steel plates among 1.5-class automobiles. POSCO secured its position as a global automotive steel plate maker through the completion of 7CGL, its 12th steel plate factory. POSCO has been able to reduce investment costs and secure cost competitiveness by carrying out both factory design and construction internally. 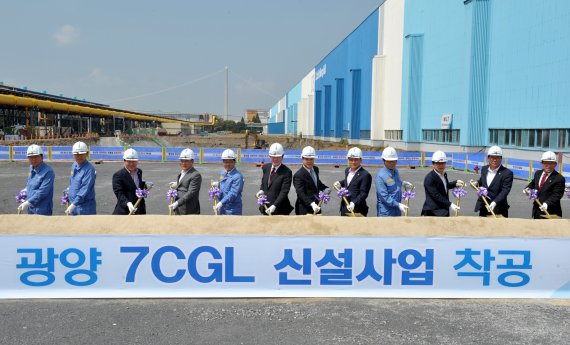 On May 11, POSCO completed their Steel Forming Laboratory at the POSCO’s Global R&D Center in Songdo, Korea, built to provide customized support for partners. POSCO is building a one-stop development system from technology development to production verification. At the core of this program is the advanced customer-oriented research infrastructure that can evaluate products in advance and develop leading technologies in a production environment similar to that of POSCO’s customers. This development will further strengthen POSCO’s solution marketing 2.0.

Despite a difficult market environment, POSCO continues to provide high-quality steel products for its partners through close cooperation and customized research. Additionally, POSCO’s expansion into non-steel sectors will not only bring added value, but help POSCO stay ahead of the changes the fourth industrial revolution will bring.