Previously on POSCO the Lighthouse Factory #1, POSCO Newsroom addressed the inevitabilities that can occur during the steelmaking process. To deal with these unexpected circumstances, POSCO utilizes the process known as ‘Smart Task’ which involves smart technologies such as the IoT, Big Data, and artificial intelligence to take on advanced issues and pioneer smart steelworks. POSCO’s smart steelworks are constantly producing palpable results, which is one of the reasons why it was selected as one of the Global Lighthouse Factories this year.
How is POSCO advancing the idea of smart steelworks? What are some practical challenges the company is addressing? Follow the story as POSCO Newsroom demystifies the rather vague intangible concept of ‘smart steelworks’ step by step.

l This Is Smart Steelworks

As addressed in the POSCO the Lighthouse Factory #1, a smart steelworks collects and standardizes all factory data via PosFrame; then, the PosFrame self-learns the data to provide optimal process conditions and controls the various operations at steelworks.

The smart process minimizes the occasions for heuristic decisions preventing human errors. Objective and accurate data can lead to a eureka moment where innovative solutions are discovered. Wait, does this mean human labors are now dispensable?

Such hasty assumption is a surefire way to creating unnecessary anxiety. What the smart technology does is to let the workers delegate simple repetitive tasks to the machine, instead channeling their sophisticated skills and mental energy into perfecting the steelworks operation. The workers feed the result back into the PosFrame fostering the ultimate synergy between technology and humans.

How did smart technology transform the steelmaking operations at steelworks? Let’s find out.

POSCO’s Order Management Group handles the planning for the entire steel production. One of their crucial tasks includes processing small lot orders — the order quantity for these small lot orders is too small that they typically do not meet a steelworks’ minimum production volume requirements.

Before smarticization, workers manually analyzed and processed the small lot orders — from checking the small lot order standards to figuring out whether and how to bulk-process chunks of small lot orders. The workers manually set the standards and modified them every half-year, the worst-case scenario being small orders sometimes ended up buried and left out. Some urgent orders were constantly classified as ‘small lot’ orders never receiving greenlight for production. In such cases, the order setting had to be reset so it can be incorporated with other orders. This used to take almost six hours or more. The average time for processing the entire small lot order is about 12 hours.

With ‘Smart Task,’ AI automatically organizes small lot orders — based on the analysis of all previous data, the system derives 12 factors impacting small lot orders. The AI also self-learns, so it can self-evaluate the orders. The processing accuracy is currently at 97%. To minimize production costs, the system also predicts the planning volumes so that small lot orders can be integrated with other orders — the production accuracy for which is at 99.99%. Compared to the previous 12 hours, the new procedure takes only an hour.

The Smart Task comprehensively controls multiple factors such as furnace ventilation, combustibility, molten iron temperature, etc.; whereas, in the past, all of these were left to manual labor.
For the smooth operation of the Smart Task, the ironmaking department at Pohang Steelworks first defined variables that impact the furnace condition and subsequently integrated various information. In technical terms, this process is called ‘standardizing data.’

Under the Smart Task system, various indicators that were previously subject to the workers’ heuristic knowledge have been organized automating the manual processes. Now, the temperature of molten iron becomes data through IoT, and high-definition cameras conduct regular check-ups on raw materials and fuels.

POSCO started accelerating the establishment of an auto-control system in 2017. Through deep learning, AI self-learns, predicts and manages the data. Beyond simple automation of the current tasks, the system predicts and controls the potential variables and derives optimal results.

Even if the current furnace condition is satisfactory, the smart system goes above and beyond to make sure the furnace maintains its optimal condition. The Pohang No.2 blast furnace became a testing ground for the automated smart technology for the first time in Korea upping the daily molten iron production by 240 tons. The smart technology applied to the Pohang No.2 blast furnace received the government designation as the National Core Technology in July this year.

The extremely high temperature required for steelmaking operation makes it difficult to measure temperature in real-time, which was why the daily operation was entirely dependent on field workers’ heuristic knowledge. Variations and human errors were inevitable in this system. Abnormalities at stages required not only a full-stop of the procedure directly involved — but also the procedures before and after.

The steelmaking Plant 2 at Pohang Steelworks has developed an integrated control system — it controls the timing, temperature, and the ingredients from the converter to the continuous casting process. There are potentially 125,000 probable procedures involved in the production for any given steel product.

Quality control is absolutely crucial, but it’s impossible to go through each and every material with a fine-tooth comb. So the typical inspection involved a through, 100% surface inspection of sample materials. If and when any abnormalities were detected in the particular sample, all other materials produced in the same batch had to be retrieved, subsequently undergoing thorough inspections.

The Pohang Steelworks No.2 and No.4 continuous casting plants annually inspected 340,000 tons of sample materials — only 30,000 tons found to be defective.

With a relatively small amount of defective materials, POSCO strove to minimize the time wasted, and to maximize the company’s resources. By applying artificial intelligence, POSCO collected a vast amount of data on steelmaking and continuous casting processes thereby establishing a model to predict defects. This was done by creating criteria of what constitutes as abnormalities in quality. Since the adoption of the new system in March 2018, the system now only screens defective materials, eliminating unnecessary testings. Furthermore, it pinpoints the reasons for the defect — the new system is expected to save over 600 million KRW every year.

Thick plate products first undergo the slab-heating process subsequently going through two rolling procedures. After that, according to the customer’s requirements, it undergoes an accelerated cooling process called Thermo-Mechanical Control Process (TMCP). TMCP involves spraying high-speed water on a steel plate rapidly cooling it to a designated temperature to improve the strength and the welding capacity of steel products. The process requires special equipment — and the water-spraying technology is highly advanced. Without accurate maneuver, the flatness of a steel product can be compromised.

In the past, the flatness of thick plates was manually analyzed, twice — once when the plate was hot (hot flatness) after TMCP treatment; and again, when the plate cooled down (cold flatness) during the shearing process. Measuring flatness in such a manner was extremely time-consuming, and it often caused a functional overload — it was challenging for the factory engineers to control the TMCP by manually inputting the results one at a time.

The plate plant at Gwangyang Steelworks created a learning model by analyzing the influential factors for hot and cold flatness — ultimately the company figured out the conditions that can achieve the most optimal flatness. Now, the engineers can simply monitor the optimal working condition values produced by AI supervising the smooth operations of each process. The correction needs for the products during the post-TMCP process are now reduced to 50% which saves about 1.3 billion KRW annually.

After plates are taken out the zinc pot, an air knife controls the coating amount by cutting out zinc before it solidifies on the surface. The target coating weight varies for each product, and the coating weight could be measured only after the air knife procedure and solidification completed. This is why the live-control of coating weight remained challenging.

A truly smart steelworks operation prioritizes workers’ safety as well as the environment. POSCO is no exception. What makes POSCO exceptional in this domain, especially when it comes to its application of smart technology, is the way the company utilizes smart CCTVs. POSCO developed a smart CCTV system — unlike general CCTVs which simply record video footage, POSCO’s smart CCTV auto-detects patterns and movements at production facilities. When the system recognizes any abnormalities, it promptly alerts the administrator in charge. 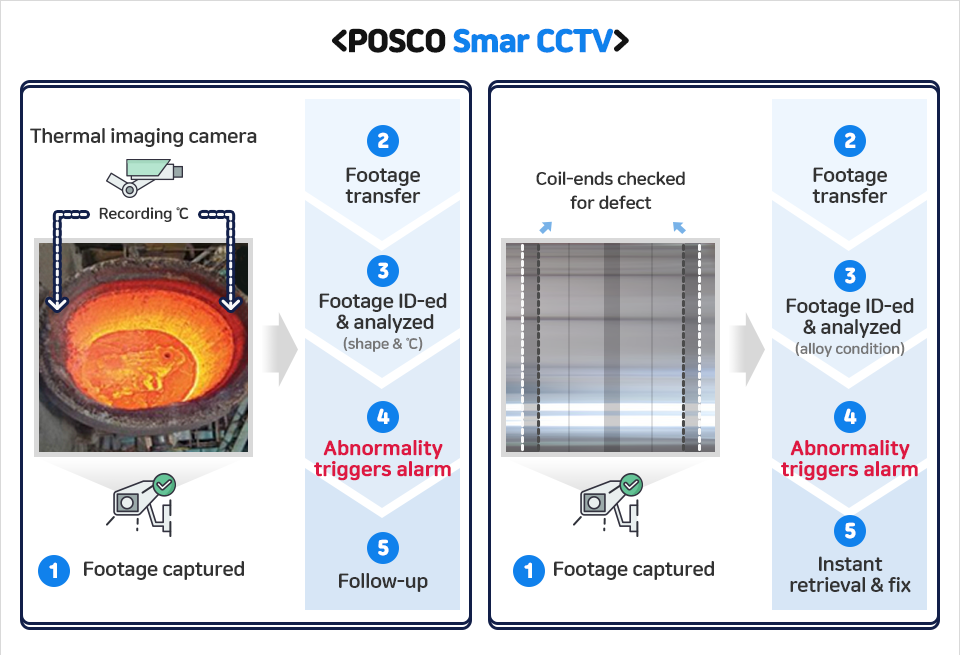 Smart CCTVs automatically recognizes and analyzes various information such as the product quality and safety information, reducing the amount of time workers merely ‘stand by’ just to check all the information manually. At a steelmaking plant, for example, smart cameras can measure the temperature of molten iron. At a surface treatment plant, the smart camera detects the subtle color difference of coil-ends allowing prompt response for potential quality defects.

Furthermore, multiple imaging devices, such as thermal imaging cameras, can proactively detect and prevent fire hazards. At all corners of POSCO steelworks, smart CCTVs gather information and identify potential hazards before anybody does.

POSCO’s smart steelworks is an ongoing project. With the establishment of smart technology, POSCO will continue to address the challenges remain unsolved — POSCO aspires to complete the smartization process to ensure production efficiency, top quality products and improved safety.