The heart of the steelworks is the blast furnace. There are about 600 blast furnaces around the world. Then, which would be the smartest blast furnace in existence? By all means, it would be the No.2 blast furnace of POSCO Pohang Works. It’s even called an ‘AI Furnace’. Can you imagine a furnace equipped with artificial intelligence?

POSCO Pohang Works was selected as the ‘Lighthouse Factory’ for spearheading innovation in manufacturing by the World Economic Forum (WEF) in July last year, opening a new horizon for smart blast furnaces. The WEF consultant, who visited Pohang Works for site review, showed great interest in the live monitor-controlling of the blast furnace. This complex and huge furnace is controlled by pairing the expertise of POSCO workers with AI technology. On January 9, South Korea’s President Jae-in Moon visited the site and watched the world’s smartest furnace at work.

POSCO is also striving to strengthen its industrial ecosystem by sharing its Smart Factory platform with business partners — including SMEs. Let’s take a closer look at how POSCO is working on its Smart Factory and pursuing Corporate Citizenship.

l POSCO’s Blast Furnace — At the Forefront of the Fourth Industrial Revolution.

Since the term ‘Fourth Industrial Revolution’ was first used at the 2016 Davos Forum, it has become the mainstream of all industries. Companies started working on to quickly acquire the core technologies of the Fourth Industrial Revolution — like Big Data, Artificial Intelligence, and the Internet of Things. Twice a year, Davos has been designating factories that are leading innovation in manufacturing as ‘Lighthouse Factories’. Last July, POSCO became the first South Korean company to be announced as a lighthouse factory.

The accumulated data became the base of big data. Since 2017, POSCO has been working on deep learning with big data. Through deep learning, the blast furnace can self learn from the numerous cases given. This process called, “Smartization” enables the system to predict and control the potential variables, and to derive optimal results. The IoT has also accelerated the establishment of smart furnaces. In the past, multiple factors such as molten iron temperature, the amount of fuel and raw materials, and so on were left to the manual labor of workers. However, through IoT, high-definition cameras and sensors can take care of the data automatically. 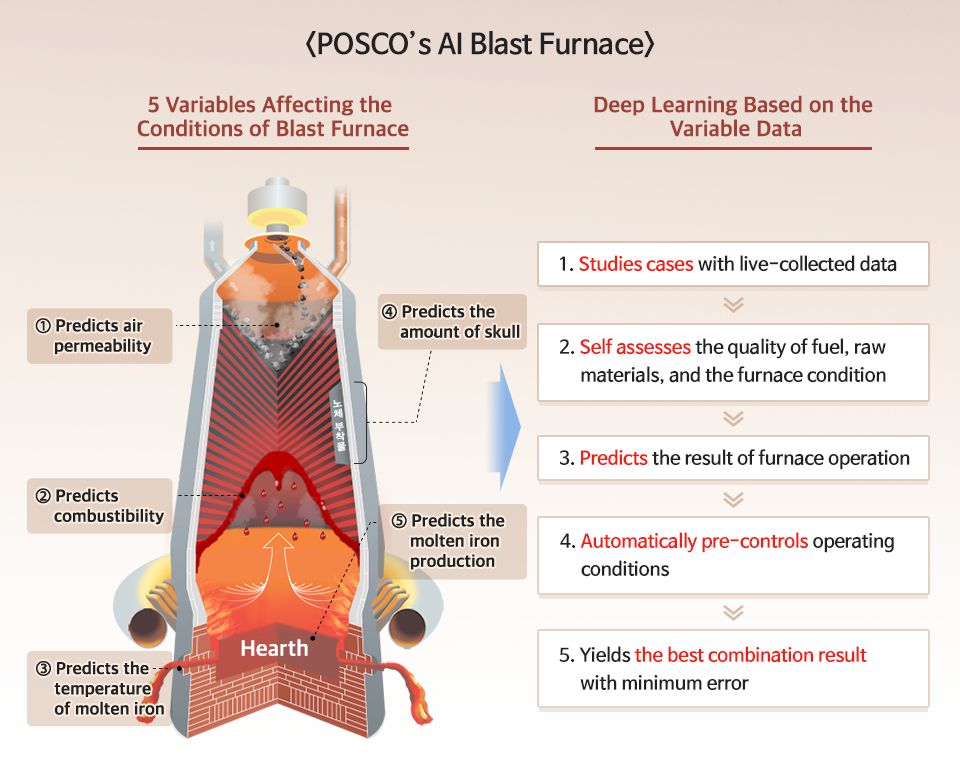 ▲ The internal temperature of the furnace can go up to 2,300℃. In the inside, several materials like iron ore and coke are mixed, causing various chemical reactions. It’s like a huge pressure vessel that’s 40 stories high. POSCO succeeded in data standardizing and automating the blast furnace.

As a result, Pohang No.2 Blast Furnace has become capable of self-control and prediction to an artificial intelligence level, giving it the name, ‘AI blast furnace’. With the experience of experts who have worked for more than 30 years at ironmaking, the smart furnace boosted the daily production of molten iron by 240 tons. Annually this amounts to 85,000 tons with which automakers can produce 85,000 more cars.

There is always a concern that follows these kinds of changes, “Won’t AI make people lose jobs?” But the answer is “No.” Instead of looking into the furnace all day, workers can focus on more advanced work with their Domain Knowledge. This enhances the possibility of more creative performance.

Currently, leading global companies are adopting the smart factory platform. Then what makes POSCO’s Smart Factory more special? The answer lies in the platform established for the ‘Continuous Processing’ — a special term of steelwork. POSCO doesn’t stop at applying this platform to just furnaces. It has gone on to extend these smart factories to the overall steelmaking process. PosFrame, the engine of POSCO’s Smart Factory, is its unique factory platform specified for continuous manufacturing processes.

The steelmaking process is continuous, running smoothly from production planning to delivering the final product to the customer. Therefore, applying the smart factory platform to steel works is quite challenging — with a much bigger scale — than applying to a single factory that produces a single item. Pohang Works is massive in size, with hundreds of factories manufacturing hundreds of different steel products. In such an environment, data from each site should be gathered, organized, and standardized so that anyone can process it. This is one of the main functions of PosFrame.

Let’s say that the steelmaking process starts from A and ends at Z. When PosFrame is applied completely to the steelworks, it is possible to trace the cause of an issue that occurred in Z to A. 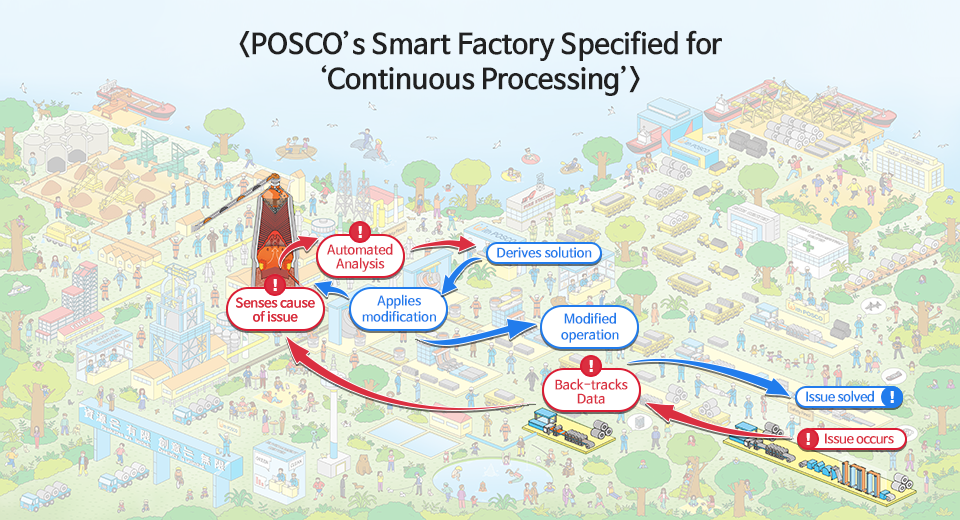 l POSCO’s Technology For All Business Partners to Share

How is Corporate Citizen POSCO dealing with this unique technology? POSCO isn’t planning on making this technology exclusive. Instead, POSCO is working on expanding the smart factory technology to business partners including SMEs.

Dongkuk Industries, which has factories in Pohang and Siheung, is a company that processes POSCO’s hot rolled steel into high-quality cold rolled steel. This product is then supplied to companies that produce automotive parts. At Dongkuk Industries, steel goes under the pickling process, where hydrochloric acid (HCl) is used to remove scale on the product surface. This takes a great deal of time since each customer demands different quality requirements. Since it is nearly impossible to match each requirement, Dongkuk Industries pickled all materials even though each POSCO hot rolled steel had different scales. Naturally, productivity decreased, and this is where POSCO’s Smart Factory technology stepped in.

First, through PosFrame, POSCO sends predicted data showing where and how much scale is on the supplied hot rolled steel. This predicted data is received at the “AI for optimal pickling” in Dongkuk Industries. In the past, the pickling conditions were calculated manually by workers, but now this AI automatically extracts the optimum value based on the data obtained from PosFrame. After pickling, the resulting data is passed back to PosFrame. As POSCO hot rolled steel is processed into high-quality cold rolled steel here, its data are accumulated in PosFrame as big data and advanced through repeated learning. The data on both sides are exchanged repetitively, enabling the production of an optimized product — as if produced in a connected plant. The application of the Smart Factory in Dongguk Industries minimized the time required for the pickling process while securing product quality required by the customer. This increased productivity by 60%, and high-quality material sales by 1.5 times. 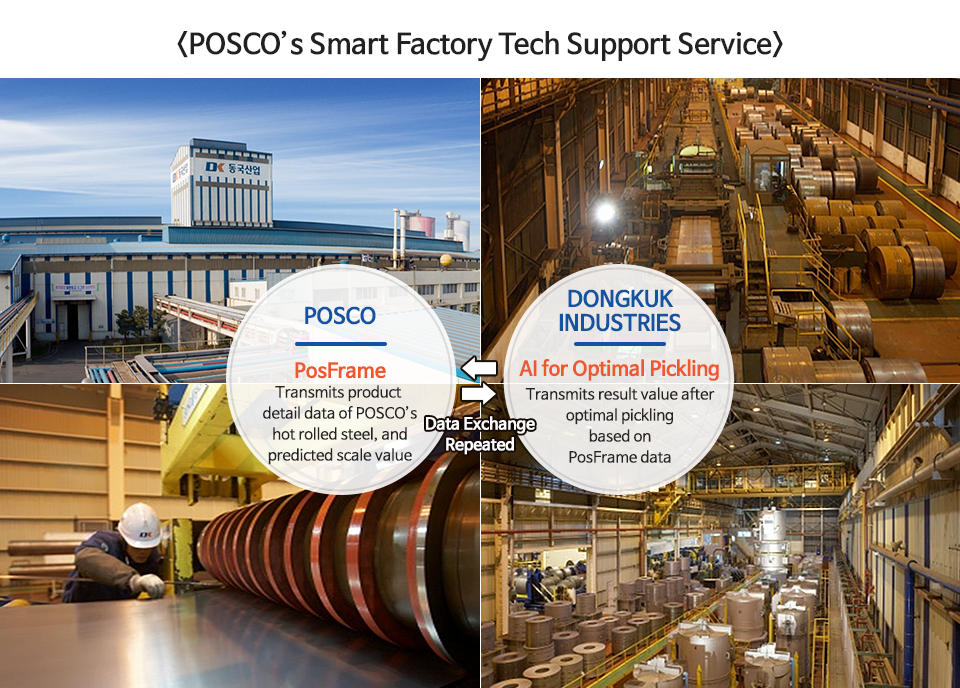 ▲ Dongkuk Industries established a Smart Factory with POSCO. (From the top left clockwise) the front view of the Pohang factory; the pickling line; the hydrogen furnace; and the wide shear line. (Photo credit: Dongkuk Industries)

POSCO is also concentrating on Smart Factory consulting for SMEs. This service isn’t limited to direct customers but expanded to other business partners, including secondary customers. POSCO has engaged in support service to build Smart Factory for shared growth with the Ministry of SMEs and Startups — establishing Smart Factory in 110 companies until last year. At the same time, POSCO also provides ‘Smartification Consulting’ to enhance competence, thus, delivering advanced field expertise through POSCO’s unique innovation technique QSS(Quick Six Sigma). By 2023, POSCO is to contribute 20 billion KRW to empower 1,000 companies. 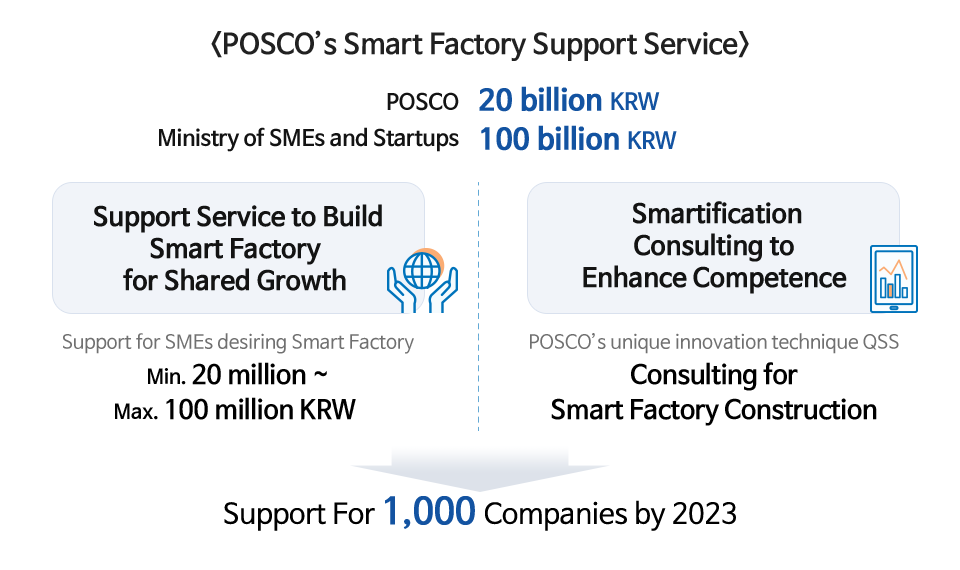 POSCO is operating seven major programs for shared growth, and some of them are as follows — ‘Open Purchase’ offering fair trading opportunities; ‘Proper Payment On Time’ abolishing the lowest price bidding system and giving payment in cash on time; ‘Corporate Citizenship Job Matching’ training job seekers and arranging employment at partner companies. Additionally, POSCO has aided 1 trillion KRW, leading the way in establishing a Venture Fund of 2 trillion KRW, and a Venture Valley to support start-up activities for the youth.

POSCO has become the “lighthouse” of the global manufacturing industry with its Smart Factory. And in Korea, POSCO is actively working as a guide of Smart Factory for business partners.