At Davos 2019, the World Economic Forum welcomed POSCO into the Global Lighthouse Network. Since 2018, Davos has been selectively designating factories around the globe as ‘Lighthouse Factories’ for spearheading innovation in manufacturing.

POSCO is the first South Korean company to receive such recognition. Through its smart-factory platform, the company demonstrated its ability to leverage artificial intelligence to drive productivity and quality improvements in the steel industry.

Lighthouse factories represent a range of industries that demonstrate leadership in applying Fourth Industrial Revolution technologies like IoT, cloud computing, Big Data, and AI, to drive financial and operational impact.
For the last five years, POSCO has laid the groundwork for the smart factory to boost its competitiveness in steelmaking. POSCO’s selection signifies global recognition of the company’s such effort.
From the submission of the application, due diligence, to documentation review by WEF consultant, the lighthouse factory selection is an arduous process. From the initial application submission, it took POSCO about one year until its final selection as the lighthouse factory.

One of POSCO’s esteemed contributions was its establishment of a sound ecosystem where SMEs and start-ups can thrive through active collaboration. Additionally, POSCO’s smart factory platform was customized to meet the needs of the steel industry. One of the WEF consultants at POSCO’s steelworks was especially impressed with the way in which years of human skills paired superbly with the new AI technology in monitor-controlling the massive furnace operations live, 24/7. 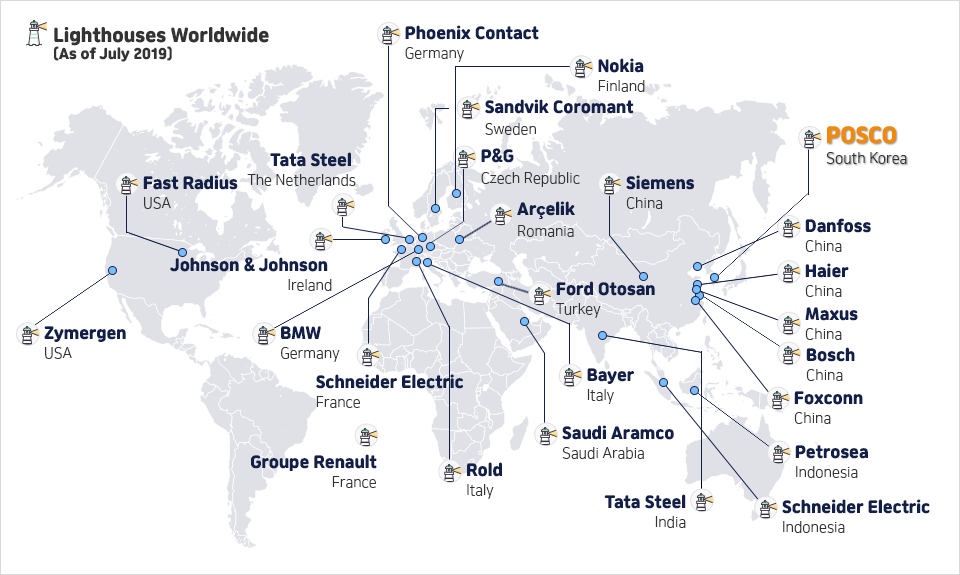 There are altogether 26 lighthouse factories around the world including POSCO, Siemens, BMW, Johnson & Jonson, and Haier. The lighthouse designation effectively gives the companies the Global Lighthouse Network membership among which the members share their knowledge and experiences enhancing their ability to better-adopt smart-factory platform. POSCO plans to utilize the benefits the Network offers to boost its ability to establish and advance smart factories that meet ever-changing industry demands.

Heavy pole and massive chimneys are some of the things that people associate with typical steelworks operation. What’s so complicated about steelmaking? — isn’t it all about stuffing everything in the blast furnace where molten iron comes out? Then molding the molten iron, baking it, pressing it, and cutting it up?

Even with their expertise, however, each engineer’s experience varies. In the immense intricacy of steelworks operation, POSCO must deal with the inevitable at all times. What are some of the inevitable situations that can occur during the steelmaking process?

Production Planning: POSCO’s ‘Order Management Group’ is the brain of all steelworks operation — not only does it take orders, but it also manages production schedules, locations, and production methods. The Group is also in charge of figuring out precise production timing as per special customer requirements. Some customer requests involve a unique mixture of ingredients, so there are always many variables to consider. There are at least 10 ‘standard’ procedures the Order Processing Group must consider. Only after these minimum standards have been met, the steelworks operation of that specific order can receive greenlight.

Ironmaking: POSCO Newsroom previously covered the basic concept of managing ‘blast furnace condition’ in the ‘Blast Furnace Anatomy #1 — To the Heart of Steelworks Operation’ (LINK). There are countless tasks involved in 24/7 blast furnace operation — from maintaining temperature, placing in fuels and raw materials with precision, to predicting the amount of by-product gas generation.

Steelmaking & Continuous Casting: The steelmaking department removes impurities from the molten iron produced in the previous ironmaking stage, by way of converter — the molten iron becomes ‘steel’ in this process. During the casting process, the ‘steel’ is molded into intermediary materials like slab, bloom, and billet.

Molten iron can be made into countless different products to meet diverse customer needs, each requiring different portion and mixture of ingredients. To achieve this goal, the molten iron undergoes four different stages of ‘blowing process’ where oxygen is pressured through molten iron to lower the carbon content of the alloy, changing it into low-carbon steel.

At this point, the molten ‘steel’ goes through continuous casting, after of which is cooled down and cut. Temperature and ingredient management with precision is crucial for maximized use of limited resources.

Rolling: The next step is ‘tempering,’ a process of heat treating, which is used to increase the toughness of iron-based alloys. In ‘Game of Thrones’, blacksmiths constantly bang on the iron as a way of hardening the material. In steelworks, the process of rolling achieves the same goal.

In rolling, materials are passed through the rotating rolls to produce steel products that meet customer demands: in thickness, width, strength, durability, etc. Imagine baking bread, each with a different requirement for textures, tastes as well as shapes.

Surface Treatment: Automotive steel plates and home appliances are galvanized so that they become more corrosion-resistant, more suitable for various manufacturing purposes. Precise surface treatment suited to each purpose is the key to an advanced coating technology.

Notwithstanding the 100% effort aimed for perfection, complex steelmaking process overflows with information. Variation — be it human or mechanic — is inevitable in each and every step of the process. To address such variation, POSCO is opting for the smart factory, identifying it as the next-generation of its growth engine.

The establishment of smart factories must be preceded by the digitization of factories. Through Process Innovation Project (PI Project) in the 2000s, POSCO successfully achieved digitization of its factories. What set POSCO apart from the various similar endeavor is that the company has been working this digitization muscle for a while now. Smart factory, which is being built on the digital factory, is at the center of POSCO’s unique smart factory platform called PosFrame.

What is the origin of POSCO’s smart factory? It can be traced back to the year 2015 when the hype of smart industry hasn’t quite caught on the flame. Even back then, POSCO introduced new technologies like Big Data, specifically at the Plate Plant at Gwangyang Steelworks. At this point, Gwangyang became a testing ground for POSCO’s smart factory. During this process, the foundation for ‘PosFrame,’ POSCO’s unique smart platform, was created.

With PosFrame, POSCO could establish a system in which the company’s countless data and skills accumulated through the 51 years of its operation can be integrated and stored in one place.

How is this different from conventional digitization?

PosFrame is the world’s first smart factory platform specified for continuous manufacturing processes. The reason why ‘PosFrame’ is identified as a ‘platform’ is this: think of railway platforms. Railway platforms are where different types of trains pass through — be it bullet trains, express trains, or slower all-stop trains. A platform manages information about different types of trains — in this case, data — coming and going all the time. It’s a perfect system for 24/7 steelworks operation. The goal of PosFrame is to pinpoint the reason behind a product defect, if and when, by meticulously back-tracing the steelmaking process to figure out exactly where a variation might have occurred.

Furthermore, PosFrame goes beyond simple digitization. Whereas digitization simply stores information as data, PosFrame analyzes the data, enabling the development of automation models.
Here, a question might arise: isn’t automation something only reserved for experts? PosFrame’s ‘Workbench’ feature says no. Workbench is accessible to everyone. For example, field engineers can apply their expert knowledge and use the data to develop automation models so that the models can be utilized in various steelmaking processes. Thanks to the data collected and standardized by PosFrame, engineers can analyze information not only for the process they’re directly involved but also the processes that come before and after. PosFrame makes it easier for the engineers to tackle difficult issues that previously remained as random occurrences. 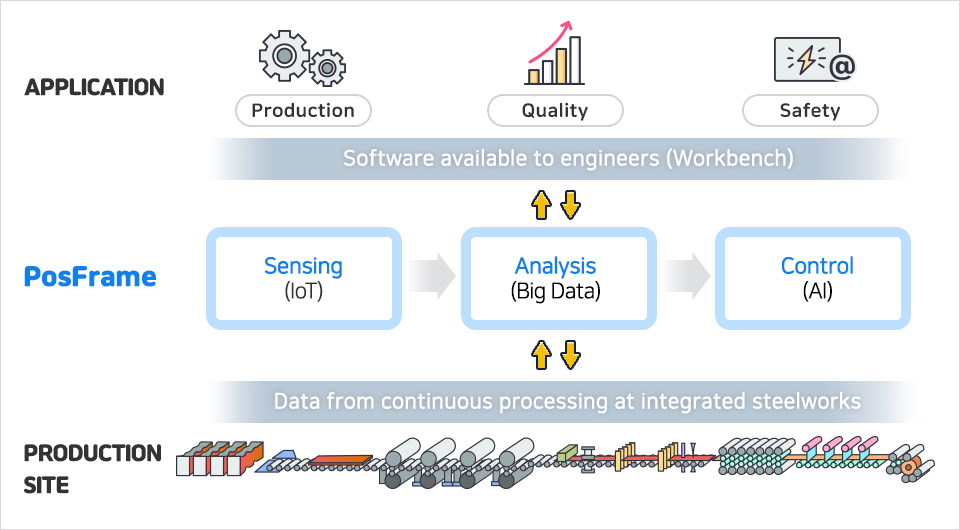 The incredibly accessible PosFrame accelerated POSCO’s advance into smart factories. Through PosFrame, all POSCO employees are turning into semi-AI experts.

To further its smartizaton process, POSCO has been providing smart tech training to all employees since 2017. The training is helping the employees take their skills to the next level towards establishing a more data-driven working environment.