l Marking the 70th anniversary of the Korean War, POSCO presents appreciation plaques for 3,700 Korean War veterans in 16 countries through overseas subsidiaries and embassies
l All plaques made with PosART (color printing) on POSCO stainless steel carry the message, “You will always be remembered”
l POSCO receives more than 80 thank you letters from veterans in 16 countries 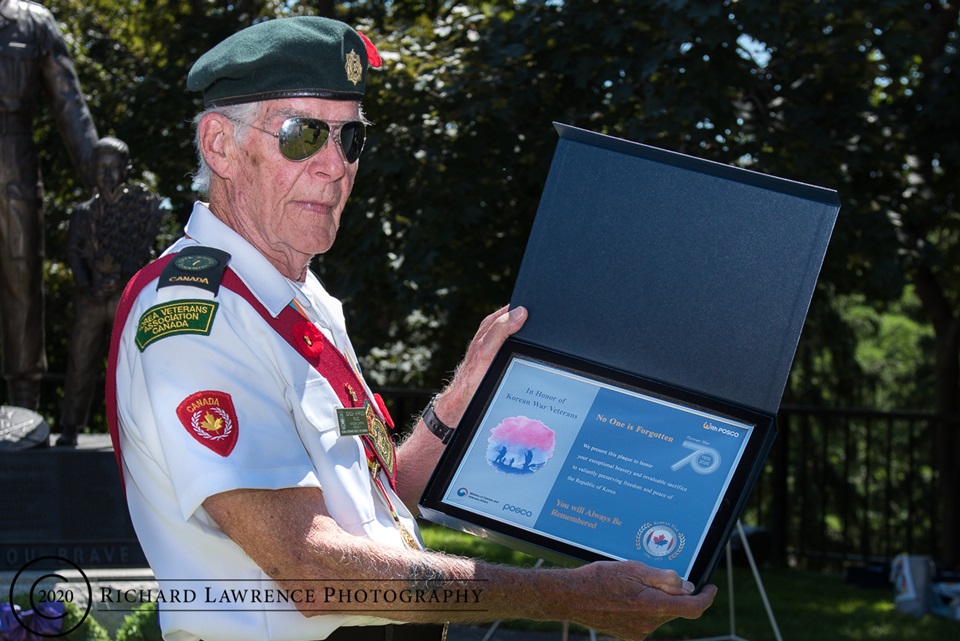 ▲ In June, the Korean Ambassador to Canada delivered appreciation plaques to the veterans who attended the event in Ottawa, Canada. (Image source: RICHARD LAWRENCE PHOTOGRAPHY)

POSCO (CEO Jeong-Woo Choi) presented appreciation plaques to 3,700 veterans from 16 countries over a year to commemorate the 70th anniversary of the Korean War.

To honor and express gratitude for the sacrifice of the Korean War veterans, POSCO planned on creating the plaques of appreciation last year. Despite the various restrictions posed by the COVID-19 pandemic, the plaques were delivered through the corporation and embassies, along with face masks and hand sanitizers.

The plaques were created with POSCO stainless steel and adopted PosART, an eco-friendly color inkjet printing skill. In eight different languages, the following message was carved on the plaques — “No One is Forgotten, You will always be remembered”. While the Korean War is referred to as the Forgotten War, the message on the plaques show POSCO’s determination to never forget these veterans.

On the left side of the plaques, an image of the war situation was overlapped with the Taegeuk pattern, which is a traditional Korean symbol, to commemorate the noble spirit of sacrifice of those who willingly sacrificed for Korea. On the right side, the flags of the 16 countries that participated in the Korean War are displayed together with the Taegeuk pattern and a map of the Korean peninsula. This signifies that although the war took place on the Korean land, now, through cooperation between Korea and the participating countries, it has preserved freedom and peace.

A POSCO official said, “Most of the veterans are currently in their 80s and 90s, and so this could be the last chance to express our gratitude for them. That’s why we tried our best to deliver the plaques to as many veterans as possible. I hope this will be an opportunity to spread the spirit of POSCO’s Corporate Citizenship.”

Since the plaques were delivered to the veterans in each country, over 80 letters of gratitude, sincerely wishing for the prosperity of Korea and POSCO, have arrived from the embassies, veterans, and their families.

The British Embassy in Korea mentioned, “The plaques from POSCO will deeply move the veterans and the appreciation will remain in their hearts. We are grateful once again for honoring the noble sacrifice of the Korean War veterans.”

An elderly veteran, about to be 90 years old shortly, conveyed his gratitude through a letter written by his granddaughter. He wrote, “I had been going through a hard time because of the COVID-19 pandemic. But POSCO’s plaque has presented me with great joy and comfort. I am pleased and encouraged to know that there are those who remember us veterans.”

Meanwhile, POSCO has been delivering appreciation plaques to veterans overseas, starting with the production of medals dedicated to people of national merit since 2013. For some of the 16 nations, next year marks the 70th anniversary of the dispatch to the Korean War. Accordingly, POSCO plans to discuss ways to consistently show gratitude to the veterans with the embassies in Korea.