After being named CEO on March 10, Ohjoon Kwon began his second three-year term by taking steps toward strengthening POSCO’s competitiveness. On March 13, Kwon met with Jeffrey Immelt, the chairman of the board and chief executive officer at GE, to discuss potential partnerships that could add more smart factory solutions to POSCO’s factories. 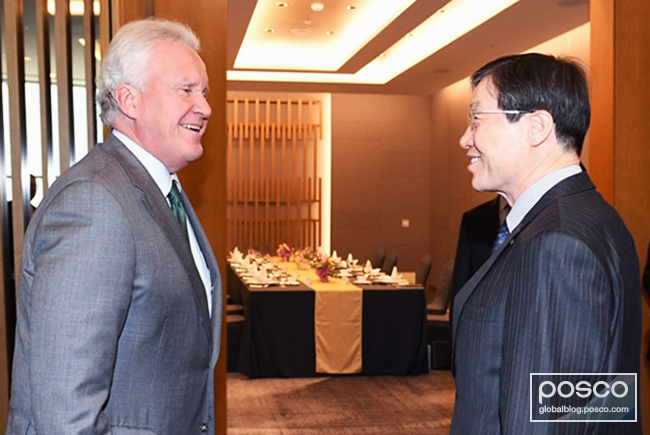 In late February, Kwon made trips to Germany and the US to visit Siemens and GE factories. He met with executives to discuss best practices and share thoughts on potential collaborations. At that time, Kwon and Immelt were not able to meet so they took advantage of Immelt’s time in Korea for a face-to-face meeting.

Kwon and Immelt discussed different ways that smart technologies could be incorporated into POSCO’s steel and non-steel factories. By combining GE’s strength in equipment manufacturing and POSCO’s expertise in the steel industry they hope to create more advanced smart industrial solutions. POSCO, in particular, was looking to introduce smart features to their material, energy, and construction businesses through this partnership. 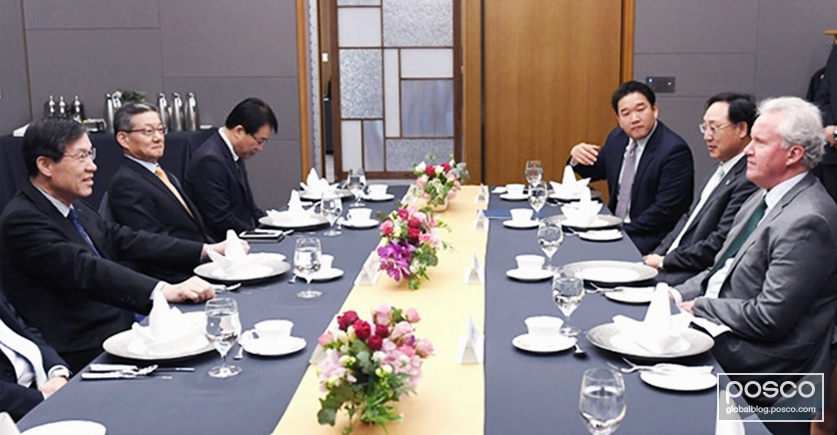 After meeting with Immelt, Kwon left for Indonesia to attend the Korea-Indonesia Economic Development Forum in Jakarta. Kwon also visited PT Krakatau POSCO, located in Cilegon, and encouraged field employees to continue their hard work to strengthen their competitiveness in the region.

PT Krakatau POSCO is POSCO’s first overseas integrated steel mill and is capable of producing a total capacity of 3 million tons. Since 2013, it has cut down on operating losses and increased its competitiveness through innovative cost-reduction activities and new technology integration.

Last year, the overseas steel business division’s operating profit reached KRW 218.2 billion, up by KRW 648.1 billion from 2015. This is a result of increased sales of high-margin products and intentional efforts to cut costs.

POSCO plans to focus on strengthening its financial structure by increasing the sales of its World Premium Products. Through this effort, they hope to continuously expand their presence in overseas steelmaking while optimizing the process of locally sourcing product materials.