After his nomination in January, POSCO CEO Ohjoon Kwon was officially reappointed to a second three-year term as CEO at the 49th general meeting of shareholders on March 10 at POSCO Center.

In addition, President In-hwan Oh and Vice President Jeong-woo Choi were re-elected as inside directors at the general shareholders’ meeting, and Vice Presidents In-hwa Chang and Seong Yu were newly appointed as inside directors. Those appointed as new outside directors were Shin-bae Kim, former vice chairman of SK Group; Seung-hwa Jang, a professor of law at Seoul National University, and Moon-ki Jung, an associate professor of Business Administration at Sungkyunkwan University.

During his first three-year term that began in 2014, Ohjoon Kwon worked to enhance the corporate structure and profitability by focusing on strengthening POSCO’s core competitiveness as a steel company, its financial soundness, and group restructurings for his first three years in the role.

Kwon, who worked as CTO (Chief Technology Officer) before becoming the CEO, is a steel technology expert who has previously served as the director of the Technology Research Center and director of the Research Institute of Industrial Science and Technology. Under his leadership, POSCO secured exclusive technology competitiveness and also moved forward with its Solution Marketing offerings that combine hardware, steel products, software integration and application technology, commercial support, and human solutions.

POSCO significantly drove up its operating profits by 19% to KRW 2.6 trillion at the end of last year from KRW 2.2 trillion in 2013, Kwon’s first year as CEO. During the same period, its operating profit ratio also increased from 7.3% to 10.8%, POSCO’s first double-digit operating profit ratio in five years. Since Kwon’s inauguration as CEO, a total of 126 restructurings have been implemented to achieve a cumulative financial improvement of KRW 5.8 trillion by the end of last year. Its debt ratio stood at 17.4 percent, the lowest level since the foundation of POSCO. 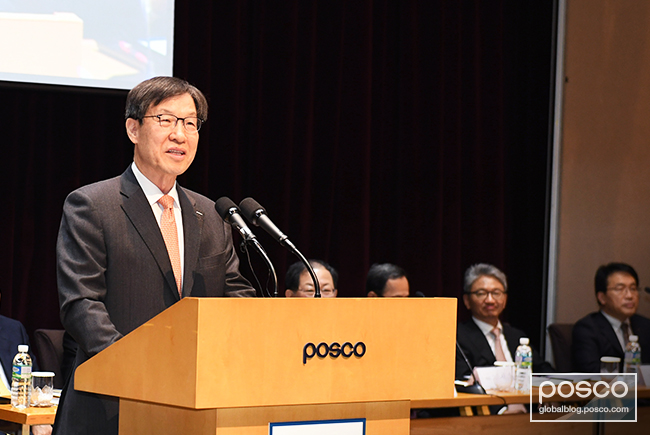 “With a low growth rate, higher raw material costs, and the spread of protectionism throughout the overall domestic industry, we are facing a tough business environment,” CEO Kwon said at the general shareholders’ meeting. “But we will lay the foundation for future growth and strengthen the profitability of steel.”

To this end, Kwon laid out his vision for the future to:

Outside director Shin-bae Kim is a high-profile IT business entrepreneur who served as president of SK Telecom and vice chairman of SK C&C. Due to his excellent management skills, he was promoted to become a vice chairman of the SK Group.

Outside director Seung-hwa Chang is a professor of law at Seoul National University. Previously he served as a judge of the Seoul District Court and also worked as a lawyer in the United States. As a specialist in international trade law, he worked as an arbitrator for the International Court of Arbitration and was appointed as the first Korean judge of the WTO Appellate Court.

Outside director Moon-gi Jeong is an Associate Professor of Business Administration at Sungkyunkwan University. Jeong worked at Samil PwC as a member of the Financial Supervisory Service’s Accounting Review Committee for many years and has served as the Vice Chairman of the Korean Accounting Society.

At a Board of Directors meeting held after the general meeting of shareholders, POSCO elected outside director Byoung-won Park as chairman of the Board of Directors. In-hwan Oh and Jeong-woo Choi were appointed as new presidents.