At the CEO Forum held in Seoul on March 30, POSCO CEO Ohjoon Kwon announced a new strategy to increase POSCO’s operating profit from KRW 2.8 trillion to KRW 5 trillion. The new strategy is also expected to boost sales of future businesses to KRW 11.2 trillion by 2025.

The key components of POSCO’s new strategy include strengthening POSCO’s World Premium Products, improving the profitability of its non-steel businesses, investing in future growth engines, and introducing smart technologies to its group businesses. 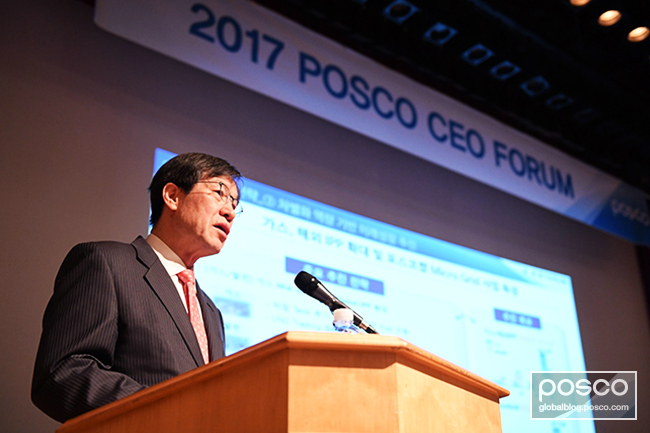 Kwon announces a new strategy and the preliminary first-quarter earnings report at the CEO Forum that was held in Yeouido, Seoul, on March 30.

As for future growth areas, POSCO will push to supply energy storage materials, such as lithium and nickel, using proprietary technologies that extract lithium from salt water or recycled batteries and that refine nickel using low-grade nickel ores. Other key future growth businesses include the production of titanium and magnesium sheets, which are expected to be used in aerospace materials and in luxury cars. POSCO is also planning to expand its natural gas storage and overseas IPP (Independent Power Producer) businesses while continuing to push ahead with its new and renewable energy businesses. By investing KRW 2.5 trillion in these new growth engines over the next three years, POSCO hopes to achieve their goal of KRW 11.2 trillion by 2025.

Aside from pursuing new growth engines, POSCO aims to increase profits from KRW 600 billion to KRW 1.5 trillion in its non-steel businesses by restructuring to focus on its more lucrative businesses. Additionally, POSCO plans to incorporate smart technologies into its group businesses (POSCO E&C, POSCO Energy, and POSCO ICT) and establish a new group-level business platform. 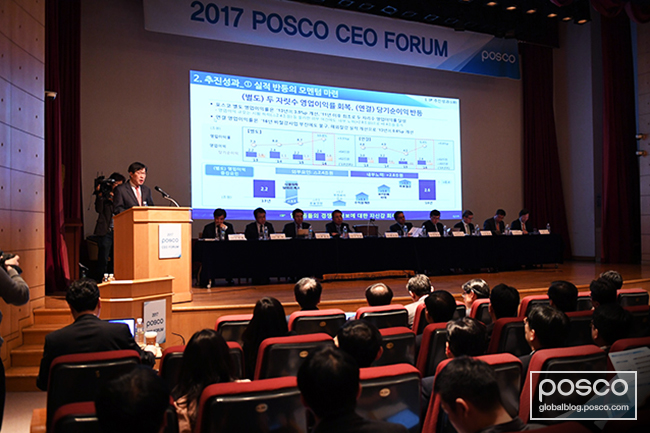 CEO Ohjoon Kwon pledges to double operating profits in three years through the strengthening of both of its steel and non-steel businesses.

In 2014, when Kwon was inaugurated as CEO of POSCO, there were many difficult market conditions both at home and abroad, such as the increasing global oversupply of steel and sluggish industrial demand. Despite these market conditions, POSCO was able to achieve a double-digit operating margin by reducing KRW 1 trillion in costs, restructuring the company, and recording the lowest debt ratio in its history.

POSCO is seeking to create a more balanced portfolio of steel and non-steel businesses as well as domestic and overseas businesses. The company is working to find ways to transform itself into a flexible and advanced enterprise by introducing more smart technology solutions to its existing business areas.